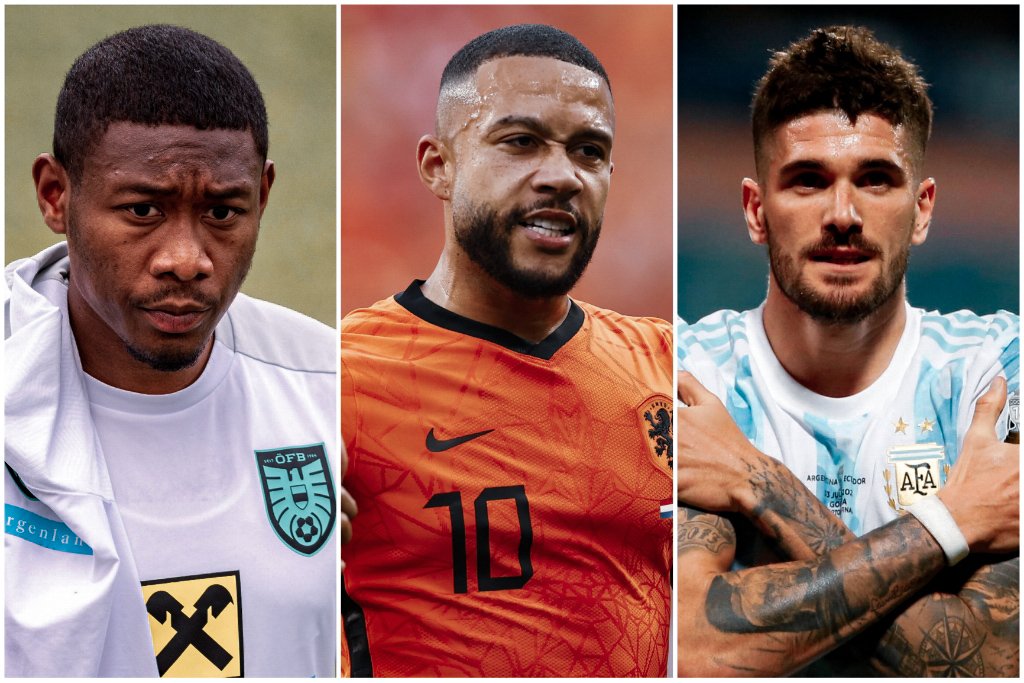 Following all the excitement of the Euros and Copa America, the focus returns to all the clubs across Europe, which are making moves to better themselves for the upcoming campaign. July is almost coming to an end, and big names such as Sergio Ramos, Sergio Agüero, and Jadon Sancho have already made moves and are set to don new colours.

The 2021 summer transfer window entails excitement and intrigue – as it always does – but also new market conditions due to the ongoing COVID-19 pandemic. Now, (most) clubs are forced to be more frugal and offer out-of-the-box solutions like transfer fees plus player swaps.

This is especially the case in Spain, where giants Barcelona and Real Madrid are more fiscally reserved than ever before. If the two clubs want to bounce back from underwhelming seasons, there’s plenty of work to be done. Meanwhile, defending champions Atlético Madrid are also bolstering their ranks, hoping to repeat last season’s success.

With that in mind, let’s take a closer look at how Spain’s big three are preparing for next season.

In many ways, Barcelona’s 20/21 campaign ended where it started: with disappointing performances highlighting a myriad of on-the-pitch issues. However, there were still positives in the rough season that, coupled with proper reinforcements, could make the team a real force again.

Their aims in the transfer market are relatively straightforward, albeit easier said than done. The Blaugrana have to bring in reinforcements for various positions – and for virtually nothing –  and offload players deemed surplus to requirements. The former is made difficult by a lack of transfer funds and the latter due to players on high deals. Still, while it is a daunting task, Joan Laporta and his team have gotten off to a solid start.

Agüero, who reportedly signed for significantly less than he was earning at Manchester City, was brought in to provide a new dimension up front, although without the expectations (or burden) of being a starter.

At 27-years old, Depay is entering the prime of his career and represents a potentially dominant signing for the Catalans if he can continue his hot form for Lyon and the Dutch National team. The versatile forward has tallied 37 goals and 15 assists over the last two club seasons. Also, there is plenty of hope that Depay will excel under Ronald Koeman like he did when he coached the Oranje. After all, if Koeman helped bring out the best in Frenkie de Jong, can Depay be next?

Youngster Eric Garcia is about as experienced as they come for a 20-year old, having featured in the Premier League, Champions League, and ongoing European Championship. The ex-La Masia centre-back will help the team’s shaky defence but is still one for the future.

Last but not least, Barça paid Real Betis nine million euros to retain the full rights to Emerson Royal, the Brazillian right-back who will provide competition for Sergiño Dest. While only two years older than his American counterpart, Emerson has a more-polished game defensively. In all, the 22-year old’s arrival ensures solidity and a bright future to a right-back position that has underwhelmed in past years.

The four aforementioned signings give Barça much-needed cover and reinforcements in the back and frontlines, although there are still a few more holes in the squad that have to be filled. Laporta has promised three or four more signings, and the team can use a new centre-back, left-back, midfielder, or forward. However, more arrivals will not come without some departures.

As of now, Barcelona have either sold or released three players – not counting free agent Lionel Messi who is expected but still yet to sign an extension. Brazilian midfielder Matheus Fernandes was released after a season where he made only one 17-minute appearance; loaned-out left-back Juan Miranda was signed by Real Betis, and Jean-Clair Todibo was bought by French club OGC Nice for around 8.5 million euros.

Out-of-favour left-back Junior Firpo sealed a move to Leeds United, while Carles Alena has also made his way to Madrid to represent Michel’s Getafe side. Elsewhere, the Catalans have recently loaned out Francisco Trincao to English side Wolves, hoping the young Portuguese winger can fulfil his promise.

Additionally, there is constant speculation claiming that the club is set to offload Miralem Pjanic and Samuel Umtiti in whatever way possible. At the same time, Philippe Coutinho is also considered expendable, and Antoine Griezmann headlines the news in a potentially sensational swap deal with Atletico with Saul Niguez perhaps on his way to Catalonia.

Looking ahead, one can reasonably expect more moves from the Blaugrana, both in and out, considering their urgent need for reducing the overflowing wage bill and recouping some funds.

Similar to their biggest rivals, Real Madrid find themselves in financial dire straits. While they once dreamed of signing Kylian Mbappe this summer, things will likely turn out different.

The arrival of a new coach, far fewer moves in the market than the Galacticos might have hoped for, the loss of their captain and perhaps greatest ever defender, coupled with an ageing core, could spell a lot of trouble for Real Madrid in the season ahead. There is more uncertainty than ever in the Los Blancos ranks, and their president Florentino Perez has been grabbing all the wrong headlines lately.

One of Madrid’s biggest arrivals comes off the pitch in the form of a new manager. After a tumultuous last season, Zinedine Zidane decided to leave his post as Real Madrid manager for the second time. But, this time feels more permanent. President Florentino Perez resorted to a safe yet solid replacement with Carlo Ancelotti. The Italian coached the team from 2014 to 2015 and helped them lift their tenth Champions League title.

Another arrival is David Alaba, the ex-Bayern Munich defender who was signed to a reported five-year deal. As one of the most versatile players in the world, Alaba will help Los Blancos in a plethora of ways. The Austrian was at the heart of a reported tussle between Real and Barcelona, but the latter’s financial woes allowed their eternal rivals to secure Alaba’s services easily.

Furthermore, Madrid will be supplemented by the returns of Gareth Bale and Martin Odegaard. Both were loaned to North London (Tottenham and Arsenal, respectively) this past season, but their continuity remains unclear.

In addition to losing Zidane, Madrid will be without their captain and leader, Sergio Ramos, for the first time in 16 years. The centre-back is reportedly on his way to Paris-Saint Germain after an injury-riddled season and is leaving on a free transfer.

Ramos’ long-term partner in the backline, Raphael Varane, is also set to depart the Spanish capital. Reports state that the World Cup winner is close to signing with Manchester United, as his contract expires in 2022. In need of a long-term centre-back, Madrid could turn their eyes to Sevilla’s Jules Kounde, who has also been targeted by Barcelona.

While nothing is official, Madrid reportedly have plenty of players they are looking to offload, including Dani Ceballos, Luka Jovic, and Brahim Diaz.

In all, without Zidane, Ramos, and Varane, Real Madrid will lack leadership and poise, not to mention lose plenty of quality. The question is, who will step up?

Out of all the teams on this list, Atlético Madrid will likely have the least turnover and most consistency heading into next season. For the most part, their core remains intact, and new signings are merely complementary pieces. Still, that is not to downplay their importance.

Los Rojiblancos’ biggest arrival is Udinese’s Rodrigo de Paul for 35 million euros. The Argentine is a complete midfielder who will fit perfectly into Diego Simeone’s system, adding much-needed creativity and an extra dimension from the middle of the park. The 27-year old is coming off a dominant season in Italy, tallying nine goals and 12 assists.

The 27-year old was at the heart of the Argentina midfield, dropping one masterclass after another as La Albiceleste secured their first Copa America title since the 1990s. De Paul was immaculate throughout the tournament and acted as one of the key supporting acts to Lionel Messi, en route to international glory.

The physical yet equally technical midfielder looks like he could be one of the signings of the season and will go a long way in bolstering the Atleti midfield.

The defending champions are also reportedly close to signing Marcos Paulo, a young Brazilian centre-forward who will likely be loaned out or have a spell with the youth team.

In terms of departures, Atlético are losing Moussa Dembele and Lucas Torreira as they return on loan from Lyon and Arsenal, respectively. Centre-forward Alvaro Morata is also set to extend his loan with Juventus for another season.

On a permanent basis, there are reports that centre-midfielder Saul Niguez could be on his way out of the Spanish capital, especially as Rodrigo de Paul was recently brought in. The Spaniard is garnering plenty of interest from various Premier League clubs, while the obvious headline-grabbing swap deal with Barcelona could very well yet materialise.

Along the same lines, right-back Kieran Trippier is rumoured to be eyed by Manchester United. However, Altético may not want to lose one of their most important players so easily. Out-of-favor centre-forward Vitolo could also leave as his contract expires next summer.

With a little under two months left in the transfer window, moves will only increase from here. Spain’s “big three” have made plenty of transfers already, although Barcelona, in particular, will continue to try and offload more players, Real will hope to bring in more, and Atlético will want to keep their core intact.

There will be new faces in new teams, but one thing is for sure: another exciting season awaits.