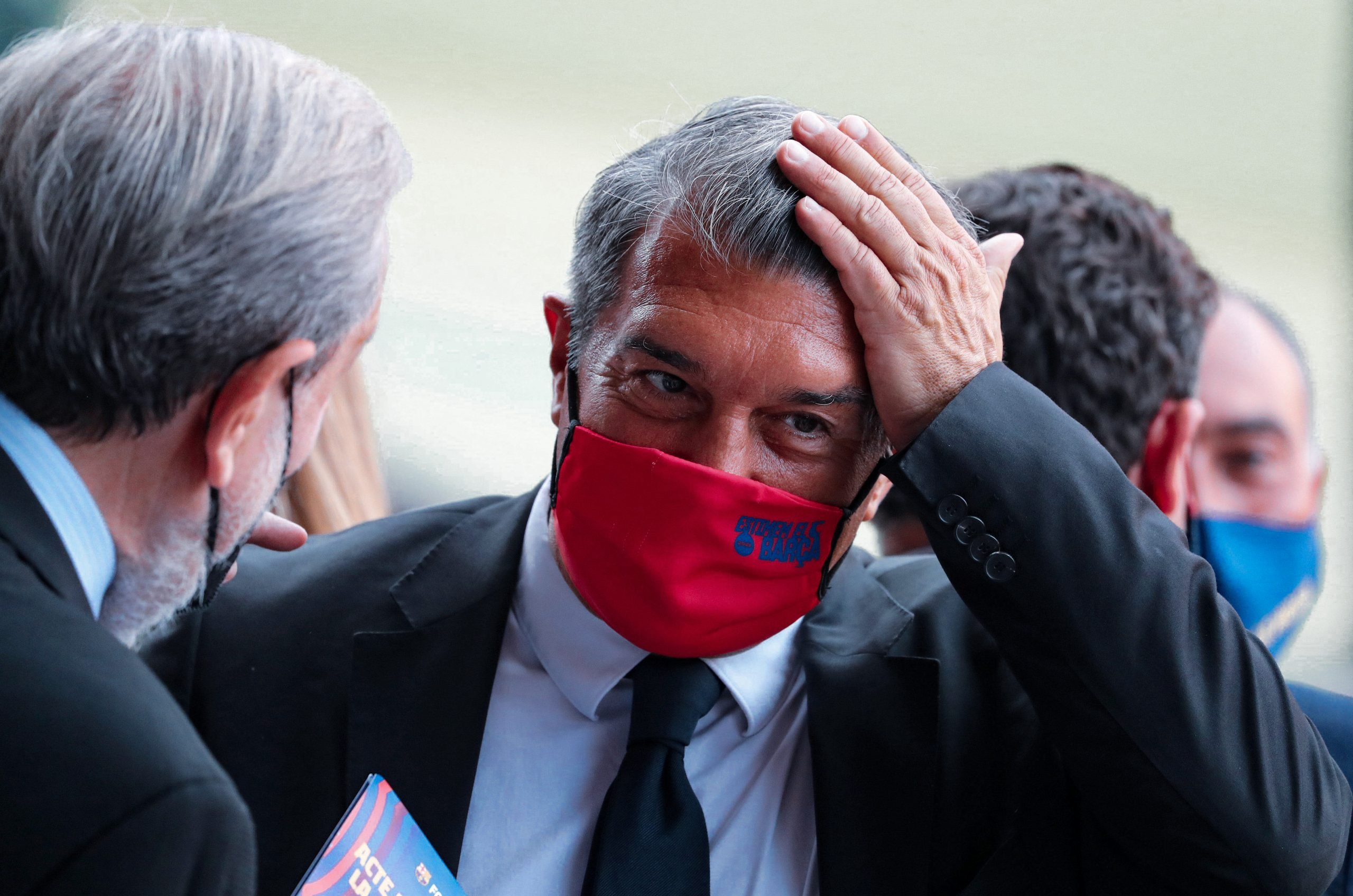 “Apart from the signings that we have already made, we will make 3 or 4 more signings. We want to create a very competitive team.”

Speaking in an interview some moons ago, President Joan Laporta’s comments turned the heads of culés worldwide. Having already secured free agents Sergio Agüero, Memphis Depay, Eric Garcia, and spending only €9 million for Emerson Royal, the prospect of even more signings is beyond intriguing. The question is, with the club’s financial situation reportedly “worse than expected”, who can they sign?

Rather than hopelessly speculating about signing players like Erling Haaland or Matthijs de Ligt, the following article will look at more realistic options that make sense both financially and positionally. Specifically, we will take a look at the four positions that need the most attention, and fill in some names that could fit that need.

While Barça’s squad is far from being all-around world-class, a complete rebuild isn’t necessary immediately. The Blaugrana boast an admirable mix of promising youngsters and vastly experienced veterans but lack world-class players (in their primes) in key positions. As such, there are gaping holes in the squad that have to be filled.

If Laporta is eyeing four more signings, that objective fits perfectly with the team’s and Koeman’s biggest concerns: centre-back, left-back, central midfield, and the wings.

Out of the four positions Barcelona need to strengthen, the centre-back is inarguably the most important. After all, as the old adage says, “attack wins you games, defence wins titles.”

The Catalans’ defence has struggled in recent memory, both on an individual and team basis. They have succumbed to countless individual errors, lapses of concentration and are overall disjointed as a unit. Youngsters Ronald Araujo, Oscar Mingueza, and newcomer Eric Garcia have yet to prove themselves as reliable starters week-in and week-out, while Gerard Pique, Samuel Umtiti, and Clement Lenglet are not the players they once were.

Admittedly, Lenglet had his first subpar season with Barça, and the youngsters have shined in moments, but the need for a world-class option remains clear as day.

In terms of a player profile, Barcelona need what almost every club is after. That is, a leader in the backline who is not only dominant defensively but comfortable in possession. With Barcelona’s possession-based approach, the ball-playing abilities of their centre-backs allow them to patiently build-up from the back, ensuring control and opportunities to exploit high-pressing opposition.

When in attack, the two (or three) centre-backs help recycle possession and make passes into the final third, serving as extra passing options and threats.

Nonetheless, ability in possession hasn’t been the shortcoming of Barça’s defence – rather, the act of defending itself. As of now, their options are plagued by inexperience, a lack of form and are simply not the level they once were (Pique and Umtiti in particular), making them exploitable to quick transitions and one-on-one matchups. To solve these issues, the club needs a player who offers a stellar reading of the game, positioning and is dominant in both ground and aerial duels.

There are plenty of potential dream signings, but Barcelona have been linked with only a select few centre-backs. Amongst them is Manchester City’s Aymeric Laporte and Inter Milan’s Alessandro Bastoni.

Bastoni, only 22-years old, had an impressive season with Serie A champions Inter Milan and could anchor the defence for years to come. He’s uncharacteristically quick for a centre-back, excellent on the ball, but is yet to prove himself out of a back-three. That said, given Inter’s financial tragedies and a couple of great defenders in Milan Skriniar and Stefan de Vrij, Bastoni could be forced towards the exit door.

In many ways, Laporte is exactly what the Blaugrana need, representing a world-class option in the prime of his career (27-years old). The Frenchman-turned-Spaniard would bring much-needed leadership, composure, and stability to a shaky backline. However, given his age and form, it is impossible to sign him this summer unless Barcelona can offer a fat stack of cash to City

In terms of facilitating these moves, rumours state the necessity for a “swap deal” or player exchange to ease the financial burden.

Continuing with the backline, one of Barça’s most pressing concerns is (albeit surprisingly to some) left-back. With a target of “four more signings”, a long-term replacement for Jordi Alba must be addressed.

While the Spaniard has undoubtedly stood out in an era full of attacking full-backs, at 32-years old, the club has to act sooner rather than later. Still, replacing Alba’s contributions in the attacking third will be difficult, even if Barça need more defensive stability. To elaborate, Alba has a staggering 45 goal contributions over the last three seasons, but he is often on the receiving ends of unforced errors as well.

Attacking full-backs are key to the Blaugrana way, providing width for forwards to drift centrally and being outlets for passes and crosses into the box. With Ronald Koeman’s implemented 3-5-2/3-4-3 formation, the full-backs are even more crucial as there are no wide players in front of them.

Thus, Barcelona will naturally target left-backs who are adept in the offence. On the other hand, at this point, defensive acumen is almost more important.

In terms of options, one name reigns supreme: Valencia’s José Gayà. The 26-year old may not quite match Alba offensively– frankly, very few in world football do – but he is still a threat in the final third and better defensively.

Besides being an ideal replacement, the links between him and the club have ramped up in the last few weeks. In fact, Valencia reportedly have their eyes on Martin Braithwaite and Carles Alena to help push the deal through.

On the surface, Barcelona’s midfield looks covered with (notwithstanding the likely departing Miralem Pjanic) Frenkie De Jong, Sergio Busquets, Pedri, Riqui Puig, and Ilaix Moriba, albeit quantity is not quality.

In frankly too many decisive matches last season, the Catalan midfield was overrun and second-best. Not to mention, Koeman’s insistence on a lack of rotation came back to haunt the team at the tail-end of the campaign. Although de Jong, Busquets, and Pedri developed a formidable partnership, the midfield still lacks experience and depth.

It goes without saying, but as a possession-based side, a dominant midfield is crucial. Whether in a 4-3-3 or 3-5-2, Barcelona often lineup with a midfield trio with distinct roles. Busquets forms the base of the trio as the “number 6”, responsible for covering the backline, acting as a “third centre-back” in offence, and linking the defence with the attack.

De Jong is a hybrid box-to-box midfielder and deep-lying playmaker, while Pedri is the “number 8”, tasked with making penetrative passes into the final third and creating chances. Overall, regardless of who slots in the middle of the park, these roles are more or less well-defined.

With that in mind, Barça can benefit from a wide array of players. Specifically, a replacement for Busquets in the centre-defensive mid role or an interior.

One name that has been linked with Barça is Sassuolo’s Manuel Locatelli. The 23-year old Italian is currently impressing on the world stage with his national team in the Euros. Locatelli can serve both as a number 6 and box-to-box midfielder who is a threat on goal, as evidenced by his brace against Switzerland in the European Championship. However, a potential swap deal with Sassuolo seems far-fetched at this point, thus the Catalans might lack the funds necessary to purchase him.

Additionally, Spanish midfielder Fabian Ruiz has been scarcely linked with the Catalans. Fabian can operate as a deep-lying playmaker or in more advanced positions, thus fitting the profile that Barcelona are looking for. After spending three seasons with Napoli, the 25-year old Fabian would bring a more polished game to a relatively inexperienced midfield.

Players on soon-to-be expiring deals can also be prime targets, even though are not linked to the club at this point. This includes RB Leipzig’s Marcel Sabitzer and Manchester United’s Paul Pogba, who fit a need as established and advanced playmakers. They can also play multiple roles, with the former covering as many as six to seven different roles last season, while Pogba plied his trade in the forward line and central midfield.

Last but not least, the fourth position on this list is a forward or winger. Barça have an abundance of attackers, including Lionel Messi (who is likely to re-sign in the coming days), Antoine Griezmann, Memphis Depay, Sergio Agüero, Ansu Fati, Philippe Coutinho, (the injured) Ousmane Dembele, and Francisco Trincão.

Still, they lack natural width, especially if Dembele’s injury keeps him out for longer than expected. Koeman can offset this by playing a 3-5-2 again, although reports state that Laporta wants the manager to revert to a 4-3-3. Ex-La Masia player Adama Traore is the most recent winger linked with the Catalans, but in all likelihood, he would not be a starter.

To conclude, Laporta’s target of “four more players” perfectly fits the club’s positional necessities. Ideally, the club will secure one centre-back, one left-back, one centre-mid, and one versatile forward. At the end of the day, the priority order will come down to Ronald Koeman and Joan Laporta, who will have to discuss the needs of the club. The question, however, is will they be able to offload and sell enough players to gather some cash?