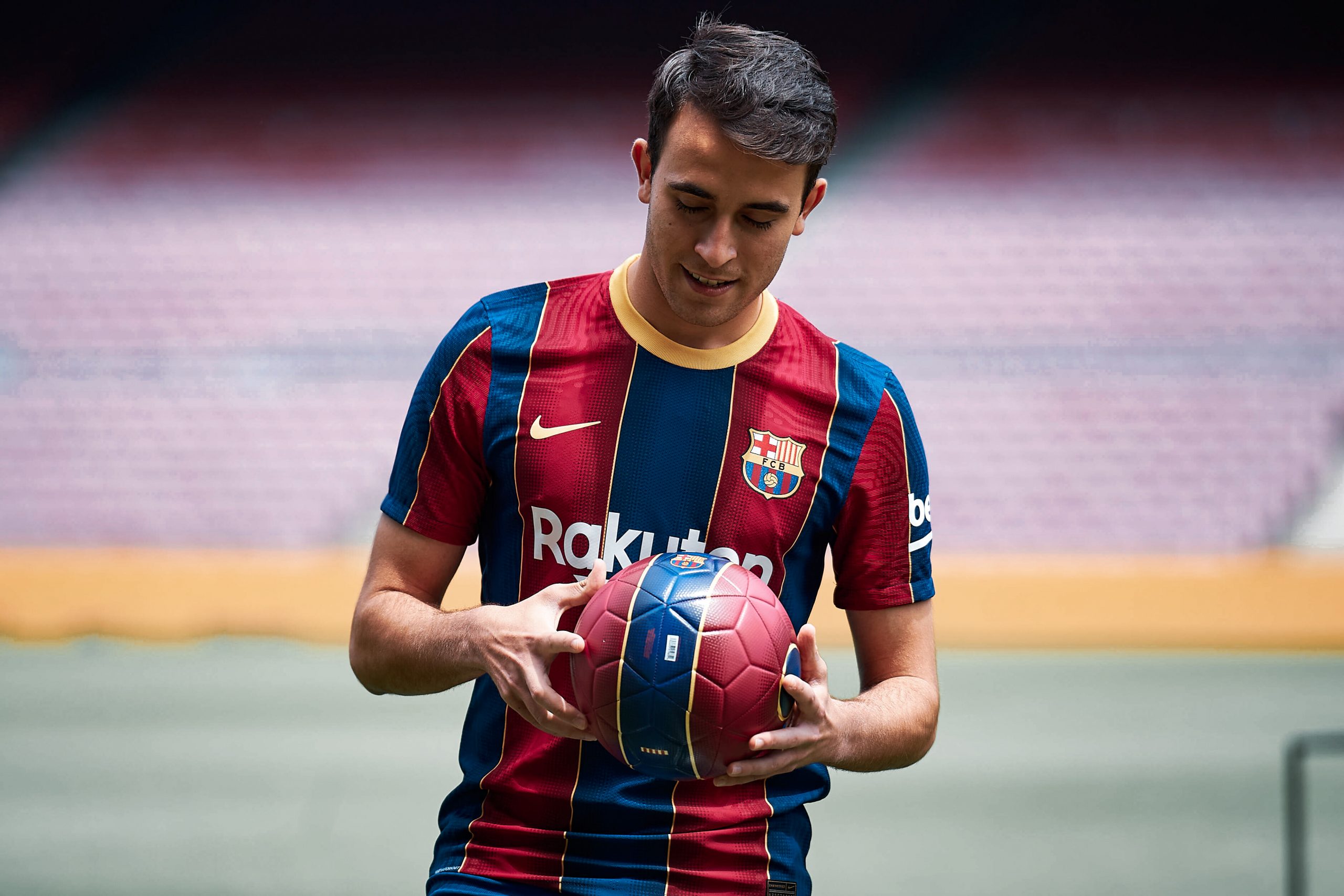 What can Barcelona expect from Eric Garcia? Frankly, a reliable homegrown defender who has the potential to be a starter for the next decade. However, it would be an oversimplification to say that is all he is. In Eric Garcia, the coach has a voice on the field, the players have a leader to look towards, and the fans have a talisman to cheer for.

Born in Barcelona, Eric Garcia Martret started playing for the Catalans in 2008. Amusingly, the team he played for before joining Barcelona’s Benjamin B team was simply named ‘Dani Alves’. A leader from a young age, he idolized Carles Puyol and Javier Mascherano. However, he progressed rapidly alongside one of his closest friends, Ansu Fati. In fact, he progressed more rapidly. The young defender started in the UEFA Youth League semi-final victory over his future club at just 16.

His performances with Spain’s national teams have been very dependable. Euros winner, World Cup runner up with the U17s, and winner of the Euros with the U19s. He already has 7 appearances for Spain and has been called up to the Euros taking place in June. Coming into the national team at the age of 19 and imposing yourself is, of course, a herculean task. However, Garcia has always had the coach’s faith, as we shall see in this article.

The prodigal son’s return was in the works for a while now. If not for financial complications, Garcia could have arrived in the recent winter break. But finally, on the first of June, 2021, Eric Garcia was officially announced as a new Barcelona player.

An overview of Eric Garcia

A right-footed centre-back, Eric Garcia’s attributes make him perfect for a team that plays possession-based football and builds up from the back. Most often, the teams he has played in have lined up in some variation of a 4-3-3. In the Spanish system, and often under Guardiola at City, some aspects remain the same.

For example, the defensive midfielder will provide cover to the centre-halves, and the defense will maintain a high line. Most of the time, the team will look to play short passes rather than launch the ball forward. These elements of the team’s style of play are the ones Garcia is similar to, having trained at La Masia for seven years.

This is not to say that he is unable to perform in systems that differ. For example, at times, Pep Guardiola has played him as an auxiliary full-back. In this system, Garcia would then be the left centre-back in a back three. This small change in the full-backs position alters the players’ roles and challenges their understanding of the game. However, as long as the team’s basic principles remain the same, the young Spaniard can adapt.

Statistically speaking, according to FBRef, Eric Garcia is most similar to Clement Lenglet and Ruben Dias, with players like Aymeric Laporte and Alessandro Bastoni showing statistical similarities as well. It’s not hard to see why, though. Garcia ranks amongst the best in his passing ability. Below, we have some statistics illustrating just how good he is when compared against other centre-backs.

Granted, the sample space of 600 minutes isn’t the largest. But his passing and technical ability are apparent when he plays. Incredibly comfortable on the ball, he showcases a great passing range. In addition, his control over the trajectory and swerve is awe-inspiring, which leads to him being amongst the best in every passing range.

The 20-year-old is a proactive player. He tends to carry the ball forward as much as possible, akin to Gerard Pique. Garcia’s statistics with regards to possession are shown below. According to FBRef, he is amongst the top players compared to defenders in terms of dribbling and carries. This was especially apparent at Manchester City, where he would often carry the ball and thread a ball through, eliminating 2-3 players in the process.

His judgment when it comes to the opposition’s momentum and balance is something that helps him in both defense and offense. Unfortunately, this proactivity seems like a necessity rather than a choice when defending at times, which is one of his biggest weaknesses. Maintaining a high line is walking a tightrope. Timing and anticipation have to be flawless. As a result, Garcia struggles in 1v1s and against strong, pacey dribblers.

His style of defending is to intercept the ball before it reaches the target or try and stop the attack before it even begins. This is not to say that Garcia shies away from a good hard tackle. Rather, he is the embodiment of what Paulo Maldini said. “If I have to make a tackle then I have already made a mistake.”

Why does the team need him?

Eric Garcia is a fascinating young talent. But does Barcelona need him? And if so, why? Let us take a look at Barcelona’s statistics in La Liga this season. 7th lowest xGA, which isn’t bad at all. Taking a look at the two clubs from Madrid, each at least conceded 10 goals less. The most revealing part, however, is the difference between xGA and the actual goals conceded. Considering Real Madrid and Atletico Madrid, both the teams conceded around 10.7 goals lesser than the expected tally. Barcelona? Just two.

This might seem to be nitpicking because Barcelona conceded a goal per 90, not more than that. But the defensive frailties have been visible throughout this season and the previous few. The gap in the xGA and GA goes to show us exactly how weak the defense and goalkeeping have been. Granted, it is finally up to the goalkeeper to save the shot. But it’s the defenders’ job to make it as hard for the strikers to score as possible, in other words, reducing their xG as much as possible.

Gerard Pique, a Barcelona legend, is past his prime. Clement Lenglet is arguably inconsistent. Oscar Mingueza and Ronald Araujo are the other two options Barcelona have. In Eric Garcia, Barcelona have a player who is used to playing at a high level, with both club and country; he is a natural leader. There are many technical and technical aspects in which he outshines both Araujo and Mingueza. Those two do have the edge over him in some aspects, though, especially pure defending, which is naturally crucial, and in 1v1s. Despite this, it is hard to turn down what Garcia offers.

It is pretty well-known by now that he is essentially the coach’s voice on the pitch. This is apparent for both Spain and Manchester City. Pep Guardiola has said he would love to have fifteen Eric Garcias. Luis Enrique has trusted the Barcelona-born defender from the very first time he was called up. The trust the coach’s place in him is clear and unhampered, indicative of his understanding and intelligence.

Taking this into account, it is very likely that Garcia would immediately become a favourite in the dressing room and within the technical staff. Even considering his defensive issues, as a whole, he presents a player tailor-made for Barcelona. Though he struggles in certain situations often, altogether, Garcia is a solid defender and is very good for just 20 years of age. He is just going to keep on improving, both technically and mentally.

Not only does he offer a great chance for the new President to show his commitment to La Masia, Cruyffian footballing, trusting in the youth, but he also brings a different conglomeration of abilities to Barcelona, one that is low-risk, high-reward.

Eric Garcia’s strongest traits are his reading of the game, intelligence, and pure technical excellence and polish. This could turn out to be one of the smartest moves in the transfer market in the coming decade for a free transfer. Not only for Barcelona but any club, a young, promising player with a pure passion for the club in his veins is a priceless asset. Though Barcelona have the environment he needs to excel in; even if he fails, the financial detriments are minimal.

Altogether, Eric Garcia is a signing for the long-term, and one with little risk. Regardless of the manager, he has the ability and conviction to succeed in his hometown. In the worst case, Barcelona will end up making a small profit. But in the best? We just witnessed the homecoming of the next generation’s leader and Barcelona’s potential future captain.