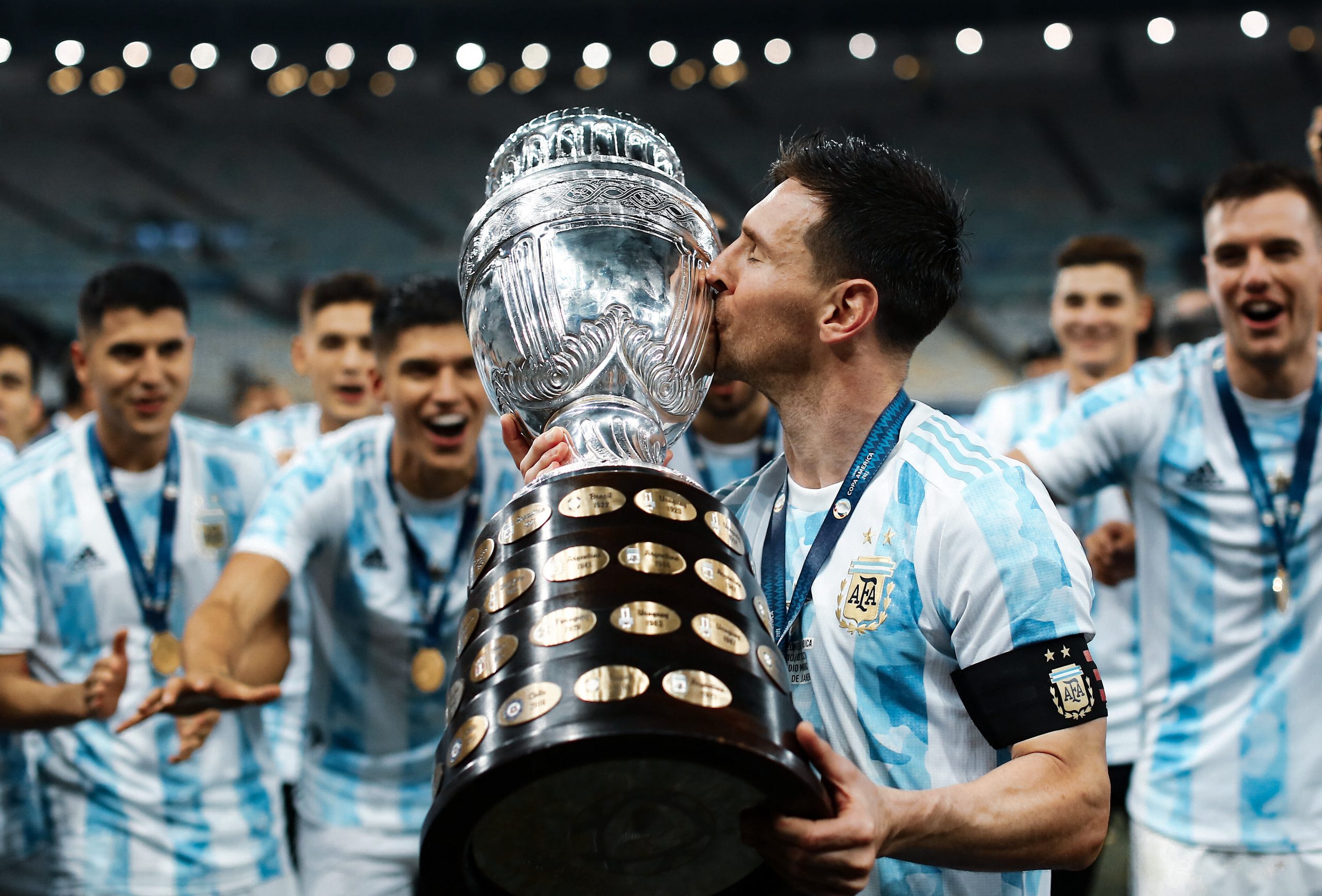 On the back of Argentina’s triumph over Brazil in the final of the Copa America, a question for the ages is making its rounds on the interweb: is Lionel Messi now the best footballer of all time?

Over the course of the last decade, the Argentine’s most devout supporters and those of his arch-rival Cristiano Ronaldo have been at each other’s throats, arguing over who between the two is the better player. By mere virtue that the pair have incomparable profiles, the argument over who is better always has, and will forever continue to be, an apples to oranges comparison.

Yesterday’s title-winning match against Brazil served to “restore parity” in some people’s eyes, but in this article, Barça universal explores why winning silverware at the international level changes nothing about Lionel Messi’s status in football.

Separating the individual from the team

Before even getting to the nitty-gritty subjects, one first has to understand precisely what a team is. As was defined by Leigh Thompson, a professor at the Kellogg School of Management, “A team is a group of people who are interdependent with respect to information, resources, knowledge and skills, and who seek to combine their efforts to achieve a common goal.”

The word team itself is loosely synonymous with that of a group, but the two cannot be used as interchangeably as people think. Every team is composed of a group of individuals, but not every group of individuals is capable of forming a team. As Johan Cruyff put it, “Get the 11 best players for every position, and you’ll end up not with a great eleven, but with eleven strong 1s.”

Having eleven footballers on a team sheet does not necessarily make them a team. The discerning factor between a mere group and a cohesive team is that the latter will have individuals whose skills complement one another, with everyone working symbiotically, seeking to get the best out of each other in pursuit of a unified objective. In functional teams, the strengths of the individuals are accentuated to the same lengths and proportions that their weaknesses are mitigated.

Such interdependence requires synchrony and the utmost effort from everyone involved, lest the collective structure fall apart like a house of cards. A lack of cohesion will translate to the team sinking in the mire of its own failures.

When it comes to football, brilliance on one end can be declared null and void by incompetence on the other. At a club like Barcelona, for instance, pressing begins from the highest line. If the press is ineffective, or as has been the case in recent years, borderline inexistent, then the midfield and defence will suffer tremendously. Concurrently, a forward line that scores three goals a game needs a defence that will concede less. Ineptitude from one part of the team invariably comes at the detriment of all involved.

Different blocks of the team make each other better, but the team being brilliant does not translate to the individuals being the most adept at performing their craft. A collective structure that is capable of fashioning goal-scoring opportunities and mitigating defensive errors does not necessarily mean that the individuals in these teams are the best in their craft but that they help each other realise their potential and go well beyond their personal limitations.

The same could be said the other way, where individual brilliance can often find itself nullified by the weaknesses of the methods implied by the group.

The notion that one footballer is better than another simply on the basis that the former’s team has been more successful than the latter is a logical fallacy. One team is better at finding solutions than its counterpart because their manager had better tactics and was capable of creating better synergies to maximise on strengths whilst limiting obvious weaknesses. It does not suddenly mean that collective silverware improves an individual’s quality. This never has and never will be the case.

Andre Gomes won the European Championship with Portugal in 2016, and Olivier Giroud was triumphant two years later when France conquered the world. Did they become any better than Luka Modric or Robert Lewandowski respectively simply because their teams won such illustrious trophies? Of course not.

Collective accolades are just that; accolades that belong to the team, not an individual. That the Pole’s best finish with his national team was a quarterfinal exit against Portugal in 2016 (a game in which he scored) neither adds nor detracts from his value as an individual.

Teams and individuals have never been one and the same, and unless a reform by football’s governing bodies make it possible for a one-a-side “team”, then this will never be the case.

How individuals should be regarded

Evaluating just one footballer from a team is difficult, as a plethora of determinants go into every single performance. The coach’s tactics, fitness levels, adversity faced, among a host of other variables, all impact how well one performs for their side. Notwithstanding, there are several factors one should watch out for when looking at individuals in the dynamics of a team.

One of the first would be the quality of the player’s work. Two strikers in the same team, with the same tactics, are, at the end of the day, still two strikers. The tasks bestowed upon them are the same, though the efficiency implied will never be equitable.

A perfect example at Barcelona would be that of Lionel Messi and Antoine Griezmann. Both players are situated in a similar position for their side – in the hole -, however, while tasked with executing the same duty, there is a clear and obvious divide between the individual levels of both players.

In all things pertaining to his forward role, the Argentine exhibits a higher level than his French counterpart. He has a much stronger presence in his team, allowing him to effortlessly form bonds with his teammates. His finishing and chance creation abilities are a step above Griezman’s, regularly ending campaigns with double the overall output. In terms of his dribbling, Messi is vastly superior, both in the quality and quantity of his runs, with the ball essentially glued to his feet.

Moreover, an individual should be able to show commitment to their own personal growth, as well as adaptability to the situations presented to them. On a personal level, the Copa America winner has been in a state of constant evolution throughout his career. Every phase of his development as an individual has been born out of a need to improve for the sake of both his own longevity and the prosperity of his teams.

In his early years as a footballer, Messi would remain glued to the flanks as a pacey winger, emasculating all insight with his mesmeric dribbling. In his early 20s, he developed into more of a goalscorer than he was a winger, taking full advantage of the false 9 system and never before seen finishing ability to break endless goalscoring records.

With age, a limited radius, and a clear physical decline, he had to evolve once more to produce the same genius but less frequently whilst greatly ameliorating other facets of his technical understanding of the game.

Furthermore, individual (and even collective) brilliance is worth nothing if it is incessantly marred with inconsistency. Ousmane Dembele would be the prime example of a footballer with a glaring incapacity to create a lasting state of harmony in his play. No two games line up with one another, as a crude mixture of poor decision making and a dreadful lack of tactical understanding coincide with one another in a destructive combination both for player and club.

With Messi, consistency has never been a worry, not when he broke out, not in his prime, and not even in his thirties as his blistering career comes to a close. Bar a handful of seasons in which injury issues hampered his progression, he has regularly been among the best footballers of every year, breaking record after historical record. The epitome of the adage that form is temporary, and class is permanent.

There are, of course, other parameters in which one’s individual quality should be looked at. One’s leadership qualities, devotion to the team through thick and thin, clutch performances when the team’s back is against the wall, all are facets that should be carefully examined when evaluating a player.

Consistently holding up to these standards is what makes and keeps individuals great.

One more trophy changes nothing

Whether or not Argentina would have won the Copa America final would have no real impact on Messi’s individual quality. The Copa America, much like the Euro or the World Cup, is a team title, not one won by individuals. There are much better and far more efficient ways of evaluating the legacies of footballers beyond what their national teams are capable of, with endless examples of footballers who were simply too good for their countries.

When it comes to personal accolades, Messi has won it all and will continue to win more even as he approaches the twilight of his career. His goals, assists, dribbles, passes, innovation, perseverance, leadership, drive, humility, altruism, devotion, and talent are just some of the many factors that led to him earning a spot as high up on the footballing pyramid as he did, one he will hold for eternity.

A mere 90 minutes of football is not enough to dent Messi’s legacy as the greatest ever to have played the game.