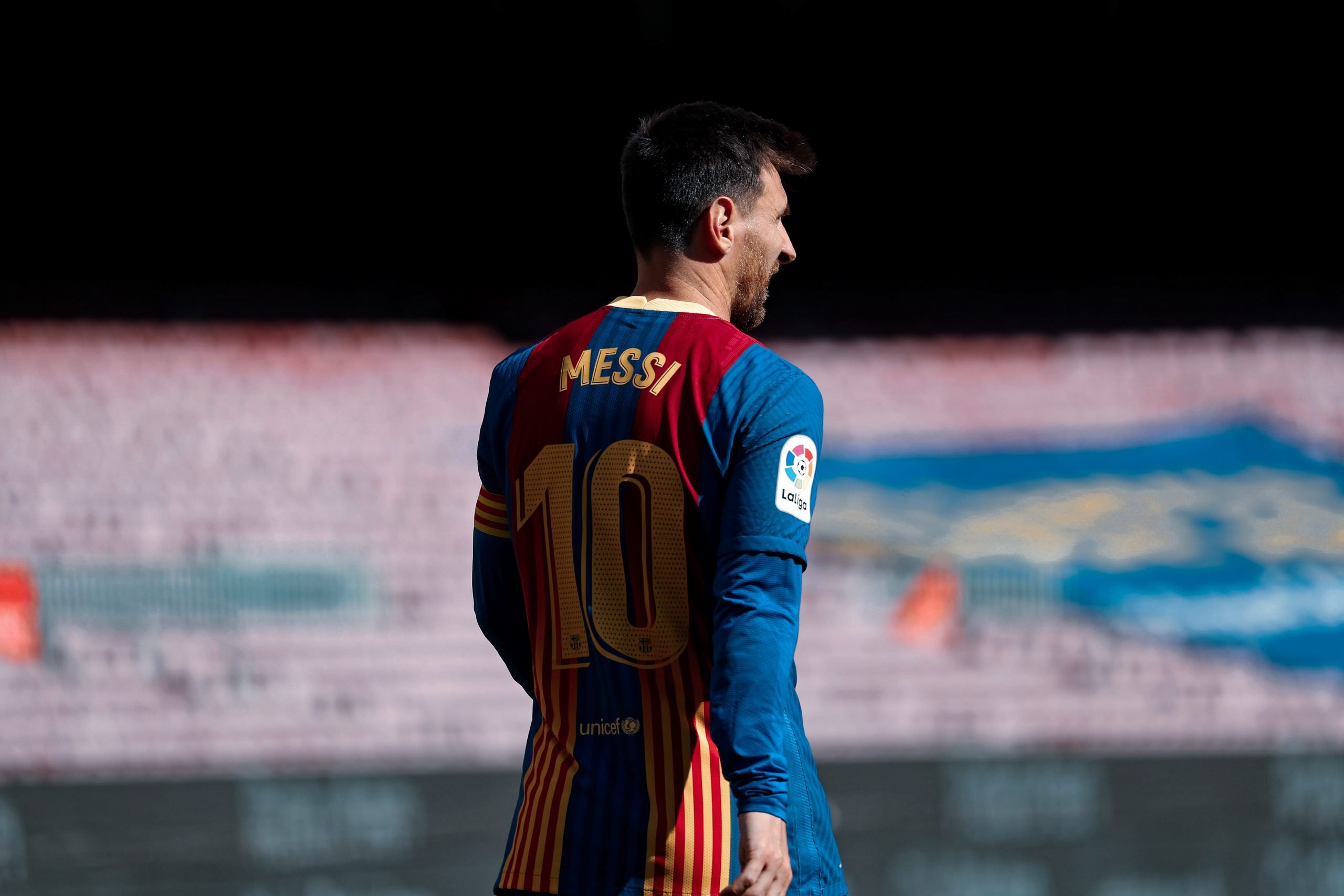 The full-time whistle has just blown in the Champions League quarter-final.

Scenes of a jubilant Bayern squad and dejected Lionel Messi and Co filled the headlines and social media outlets. After four years of consecutive disappointing (to say the least) Champions League results, this night in Lisbon seemed to be the straw that broke the camel’s back.

What followed the embarrassing result was arguably worse. By the end of August, Messi had made his intentions clear: he wanted to find a new club…

This is where the story of Lionel Messi’s 20/21 season begins, and perhaps, it gives us an indication of where it ends. What started with the lowest of lows –both on and off the pitch – ended with another year of adversity and personal triumph. What better encapsulates the G.O.A.T than this?

The following piece is next in line in Barça Universal’s annual “Season in Review”, where we analyse, examine, and tell the story of each player’s (and manager’s) campaign. Expect all bases to be covered, whether pre-season expectations, standout performances, or off-the-field anecdotes.

In the end, we will conclude with a rating (out of ten), having a piece that both quantitatively and qualitatively sums up a player’s season.

Plagued by an institutional crisis, an underwhelming squad, and a looming transfer saga, Messi’s 18th season with Barcelona was truly unlike any we’d seen before. But, on the other hand, it featured themes evident throughout his entire career – the Argentine topped the goalscoring charts yet again and carried the team on his back.

With that in mind, let’s take a closer look at Messi’s 2020/21 season with the Blaugrana…

Picking up where we left off, the 8-2 drubbing against Bayern Munich promised major changes. Then-president Josep Bartomeu declared for a “revolucion”,  ensuring the departures of multiple players who had overstayed their welcomes. But no one expected Messi to be one of them.

Only a week after that night in Lisbon (August 25th), Messi sent the now-infamous burofax to Barça’s head offices. In the document, he expressed his desire to leave the club for free, citing a clause that allowed the six-time Ballon d’Or winner to end his contract at the end of each season unilaterally.

Nevertheless, the “end of the season” was defined as May 31, 2020, meaning Messi was nearly three months too late with his declaration. Consequently, he and his representatives argued that the deadline should be August 31 instead, due to the elongation caused by the mid-season pause owing to the pandemic.

Still, La Liga and Barcelona’s board didn’t budge, claiming that Messi would only be allowed to leave if a team activated his near-700 million Euro release clause. Faced with two options, either taking the club to court or staying put, Messi opted for the latter.

The short transfer saga seemed over. However, Messi’s contract still expired at the end of the season, and his discontent was clear. In early September, he released an interview with Goal, expressing his dissatisfaction and mistrust in the board but the intention to see out his contract. To make matters worse, Luis Suarez was soon unceremoniously sold to rivals Atlético Madrid. In a detailed Instagram post, Messi wrote, “at this point, nothing surprises me anymore.”

With all the off-the-pitch drama, it was only natural for it to impact on-the-pitch results. As out-of-this-world as Messi has been throughout his career, he showed signs of being human in the beginning of the season.

For a multitude of reasons, such as age and attrition, coming off a shortened off-season, and the transfer saga, Messi got off to one of the slowest starts of his illustrious career.

Despite scoring five goals and notching four assists in the opening nine matches, he had gone over 1000 minutes without scoring from open-play (non-penalties). Yet, there were plenty of shots and opportunities – 41 (according to fbref), to be exact. The 1-1 draw against Alaves on Halloween stood out in particular, wherein Messi totalled ten shots and four on target, but to no avail. In all, he looked like a shell of his former self, failing to excel in Ronald Koeman’s 4-2-3-1 formation and with an abundance of “number tens” on the pitch. In many ways, people were declaring the end of Messi’s reign on top of the world.

That goal drought coincided with the team’s poor results, as Barça won only two of their opening six La Liga matches, including going winless for four league games. Additionally, off-the-field issues continued to persist, as president Bartomeu resigned after a motion of no confidence and Messi was subject to media scrutiny, forcing him to state, “The truth is that I’m a little tired of always being the problem for everything at the club,” after returning from the November international break.

Nonetheless, greatness could not be contained forever, and the 33-year old finally scored from open-play on November 7th against Real Betis. Coming off the bench, Messi put up a fantastic performance against Los Verdiblancos. In 41 minutes, he had two key passes, two goals, and a brilliant fake to gift Antoine Griezmann an easy open goal.

That performance looked to open the goal-scoring floodgates, although Messi would score only two goals in the following six club appearances. Again, the team struggled too, losing 0-1 to Atético Madrid, 1-2 to Cadiz, and 0-3 to Juventus at home. But like he’s done throughout the last few seasons, Messi’s individual performances were often the only saving grace. By mid-December, all hope looked lost, and Atléti looked set to be league champions…

When a player and team’s fortunes change, it’s hard to isolate one variable. But, one thing is for certain: with an in-form Lionel Messi, anything is possible.

With the turn of the new year came a new Messi – well, a version we’re all familiar with seeing. From mid-December until the end of the season, he went on a tear. His creativity and sheer dribbling ability were present the entire season thus far, but now the final product returned, and so did the smile on his face.

Across 29 appearances in 2021, Messi totalled 28 goals and nine assists. To this day, he has the most goal contributions of any player in Europe’s top five leagues. Comparatively, he scored 11 goals in the  2020 portion of the campaign.

Additionally, Messi opened up a new aspect of his game, scoring multiple goals outside the box – excluding free-kicks, which have famously been a trademark of his game. In 2021 alone, he has scored five goals from said location (and one in November 2020), including his screamer against Paris Saint-Germain in the Champions League. In La Liga, his five goals outside the box in 2021 totalled a mere 0.23 expected goals, per understat.com. However, even if not given an entryway into the box, Messi continued to punish defences.

Throughout the season, Messi had multiple highlight performances. In fact, he was practically the “Man of the Match” every time he took to the field, defying numbers time and time again. Against Real Sociedad at the end of March, the Catalans, spearheaded by the Argentine, tore apart one of Spain’s elite teams. Messi played a role in three of the team’s six goals, scoring twice, setting up one, and completing seven dribbles.

Against Huesca the week before, he pummeled a shot from outside the box into the top left corner from out of nowhere, assisted Oscar Mingueza, and finessed a shot into the bottom left corner.

Messi’s dominant 2021 was concurrent with Barça’s impressive turn of form. They went on a blistering 19 league match unbeaten run, winning 51 out of 57 possible points from mid-December to early April. Still, the team was eliminated in the Round of 16 of the Champions League, fizzled out in La Liga, and lost in the Supercup Final.

The 5-1 aggregate loss to PSG and underwhelming end of the La Liga season are stains on Barça’s 20/21 campaign, but the Copa del Rey is where they shined brightest. While Griezmann was inarguably the Player of the Tournament, Messi played a vital role in winning his seventh Copa title. Being his 35th trophy with the Blaugrana, the Argentine surpassed Ryan Giggs’ record of most trophies for a player at a single club.

Against Rayo Vallecano in the first round, he opened the scoring for the visiting Blaugrana in their 2-1 victory. Then, versus Granada in the 5-2 thriller, his assist to Griezmann cut the deficit to one goal with minutes to spare, and his hockey assist to Jordi Alba led to the Frenchman’s equalizer.

It was in the final against Athletic Bilbao, however, where Messi put on a show. He scored twice, including one that started with a dribble from inside his own half. Clearly, he has a knack for scoring brilliant goals against Bilbao in cup finals. As the captain lifted the trophy, much of the season’s stress and difficulties were alleviated.

In many ways, this season emulated the same old Messi and same old Barcelona. Time and time again, in the team’s biggest and most important matches, the 33-year old stood out. Whether against PSG in the second-leg or Atlético in the Camp Nou, he was all too often the only player who tried to make something happen. Hopefully, with new reinforcements and more confidence, the team will show more balance next season.

Messi ended the 20/21 season leading the team in goals, key passes per game, shot and goal creating actions per game, and dribbles per game. Yet, statistics have never been enough to define his worth.

It was also a monumental season for him as he took over a slew of records: he passed Xavi Hernandez for most appearances for Barcelona; he became the first player in football history to score at least 20 goals in 13 consecutive seasons in Europe’s top five leagues; he broke Gerd Müller’s record of 30 or more goals in 12 consecutive seasons, surpassed Pele’s record of most goals for a single club, and he won a record eighth Pichichi trophy for most La Liga goals.

In a season full of controversy, drama, and an unclear future, Messi overcame a slow start to lead the squad to a trophy and rewrite the individual record books once again. The news of his demise due to (relatively) poor early-season form was, in fact, greatly exaggerated.

Heavy lies the head that wears the crown, but not for Messi.