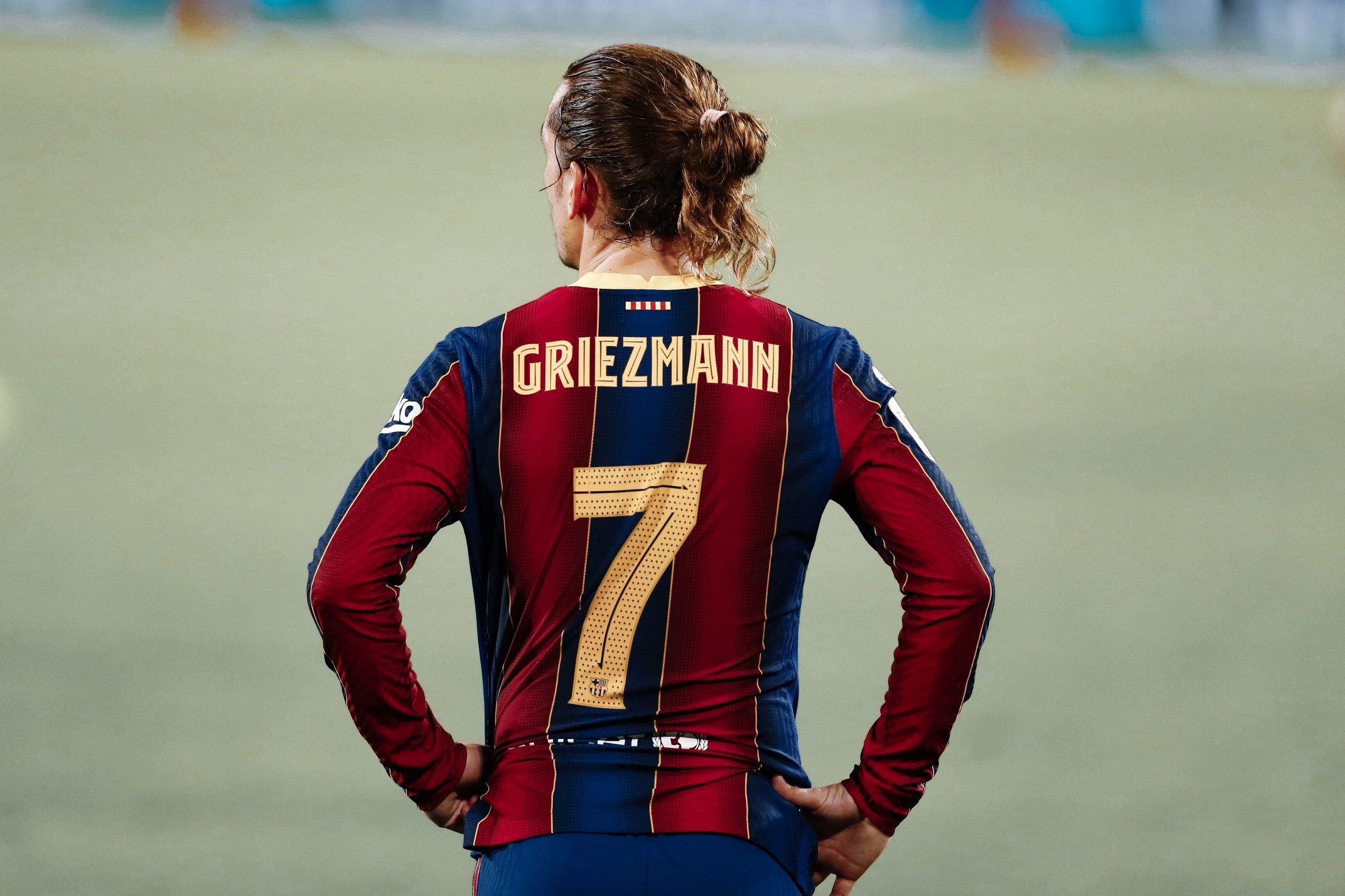 As Jordi Alba got backed into the corner by Koke in the 36th minute of the UEFA Champions League second leg against Atletico Madrid in the 2015/16 season, he had no choice but to attempt a half-hearted clearance. The ball landed right to captain Gabi, who nudged it towards Saul.

The Spaniard raised his eyes, glanced towards the box, and without missing the beat, sliced the still bouncing ball into the box where a certain Antoine Griezmann stood unmarked. Jumping much higher than one would have expected him to, the Frenchman flicked the ball with his head, slotting it right where the devil slept.

50 minutes later, Griezmann got the chance to double Atletico’s lead on the night and take them one clear of Barça on aggregate from the spot after a handball from Andres Iniesta. Ter Stegen, despite his best efforts, had to watch as the shot hit his palm and bulged the net. Despite being favourites, Barça crashed out of the tournament as Griezmann led his team to the finals, eventually losing to Real Madrid.

Four years after that fateful day, Barcelona presented Griezmann to the Camp Nou after a distressing, dramatic transfer saga. 28 now, the Frenchman was still among the best in the world, but had lost a significant amount of his pace and was far from accustomed in anything but the shadow striker role he had picked up at Atleti under Diego Simeone.

With Lionel Messi, Luis Suarez, and Ousmane Dembele already in the mix, forcefully fitting Griezmann into the Barcelona puzzle was going to come with consequences. And sure enough, it did. The World Cup winner was often deployed on the wing, unable to make a difference, falling prey to his own rigidness in terms of positioning.

Capping off the 2019/20 league with nine goals and four assists, Griezmann was touted with a decreased role in the team with the rise of Ansu Fati and Ronald Koeman’s preference for Philippe Coutinho. In fact, the forward’s future at the club is still up in the air.

During the league opener against Villarreal and then the games against Celta Vigo and Sevilla, the Frenchman was forced to slot in at right-wing. Barely aware of what comprised that role, he clearly, and through little fault of his own, fell short of whatever Koeman had expected from him. In those three matches, he registered four shots (one on target) and created no chances.

Departing to international duty with France, Griezmann ended up with two goals in three games, playing in his natural position. However, he did not miss with his shots in pressers, either, calling out Koeman’s decision to play him on RW, saying, “Deschamps knows where he has to position me.”

Griezmann got what he wanted immediately after returning. Well, some part of it. Playing as the central striker against Getafe, he missed the easiest chance of the game, eventually making way for Francisco Trincao in the 80th minute. He was evidently low on confidence but had little to no excuse for a disasterclass like that.

Just over a month into the season, Barcelona played Deportivo Alaves away from home, where Griezmann bagged his first goal of the season. But his fortunes truly turned after an interview in November, where he spoke about his concerns. Then, almost like magic, he ended up on the scoresheet three games in a row, dropping one of his best performances for Barcelona against Osasuna with a goal and assist.

And while he was unable to continue scoring at the same rate, Griezmann managed to gain a large part of his confidence back, as he was seen working up and down the pitch. What was getting concerning, however, was that despite getting into scoring chances regularly, he kept missing big chances. 13 big chances missed in La Liga stands as tall as his goal tally.

From limitless Cup heroics to a shadow of himself

It was in the domestic cup competitions where Griezmann truly came through for Barça. Lining up against Real Sociedad in the Spanish Super Cup semi-final, the 30-year-old created three chances across 120 minutes and assisted Frenkie de Jong’s superb goal. He did miss the penalty during the shoot-out, but thanks to Marc-Andre ter Stegen, it turned out to be inconsequential.

Griezmann more than made up for that with a man of the match showing in the final, scoring both goals for Barcelona against Athletic Bilbao. Often the man to let down the team, the former Sociedad-man, was let down on this occasion as the Catalan giants fell to a 3-2 loss.

His fantastic run continued in the Copa del Rey as well, starting with an impressive showing against UE Cornella. That, coupled with the assist against Rayo Vallecano, made for two decent performances. Still, the best was yet to come as Barcelona were drafted to play against Granada in the quarter-finals.

Griezmann came into this game on the back of a lovely display against Athletic Bilbao, scoring once and creating two big chances for the team. 2-0 down within 50 minutes, it was far from an ideal start, and Barça’s gears did not turning till the 88th minute when Griezmann made a darting run into the box hoping to get on the end of a pass from Messi.

In the hope of some luck, he threw himself at the ball acrobatically, throwing Aaron Escandell off guard. The ball crept in as Barça found some way back. No less than three minutes later, Messi and Griezmann combined again in a very similar manner and position, but the latter was hyper-aware of Jordi Alba’s movement, and nodded the ball down onto a platter for him. 2-2; the comeback was complete as extra-time rolled on.

With a goal and assist already, Le Petit Prince did not stop the show despite the clock striking 100 minutes of game time. A poor clearance from Granada rolled into Alba on the left, who delicately lofted the ball into the box. Wasting no time, Griezmann overtook the dominant Ronald Araujo in the box and jumped over defenders much taller than him and smashed the ball into the net.

This game had all the ingredients of a dramatic game, and that was proved when the Andalusian outfit took back the lead at home through a spot-kick. It was not gonna happen on Barcelona’s watch that day as five minutes later Frenkie de Jong restored the one goal lead.

Arguably the best goal of this eight-goal thriller was still yet to come. Dembele laid off the ball to the man in form Antoine Griezmann inside the box. With confidence oozing in each lock of his pony, the Frenchman spotted Alba between five men and curled the ball with the outside of his boot, right into his feet for a volley. Also enjoying a great night on the day, the left-back rocketed the shot into the roof of the net as the game finished 5-3.

Griezmann went on a sub-par run since that game, racking up no more than two assists in six appearances. Eventually, he was left as an unused substitute against Sevilla in the league as Koeman tweaked his team to play in a 3-5-2.

Given the team’s tremendous performance, Griezmann was left on the bench in the second leg vs Sevilla. However, with the score reading 1-0 at 63 minutes, he was called off the bench and eventually came through with the assist for Gerard Pique’s winner, proving that he would not let the Copa del Rey slip away from Barça. Eventually, he registered his name on the scoresheet in the finals as well, capping off a cup run for the ages.

Up until this point, it had been a topsy-turvy season for Griezmann, and there was no evidence suggesting that it would change. However, a highly underwhelming staging against Alaves hid behind the cracks as Messi gifted him a penalty despite being on a hattrick. It seemed to work, though, as his display against Villarreal was surely worthy of a mention. With two goals on the night, he became the first player not named Lionel Messi in 2021 to win the man of the match trophy for Barcelona.

One game where Griezmann’s contributions surely went under the radar was when Barcelona travelled to Paris for the second leg of the UEFA Champions League Round of 16. Playing as an attacking midfielder, the Frenchman covered every blade of the grass with and without the ball, moving it quickly and continually finding pockets to attack. He won the penalty that was eventually missed by Messi but created an additional two chances in the game.

In a season filled with ups and downs for Griezmann individually and for the Blaugrana as a collective, what never faltered was the 30-year old’s drive to succeed. Albeit his fairytale redemption arc seemed to halt abruptly, and frustratingly so, he never once failed to leave it all out there on the pitch. Moreover, the former-Atleti man is undoubtedly his own biggest critic; something that continually helps him to recover from bad patches. Hopefully, the inconsistency will soon cease to exist.

Inconsistent would surely be the word to describe Griezmann’s season, much like 2019/20. However, this time around, he looked like he had a place in the team more often than not, even when deployed on the wing. And it would be unfair not to mention his contribution off the ball, dropping as deep as the central defenders to collect loose balls and intercept dangerous passes. And it happened a lot more often than one might presume.

More importantly, Griezmann learnt to work without the ball during the offence as well. This was evident by the attacking positions he took up, especially inside the box, often ready to the ball in or lay it off. As the season went on, the crucial misses started to reduce as well.

All in all, Griezmann was very decisive for Barça this season, with nine of his 13 goals in the league helping Barça either open the scoring, equalise, take the lead, or acting as the winner.

He would have to fight for his place against Sergio Aguero, Ousmane Dembele, Ansu Fati, and assumably Memphis Depay. It is not going to be easy, but Griezmann has risen to the task before. Before that, though, the European Championship with France awaits.