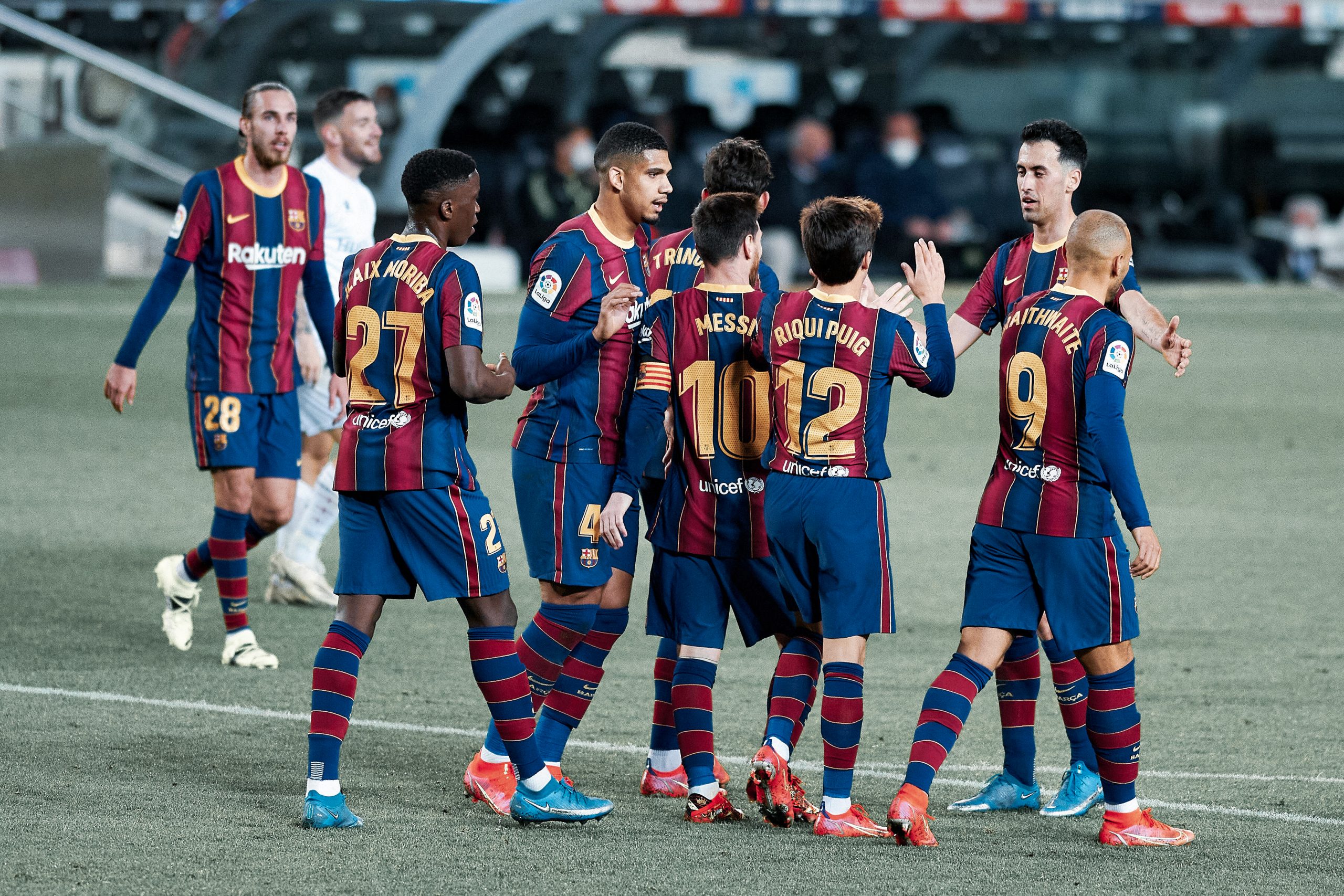 In a far from ideal season, including an early Champions League exit, Barcelona fans are optimistic as ever for their bright future. Here’s why.

On 15th August 2020, Barcelona got battered by Bayern Munich in the quarter-finals of the Champions League. Crisis alerts were issued, team spirits shattered, and the club was at rock bottom. All the players, manager, support staff, board members got crucified after the display, with drastic changes occurring in the summer. The coach sacked, players rescinded contracts or moved on, and the president resigned after a vote of no-confidence.

Eight months later, the Catalans have been knocked out of the competition early, in the Round of 16 stages. And yet, the sensations have only been positives. For the first time in the last four years, the team has gone out of the UEFA Champions League dignifiedly. The first leg performance was not dissimilar from the previous years, and it raised concerns. But since then, they have only been on an upward trajectory.

The excellent game in Paris aside, there are plenty of reasons why Culés have developed a sense of hope for the future. Here are a few:

The Incredible Talent Pool at the club

Last season, Barcelona had one of the oldest squads in Europe. The average age of the starting line up was higher up the table than preferred. Currently, the team boasts an incredible amount of young talents placing the average age among the top three in the league. With the old-guard leaving the club or getting injured, the youngsters have risen to the occasion and grabbed the opportunity with both hands.

With Gerard Piqué and Sergi Roberto injured for the long term, Óscar Mingueza and Ronald Araújo slotted in without fuss. The former has shown great flexibility by playing in both right-back and centre-back roles and excelling in a back-three. And the latter has been rock-solid and dependable every time he has taken the field. With Sergiño Dest at right-back and possibly Eric García coming in, the backline looks impressive, and most importantly, set for years.

With Neto likely to leave in the summer, two La Masia keepers are waiting in line to be Marc-André ter Stegen’s number two. Arnau Tenas and Iñaki Peña are more than ready to take up the first team gloves.

If Barça can boast about anything in Europe, it is the plethora of ridiculous midfield talent they possess. The first team already has Frenkie de Jong and Pedri González as starters, with Ilaix Moriba and Riqui Puig used as regular substituted. Apart from the first-team stars, the B-teams hosts an array of midfielders waiting for their opportunities. Jandro Orellana, Nico González, Álex Collado are all capable shouts for the first team spot.

Ansu Fati, Ousmane Dembélé, Francisco Trincão are some exciting young talents the Catalans possess. Fati’s goalscoring prowess could help immensely, and his return will be a delight for the team. With Konrad de la Fuente also waiting in line, the forward line is one proper striker away from scoring goals for fun.

Barcelona currently has the right mixture of experience and young blood, and there’s little reason why the fans shouldn’t be excited to see them on the pitch.

Among Ernesto Valverde, Quique Setién, and Ronald Koeman, the managers who have been at Barcelona in the last four years, only Koeman has shown the sights of learning from his mistakes. Valverde continued with his pragmatic approach in big games, Setién continued the same despite posing promises earlier, but only Koeman has adapted to circumstances.

The Dutchman started with a highly vertical 4-2-3-1 formation, unfamiliar to the team, with only certain players capable of covering the ground required. The team struggled on both attack and defence, unable to find numerical superiorities and kept chasing shadows. Soon, the gaffer shifted to the much more natural 4-3-3, with Sergio Busquets playing where he belonged. Slowly the team found its shape, and the manager found his strongest eleven with players having specific roles.

In recent games, he has alternated between 3-5-2, 3-4-3, and the 4-3-3 formations according to the match situation. The Catalans have won nine consecutive away games in La Liga under Koeman, which has not happened in a long time. Barça play with more control and are slowly becoming mentally strong with the Dutchman.

The upturn in results has brought the side closer together. The dressing room is much more united, and it is showing on the pitch. The Copa del Rey comebacks would not have happened without the faith and solidarity the side has shown under Koeman.

Tactics aside, the 57-year-old has shown great belief in the players he prefers and has played a big part in improving and integrating them. Pedri has become an immovable part of the starting eleven, and Frenkie de Jong has discovered multiple facets to his overall game. And most impressive achievement, Ousmane Dembele has been injury-free for the first time since he arrived in Catalunya. Koeman and the medical staff have worked out his workload and slowly gotten him back to his full fitness.

The upswing in results, the dressing room harmony, and the improved outlook of the club, has resulted in Koeman gaining a lot of respect among the supporters. Winning at least one of the two possible trophies does not seem far fetched now.

A new President and a new Project

In a matter of six seasons, Barcelona have come down from being the best team in the world to getting a yearly humiliation in the Champions League. The downfall did not start right away after the last UCL win but dates back to the time Sandro Rosell took charge of the club after Joan Laporta’s term. What followed was a decade of scandals, shady deals, transfer bans, prison time for the president, and other things to shame the club.

Now, Joan Laporta’s back after a dominating victory in the polls. The president of the team, which was arguably one of the most celebrated sides in history, is back. He brings the charisma, the contacts, and the experience that is needed to revive and put the club back among the best in the world.

Laporta’s right-hand man, and vice-president of the newly elected board, Rafael Yuste, is a known believer in La Masia. According to his statement, he envisions a team of 11 academy players, which brings a lot of hope for the kids who dream of playing at the Camp Nou for the first team. After a decade of using the academy to only balance the books, this is a welcome change.

Joan Laporta, Rafael Yuste, Mateu Alemany, Jordi Cruyff, possibly Victor Valdes and Carles Puyol are all people associated with the successful times of the club. The club being back in the hands of these capable people only bring joy to the Culés. The president has mentioned, “Barça has no transitional seasons”, citing the club will be back to winning ways very soon.

Barcelona are still competing on two fronts this season. A trophy or two is certainly possible and is a welcome addition after a poor start to the season. Irrespective of how the current one ends, there is so much to look forward to in the coming years. A bright future awaits Barcelona!