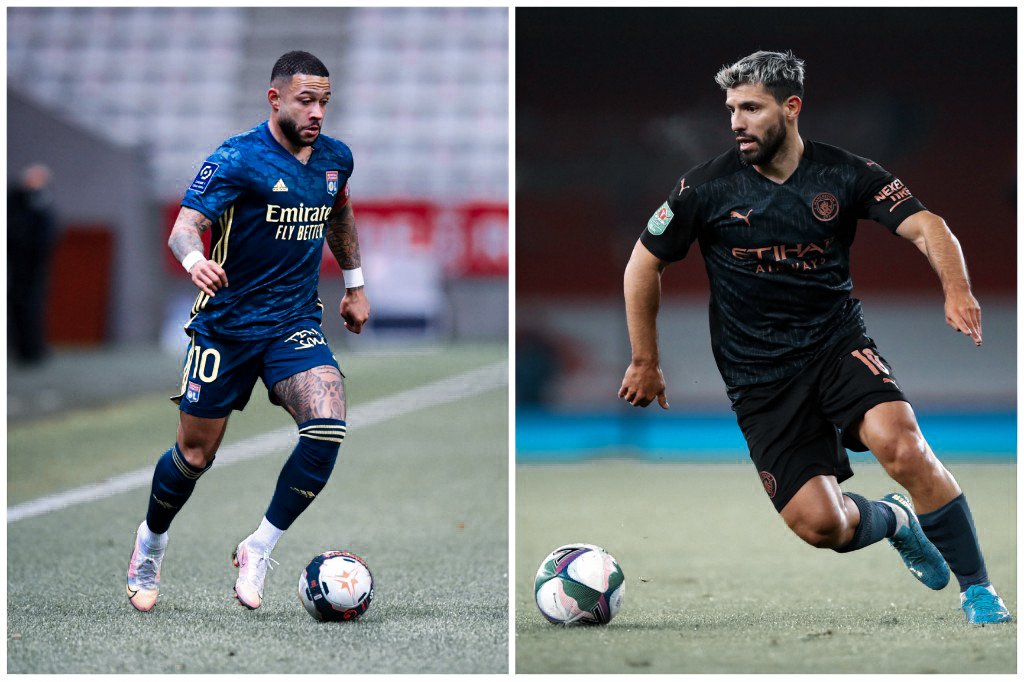 With the summer transfer window slowly but surely approaching, Joan Laporta and Barcelona’s management have ramped up their search for players to reinvigorate the squad. Although youngsters like Pedri and Ronald Araújo have cemented places in the first-team, there are still gaping holes in the squad. Barça need long-term replacements for Sergio Busquets at centre defensive mid, Jordi Alba at left-back, another centre back, and perhaps most important of all, new a centre forward.

The game against Paris-Saint Germain served as a further reminder for this. The team created countless chances and one-on-ones, but they were not clinical enough in front of goal. Although statistics never tell the entire story, according to fbref.com, Barça had a higher xG (expected goals) total than PSG over the two legs. Besides this tie, this has been a recurring theme throughout the season.

Consequently, three names have been linked with the club: Erling Haaland, Sergio Agüero, and Memphis Depay. Haaland is naturally their main target, but a plethora of large clubs across Europe are fighting for his signature as well. Furthermore, he would cost anywhere from €70 million to over €100 million, so his signing is extremely uncertain, and would require Barça to off-load players first.

On the contrary, Agüero and Depay are both free agents this summer and are realistic in terms of finances. Signing one of them seems entirely plausible. Therefore, should Barça sign Agüero or Depay? If reports are to be believed, Ronald Koeman would much rather have the Dutchman. Would he be right, though? Barça Universal takes a look.

Sergio ‘Kun’ Agüero started his career with Argentinian club Independiente, before moving to Atlético Madrid in 2006. He was a revelation with the Rojiblancos, scoring 100 goals in five seasons, and was such an integral part of their team despite his young age. In the summer of 2010, he moved to Manchester City, and the rest — as they say — is history.

In his first season, his famous last-minute goal against QPR single-handedly won City the Premier League, and he has won thirteen trophies with them. He is the club’s all-time leading goalscorer with 256 goals, he is the fourth-highest goalscorer in Premier League history, and he is the league’s highest goal-scoring non-English player.

Unfortunately, injuries have limited his production over the last few seasons. He has only made twelve appearances this campaign and scored twice. The Argentine will be 33 years old by the time next season starts, but he potentially has a season-or-two left in the tank.

Memphis Depay’s career has had its twists and turns, but he’s firmly established himself as one of Ligue One’s brightest stars. Depay rose through the ranks of PSV Eindhoven before becoming a staple in their first-team. He tallied 50 goals and 29 assists across 124 appearances and wreaked havoc across the Dutch league.

He was a breakout star in the 2014 World Cup with the Netherlands national team, and that coupled with another successful season in 2014/15 earned him a highly-touted move to Manchester United. Unfortunately, he failed to make a genuine impact with the Red Devils as he was inconsistent throughout his stint.

As a result, he moved to Olympique Lyonnais in 2017. An ACL injury in late 2019 has been his only major setback with the French club, and he has tallied an impressive 69 goals and 52 assists in 168 appearances. In 30 appearances this campaign, the Dutchman has 15 goals and 9 assists. He has also greatly matured as a player and is now Lyon’s captain.

With the Dutch national team, he has become a key member for them in the attack. Ronald Koeman consistently deployed him as a centre forward, but he also plays as a left forward or winger.

While Agüero and Depay are both being targeted as centre forwards, they play different roles and fulfil varied jobs on the pitch.

By every metric, Kun Agüero is a complete and modern centre forward. He excels in every facet of the game upfront. After all, he is one of the greatest strikers ever to play the game. Age and attrition have admittedly taken away some of his attributes like pace and dynamism, but he still offers a lot. His link-up play remains excellent, he can navigate in and out of tight spaces, and he is always composed and clinical facing the goalkeeper.

He plays as a centre forward, typically as a lone striker in a 4-3-3 system over the past few seasons under Pep Guardiola. He does most of his damage in and around the goal, especially as he is older now.

As aforementioned, he has spent most of this season on the sideline due to injuries, but in 2019/20, he scored 23 goals in 32 appearances. Barça would not be getting the Agüero of a few years ago, but he could still be extremely serviceable.

Memphis Depay, on the other hand, is extremely versatile and can play in an array of attacking positions. He has experience as a left-winger, a number ten (playing behind the striker), and as a centre forward with the Dutch national team. This season with Lyon, he has played the majority of his minutes at centre forward.

He has a knack for drifting inside and either taking a shot from distance, setting up teammates, or making his way into the box. In all, he typically has the license to stay free on the pitch, roving from one end to another, contributing in several aspects of the game.

Depay is a creative hub for Lyon as he leads the squad with goals (15), assists (9), shot-creating actions per 90 minutes (5.24), and successful dribbles per game (2.56). On a pessimistic note, seven of his 15 goals have come from the penalty spot.

In comparison, both are extremely technical players, but Depay is a more dynamic dribbler due to his speed, footwork, and positioning out wide. Furthermore, the Dutchman is better suited to a creative role in terms of setting teammates up and creating opportunities for them. Given his age, Depay can also cover more ground, whether dropping deep to help build up or making runs behind the defence.

Agüero has him beat, however, with his finishing, composure and positioning inside the six-yard box. As Luis Suárez is proving with Atletico Madrid this season, age may limit one’s speed, but a world-class forward never loses the ability to be in the right goal-scoring positions at the right time and to slot the ball past the opposing goalkeeper.

Each player offers a different role and timeline for Barça. Agüero, given his age, is surely a stop-gap and temporary fix. He will be asked to play the number 9 position for a season or two before the club finds a long term option. Nonetheless, if Ansu Fati or someone else in the squad can develop into a centre forward, or at least occupy those spaces, Agüero won’t be asked to play too many minutes. That role as more of a complementary piece rather than an undisputed starter could suit him perfectly at this stage in his career.

Questions arise, however, when considering what formations the Blaugrana would play. If they stick with the 3-5-2 formation or 3-4-3, where would Agüero start alongside Messi, Fati, or Dembele? In a 4-3-3, he could not start at centre forward because Messi has to play as a false 9, and he would not play out-wide. Despite this, Agüero fits a need for Barcelona in terms of proficiency as a fox in the box, and he would not contribute to the team’s issues with overcrowded midfield areas.

Depay, on the other hand, is more of a long-term solution. He is 26 years old and entering the prime of his career. Koeman deployed him as a centre forward when he coached the national team, and he would likely do that again. Alternatively, he can play on the left-hand side as a left-winger/forward or in a more central position.

He is generally clinical upfront but is not yet the calibre of centre forward that can lead Barça’s front line. Koeman coached Frenkie De Jong with the Dutch national team, and part of the hope when he was brought in was that he would bring out the best in the midfielder, and he’s done just that. Perhaps there’s hope that he could help Depay excel at Barça too.

In terms of playing time, if Depay establishes himself as a number 9, the position could be his for the next few seasons. Nevertheless, there is plenty of competition upfront for a player of his profile, and he likely spends too much time in central positions for Barça’s liking. While they prefer players who are technical and creative, they desperately need someone who spends the majority of the game making runs behind the defence and playing in the box.

Naturally, finances come into play, and that side of things must be considered. Reports have indicated that Agüero is willing to take a pay cut to join the Catalans, albeit he would need a sign-on bonus. Granted, given Barça’s tight finances, they are unlikely to pursue him if he is too costly. On a positive note, his contract would likely only last a few seasons.

Depay is only 26, and he could be a longer-term option for the Catalans. Furthermore, if his stint is unsuccessful, he would potentially have more suitors than Agüero. Koeman is reportedly keen on signing the player and wanted him last fall, but finances kept that move from happening. Also, Depay is a free agent, and a player of his quality is rarely out-of-contract. Signing him could turn out to be a savvy piece of business.

How Should Barça Proceed?

In the end, both Agüero and Depay could offer plenty to Barcelona. Although they are both being targeted as centre forwards, they are comfortable with different roles on the pitch and, as such, would change how the team plays.

Agüero is an attractive option due to his experience, positioning, and calibre of finishing, but his age and injury history stir doubts. Depay, on the other hand, is younger and could excel under Koeman, but his profile as a hybrid number ten/forward is not exactly what the Catalans need. Cúles would most likely prefer the club to sign Erling Haaland, but that’s not entirely realistic at this point.

Of the two, Agüero should be the preferred signing solely because of his profile as a finisher, which the team desperately needs. He would be a solid temporary fix that would allow the club to have an extra season or two to find a long-term replacement.

After repeated poor transfers from the previous administration, Laporta and his team must make the right move at this critical junction. Whoever they say, expectations will be high.