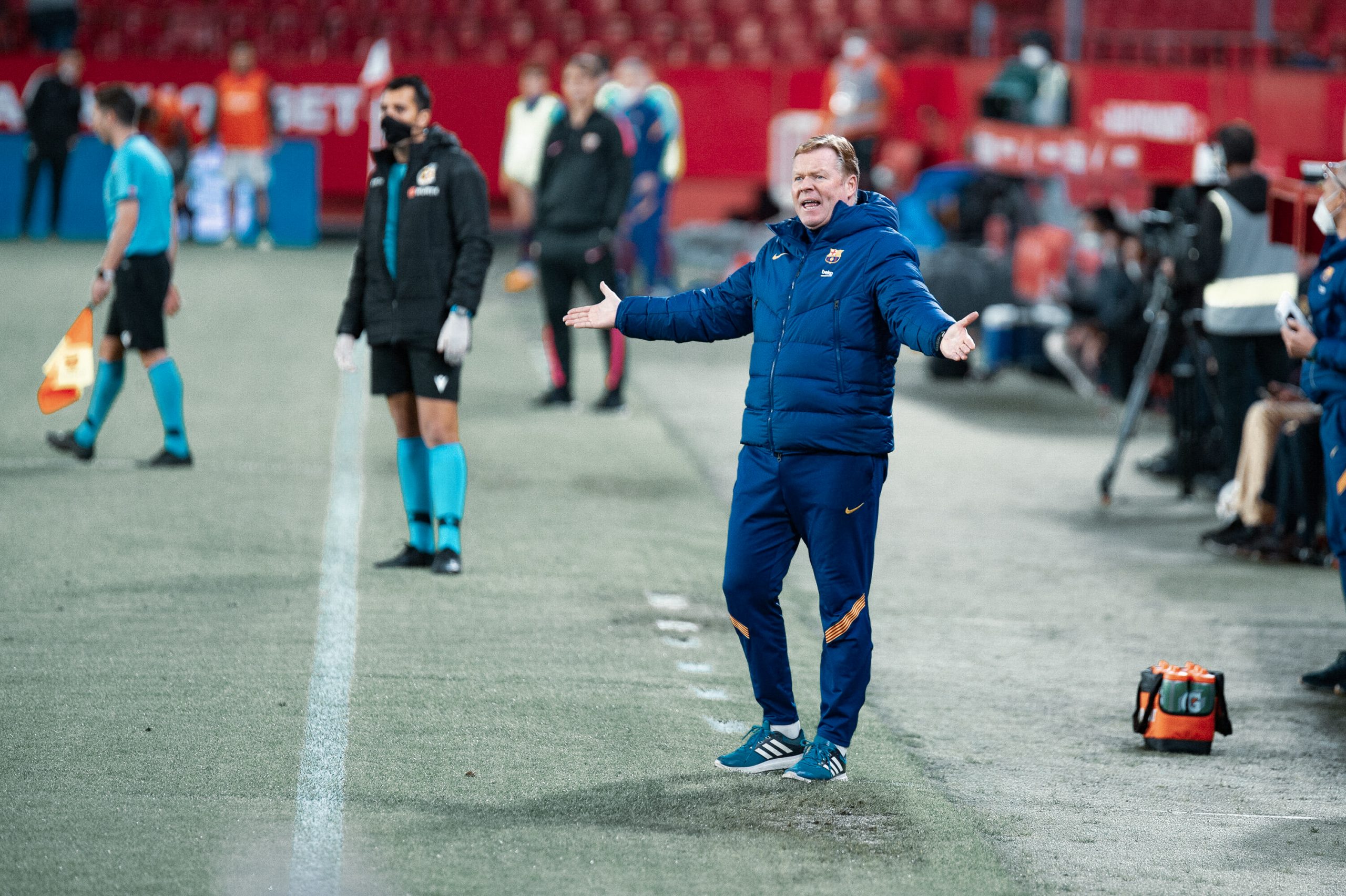 There is a stark difference between having a starting eleven and a setup on paper to how it actually performs on the field in reality. Barcelona’s famed 4-3-3, Ronald Koeman’s 4-2-3-1 or even Johan Cruyff’s iconic 3-4-3 are reasonably good setups on paper, however, the tactics and intentions behind them are what take you the extra mile.

In the games against Sevilla last week, both in the Ramon Sánchez Pizjuan, as well as the Camp Nou, the Dutch manager opted for a hybrid between a 3-5-2 and a 3-3-4. This shift in tactics caught his opposing manager Julen Lopetegui completely off guard the first time, producing arguably Barça’s best performance of the season. Even with his plans known to the public, Koeman repeated the same formula, and through a spirited comeback, he earned his side a spot in the Copa del Rey final.

He tweaked the formation a bit to pave the way for Antoine Griezmann into the side against PSG, making it a 3-4-1-2 with the Frenchman switching positions with Lionel Messi. On a larger scale, the formation still represented a 3-5-2.

In this article, Barça Universal explores the functioning of Koeman’s 3-5-2, some iconic individual performances from certain Blaugranas and finally, how Sevilla and almost PSG shot themselves in the foot.

Possibly the most notable benefit to using the 3-5-2 was in the sheer number of positional and situational advantages that Barcelona had over their opponents, as risky as they were to come by.

The shift in formation, as well as set up, did two major things for Barça: it played an integral part in bolstering the core players’ strengths as well as mitigating their individual weaknesses.

Barça’s players were consistently situated in such a way that regardless of how Sevilla would try to weave their way through them, their efforts would be rendered futile. Often when attempting to play out the back, Sevilla would use a sort of 2-3-2-3 setup, creating a multitude of passing triangles with which to open the Blaugrana up systematically.

Through the positioning of Lionel Messi and Ousmane Dembélé, all three of Victor Bono, Thomas Vaclik, and Keylor Navas immediately had both their centre backs cut completely out of the game. The only outlet, therefore, came in the fullbacks — Jesus Navas, Marcos Acuna; Alessandro Florenzi, Layvin Kurzawa.

Louis Van Gaal was strongly against playing out the back through his fullbacks and with reason. Doing so reduced the number of potential recipients of the ball by half, and when pressure would be applied on them, they would be so close to the touchline that they would either instantaneously lose possession through dispossession or a throw-in.

This was precisely what happened with Sevilla and, in large parts, PSG.

Whenever Bono, for example, played the ball out wide to his left-back, be it Escudero or Acuña, Sergiño Dest was quick to press and forced them into plenty of errors. The same was the case for Jordi Alba in the opposite flank. In both victories, such was Sevilla’s impotence at creating build-ups through the left that their fullbacks — who normally are rather offensive — created a combined total of two key passes between them, with their heatmaps heavily concentrated in their back half of the pitch.

PSG were caught out several times as well, especially on their left side. Dest made no mistakes by targeting Layvin Kurzawa, who created problems for his side throughout his time on the pitch. Alessandro Florenzi not so much, but still flustered.

When playing out through their fullbacks failed, Bono resorted to playing long balls to Luuk De Jong. Given the fact he is a tall and physically imposing figure in attack, this option made absolute sense, but there was only one problem for Julen Lopetegui’s men; Gerard Piqué.

Through his astute positioning and aerial prowess, he neutered all what those vertical balls ideally should have offered. The Spaniard took care of Youssef En-Nesyri in the same manner. Once winning the ball back, the immediate option was to play a pass to one of Sergio Busquets or Óscar Mingueza. Both are exceptional passers, and regardless of whatever Sevilla wild try, that pair would lacerate passes through them like a hot knife through butter.

In central midfield, it is perhaps Busquets who benefited most from this shift in tactics. Thanks to the security given to him by the three centre backs, he no longer needed to spend such long portions of the match in the back as he used to before. Instead, he had much more room in the middle and final third with which to create and did so diligently.

With either one of Pedri Gonzales or Frenkie de Jong on his side, he would lead the counter-press immediately after the side lost possession. This was anything but costly as the 3-5-3 gave the Catalans constant 3v3 opportunities with their opposing midfielders. They carefully marked each zone of the pitch in order to anticipate passes and the players’ movements before they even happened. The result was an inert midfield, limited to passing only amongst themselves, and this too at levels much below what they ideally would be.

This midweek, Griezmann mirrored de Jong’s absence in the midfield in the best ways he could. A tireless presence, the World Cup winner, is always quick to press the holder of the ball and dropped deep to make crunch tackles.

There are moments in which Sevilla’s pressing had somewhat of a negative impact on Barça’s overall shape, and this is where Lionel Messi came in. By dropping deep as he so often does, he was consistently able to create a positional superiority in the midfield by being that extra man. In doing this, and especially through the right halfspace, he would complement the movement of Frenkie de Jong, Sergio Busquets and Dest.

Through this positional fluidity, Barça were infinitely capable of creating overloads wherever the ball was and therefore nullified everything Sevilla had to offer. This was in every conceivable way a tactical masterclass on Ronald Koeman’s part and one whose importance might just change the course of the season for the Catalan giants.

Ronald Koeman’s 3-5-2 is undoubtedly his greatest tactical innovation yet. Through it, Barça were able to give a vintage performance against a relatively big team not once but twice in succession. Some external factors played into its success, such as Julen Lopetegui’s inability to craft a system capable of mitigating what his counterpart in the dugout had set in motion. Still, there is nothing to be taken away from the Dutchman here, who successfully managed to devise a system that gets the best out of every single one of his players.

As was seen against Osasuna this past weekend, this is a system whose functioning can be at its optimal best if and only if the pressing is coordinated and if the players are in prime physical shape. Without these two variables conflating with one another, the system falls apart. Given its success this past week, the question remains, is this a setup to be used in the long haul, or will Ronald Koeman revert to the 4-3-3? Only time will tell.