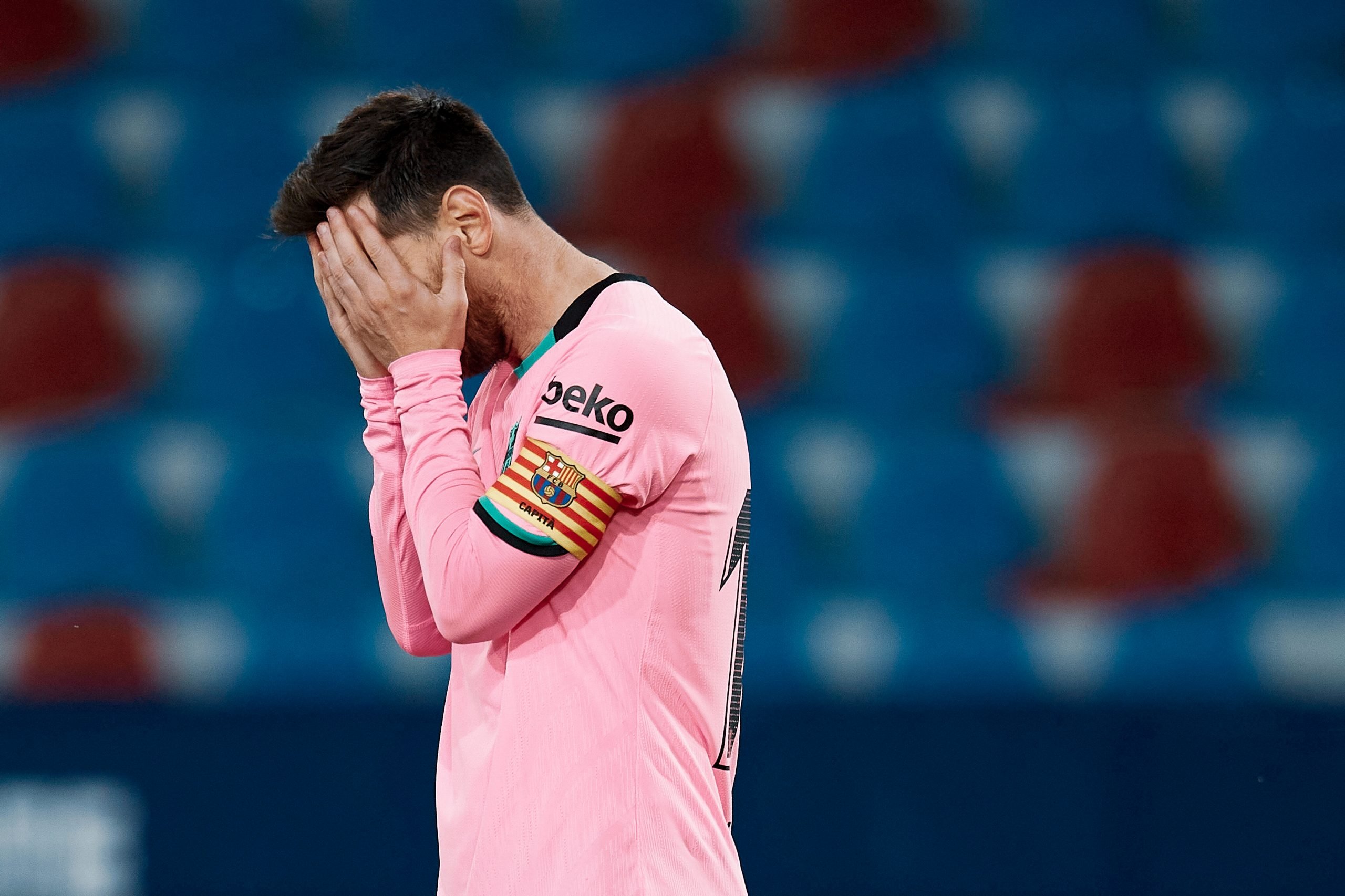 One too many time this season, Barcelona have floundered their opportunities to go top of the table. Whether in failing to win all their fixtures to the two Madrid clubs or losing crucial games such as the one against Granada, Barça have been subpar beyond measure in the most important moments of the season.

Once again, their defensive and positional frailties have been exposed, having been held to a 3-3 draw against Levante at the ever-difficult Estadi Ciutat de València. Ronald Koeman’s time at Barça has been under scrutiny for quite some time now. Now, with costly performances in recent weeks mainly being down to poor in-game management and tactical decisions, it appears that his position is shifting more outside than inside the club.

Barca Universal takes a look at each of the players’ performances last night in an effort to dissect what went wrong.

The German shot-stopper stopped anything but shots last night, having conceded three goals from six shots on target. In covering his near post, ter Stegen left a large gap in the goal, which was easily exploited by Gonzalo Melero through a header, but this goal was mostly down to abhorrent defending.

The next goal came from a wonderful strike by José Luis Morales, leaving the 28-year-old keeper with little to no chance of stopping a wonderful strike. Finally, more poor defending let the German concede a third on the night, and that too on his near post. It was a night to forget for the Barcelona number one.

Until the Uruguayan was on the field, the right side of Barça’s defence looked relatively solid on the night, with his physical and aerial prowess, as well as timing and precision in winning the ball, keeping Barça safely in control of their defence.

But as soon as he was substituted off for Roberto, Levante ran riot on the right side, totally and utterly churning the Blaugranas in and out on several occasions. While not starting as often as he was before injuries, Araujo’s importance can not be understated, and fans will be hoping he is fit and fine after an injury scare last night.

Such poor defending from someone at the level of Piqué is truly an indication of his physical decline with age. At 34-years-old, the veteran is no longer able to exert himself in defence, or get in the way of attackers much like he used to in the past. He seems lethargic and unable to defend adequately, often missing crosses, pacy attackers, and most disappointingly, unable to mark players in the box.

For the first goal, he was unable to track the ball’s trajectory or get a leap high enough to stop it from reaching Melero. In the second goal, the Spanish veteran defender failed to mark Morales’ run while also unable to display the speed required in getting in front of him quickly enough and block the shot. For the third goal, Piqué was totally unable to track León’s run on his blind side, who thoroughly left the World Cup winner for dead before scoring into ter Stegen’s near post.

If anything, this performance was testament to the fact that the old guard in defence must make way for the youth, with Araujo, Mingueza, and another world-class central defender needed desperately for the Blaugranas.

There was not much wrong with the Frenchman’s performance on the night, with all three goals embarrassingly coming down the right flank after Araujo’s substitution at half time. On the night, Lenglet was fairly active in defence, with three clearances and blocked shots, two interceptions, and one tackle.

Having been benched for six games straight, the French speedster made a great return to form, scoring and assisting one. His assist to Pedri was sublime; after receiving a through ball from Messi, he took the ball into a dangerous position in the box before swiftly cutting it back with perfect timing, leaving the 18-year-old an empty net to score into.

His goal also gave Barça the lead for the second time on the night, with a thunderous strike into the top left corner. However, the Garnet and the Blue floundered, meaning Dembélé’s wonderful performance went totally under the radar.

Win, lose, or tie, Frenkie de Jong will perform every time. With an astounding four key passes, two successful dribbles, and two big chances created on the night, the Dutch midfielder was absolutely pertinacious in his mission to do his best for the team.

His best moment in the match came in the 5th minute, when he received a pass at the far end of the opposition box before smartly cutting it back and laying it off for Pedri, who unfortunately missed his easy chance on the night.

Busquets struggled to play at his level, unable to dictate the game’s pace or pass with his usual accuracy. He was pressured in the middle of the park throughout the night, misplacing passes and failing to win the ball back.

He lost possession on twelve different occasions and only registered an 85% passing accuracy, which is highly unlike him. Perhaps his facial contusion left him feeling slightly nervous on the night, unable to play with the calmness and control that he so often displays, and must, both for his own sake and for the team to function.

Pedri made a decent return to form, often getting into dangerous positions to provide goals for Barça. While he did miss two big chances on the night, he tucked away an easy finish on his weak foot, giving the Blaugranas their second goal. Additionally, he seemed sharper than he had been in recent weeks, losing possession a lot less than in his previously poor performances.

His most noteworthy moment in the game came on the left when he attempted an Iniesta-like croqueta on the touchline before swiftly cutting it back in a wonderful and cheeky nutmeg.

The Spanish fullback had a fairly decent performance on the night. His assist to Messi was wonderful, and it seems that he really does have a telepathic connection with the Argentinian. Alba can pick him out like a needle in a haystack, with his wonderful mid-driven cross ending up in a mouth-watering Messi special.

Surprisingly, he was also pretty solid defensively, but it was all in vain thanks to the total and utter failure of systems on the opposite side.

As always, Messi was the main (and only) creative force for Barça, registering three key passes, two big chances created, and 3 successful dribbles. The six-time Ballon d’Or winner also scored one of his best goals all season — a scissor kick — and also got the pre-assist for Pedri’s goal. Yet, even considering all his contributions, it wasn’t the best night for the 33-year-old. At this point, he is simply a victim of his own standards.

A total disappearing act from the Frenchman on the night, who contributed in no tangible way whatsoever. While he was not awful, his lack of presence blunted the Blaugranas up front.

It was an especially poor array of substitutions made by Koeman that were the main reasons for Barça’s utterly inadequate defensive performances in the second half.

If it wasn’t clear he had to go earlier, it is sure as day clear he has to go now. The Spanish midfielder is clearly out of his depth at full-back, even after playing there for several years. He is never able to close down opposition wingers and totally unable to display any physical prowess in defence; he was quite literally used as a stepping stone by Melero in his first goal, who probably had equal chances in scoring the header whether marked by Sergi Roberto or totally free of any marker.

The second goal was also largely the 28-year-old’s fault, as he failed to mark Morales’ run between him and Piqué, almost looking unwilling to get involved in defensive actions. Unreservedly horrid from the Catalonian.

There was not much special about the 21-year-old’s performance on the night.

The Danish striker only got four touches in nine minutes.

Much like his fellow right-back, Dest failed to close down Toño on the left-flank, who turned him inside out before sending a cross in for León’s goal.

Even in just 10 minutes, the 21-year-old has a fresh and positive impact on the game, always looking to find direct and progressive passes to create danger. The questions about his exclusion continue to mount.