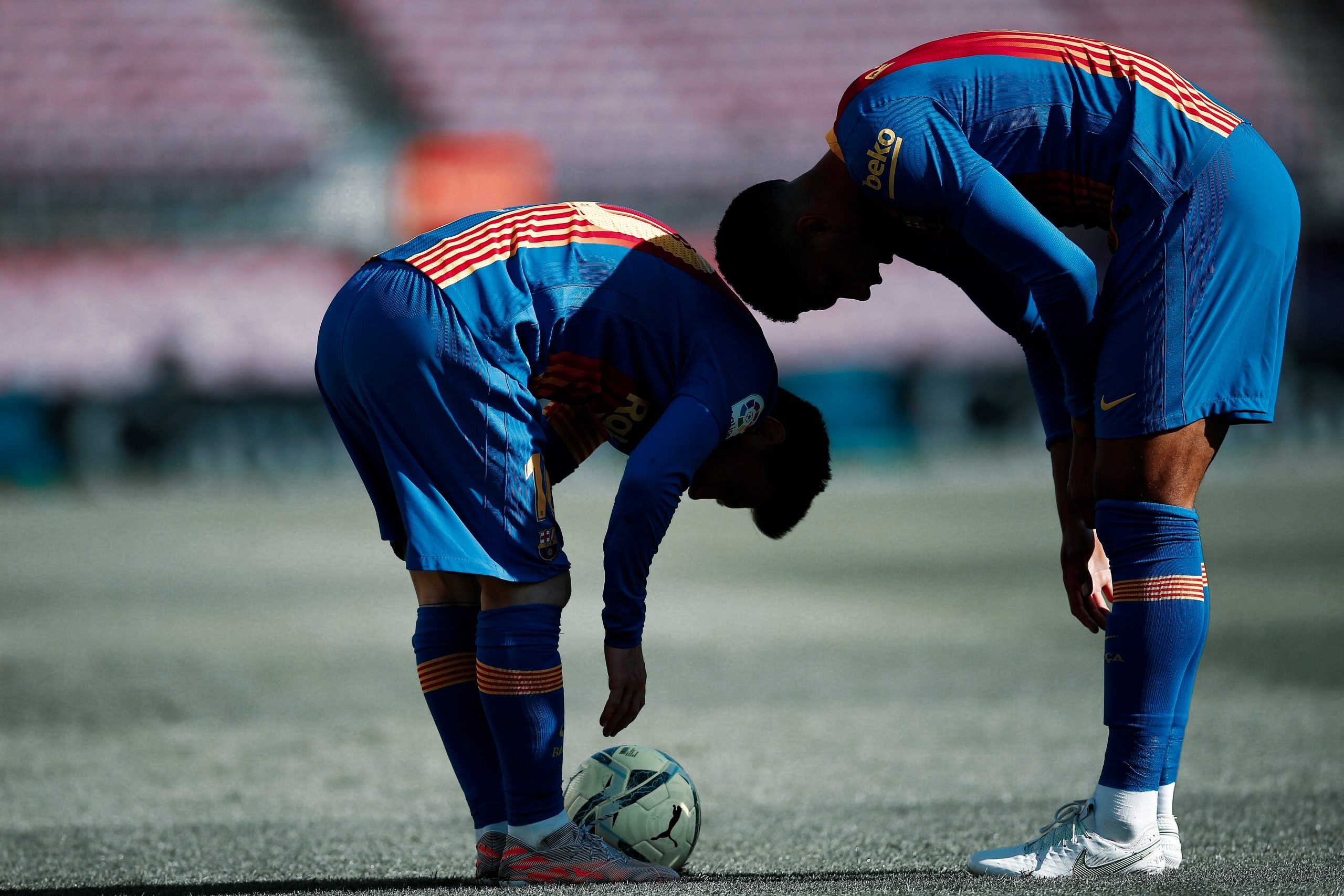 La Liga seems to be celebrating a perennial Christmas this time around as the year of generosity goes on. After being handed the league on a platter by both Barcelona and Atletico Madrid, Real Madrid once again returned the favour to Diego Simeone’s men. A lucky draw against Sevilla was possible only courtesy of a last-minute equaliser by the under-scrutiny Eden Hazard.

The Spanish League is just three games away from its conclusion, yet not one dares to firmly place money on any side. None of the three horses in the race seem convincing or dependable. Each carries with it a unique set of flaws, ready to be exposed. Barcelona at the moment are mathematically the furthest from the title in the top three, but just one more slip up by the two Madrid sides could see the Catalans leapfrog them as favourites. For that, however, Barcelona must get all three points on Tuesday night to put pressure on their competitors. Here is how Barcelona could lineup against Levante.

Marc-Andre ter Stegen came up clutch in the first half against Atletico Madrid. As the visitors created chance after chance on the right flank, the German came up with crucial blocks to save the point for his side. Yet, his great performances seldom praised, especially with respect to the amount of criticism he receives. He will look to start again on Tuesday to put an end to the doubts around his quality.

Oscar Mingueza had a dreadful outing against Los Rojiblancos, leaving the pitch after the first half. Ronald Araujo, who replaced him, put up a splendid performance in defence. His pace neutralised the lethal threat of Yanick Carrasco and helped the Catalans regain composure in the second half. Moreover, he proved to be a constant threat in set pieces, coming close to scoring twice. He will start in defence.

Gerard Pique and Clement Lenglet will continue to hold their places in the back three. With Mingueza out, their ball-playing abilities will be put to the test more and might force them into more risky ventures. The resurgence of Lenglet and the recovery of Pique has certainly brought with it a sense of composure. However, there are many gaps yet to be filled in defence, and the duo will have to pull their socks up.

Sergino Dest started as the right wing-back on Saturday and was rather positively involved in the buildup. However, his advanced position brought several problems on the hosts’ right flank, giving rise to numerous openings for Atletico Madrid. Nevertheless, Dest must get the start against Levante ahead of Sergi Roberto.

Jordi Alba was very actively involved throughout the 90 minutes on Saturday. Though the left-back was very effectively neutralised by Kieran Trippier. The Spaniard will look to get back to his best in attack on Tuesday night.

The concussion to Sergio Busquets and his subsequent exit changed the course of the match at the weekend. The veteran midfielder has been one of Barcelona’s most important players by far. This was reiterated once again in the draw to Diego Simeone’s side. He has trained with the group again and is available for selection. Busquets will start on Tuesday and will be a key component of the midfield.

Pedri will start in front of the pivot on the night and look to produce a masterclass. The youngster has a lot to prove once again but is still an undisputed starter for the side.

Back in his advanced role, Frenkie de Jong will complete the midfield. The Dutchman was forced into a deeper role in the last game and could not play with his usual attacking flair. Against Levante, de Jong will be up for his regular duty once again.

Antoine Griezmann had a quiet night against his former side, sparing the two shots on target. The Frenchman has earned his place in the starting lineup in recent weeks and will look to get back to his best for the last three matchdays.

Lionel Messi could have scored one of the best goals of his career against Atletico Madrid but had it denied by an equally spectacular save by Jan Oblak. Heading into the last three must-win games, the Argentine will be more crucial than ever. Much of the goal scoring responsibility still lies with the captain, and all eyes will be on his magical feet again.

Ousmane Dembele can add a lot to the attack if used judiciously and given enough time to settle in. The Frenchman could be brought on around the hour mark to make his mark.

Ilaix Moriba has seen a trend of receiving game-time in every game off-late. Tuesday will be no different as the youngster will come on in the second half. And if reports are to be believed, Riqui Puig might get a chance as well.

Martin Braithwaite returns from injury and could see minutes towards the end chasing a goal to seal the deal.