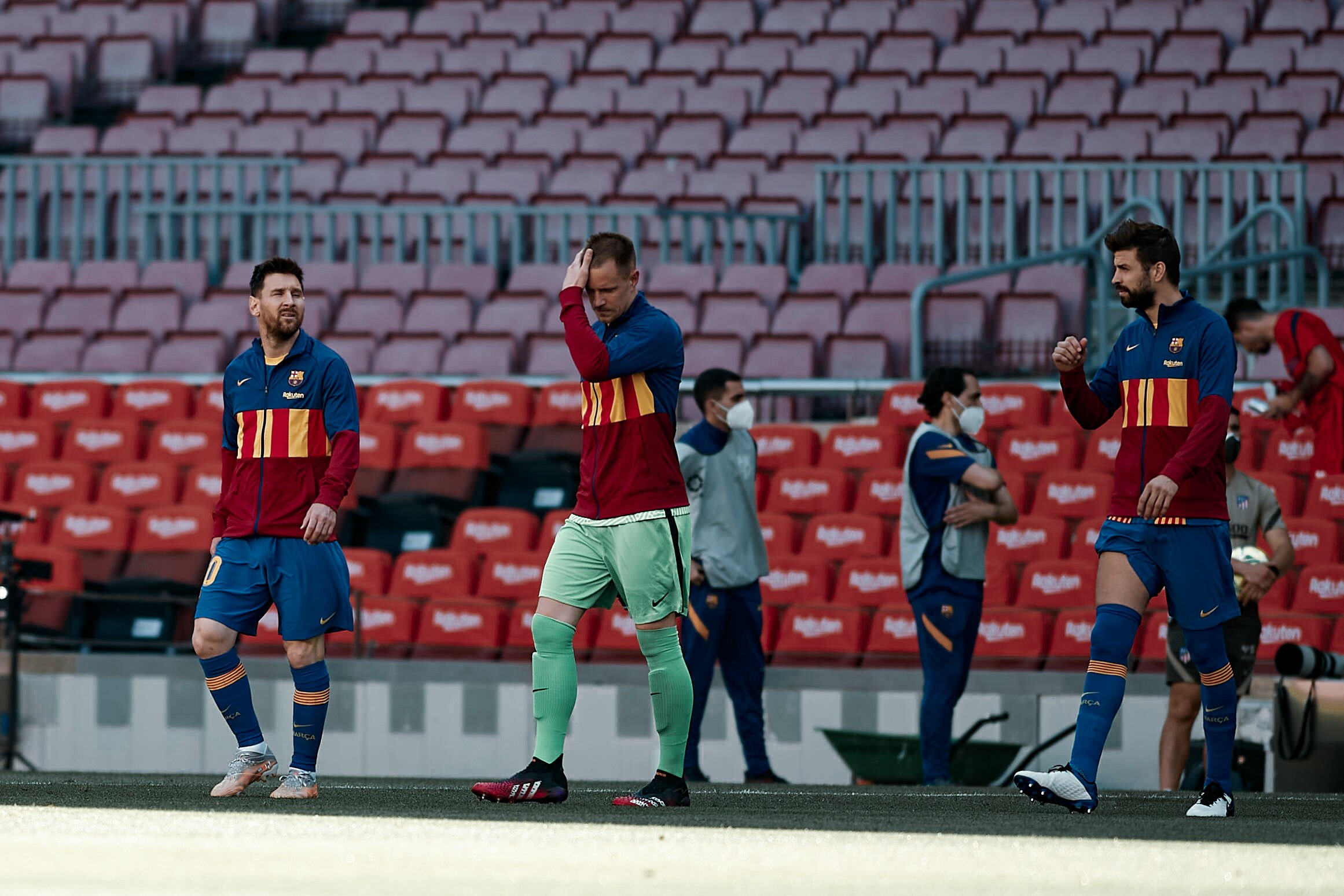 On Tuesday night, Barcelona will travel to the Estadi Ciutat de València to play Levante in hopes of keeping their La Liga aspirations alive.

The 2020/21 La Liga race continues to be as unpredictable as ever, keeping fans on the edge of their seats with only three games left. An exciting weekend saw first-place Atlético Madrid draw 0-0 with third-place Barcelona and second-place Real Madrid draw 2-2 with fourth-place Sevilla.

With those results, the league table remains the same heading into the final three games, and rather astonishingly, Barça’s title hopes aren’t gone yet. Granted, they need both of the Madrid sides to slip up and lose more points, but at this point, anything is possible. Regardless of what the other teams do, Barcelona still have to win their remaining three games. If not for keeping in contention for the title, then for finishing a turbulent season on a high.

Their opponents Levante are sitting 13th on the table, but no one can be overlooked during this home stretch. Les Granotes have had a horrid run as of late, winless in their last five outings, but they have had a fairly decent season, on par to finish near where they did in 2019/20 (12th place).

The last time these two faced off against each other was in mid-December, with Barça winning at home. The Catalans dominated the match, earning 78% possession and garnering 24 shots and 13 on target, but they still only won 1-0. Furthermore, playing away at Levante has never been easy, with Barça losing two of their last three visits.

What to expect from Levante?

In all, Levante’s season has had its ups and downs. Led by Paco Lopez, they started poorly, earning a possible 13 points out of 30. But, they followed that with a much-improved stretch, winning 24 out of 45 points (six wins, six draws, and three losses in 15 games), and going undefeated in all competitions for ten games to start the new year –  including beating Real Madrid 2-1 and Atlético 2-0. Notably, they also made it to the Copa del Rey semi-finals, only to lose to Athletic Bilbao.

Nevertheless, they have fizzled out since March, losing eight out of their last eleven matches. As such, Les Granotes find themselves nine points off from the relegation zone with three games to go. But, it’s safe to assume that they will live to see another season in the First Division.

Paco Lopez typically lines his team up in a 4-4-2, opting for a style that is full of energy and is direct. They are spearheaded by veteran and captain José Luis Morales, who has a team-high 13 goals and six assists this season. The 33-year old is coming off a brace against Alaves last week. Behind him is fellow forward Roger Martí with 13 goals and two assists, but the team only boasts two players with double-digit goals.

Levante are in the middle of the pack not only in the table but statistically as well. They have the 13th worst defence in the league, 12th best attack, and are overperforming their Expected Goals tally by 1.96. Impressively, they rank ninth in terms of Progressive Passing Distance and overall possession (51.9%), and eighth with Passes per game into the Opponent’s Penalty Area (8.40). Furthermore, as a team, they have completed the sixth most successful dribbles per game this season with 10.1.

Defensively, Levante presses the seventh most times per game in La Liga and have the fifth highest tackles plus interceptions (26.8).

Offensively, their midfield is full of creativity with the likes of José Campaña, Rubén Rochina, and Gonzalo Melero. Additionally, their fullbacks get high up the pitch and look to send crosses into the box. Despite their mid-table position, Levante offer more of a threat than meets the eye.

Despite dropping points in three of their last six La Liga matches, the Blaugrana miraculously still find themselves in the title race. With three games left, all they can do is win them all and hope for the best.

Against Atlético Madrid at the weekend, Barça did enough defensively to keep their opponents at bay – thanks to heroics from Marc-Andre Ter Stegen and a last-ditch tackle from Clement Lenglet – but their midfield and attack looked like a shell of themselves for the most part. Optimistically, it was their first clean sheet in five league matches.

The Catalans’ last seven league matches have been tight, winning only one game by more than one goal. Furthermore, the win against Getafe that finished 5-2 was a single-goal game until the 87th minute.

On Tuesday, Barça will have to reignite their league-leading attack and look to be more clinical than they were the first time they played Levante in December. In that match, Barcelona finished with an Expected Goals value of 2.62 but only put one past Aitor Fernandez.

Koeman will likely opt for his favored starting eleven and 3-5-2 formation. While the set-up has done wonders for Barça in 2021, providing more defensive stability and bringing the best out of their wing-backs, many have wondered if a switch to a 4-3-3 could shake things up for the better. Nevertheless, Koeman will be looking to stay consistent in these final matches.

In goal, Marc-Andre Ter Stegen will undoubtedly start, coming off a dominant performance against Atléti. The German shot-stopper made six saves, five of which came from shots inside his own box.

The three centre-backs in front of him should be Lenglet on the left, Gerard Piqué in the middle, and Ronald Araujo on the right. While Oscar Mingueza has been a stalwart over the last few weeks, Araujo replaced him midway through the last match and dominated. Although the Uruguayan has been less-than-stellar in a three-man backline, his sheer strength and tackling ability will be key against Levante.

Jordi Alba will surely start at left wing-back, but there are questions about who Koeman will put on the right. Sergiño Dest showed his flair against a solid Atlético defence, but he was still subbed off for Sergi Roberto. As such, who starts against Levante remains an enigma, but the young American has proven to be more of a threat going forward and taking opponents on.

Sergio Busquets was taken off against Atlético for a concussion precaution after colliding with Stefan Savic, but the Spaniard was spotted in training earlier today and has made the squad list. His importance has been reinstated this season, and Barça’s midfield was not the same after he left the game. In front of Busquets will likely be the ever-present Pedri and Frenkie De Jong, but maybe the forgotten Riqui Puig has warranted a start.

Lionel Messi put on another fantastic performance for the Blaugrana against los Rojiblancos, but his forward counterpart Antoine Griezmann had a night to forget. Hopefully, the two will get back to their goal-scoring ways.

Despite the constant threat of Levante’s creative midfielders or the talismanic Morales, the player to watch is goalkeeper Aitor Fernandez. Admittedly, Fernandez has only made one start in the last three games, but Paco Lopez may choose him due to his impressive performance from the first time these two sides met.

Last season, the 30-year-old reached new heights as he ranked first in the league, with most saves and the second-highest Post-Shot Expected Goals minus Goals Allowed (PSxG-GA), saving his team over an expected additional 8 goals.

He now finds himself tied for eighth with most saves and not in the top ten for PSxG-GA, but as he showed against Barcelona in December, he can be a wall all by himself. As mentioned, Fernandez saved 12 of the 13 shots he faced in that match.

If he can do enough to keep his team in Tuesday night’s game, Levante will surely have more confidence to go to Barcelona and do some damage.

Previous meetings: Barcelona – four wins, one loss (8 goals for, 4 against)

Travelling to play Levante is never an easy fixture for Barcelona, evidently as they have lost in three of their last four visits, but they should be able to break them down and prevail. Nevertheless, their shaky defence will likely concede, but the attack should still overpower Levante’s average backline. The team will be motivated to end the season on a high and get back to their goalscoring ways after being shut-out against Atléti at the weekend.