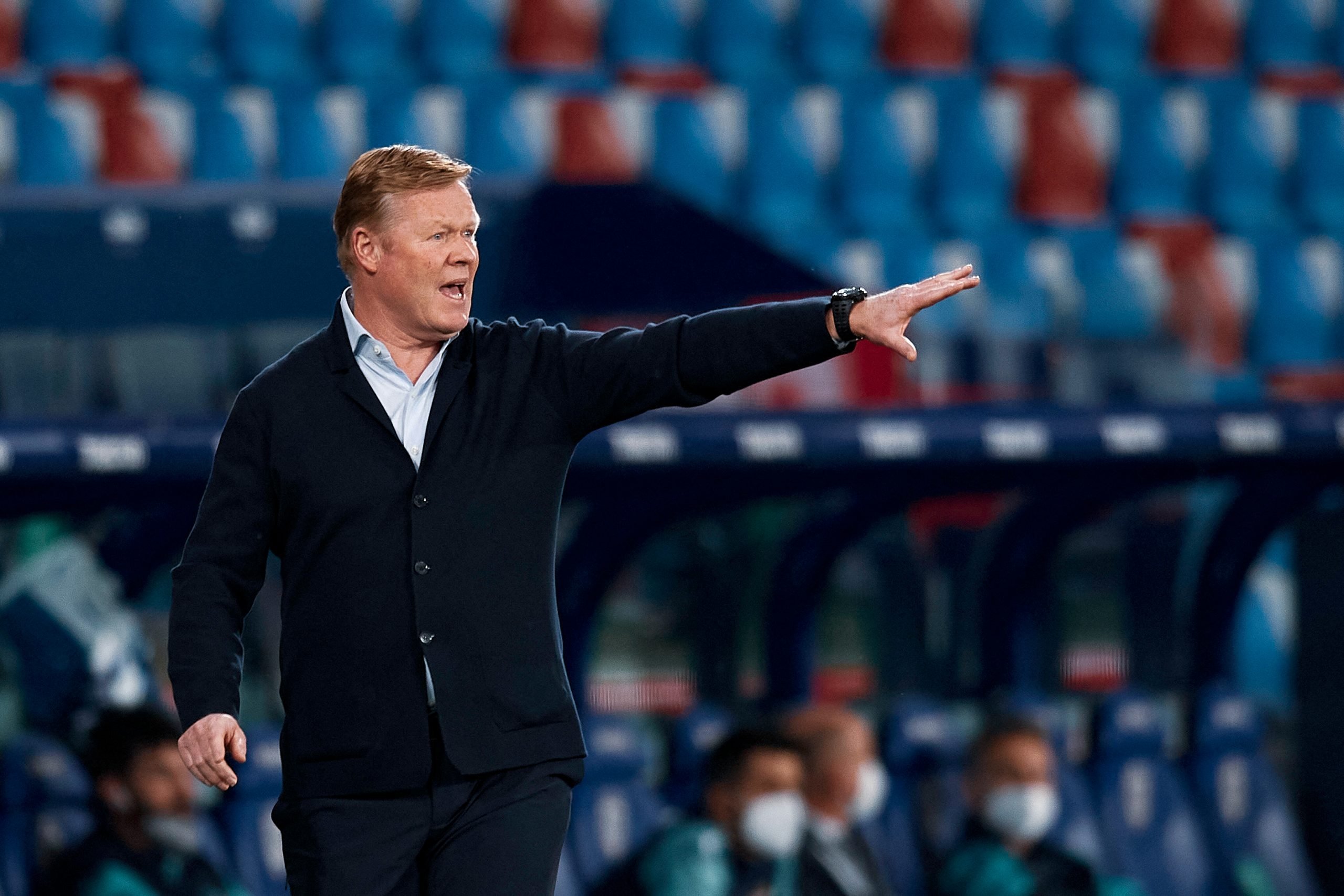 Over the course of the season, Ronald Koeman has failed to come up with elements of surprise, often making his strategies too predictable. He must learn to stay ahead of the curve to keep his tenure at Barcelona afloat.

Life comes at you fast in the hot seat. From being hailed as Barcelona’s guardian angel this season to falling out embarrassingly in the race for La Liga in the span of just a few weeks, it’s safe to say Ronald Koeman has endured a turbulent season, one that arguably epitomized his tempestuous nature best. Dreams of a double felt oh-so achievable after the triumphant Copa del Rey victory, with merely a pinch of equanimity required in the final eight La Liga games. Unfortunately, all that flexibility and courage Koeman once displayed with his starting XIs fell apart like a dry cake.

Instead of rectifying the issues in games where the result was not an appropriate summary of the match, the Dutchman’s stubbornness to repeat the same set-ups, set of players and ideas backfired, reminiscent of the start of the season when he refused to move on from his 4-2-3-1 formation.

Marring the heaps of progression at the beginning of 2021 when the manager was open to experimenting with various systems and seemingly turned over a new leaf, choosing to be pragmatic and showing a lack of proactivity in the final spell of the season saw Koeman cling onto the fickle finger of fate, shunning out his more risk-taking personality.

After stringing several encouraging performances in the second half of the season, the two fateful hammerings against PSG and Sevilla in quick succession turned out to completely undermine the achievements of Koeman’s 4-3-3 set-up, making it glaringly obvious that the defence would be seamlessly caught outnumbered in transition, with the Blaugranas notably struggling against high pressing sides. If the attack provided a fast, manoeuvrable, and thrilling drive, the defence was that one loose screw capable of smearing the entire experience.

Just as Koeman had shown previously when push came to shove, change within his ideologies were imminent. Consequently, the 4-3-3 was replaced by the unconventional 3-5-2 formation against Sevilla in La Liga, having previously just lost 2-0 in the cup.

It yielded significant results against the high line of Lopetegui’s men, which gradually became a mainstay rather than a temporary remedy. Culés visibly admired Koeman’s introduction of the formation initially – the results were there, the team was fresh, everything fell into place.

However, his desire to stick true to one approach until it completely malfunctions has proven detrimental in the long run, as has been the case lately. The moment Koeman starts placing impulsive faith in the system he has currently entrusted, his ideas become awfully foreseeable.

Exhibiting a shortage of willingness to be tactically flexible when cracks are decaying, and certain oppositions require different treatment has unquestionably been Barça’s death knell. As much as Koeman’s improvement in the team’s mentality has been evident – owing to the fact that the Blaugranas manage to typically bounce back after gruelling setbacks –, he froze when it mattered most, and not only in the big games; but also in the crucial stages of the season.

With a tired group of players whom he continued to excessively rely on, a talented bench that he refused to bat an eye towards – Riqui Puig, one of the many rejected individuals – and questionable in-game management, his inability to meddle with his team selection paid testament to his growing sense of fear.

Treating the final 8 games like one final arguably encapsulated Koeman’s impotence to sow the seeds for success. Although the former Everton manager had a clear grasp on who his best players were, reusing them like a bar of soap and refusing to integrate players actually suited for their designated position dismantled the structure on various instances.

The likes of Puig, Junior Firpo or Braithwaite have been cold-shouldered innumerable times by Koeman, and to make matters worse, Koeman’s non-acceptance of such players has led to starters playing in positions they may not be familiar with or substitutes occupying roles that completely destabilize the side. An example could be made of just the recent encounter against Levante; the ridiculous obsession with maintaining a 3 at the back system while bringing on a full-back for a centre-back as well as attempting to defend a lead without a high line went in complete contradiction to the obligations of the 3-5-2 formation.

Individually, there were errors certainly to be wary about, yet collectively, the club was a mess, which came as a result of taking a 2-0 lead for granted. Most performances from Barça in the previous month or so have shown that the club struggle to replicate their energy or exuberance after proceedings – the recent encounter being another prime example.

Instead of bringing on fresher players, without the desire to maintain healthy spells of possession, the goal was concerningly clear: the visitors were half-heartedly entering the opposition half as the dysfunctional state of the team branched out to all departments.

The substitution of Sergi Roberto, who has been in his worst form ever at the club, exposed several vulnerabilities on the right flank too. While reinforcing the back-line with three centre-backs led to the Catalan giants playing flawlessly against the likes of PSG at the Parc Des Princes or Sevilla at the Ramon Sanchez Pizjuan, it was clear as daylight that not every high magnitude fixture was going to compromise of opponents of similar mindsets. In the Clásico, Real Madrid exposed Barça’s three-at-the-back various times in the first half, consequently gaining a comfortable lead.

Nonetheless, shifting to the 4-3-3 after proceedings immediately helped Barcelona barrage past Madrid’s compact blocks and were possibly inches away from securing a draw. Such pliability midway through the game was worthy of admiration, but it was also a reality check for Koeman that positional play against more rigid sides should be the way to go. Just because the traditional 4-3-3 lost popularity in certain big games, Barcelona did not have to abandon their roots completely. All they needed was a foundation to build upon.

One could perhaps make the case that Koeman was simply playing to his strengths over the past few weeks or months, as opposed to being reactive. Though, truth be told, considering an interim system as a permanent solution to the club’s issues is where most problems stemmed from.

Had the Dutchman opted for a more positionally flexible set-up right from the beginning against Zinedine Zidane’s men or Diego Simeone’s cavalry, escaping defeats or narrow draws in both clashes might have been exceedingly plausible.

The unpredictable birth of the 3-5-2 against Sevilla in La Liga went onto provide a glimmer of hope and turned out to be a breath of fresh air against teams that do not soak up pressure. Yet gradually, even that started to leak flaws. Koeman clearly respects establishing a rhythm that can be everlasting, but his stubborn nature has prevented him from being flexible, and the aforementioned formation has simply put, not be feasible in the long term, especially when the side becomes overly predictable. Whether it’s a formation or simply the involvement of a player, he must know who and what ideology suits the occasion. Waiting for results to stop going in his favour should not be accepted; Barça must be ahead of the curve.