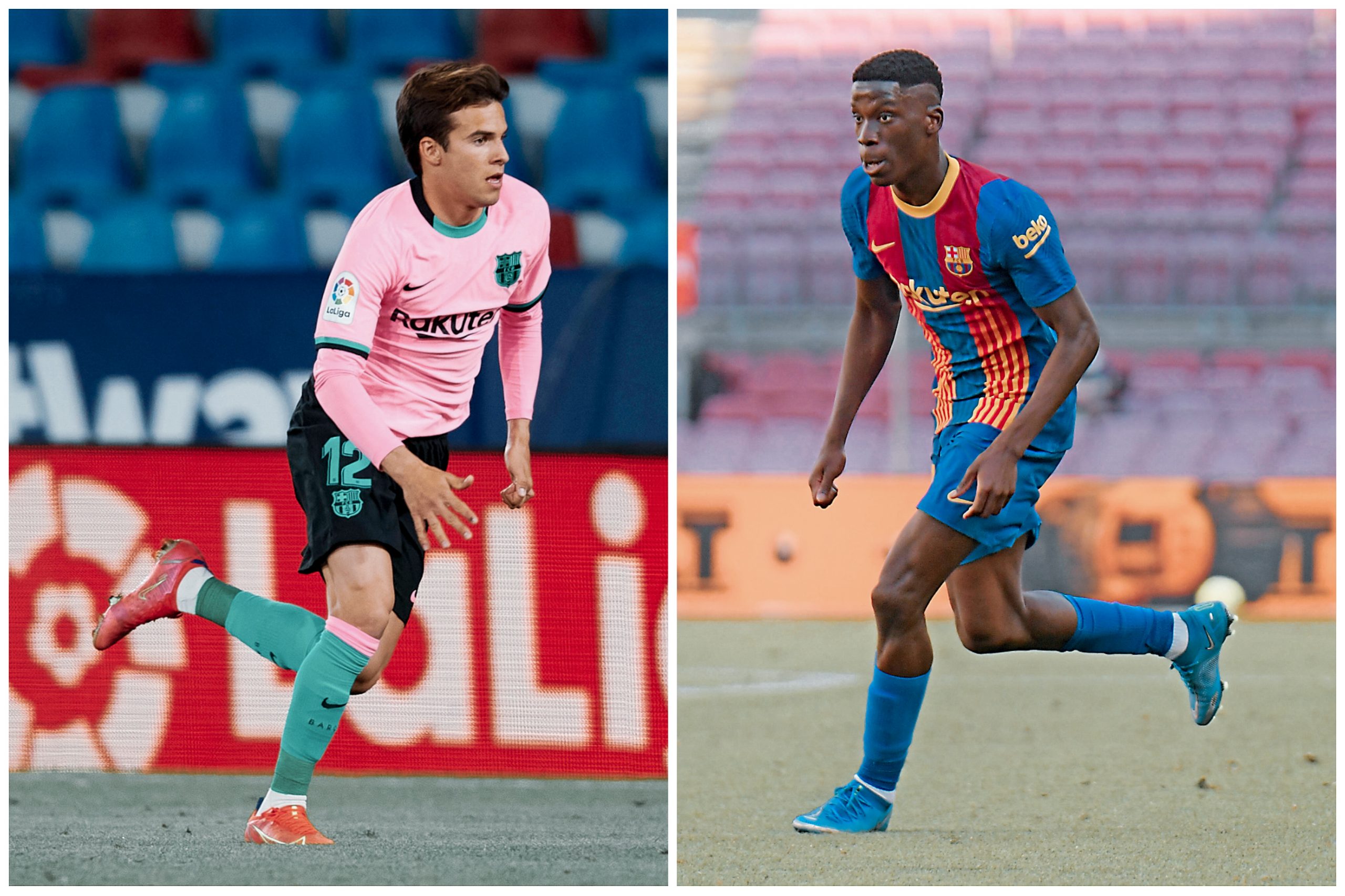 What are the key differences between the two young La Masia products? How do their strengths and weaknesses impact their place in the squad?

Riqui Puig and Ilaix Moriba are two of the most high-profile midfielders to come out of La Masia in recent years. This season, both have ended up in the first team, but their individual situations have been quite different.

Late in the 2019/20 campaign, Puig seemed to have finally established himself as a key member of the senior side. However, since the arrival of Ronald Koeman, Puig has consistently been left out of the squad or off the pitch. Thus, this season has been by the worst for the Spaniard in years when it comes to playing time.

On the other hand, Ilaix has just been receiving his first taste of top-flight football. Koeman also seems to have more trust in the teenager than he does in Puig.

Should this be the case, though? To answer this question and consider how the two should be utilized in the team, we will compare their statistical profiles.

Both impressed at Barça B

Given the limited nature of Ilaix and Puig’s senior careers, it is definitely important to take their performance at lower levels into account. With their reputations in mind, it should not be surprising that both midfielders put up some dominant numbers when playing in the Segunda B.

For Barcelona B in the 2019/20 season, Puig was absolutely dynamic. He got into some good goal scoring positions and played many incisive passes into the box. On top of that, his ball progression was by far his biggest strength. Both in terms of passing and carrying the ball forward, Puig was one of the top midfielders in the division. In García Pimienta’s side, though, he was tasked with very little defending.

Looking at Ilaix’s performance for Barça B earlier this season shows some similarities to Puig. Once again, Ilaix filled a role with very little defensive responsibility — those behind him, like Jandro Orellana and Nico González were more active in this department. Ilaix also showed ball-carrying prowess. While Puig did more driving forward in open space, Ilaix matched him in one vs one take-ons.

Elsewhere, some of the key differences between the two start to emerge. For one, Ilaix got into the attacking penalty area himself far more often than Puig. Conversely, Puig had a much higher volume of progressive actions, while Ilaix’s progressive passing, in particular, was low compared to other centre midfielders in the league.

This is where their two distinct profiles become clearer. While they shared some traits at this lower level, Ilaix generally positioned himself higher up the pitch to be an outlet in the box, and Puig acted as much more of a metronome and line-breaker during build-up play.

Using principal component analysis (PCA) to compare the metrics of the La Masia products to other midfielders across Europe can add more context. For instance, Riqui Puig’s statistical performance in the 2019/20 Segunda B season was similar to Napoli’s Piotr Zieliński, Chelsea’s Mateo Kovačić, and Lyon’s Houssem Aouar in their respective leagues.

Among 2020/21, Ilaix’s top matches are Tiemoué Bakayoko at Monaco, Suat Serdar at Schalke, and even Jude Bellingham at Birmingham City. Puig’s closest matches show further evidence of a low-centre-of-gravity, progressive conductor. At the same time, Ilaix’s reflect more of an all-round presence who provides runs into the box from midfield. At a higher level, these differences can be highlighted with even more clarity.

Contrast in the big boy leagues

Examining the youngsters’ metrics in La Liga itself provides more insight. Given the level of competition, it will also help to better gauge how the two will model their games going forward.

At the top level, players lose the benefit of having maturity or physical traits far ahead of their peers. The game speeds up, and opponents are stronger and smarter, meaning that a young player will most likely start to focus more on their main strengths.

So far in their La Liga careers, the differences between Puig and Ilaix certainly back this up. Granted, the sample size for both of them is small (871 minutes for Puig, just 403 for Ilaix), so their numbers must be taken with caution, but they do seem to reflect how the two perform on the pitch.

When it comes to getting into advanced positions and looking to score, Ilaix is definitely more active. This has been seen several times recently, as the teenager will venture ahead and join the forward line, looking to be an outlet for Barça’s creators.

In terms of supplying the final ball or creating a chance, Puig has better metrics. His vision and weight of pass are undoubtedly more developed than Ilaix’s at this stage. Furthermore, the Spanish U-21 international has the technical ability to disguise his passes and misguide defenders.

On the edge of the penalty area, Puig opens up his body to the right but cuts a vertical pass through the backline.

Then, when it comes to involvement in build-up play and progressing the ball from deep, Puig is by far the most effective. Once again, his vision and technique allow him to pull off difficult passes. Puig plays the ball through an incredibly tight window to find Arturo Vidal between the lines in the visual below.

He is also a very active ball carrier when given the chance.

Finally, Ilaix is clearly the stronger of the two when it comes to ball winning. He combines his long frame with good anticipatory skills to close down passing lanes and win the ball off dribblers.

Even at such a young age, the Guinean-born midfielder is an imposing figure. As he becomes more accustomed to the timing and angles of the senior game, he will become even harder to beat. As shown below, Ilaix closes down Mikel Oyarzabal, who is receiving the ball at the top of the penalty area. His length gives Oyarzabal very little space to manoeuvre, and he is able to put in a challenge and win the ball.

Comparing the two players makes it clear where their individual deficiencies lie. Translating that over to the pitch, one can see how managers have tried to utilize both Puig and Ilaix in ways that maximize their strengths. With that in mind, it should be clear that the better choice for the side depends on the context demanded in a match.

What does this mean for their places in the team?

Given the contrast between their profiles, it should not be a matter of Puig vs Ilaix to stay in the squad. Not only that, but it would be unwise to push out any player of their age, talent, and connection to the club.

Instead, Koeman should be able to recognize different opponents and game states where the team would benefit from rotating Puig or Ilaix in. Even if they are not consistent starters at the moment, both can have an impact every few games or as a substitute.

If more of a progressive, line-breaking presence is needed to break down a compact defence, Riqui has proven to be capable of providing a spark. In Barça’s 2-2 draw against Atlético Madrid in June of 2020, for instance, his 13 progressive carries were the second-most in the squad, while his five successful dribbles and three shot-creating actions were both the third highest.

Then, Ilaix can be utilized when someone is needed who can join the forward line and push the opposition defence back with runs into the box. In just 19 minutes in the last El Clásico, Ilaix racked up three shots, trailing only Messi, and 0.2 expected goals, behind only Messi, Óscar Mingueza, and Ousmane Dembélé. He very nearly scored a late equalizer with a volley that struck the crossbar.

Ilaix’s stature can also be useful when a more disruptive presence is needed. If the opposition midfield is looking threatening, he can act as a bit more of a stable ball winner.

While they are ultimately competing with one another for minutes, it is not as if there will be one definitive winner across all scenarios. Either can be subbed into a match or started to inject fresh legs and new ideas into the side.

Despite being at different stages of their development, the future should hopefully hold great things for Puig and Ilaix. Both achieved immense success at the youth level, quickly rising through the ranks, and have shown flashes of excellence in the first team. Currently, they can serve to teach Barcelona supporters a few lessons.

The first would be that La Masia does not have to produce one specific type of player. While Puig fits the more traditional, diminutive mould of a Barça interior, Ilaix has been brought up through the same ranks and learned to see the game in the same way. Thus, not every player needs to perfectly match the build and playstyle of a legend like Xavi or Andrés Iniesta to be great.

Additionally, they show the need to recognize balance and context when evaluating the squad. The two youngsters excel in different areas to the extent that discussions of who is (or will be) better outright or who should be getting all the minutes is not very valuable. There is no need to reject or slander one of them and thus push for their unique profile to be lost.

Lastly, for Riqui Puig, hopefully, more trust and opportunities will come his way from the manager. Whenever he has played at the top level, he has consistently put up some of the best progressive and creative statistics among all centre midfielders in Europe. At the end of last season, in particular, he looked incredible against some top tier opponents and seemed ready to be a rotation starter at the very least.

This season, though, for one reason or another, things have not gone well for Puig. With only two La Liga starts and an abundance of rumours swirling around, his growth has undoubtedly been hindered. For such a promising, passionate player, it would surely be very beneficial for the manager to integrate him more next season.

If Ilaix and Puig continue to develop on the right trajectory, along with Pedri and Frenkie de Jong in the first team, and the likes of Jandro Orellana and Nico González in the B side, Barça could have a ridiculous amount of midfield talent in the future.