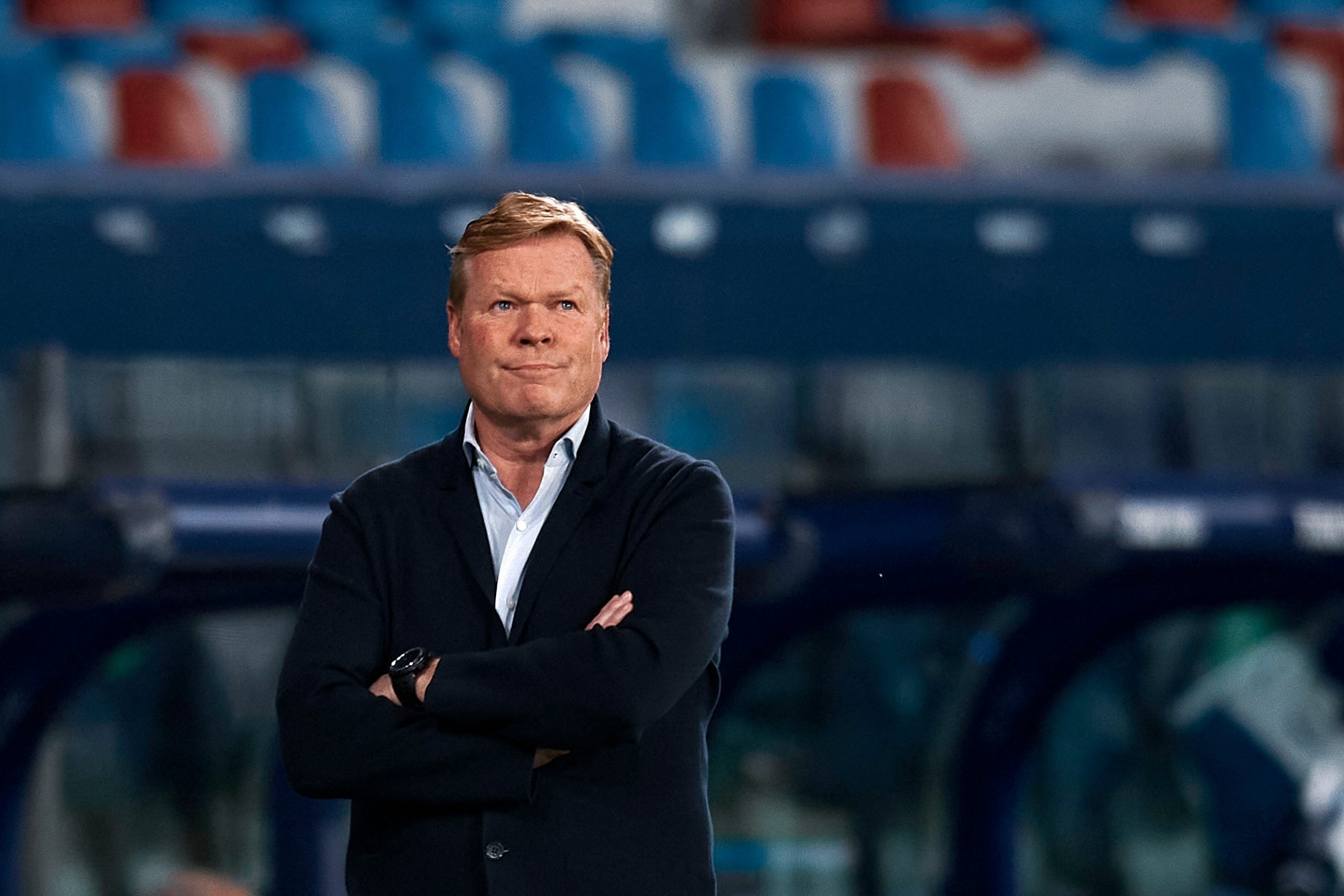 The world of football is a cornucopia of emotion, a fine balance between praise and criticism. To say the average football fan is fickle is an understatement, with a tide of criticism washing over football’s characters from one minute, to going back out in the form of praise the next.

Ronald Koeman’s tenure as manager of FC Barcelona has been a whirlwind of emotions. The root cause of this is undoubtedly the strange set of circumstances under which the Dutchman was appointed.

Most football clubs and fans in modern times lack patience but still proceed with the long-term project approach just for it to be cut short – Frank Lampard’s time at Chelsea being a prime example. Barça did quite the opposite in the summer of 2020, appointing Koeman to stop the rot but only for a single year with the small possibility of a second, due to the upcoming presidential elections.

In the meantime, Koeman has done exactly what was asked in what was penned down as a transition season before a ball was even kicked. The team has won a trophy, the squad’s mentality has shown a lot of positive change, the squad looks happy to be in Blaugrana, and the youth players have been given a chance, Riqui Puig excluded.

Under all this optimism, however, lies an important layer of pessimistic facts. Koeman is limited when it comes to tactics compared to the elite of the coaching world. His in-game management is ineffective, as proven by Barça’s abysmal record in big decisive games this year. All of which, are components that elite coaches make their names off of. But unfortunately for Koeman, he lacks them all.

Plenty of reports surfaced on Monday that doubts are growing among the board members over Koeman’s continuity for next season regardless of whether La Liga is won or not. This will not surprise many, as the evidence has been present all season on why Koeman’s reign should only be a single year.

“A club legend and Barça hero at Wembley who gave the fans their first European Cup, Koeman is coming back to the Camp Nou”— was how the club’s marketing team presented Ronald Koeman to the world.

Koeman was brought in to stabilise the squad, and the club hoped his playing career would demand the respect of the players and get rid of the complacency that had attached itself to the team’s spine. The noise surrounding the appointment was all very similar. Is he good enough, specifically tactically good enough, to lead Barcelona back to the top?

Throughout the season, Koeman has proved a lot of people’s initial assumptions wrong. The back-to-back games against Sevilla come to mind as examples of the Dutchman’s tactical know-how, but a simple switch to a three-at-the-back formation is not enough to get the fans eager for more. It was, after all, Koeman’s third attempted experiment, having abandoned the 4-2-3-1 and the 4-3-3 previously.

The idea behind the formation was to secure more defensive stability with the back three, and two wingbacks would press the opposition resulting in winning the ball higher up the pitch. Koeman himself labelled the formation “risky”, and sure enough, those risks have begun to show.

Barcelona have continuously had their initial press bypassed in recent games. From there it only takes one pass, and the opposition is through usually leaving three on three. The first half against Real Madrid at Valdebebas is a prime example, where the Catalans struggled heavily with fast transitions and long balls to Vinicius Junior.

Koeman’s inability to tweak the system has had dire consequences, having dropped seven points over the last four games and it is a worry that the Dutchman has let it continue for so long.

Simply leaving one of the fullbacks a little deeper gives the defense added protection during counter-attacks whilst losing nothing in the press if the two other lines are set up correctly, or even using Sergio Busquets in a deeper role similar to that of Jorginho’s at Chelsea and then use the fullbacks to press. The solutions are there, but Koeman seems to press on with his current methods and formation, a setup that causes many problems for Barcelona as a whole.

One concern the board reportedly has is the 3-5-2 formation Ronald Koeman is currently using, as it goes against the 4-3-3 system ingrained into every player at the lower levels at Barcelona. Barcelona has long been associated with the 4-3-3 with minor modifications made here and there— Pep Guardiola’s false 9 role for Lionel Messi being an example.

The Blaugrana have long boasted about having one of the best academies in Europe. Having lost some of its magic over the almost-tyrannical presidency of Josep Maria Bartomeu, Joan Laporta has claimed he will restore it to its former glory in his second tenure at the club, following a glorious first stint.

For this to work, it is necessary to have a manager willing to give the graduates a chance, a box Koeman ticks. However, the Dutchman’s current setup does not allow for easy integration into the first team dynamics.

The graduates of La Masia are coached under a specific set of values and ideals, all revolving around the 4-3-3 and, therefore, at present, are not fully prepared to make the jump up to the first-team XI because of the clash in systems that disturbs the process.

If a winger, for example, was to burst into the team in its current formation, where would he fit? Of course, Koeman can go to a 3-4-3 but the constant back and forth from a front two to a three is not exactly stable for a consistent season, is it?

This is the problem the board must consider when making their decision; if Koeman’s inability to make the 4-3-3, a mainstay goes against the setup that has been institutionalised within FC Barcelona.

The “big games” are not important because of their magnitude. Sure, beating Real Madrid and Bayern Munich is always pleasant, but the importance stands with the fact that winning them leads to titles and failure comes with defeats. This season that fact is exemplified through Barcelona.

Heading into the final group game of this season’s Champions League, Barcelona did not need to beat Juventus or even draw. They could lose by a scoreline of 2-0 and still finish top. An average Juventus side won 3-0 at the Camp Nou, and the reward would be facing Porto in the next round instead of Paris Saint Germain.

Results like this are season-defining, and with the knockout phase being played during a period where Koeman’s team were in form, one wonders how far the Catalan side could have gone in the tournament. Ronald Koeman’s record against Europe’s elite this season concluded with one win in four, two being heavy defeats.

This form against Europe’s best has been no different in La Liga, with Barça winning just one in six against their fellow La Liga title challengers. The single point they gained against both Madrid sides this season is the worst return the club has seen since the 1964/65 season, a stat that can be highlighted as the main reason the Catalan side fall short of the title, should that happen.

The worries surrounding these stats are amplified further upon the realisation that it is not just big opponents that the Azulgranas have crumbled under but also big season-changing moments.

A draw with Cadiz in a period where they could have closed the gap to Atletico Madrid to just five points, a loss to Granada when they could go top of the league for the first time in the season, another slip-up against Levante and also the Supercopa final, are all moments that no culé will want to be mentioned again.

This is a major worry going into next season, as overall, the record outside of the Copa del Rey campaign would stand at merely three wins out of 14 big season-defining moments.

In contrast, whilst not performing up to standards this season, Real Madrid have a record of nine wins, four draws and one defeat in big games across La Liga and the Champions League. With four wins and two draws against their fellow La Liga title contenders being their ticket into this season’s La Liga title race.

When a case is being made against Koeman’s continuation at the club, this should certainly be at the forefront. If this record does not improve next season, it ultimately inhibits Barcelona from winning any major title.

Ronald Koeman’s reign as Barcelona manager has many similarities to Ole Gunnar Solskjær’s at Manchester United. Both have done their job and have helped their club’s progress. Still, unfortunately, they will always be seen as the small fish in a big pond, whilst fellow ‘super clubs’ have the best of the best. Managers with bigger credentials, such as Massimiliano Allegri, are waiting on the sidelines.

Koeman has done a tremendous job in turning Barca’s season around from where it was heading at the start of the campaign. It would feel unethical to sack him, but at a club many see as the biggest in the world, the Dutchman’s limited tactical prowess as a coach, failure to adopt the 4-3-3 and results in big season-defining moments are all major concerns going forward. While some believe he deserves another season, many are against the prospect.

A fair few reports now state that a decision will be taken at the end of the season, but there are pleasant sensations from both Koeman and the board.

For Joan Laporta, it might simply come down to Koeman not being his man and might desire to start his reign as president with a manager of his choosing. Culérs seem to trust Laporta, but does he really trust Koeman?