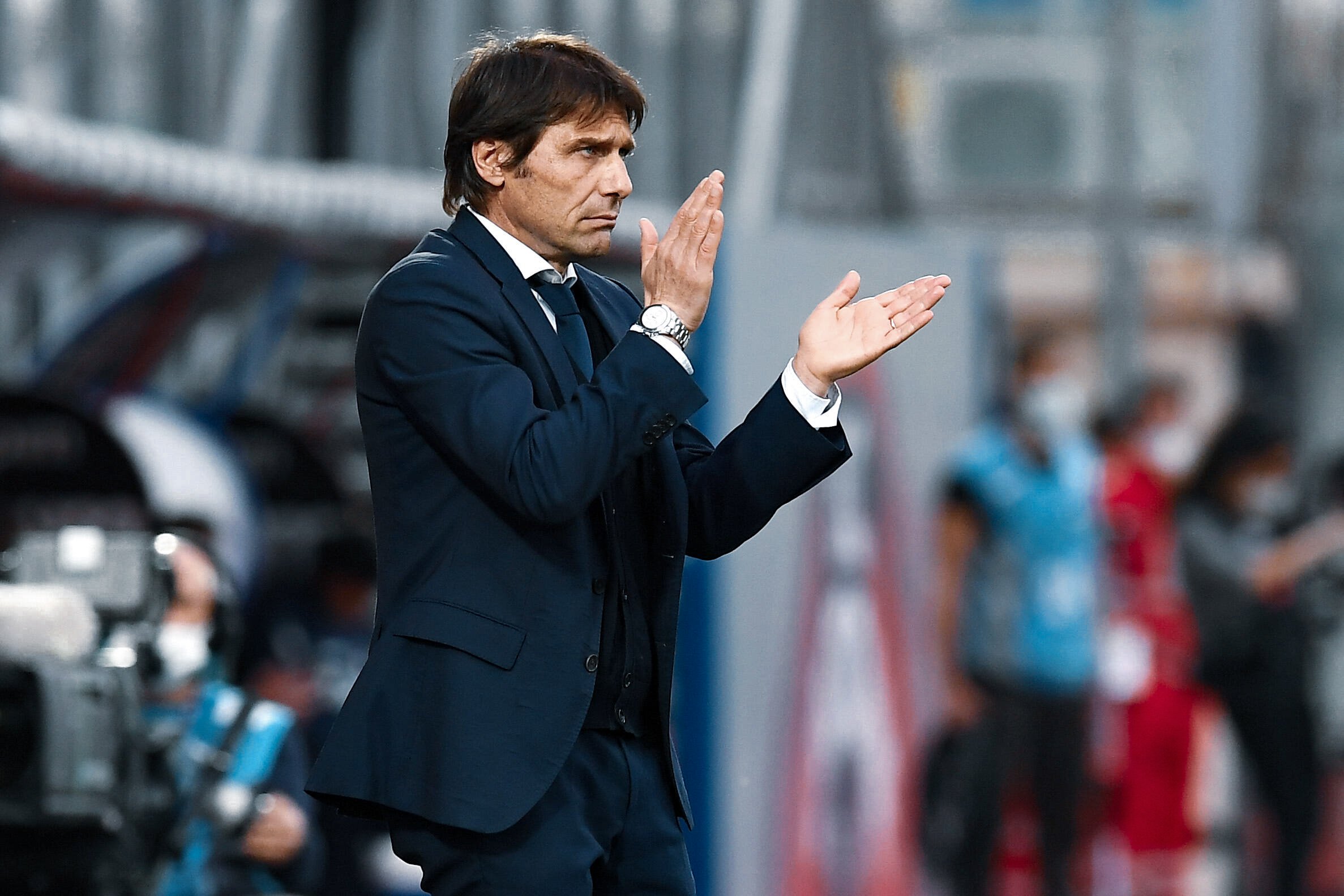 In the midst of a month with very few victories, rumours about Ronald Koeman’s potential dismissal have resurfaced yet again. The difference is, this time, they feel final.

When a manager’s reign is coming to an end, the signs are clear as day. Barcelona’s performances are at an all-time low, the squad looks disjointed, and they are playing without purpose, with plenty of problems remaining unresolved.

New reports are surfacing every day, placing the Catalans in the rumour mill with a series of managers. Names like Xavi, Roberto Martinez, and Andrea Pirlo have all been mentioned, but one proven candidate lurks in the shadows, currently without a club. That is, Antonio Conte.

In the following article, Barça Universal will explore whether the Blaugrana should pursue Conte, taking an in-depth look at his tactical approach, how that would fit in at the Camp Nou, and any potential shortcomings.

From player to manager

Before becoming a world-renowned manager, Antonio Conte had an extremely successful playing career. He made over 300 appearances across a 15-year span, captaining Juventus as they won the Champions League and multiple domestic titles. He also played at the 1994 World Cup and Euro 2000, finishing with Italy as runners-up in both.

After retiring, Conte moved on to the managerial scene. He struggled with Arezzo in his first stint in charge but followed that up by winning Serie B with Bari. A few seasons later, he returned to his beloved club Juventus, guiding them to an unbeaten season in Serie A, a back-to-back win in 2012-13, and a record-breaking 102 points in 2013-14.

Conte’s next stop was the Italian National Team. From 2014 to 2016, he notably led a (relatively) substandard squad to the Quarter-Finals of Euro 2016.

Following his run in England, Conte took over Inter Milan and helped the Nerazzurri win their first Serie A title in over a decade. Since leaving the Italian giants in May 2021, he has been patiently awaiting his next appointment, while Barcelona not-so-subtly look at replacements for Koeman.

Conte’s style is demanding, intense, and incredibly effective. His teams are well-oiled machines, fluid yet solid at their best. He is particularly known for his man-management, as there are countless anecdotes and stories regarding his fiery energy and ability to motivate players. Conversely, it can sometimes rub players (and management) the wrong way, leaving behind broken relationships whenever he leaves a club.

Tactically, Conte has been a pioneer for the resurgence of the 3-5-2 formation in European football. The blueprint he established with his early-2010s Juventus sides and league-winning Chelsea have since been emulated by various managers.

Utilizing the 3-5-2 (sometimes 3-4-3), Conte has played defensively, very attacking, and balanced, making him an overall pragmatic and flexible manager. In all, he prefers to play a high-tempo and direct brand of football, requiring squads full of pace and power. Still, his teams are not always high-pressing, as they often settle into a mid-block instead – but more on this later.

With his general tactics in mind, let’s take a look at how Conte’s teams play in more depth. In the build-up, centre-backs are key for advancing the ball up the pitch, whether through carries or long-balls. With the latter, they can look for on-going runners or target men like Romelu Lukaku at Inter Milan or Diego Costa at Chelsea. In addition, the number 6, Marcelo Brozovic for the Nerazzurri, plays a vital role in this stage as well, distributing possession and dictating passages of play.

Wing-backs – who basically play as wingers – are also instructed to push high-up. In fact, they are integral to attacks, offering width and constant runs down the flanks. In 2020-21, Inter’s first-choice wing-backs of Achraf Hakimi and Ivan Perisic combined for 24 goal contributions. They also tallied the team’s third and fourth most shots on goal.

In between the wing-backs are typically two or three midfielders who act as the engines of the team, both in terms of defensive pressure and offensive supply. Marcelo Brozovic and Nicolo Barella were stalwarts in the starting eleven whilst the last slot rotated between Christian Eriksen, Alexis Sanchez, and Arturo Vidal.

Up front, Conte has employed both a front three and a pair. At Inter, Lukaku and Lautaro Martinez were a formidable duo, totalling 49 goals and 18 assists. They were given freedom to roam and drop into midfield, which in turn would throw defenders off track and give the other space to score.

In terms of attacking play, Conte’s teams are, as aforementioned, extremely direct. His teams go from one goal to another at breakneck speed, needing only a few short, quick passes. Incidentally, Inter Milan scored more counter-attack goals in the 2020-21 Serie A season than any other team. This frequency also adds to the notion that Conte is not afraid to have his teams sit back and absorb pressure.

Defensively, Conte’s sides are not high-pressing. Looking at last season’s Serie A, Inter had the seventh-lowest pressure rate, per fbref.com. Instead, they would form a mid-block, allowing opponents to pass around the back, all while waiting to capitalize on mistakes or dispossess them using their compact shape.

Now the question is, how would his tactics (theoretically) translate to Barcelona? In many ways, Conte’s direct football would be a refreshing change of pace for a slow and dilapidated Blaugrana squad. Pushing that idea further, his potential starting lineup could include a three-man backline of Ronald Araujo, Eric Garcia, and Gerard Pique, along with attack-minded wing-backs Sergiño Dest and Jordi Alba.

The midfield trio would be Sergio Busquets, Pedri, and Frenkie De Jong, along with an attacking duo of Memphis Depay and Ansu Fati. Whether this squad at hand could play in his preferred systems is another problem entirely. Clear to most, Barcelona’s defence is not sturdy enough to absorb pressure, nor do they have enough pace to play on the break.

Positively, Conte could also bring balance and stability to a team that desperately lacks an identity. Additionally, Koeman proved last season that a 3-5-2 can work with the players at the club too.

On the other hand, some would oppose his pragmatic tendencies and apparent comfortability with playing on the break. Still, being solid defensively does not necessarily make him a defensive-minded manager.

One of the biggest questions that come with pursuing Antonio Conte is his reported salary demands and desires in the transfer market. In regards to the former, Barcelona are – for obvious reasons – in no position to offer any manager substantial wages.

The same point applies to the latter as well. If Conte wants a squad overhaul or mobility in the transfer market, the Catalans can simply not offer that either. Further, he is not exactly a stabilizing presence and could add to the distress already at the club.

It is also important to consider whether Conte is the right choice to lead a long-term project, one that necessitates patience and nurturing plenty of youngsters who need polishing and time to grow. Throughout his career, he has often been a short-term manager, rather than having prolonged exposure to one team.

Setbacks on the biggest stage

Despite winning multiple league titles, there is still one stain on Conte’s résumé: a lack of success in the Champions League. The furthest he has led a team is to the quarter-finals (Juventus in 2012-13), and he has had countless early exits with squads that have warranted deep runs.

Last season, his Inter side failed to make it out of the Champions League group stages– or even to the Europa League – as they finished last to Real Madrid, Borussia Monchengladbach, and Shakhtar Donetsk. That disappointing run saw them win only once.

Barcelona have not impressed in the Champions League either, but looking for a manager with a proven track record in the competition is important.

In all, wanting Conte at Barcelona comes down to whether one would rather prioritize (potential) short-term results, or exercise patience and think long-term. His credentials are nearly flawless and one can not argue against his merit as a manager or tactician.

After all, his résumé and tactical know-how speak for themselves, even if he has admittedly struggled on the biggest stage. However, he is not the optimum choice to stay put and help drag Barcelona out of the gutter – for good.

He may not be a long-term solution, but as a short-term fix, he stands shoulders above the rest. The only problem is, Barcelona should steer clear of short-term thinking.