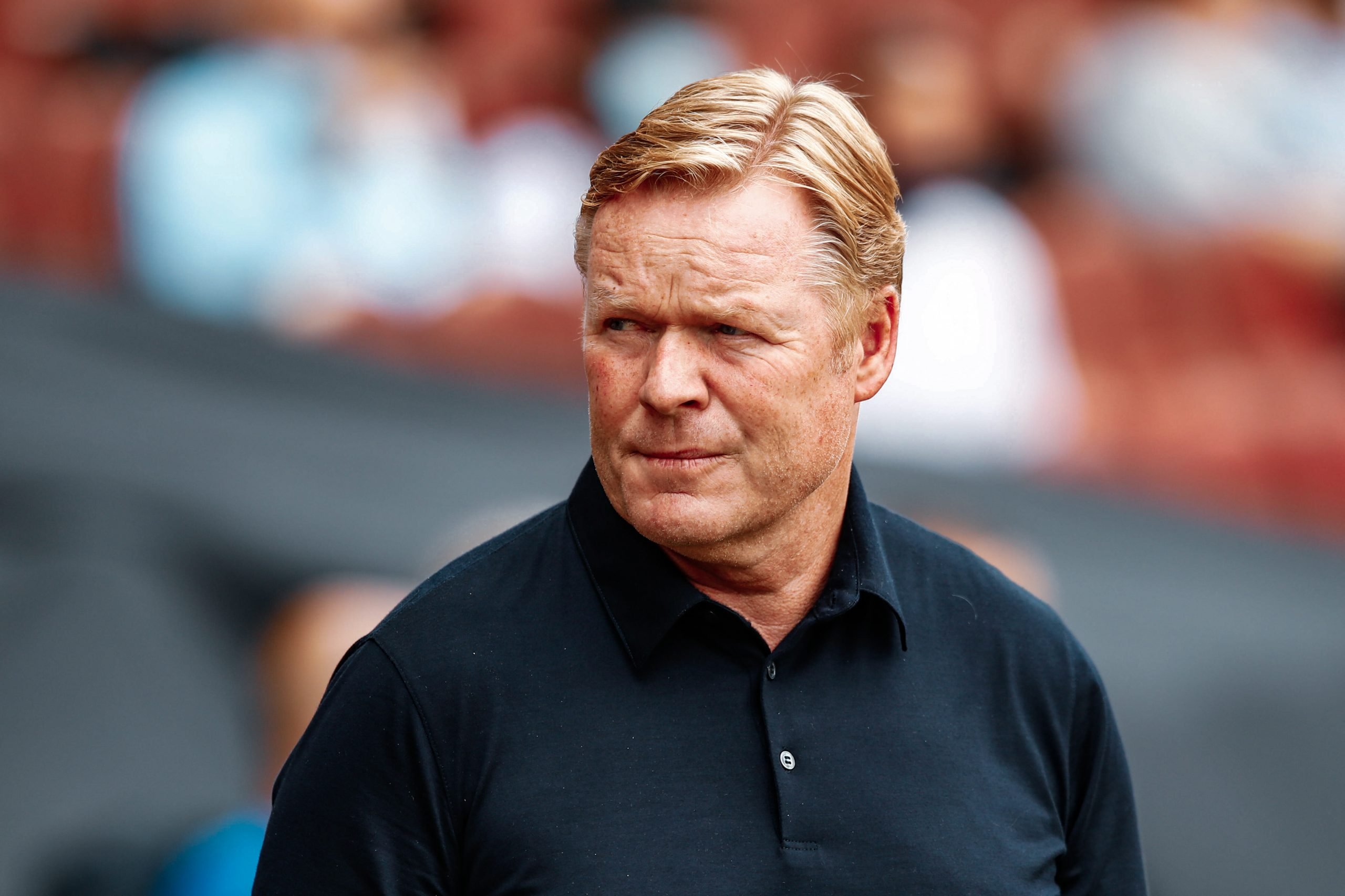 The beginning of the 2021/22 campaign was met with a lot of excitement and anticipation by Barcelona supporters across the globe, and rightly so. After all, it marked a new chapter in the club’s recent history, as the Catalans’ would, for the first time in two decades, have to cope without their talisman Lionel Messi.

Yet following a promising pre-season, Ronald Koeman’s men have failed to replicate their summer success in a competitive environment, in spite of a deceiving seven points out of a possible nine gained. In this in-depth analysis, we will take you through some of the basic but also more profound tactical deficiencies that have come to the surface thus far.

Time and again, people pointed the finger at Lionel Messi when discussing the absence of any creativity or unexpected actions in Barcelona. And truth be told, the telepathic bond that the Argentinean established with Jordi Alba was perhaps overused.

Not only that, the entire unit depended on Leo’s form and will, so risks were avoided in favour of full reliance on the main man. Nevertheless, here we are, with no such player on the roster, and the issue of predictability is yet to vanish or even improve in the slightest.

Which only goes to prove that the reasons behind the Blaugranas‘ inventiveness a — or the lack thereof — are not as superficial as initially thought. That begs the question: where do those complications actually originate?

One of the primary causes is the disregard for the midfield. The paramount importance of the central areas of the pitch for positional play is well-known, but for some unfathomable reason, neglected by the current coaching staff.

One would think that with the likes of Frenkie de Jong and Pedri capable of orchestrating Barcelona’s offensive actions as well as creative figures like Memphis Depay or Antoine Griezmann further upfront, the penetration of the opposing defence through the midfield would be encouraged.

Yet, in reality, that’s far from the actual case. Ronald Koeman has been adamant about using a back three with Sergio Busquets dropping into the heart of it. It severely compromises the midfield, which loses its numerical and positional superiority. Inexplicably, Memphis and Griezmann barely aided the situation, and even when they did, there was no opposing move from their teammates to generate a greater advantage.

With that in mind, it would not be naive to expect a certain degree of efficiency down the flanks. However, the defects expand to that area, too. Koeman has insisted on implementing a narrow front three, which means the fullbacks are the ones to provide the width required to unsettle the opponent and create space.

That is a constraint on the offensive output of the midfielders, as well as the defensive security of the collective. The absence of pure wingers Ansu Fati and Ousmane Dembélé is a factor, but the coach’s lack of faith in make-shift wingers such as Álex Collado and Yusuf Demir is no helping hand. And quite alarmingly, there’s still no sign of any desire to solve the problem.

The result? A negligible amount of clear-cut opportunities created and a very dull look to the team. Essentially, Barcelona relies on textbook actions that will are guaranteed to fail the test of time and become less fruitful with each passing game.

The destabilising spark is already missing in spite of an enviable selection of highly skilled personnel. Many of the Catalans’ moves seem arbitrary and not supported by a tactical vision or purpose. If not solved as soon as possible, the problem will only continue to torment the club.

Pressing: A flawed, yet unchanged structure

For many years, pressing has been a deterrent for Barcelona. From the moment that Luis Enrique departed, no manager has managed to instil an efficient system to confront the opponent in the earliest phase of play possible. Whatever the cause was, it didn’t bring about a pleasant outcome. The team’s attacking leaders developed a passive approach without the ball, letting their rivals move up the pitch unchallenged as a result.

To tackle those troubles, Ronald Koeman opted for an unorthodox solution. To be precise, he demanded a remarkable work rate from the midfield, which was forced to push high up the field to cover the ground lost.

Although it worked a handful of times, it also saw massive difficulties emerge against bigger sides. The advanced position of the midfielders left massive lapses between the lines, which were very often exploited. In practice, pressing efficiently with only less than 8 players proved an insurmountable task.

The departure of Lionel Messi was expected to force Barça into a reconsideration of their pressing scheme. Ronald Koeman could finally organise a proper entity that could regain possession in the most crucial moment: the exact point of the turnover.

If the first three games are to go by, though, have not provoked any significant increase in intensity or positional improvement. The problems endured the last term have, in fact, carried over to this season, which suggests that no attempt to overhaul the system has been made. It’s the same gaps between the midfield and defence and a similar absence of interest in counter-pressing. Alarming.

But how do Barça fare when it’s the opponent exerting that coercion? Well, quite frankly, not much better.

While it’s mainly plain sailing against passive sides, it’s against more aggressive entities that the Catalans’ flaws surface. The game against Athletic Bilbao was particularly representative in that regard.

Marcelino’s men were compelling in their collective actions, limiting the options and closing down the central areas. Neto, whose repertoire on the ball is far from admirable, was specifically targeted and successfully pressurized into errors.

In that case, what can be done in order to evade the opponent’s press? First and foremost, adjustment to the goalkeeper’s capacities is vital. Whether that means having an additional option at close range or generating advantages through a constant interchange of positions, adaptation to the conditions is the key to success.

The ball-carrying prowess of Frenkie de Jong, for instance, has not been utilized enough. His presence in deeper areas would not only add an extra player in the initiation phase but also enable the likes of Memphis or in the past Antoine Griezmann to join the midfield and create superiorities.

Following any defeat or unconvincing performance, huge waves of criticism are directed towards the players. To a certain degree, individual errors have cost Barça over time, but it’s crucial to understand that any such mistake tends to stem from a collective fault.

While players like Sergino Dest, Clement Lenglet and Jordi Alba are often targeted for their frequent slip-ups, they are also the ones to have suffered the most from Barcelona’s collective misfortunes. It would, therefore foolish not to scrutinize the roots of the problem in depth.

The defensive four and goalie are only the final test, and the ease at which the opponent bypasses the previous zones is heavily dependent on the defensive set-up introduced by the manager. The tougher the hurdles and traps, the more effective and the less physically demanding the overall process.

The most solid of sides have mastered the art of pinpoint-accurate spatial occupation, congesting the central areas but also not exposing themselves down the wings. Thomas Tuchel’s Chelsea is, in that respect, the ideal cross-section of the bunch. Under the German’s guidance, the English outfit has made strides in zonal occupation. They don’t crowd all areas but fill them wisely, protecting the vulnerable areas.

Compare those virtues to Barça, and the contrast is colossal.

Any defensive action is spontaneous and instinctive, thus uncontrolled. The midfield is often flat-shaped, which results in acres of open space for their counterparts to capitalize on. That creates a dilemma for the forwards – either to move central to squeeze down some ground but leave the fullbacks unsheltered, or stay out wide and face the respective consequences.

It’s a losing situation from any perspective. The failure to compensate for the space left by the centre-backs has also tortured us on numerous occasions. It’s a ludicrous amount of weaknesses in question. A grand total of 0/3 clean sheets looks disquieting.

The basic theory of positional play says if you control the space, you can control the game’s flow as a whole. In any phase of play, occupying the correct zones at the correct moment is a ticket to success, even more so if done by an entire unit. The aim is to create a strong rapport between two or many teammates by maintaining the correct distances and angles.

When in possession, it’s always better to hand him several options. Preferably, the possessor needs partners in horizontal, vertical, and diagonal destinations, each one of which, once reached, can impact the game differently.

When pressing, approaches vary depending on the coach’s tastes. They can be zonal, man-to-man, mixed, or inviting the progression towards pressing traps. Yet, the goal is common – to limit the opponent’s options and force errors. In defence, it’s all about disabling the vital areas, like the half-spaces and zone 14. All of these principles are vital but can only be mastered with time.

Without a shadow of a doubt, the start to the 21/22 campaign has been a rocky one for Barcelona. The opening games have already revealed sizeable flaws in pretty much all phases of play, many of which have haunted the Catalans in the past, too.

It would be ignorant to expect immediate improvement from a side so inexperienced and unbalanced. Yet, that’s not what we should demand; it’s perfectionism and determination to solve the troubles that will push us forward. Those tendencies are worryingly yet to be perceived.

What that is down to is a multi-layered mystery difficult to unravel. Those doubts notwithstanding, it’s never too late to change, and who knows, perhaps Barça’s fortunes are to take a U-turn soon.