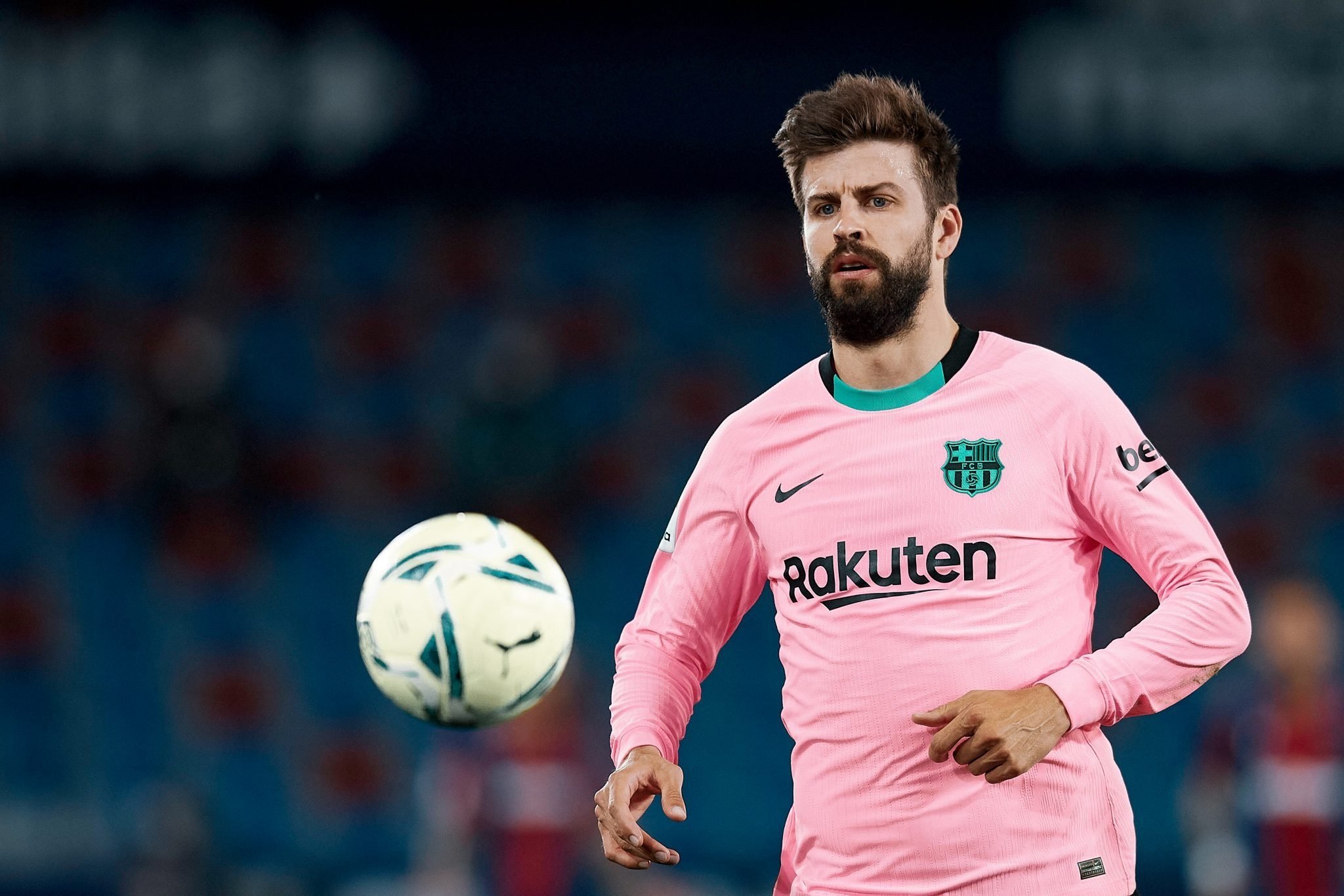 Barcelona has become a club notorious for treasuring and celebrating the careers of their veterans, especially the ones who fall under the label of legend. Gerard Pique has certainly earned the right to don this tag and is recognised not only for his contributions on the pitch but off it as well.

Labelled El Presidente by Culers, Barça fans see Pique as a future club president, a conclusion drawn from the Spaniard’s constant demonstration of leadership throughout his career and the lengths the Barça legend has gone too, to protect the club’s name.

Pique is contracted at Barcelona until 2024 and has expressed his desire to retire at the club. Unfortunately, that desire might come quicker than Spaniard might have hoped for, as this season has indicated that the 34-year-old’s playing career is coming to an end. After a campaign last season where he was so important for Barça defensively, this season has been quite the opposite.

Pique’s season has been ravaged by injuries, and his absence has encouraged the growth of Oscar Mingueza, Ronald Araujo, and even Clement Lenglet in the latter part of the season. When the 34-year-old has been present in the starting XI, his body has let him down on many occasions, a fact that was evident more than ever in the first leg of the Champions League clash with Paris Saint Germain.

For Ronald Koeman, phasing out a player of Pique’s status and importance is quite difficult, as mishandling the situation might not sit well with many fans. Ultimately it is a step that the Dutchman needs to start thinking of, as there are many reasons why the Barça legend could hold Barça back in the upcoming season seen throughout this season.

Many might look at becoming a meme as a good thing, for Gerard Pique, it certainly was not. As Kylian Mbappe sprinted past Pique in Barcelona’s Champions League last 16 clash with Paris Saint Germain, the 34-year-old grabbed hold of the Frenchman’s jersey – a moment that was captured and spread around the world in meme form the following morning. It resulted in nothing as the Frenchman was quick to topple over, but it signalled the beginning of the end.

Pique was hanging onto Mbappe for dear life ? pic.twitter.com/Q6gECEyS9p

Pique has resembled a player of his age this season, and although the 34-year-olds head knows what to do, his body seems to disobey its orders. There is no better example than Barça’s recent games against Valencia, Granada, and most recently Levante, all three of which defended with a low block and tried to transition quickly.

Against Valencia, Pique’s pace — or the lack of it thereof — several times throughout the 90. He often rushed out of position and then was unable to recover after the mistake leaving big spaces behind exposed. Even when the 34-year-old’s positioning is correct, once an attacker can get a run on him, it results in a chance, a flaw Goncalo Guedes brought light to on the 48th minute.

Against Granada and Levante, this was evident again, with Pique also showing a lack of concentration and communication. Although Samuel Umtiti could have done better to inform Pique, it was still the Spaniards man that was available for a free header and shot on the near post, respectively — mistakes that have proved to be costly for the Catalan side in the league.

Pique evidently struggles against teams who transition at pace, a type of team that Barcelona face often. Football has become more physically demanding over recent years, and teams in La Liga still seem to think that veteran ball-playing centre backs can keep up with aggressive fast forwards; an ideology that was ripped to shreds by Chelsea in their recent Champions League clash with Real Madrid.

The 3-5-2 formation has also aided in exposing Pique’s physical flaws, as it is a complex system where everyone needs to do their jobs, especially the midfield. Once the press of the midfield is compromised, the defence is left vulnerable.

Sergio Busquets does not have the pace to cover for Pique when he rushes out to close someone down, and therefore when he makes a mistake, it has a bigger impact on proceedings.

Pique’s body does not seem to be able to keep up with the pace of the game anymore, and it has not only led to mistakes from the centre back but manifestly has resulted in his knee giving out.

Heading into next season, Barcelona will certainly be worried about the constant trouble Gerard Pique is having with his knee. The Spaniard has had a good career in terms of evading injury, but this season knee troubles have caused the World Cup winner to miss 29 games for the Catalan giants.

Pique picked up the first of two knee injuries against Atletico Madrid back in November and ignored the recommended advice of Dr Ramon Cugat to have surgery on the knee to stabilise it. Pique wanted to play a role towards the end of the season, and after three months out, the Spaniard returned to action for the horror show against Paris Saint Germain.

The situation worsened as he picked up the second injury against Sevilla in the Copa del Rey second leg and missed a further 36 days of the season. Having returned for the Copa del Rey final, the Barça legend has struggled in some physically demanding matches of late, as mentioned prior, a concern that Koeman surely has.

Although Pique has shown signs of deterioration this year, the stop/start season he has endured has certainly not helped. The decision to not get surgery seems like a short-sighted one, and only time will tell if it was the correct one. For Ronald Koeman, it would be a worry if he decided to build his defence next season around the World Cup winner and once again, his knee capitulates.

Therefore, Koeman should look to build for the future and go with youth to lead Barcelona’s defence in the coming years.

Planning for next season

The rapid rise of Oscar Mingueza and Ronald Araujo this season has had Barcelona fans salivating at the prospect of the pair developing at the Catalan side over the next few seasons. The pair offer a combination of both talent and youth, and with the club’s financial problems, they have emerged as long-term components for the centre back positions.

Next season it is expected that Ronald Koeman, should he still be there, will revert to a 4-3-3 formation – a more traditional formation associated with Barcelona.

With two centre-back positions up for grabs, it should be the younger pair that are given the responsibility to take Barça back to the top of European football. Both offer pace which complements the high block, both have the strength to deal with big number nines and most importantly, both are good enough at playing out from the back. These are the essentials for Barça’s style of play, the rest, such as positioning and decision making, will continue to develop with more minutes on the pitch.

This transition would see Gerard Pique dropped to the bench and used throughout the season whenever the 34-year-old’s experience is required. The Barça legend is the perfect role model for both young centre-backs, and having the World Cup winner around will aid in improving both player’s games.

Next season might be one of the Pique’s last at the club, as the Spaniard explained to Mundo Deportivo back in 2019: “Intention is to get to 2022, but I don’t have a crystal ball.”

If the Barça legend did, that crystal ball might have shown him the faces of both Mingueza, Araujo, and maybe even Eric Garcia ahead of next season, as Barça need to rebuild, and there is, unfortunately, no time for sentiment. Pique’s body has let him down, and it seems like the right time to make the moves to phase him out.

It is a big move to make, and it must be handled correctly by Ronald Koeman. Pique has previously stated, “If I see that I lose importance or see that I am not at the [required] level, I have no problem leaving earlier.” The Barça legend will not kick up a hissy fit, but the last thing Koeman would want to do is disrespect one of Barcelona’s beloved son.