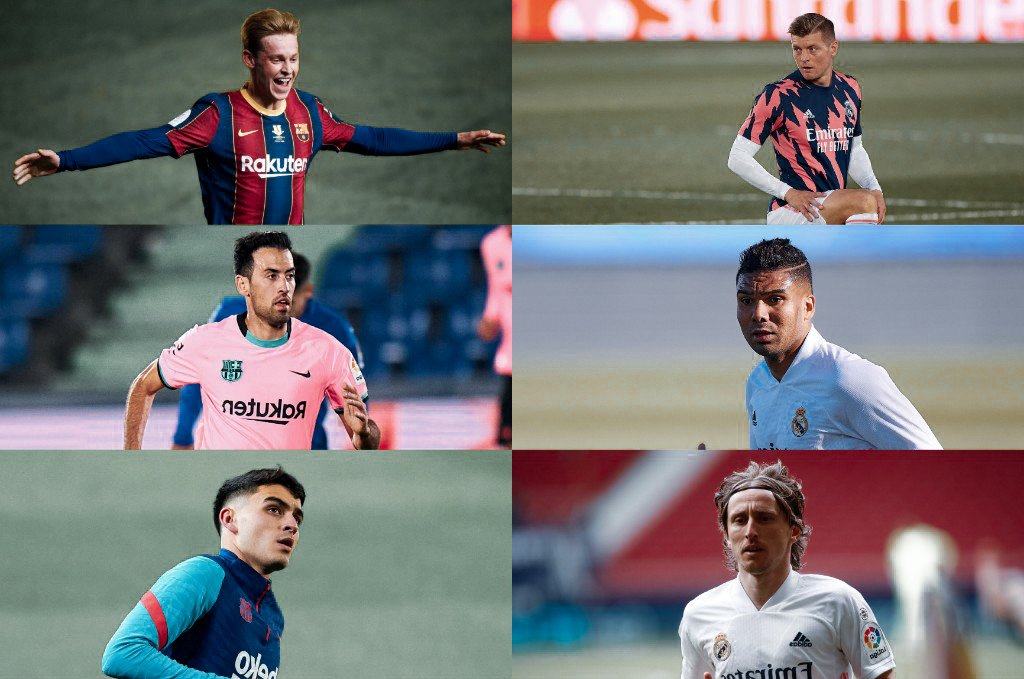 The biggest rivalry in Spain looms upon us once again. Barcelona go head to head against eternal adversaries Real Madrid in a game that could potentially be a title decider. Both Ronald Koeman and Zinedine Zidane have turned around their team’s fortunes since their first clash at the Camp Nou.

The Catalan side is on a 19 game unbeaten streak in La Liga. Simultaneously, the 13-time European Champions have shrugged off their bad form early in the campaign and hold a solid two-goal lead over current Premier League champions Liverpool in the Champions League. Both teams have rapidly narrowed down the gap on initial runaway leaders Atletico Madrid, and the La Liga title looks to be up for grabs.

For all the hype behind the game, there is no doubt that the game will be decided by a few key battles. Lionel Messi going against the Blancos defence or Karim Benzema going against the Blaugranas’ one on the opposite end would be a few that enter your mind, but the biggest of these battles is the one in midfield — one that will decide the fate of the game.

On Tuesday, Real Madrid’s midfield led by Toni Kroos put on a terrific performance, smothering Liverpool’s chance creation completely. They were largely responsible for limiting the Merseyside team to a total of zero shots in the first half and a total of one shot on target altogether. There is no doubt that Koeman would have been looking at the game and trying to come up with ways to stifle the trio that have been the building blocks of Zidane’s Real Madrid.

Combined, Kroos, Luka Modric and Casemiro have racked up a staggering 971 appearances for Los Blancos. It is no surprise, since they bring forth the ideal midfield combination. Kroos is the perfect passing machine and has the ability to control the game from deep. Modric is still going strong at 35 and covers both ends of the pitch. All the dirty work is done by Casemiro, who acts as a shield in front of defence.

In addition to this trio, Madrid also have Federico Valverde, who has the pace and dynamism none of the other three provide. Valverde’s performances for Real Madrid last season earned him a right to compete with Modric for one of the venues in the centre of the park. Injury troubles have halted him on the sidelines lately, though.

Since Zidane retook the managerial reigns, he has relied more and more on his old guard in midfield — and they have responded in kind. There is no doubt that the Blancos‘ midfield is their biggest asset and can outplay anyone on their day.

On the other side, Koeman’s midfield was initially off to a stuttering start. The Dutchman, initially, let loose with a 4-2-3-1, his standard formation with the Netherlands national team. A little before half the season was through, though, he could see the same could not be applied with the Blaugranas.

Koeman was not able to bring the best out of his players in the 4-2-3-1. Philippe Coutinho, after a sharp start, tailed off. Sergio Busquets was often caught out of position, and while de Jong was one of the better players for Barcelona, it was clear that Barcelona lacked someone more direct, creative and consistent in the midfield role. Moreover, none of the midfielders showed an ability to combine efficiently with Messi.

This is where the Barcelona gaffer decided to change things up and give youth a chance. Ever since he has inculcated youngster Pedri into the side, Barcelona have been high flying.

Recently, he has reverted to a 3-4-3/4-3-3 hybrid, with Pedri and Busquets occupying the central midfield roles. Frenkie de Jong starts as a centre-back but steps into midfield when required, as was apparent in the second half against Real Valladolid. The manager trusts the youngster Pedri with the creative job, and he has fulfilled his duties splendidly. Shouldering a huge responsibility, the ex-Las Palmas attacking midfielder has shown maturity beyond his years. He has been likened to Barcelona legend Iniesta often, which reflects not just his talent but his consistency as well.

Pedri’s introduction means the creative duties do not involve de Jong and Busquets as much. The teenager does that job efficiently and therefore they can shoulder other responsibilities. In the earlier 4-3-3, Pedri played higher up the field, while de Jong stayed closer to the pivot Busquets.

Now the Dutchman has shifted to a 3-4-3 of sorts, where de Jong has seemingly taken the role of the central centre-back who steps up as a midfield interior to form a 4-3-3 when required. This change in formations and roles also means youngsters like Ilaix Moriba and Riqui Puig get chances to display their talent, something that was not possible in Koeman’s inital 4-2-3-1. Koeman has sharpened and refined the Barcelona midfield this season and they finally look like a well oiled engine in the Barcelona machine – an engine that could combat against Real Madrid’s – something they were unable to do in the first leg of the Clasico.

Both sets of midfielders are amongst the upper echelons when it comes to creative numbers. First, we look at the passes completed per 90.

These numbers highlight the roles Kroos and Busquets play in their team – controlling the game from deep. Both the German and the Spaniard are experienced heads and have the ability to find the correct pass even under pressure. Moreover, they are accurate as well, with both completing over 90% of their passes regularly in games. The ebb and flow of the game are decided through them – keeping them under control is pivotal to winning games.

Now we look at the shot-creating actions per 90 and the non-penalty xG and xA by both sets of midfielders.

Once again Toni Kroos stands out. He is the set-piece taker for Los Blancos, and is deadly accurate with them. A lot of chances for Madrid come through the German’s set pieces. Moreover, he has the ability to spot a pass from afar, as was visible from Vinicius Jr’s goal against Liverpool. Giving him time on the ball is therefore dangerous.

What is also apparent is youngster Pedri leading from the front when it comes to the creative charge at Barcelona. His link-up play with the Blaugrana forwards, especially Messi, has been pivotal to Barcelona’s unbeaten run in La Liga. He has brought a certain flair and panache that Koeman desperately wanted in the side. Pedri is closely followed by Dutch star de Jong, with experienced head Busquets having little to no role when it comes to direct contributions in the final third.

Moving on, we take a look at the progressive carries per 90 by the midfielders.

Frenkie de Jong stands out here. His ball carrying ability is well known since his Ajax days. More importantly, Koeman knows how to get the best out of the said ability since de Jong has been under his tutelage in the Dutch National team as well. This ball-carrying trait is pivotal to Barcelona building out from the back, as he can make it through the first line of opposition pressure to quickly move the ball forward. Kroos and Modric share the duties for the Los Blancos in this regard, with both possessing the technical ability and the ability to withstand pressure to fulfil this role.

The defensive numbers are dominated by Casemiro, with Pedri and Busquets sharing duties for Barcelona. First, we take a look at successful pressures per 90 by the midfielders.

Pedri comes out on top with Busquets right behind him. He leads Barcelona’s press from the front and is therefore vital to Barcelona winning the ball high up the field. It is this attribute that makes him stand out when compared to someone like Coutinho, who averages a meagre 2.74 successful pressures per 90. Busquets plays an important role as well, winning the ball often in the mid-third rather than the final third. This means when Barcelona’s first press is beaten by the opposition, the Spaniard is there to help win the ball back.

For Real Madrid, these duties are shared by Casemiro and Toni Kroos. While the likes of Pedri try to win the ball high up the pitch, Kroos and Casemiro press more often in the middle third and defensive third. This reflects how Zidane sets Madrid up to press, with the midfielders retreating to help the defenders more often and the forwards leading the press.

Now, we look at tackles and interceptions won per 90 by both sets of midfielders.

Casemiro is the runaway leader in these stats, with 1.92 tackles won per 90 and 1.92 interceptions per 90. It is clear that Casemiro plays as an out and out defensive midfielder, with little to no creative duties. He is the wall Messi and co. have to overcome to reach the Madrid defence. The Brazilian midfielder is immense when it comes to covering up spaces in the defensive third and is one of the major reasons Kroos and Modric can fulfil their duties freely.

Busquets and Pedri share the reigns for the Garnet and Blue once again. While Busquets’ positioning and ability to cover spaces the opposition might exploit is well known, Pedri’s ability as a workhorse is an underrated aspect of his. Pedri’s willingness to run back and defend is one of the reasons Koeman has been able to achieve a well-balanced trio in midfield.

While Real Madrid’s midfield trio has been a major reason for their success, Barcelona’s newly formed trio is right up there along with them this season. This is a must-win game for the Blaugranas and should Koeman fail to snuff out the Blancos midfield trio, his job would become a lot more difficult. The battle in midfield could very well decide who comes out on top, not just in this game but in the standings at the end of the season as well. It could also decide the signings for the two clubs, with both clubs seemingly battling it out for the services of Norwegian wonderkid Erling Braut Haaland. A battle won here may win the whole war – and that is something the Dutch manager, along with Barcelona’s upper management, will have in mind.