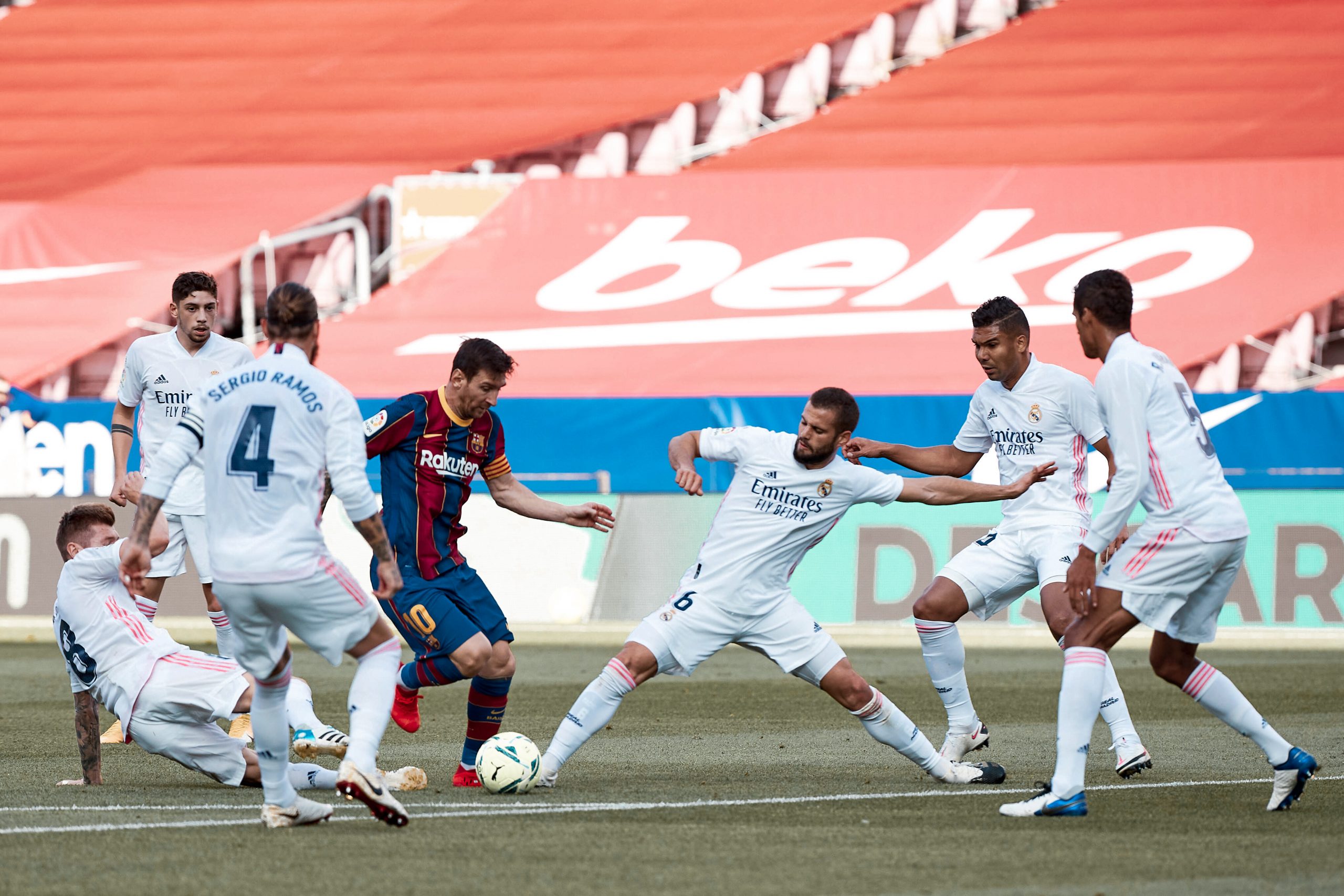 One of football’s grandest matches is set for this Saturday: El Clásico. Some of the biggest names in the sport and most intriguing storylines of the season will come head to head. Real Madrid sit third in the league table, only two points behind Barcelona and three from cross-town rivals Atlético Madrid. Whatever the result, it will have direct consequences on whoever hoists the trophy in May.

The 2020/21 campaign looked grim for both Barça and Real only a few months ago, but both teams have since improved drastically. In the first El Clásico of the season, Madrid made Barça’s poor start to the season even worse, beating the Catalans 3-1 in the Camp Nou. Suffice to say, a lot has changed since then. Join us as Barça Universal takes a closer look at Barça’s biggest rivals.

As mentioned, what started as a poor season has slowly emerged into something much better for Los Blancos. They have been devastated by injuries, they were eliminated in the Copa del Rey by a third-division side, and at one point, winning La Liga seemed completely unrealistic. Their situation was like Barcelona’s: serial winners that looked set for trophyless seasons.

However, Real now find themselves three points off of league-leaders Atlético Madrid, and they just defeated Liverpool 3-1 in the first leg of the Champions League quarter-finals. If there is one thing the defending La Liga champions have shown over the last few years, it’s that they step up when they need to. After a poor December and January, Madrid are undefeated in their last 12, having won ten and drawn twice.

Barça will need to play some of their best football of the season to get a positive result at the Estadio Alfredo di Stefano.

Under Zinedine Zidane, Madrid have been versatile and tactically flexible. Regardless of his style, the trophies speak for themselves. Under his watch, they have won two La Liga titles and were the first and only team in history to win three Champions Leagues in a row. Nevertheless, the team Barça will face on Saturday looks a bit different nowadays.

Injuries have decimated Real all season long, and they will enter El clásico without first-choice centre-backs Sergio Ramos and Raphael Varane and right-back Dani Carvajal. Nonetheless, this was not a problem when they saw off Liverpool 3-1. Zidane typically opts for a 4-3-3 formation but has recently toyed with a 3-5-2, like Barcelona. Given the width of Barça’s play, Zidane could choose to play with wing-backs to counteract Jordi Alba and Sergiño Dest. On the other hand, on Tuesday against Liverpool, he used a 4-3-3.

Like Barça, Real are dominant in possession, typically build-up from the back, and aim to control games by dominating the middle of the park. They play well both vertically or by slowing the game down. In all competitions this season, they average 60.4% possession –for reference, Barcelona average 65%. According to whoscored.com, 42% of their attacks come down the left-hand side, heavily utilizing left-winger Vinicius Jr. and left-back Ferland Mendy.

Defensively, they have the third-best defensive record in the league.

Offensively, this squad has been a shell of itself, failing to score goals ever since Cristiano Ronaldo departed in 2018. Madrid have scored 78 goals across all competitions this season, and an average of 1.76 per La Liga match. On the other hand, Barcelona have scored 101. Los Blancos have scored three goals in a match only nine times this season, compared to Barça’s 17. Furthermore, according to understat.com, they are underperforming their expected goals in the league by five, meaning that they should have, in most respects, scored more goals than they did.

Their leading goalscorer and key player is talisman Karim Benzema – March’s La Liga player of the month – who has 24 goals and six assists this season. Alarmingly, tied as their second-leading goalscorer is center-defensive-midfielder Casemiro, with six.

Real tend to build up from the back, but without Varane and Ramos, they are considerably more fragile at the back. Those two are comfortable on the ball, especially the latter, so their absence has shaken things up at the back for Real. As such, midfielder Toni Kroos often drops deep to pick up the ball. Goalkeeper Thibaut Courtois can also play long balls over the top to Karim Benzema, or left-back Ferland Mendy can carry and progress it forward.

Against Liverpool, Courtois and Kroos often attempted long balls to left-winger Vinicius Jr, looking to capitalize on Liverpool’s high defensive line and pushed-up full-backs. If Barça press with intensity and consistency, they can force Madrid to play it long and win back possession. Nevertheless, if Barça utilize a high line, which they almost always do, they will have to be wary of long balls into the spaces between the wing-backs and centre back.

Other than Benzema up top, the key to Madrid is their midfield. The iconic trio of Casemiro, Luka Modric, and Kroos continue to show why they are one of the best of all time. Although they have dipped in form this season, their recent performance against Liverpool was impressive, as they controlled and dominated the game. Kroos, in particular, tore them apart with his eagle-eyed passing, earning a brilliant assist, causing the second goal with his long ball, making four key passes, and a having 91% completion rate.

Kroos also averages 4.59 shot-creating actions per game and has ten assists, while Modric has ten goal contributions, and as aforementioned, Casemiro is tied for their second-leading goalscorer.

With the ball at their feet, they will have plenty of passing options with Benzema dropping deep, and wingers Asensio and Vinicius Jr. and full-backs Ferland Mendy and Lucas Vazquez making runs. Kroos attempts a staggering 24 long passes (passes more than 30 yards), per game and will surely keep an eye out for any space to exploit.

Against Liverpool, almost all of Real’s goals came from the midfield and forwards capitalizing on individual errors, something Barça have been susceptible to in the past. The Blaugrana will need to be composed and switched on from the get-go. They can not afford a slow or sloppy start, like against Real Valladolid last week.

As a team, Real Madrid are not afraid to play direct and right at their opponents, nor do they hold back when closing opponents down with intensity. They will be particularly lethal on the counter-attack, given the pace of Vinicius Jr. and Marco Asensio. Madrid will also look for crosses into the box to Benzema or Casemiro, who makes devastating runs into the box.

Supporting runs and overlaps will come from full-backs Ferland Mendy and Lucas Vazquez. This attack-minded duo combine for, according to understat.com, almost three key passes a game. Mendy is also the team’s fourth-most targeted player with passes and plays a key role when building up from the back or in the final third. He will often make overlapping runs past Vinicius Jr or wreak havoc more centrally.

Left-winger Vinicius Jr. attempts 6.57 dribbles per game at a clip of 51.5% and often looks to use his speed and flair to get past opponents. The Brazillian had an impressive game against Liverpool, scoring a brace. Dest notably played very well against him in the first el clásico in November, and hopefully, he can do it again. Furthermore, Barça have played against some lethal quick players in recent months, such as Kylian Mbappe, and they should learn from those lessons.

While the wingers are dangerous, Karim Benzema is still the biggest threat. After all, he has more goals than the next four leading-goalscorers combined. The Frenchman has carried Real’s attack for the last few seasons and is in mighty form over the last few games, scoring in each of his last six league appearances and scoring nine goals in his last seven appearances. Below is a visual representation of Benzema’s shots (blue) and goals (green) in La Liga this season. Evidently, he is a threat from all over and must be tightly marked.

How can Barça beat them?

Although Liverpool struggled to create chances against Madrid’s makeshift backline, their defence is noticeably weaker without Ramos and Varane, and Barça should test them with all they have. With their full-backs pushed high, Alba and Dest can maraud down the wings, and Dembele can find space to run onto. Lionel Messi should also be able to pick out passes in and behind their backline, but the key for Barça will ultimately be their midfield. If Frenkie De Jong, Sergio Busquets, and Pedri can dictate the tempo and keep Madrid’s midfield trio on their heels, they can walk away with a meaningful result.

While Vinicius Jr. and Asensio aren’t exactly prolific goalscorers, they can find spaces in between Barcelona’s wing-backs and centre-backs. On the other hand, the three-man backline should help with covering. Furthermore, that should help Barcelona contain Benzema, but with his constant movement, he will be hard to close down.

For inspiration, Barcelona can look to their performance against PSG in the second leg, where they quickly closed down their opponents, dominated the midfield battle and controlled tempo. Whoever wins the battle in the middle of the park could very well win the game.

Both teams are in incredible form over the last few weeks, but as shown in the past, form does not matter coming into a Clásico – all bets are off and anything can happen. Quite often, the results come down to individual brilliance, and Barça have plenty of tricks up their sleeve.

Despite injury struggles, Real have a knack for finding ways to win, but there are holes in their squad that Barcelona can exploit. On the other hand, the Catalans are not invincible either and will need to play one of their best games of the season. Their defence that has been susceptible to careless mistakes and lapses of concentration must sharpen up, just as their attack that has squandered many chances must be lethal.