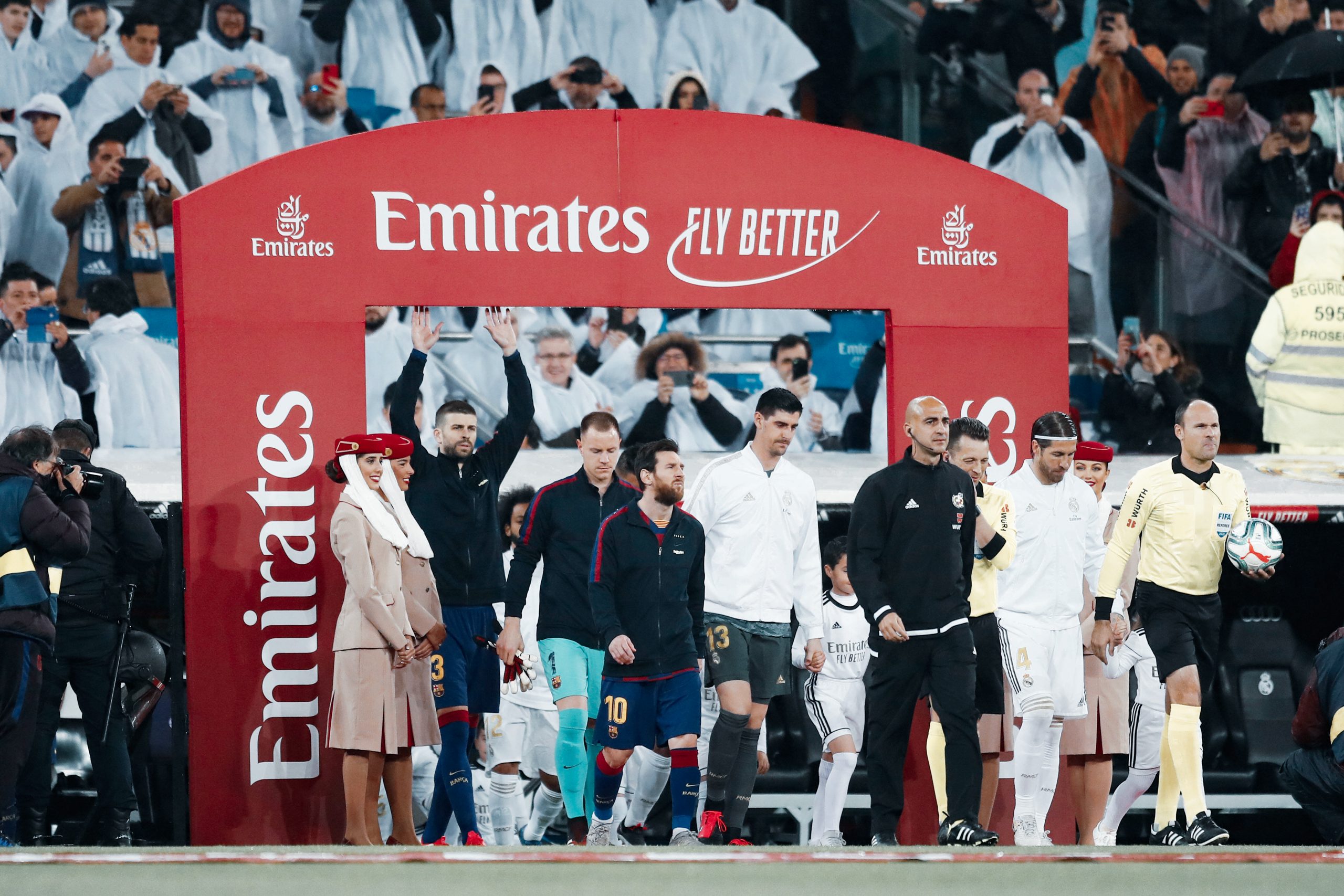 Saturday is a day that fans of both Barcelona and Real Madrid always circle in their calendars upon the release of the La Liga fixtures. El Clasico is not only the biggest club match in world football but also an indicator of how the La Liga title race will conclude, specifically the second tie of the season.

This season the pair have been joined by Atletico Madrid in the title race, but having let a massive lead slip, the momentum is with Barça and Madrid at present, which ramps up the importance of this weekend’s game at Valdebebas.

Barça are currently 19 games unbeaten in La Liga heading into the tie and have taken an impressive 51 points out of the last 57 available.

Real Madrid are also in fantastic form heading into El Clasico, remaining unbeaten in their last 12 games in all competitions and are coming off the back of a dominant 3-1 victory over current Premier League champions Liverpool in the Champions League.

The first Clasico of the season at the Camp Nou back in October was won by Real Madrid, with Los Blancos producing an impressive display in a 3-1 victory over the Catalan side. However, that Barça team are a shadow of the one Ronald Koeman has developed ever since, and Koeman’s men will be regarded as the favourites for the second clash of the season.

This weekend could go a long way in deciding who will lift the La Liga trophy this season, with first-place Atleti facing a tough opponent in Real Betis and El Clasico means one of the two chasing teams will drop points.

With that being said, here are 3 key battles that could decide the outcome of Saturday’s vital Clasico.

Three years ago, the departure of Cristiano Ronaldo left Real Madrid with a big hole in the role of the club’s main scorer. Over the years, Florentino Perez has tried to fill this with players such as Eden Hazard and Vinícius Júnior, but it has been Karim Benzema who has taken on the role with great effect.

This season has been no different, with the Frenchman producing 24 goals and 6 assists in 34 appearances for Los Blancos.

Benzema has been in great form of late heading into the Clasico, scoring 9 goals in his last 9 league games. Not only is the Frenchman a goal-scoring threat, but his ability also to drop between the lines to create chances for his teammates makes the 33-year-old a handful for any defender.

For Barcelona, with Frenkie de Jong moving back into midfield, it should be expected that Benzema will take up positions between Ronald Araujo and Clement Lenglet, with Benzema most likely targeting his fellow Frenchman due to his tendency to make mistakes, such as fouling Sergio Ramos for a penalty in the reverse fixture.

Ever since his mistake against Cadiz, which led to Barcelona dropping two points, Lenglet has been in adequate form for Barça and was fantastic in the Catalan side’s most recent game against Real Valladolid. The Frenchman won seven aerial duels, made two successful tackles, and had a pass completion rate of 83% against Sergio’s men.

The Valladolid game turned out to be perfect preparation for this weekend’s Clasico for Lenglet, as they offered a big threat in counterattack situations, a trait that is associated with Zinedine Zidane’s side in big games.

Although Karim Benzema is a much better player than the likes of Kenan Kodro, this performance would no doubt have encouraged Barça fans and if Lenglet can keep Benzema quiet, it would go a long way in helping the Catalan side secure three invaluable points.

Real Madrid’s last match against Liverpool offered a glimpse of what can be expected in the Clasico this weekend with regards to the midfield battle. Real Madrid’s midfield three are masters of the game, and if allowed, the time and room to operate can control the tempo, pace and ultimately the result of a match. Liverpool gave them both the time and room to dictate the match and were dominated as a result.

With that in mind, Frenkie de Jong and Toni Kroos have huge roles to play, and both could be deciding factors in the match.

Kroos was excellent in this fixture last season. The World Cup winner pulled all the strings in Real’s midfield and controlled the tempo of the game. The German also assisted the winning goal for Vinícius Júnior in a 2-0 win for Los Blanco’s.

In addition to this, Kroos was brilliant at the Camp Nou in the reverse fixture and had a big impact on how that game played out.

Kroos has been in good form in recent weeks in both La Liga and the Champions League. The German began to noticeable slow down towards the end of Tuesday’s game against Liverpool, which could be a benefit to Barcelona, as the Clasico is sandwiched between both of Madrid’s Champions League ties.

De Jong will be required to take time away from Kroos through pressure and aggression. As everybody knows, the less time the German has on the ball, the less likely he is to have an impact.

Apart from stopping Kroos, De Jong has a vital role in an attacking sense. The Dutchman made an observable difference when moved into midfield against Real Valladolid, and Barça immediately looked more of a threat. De Jong will be required to make forward runs to break Madrid’s lines and move players out of position. Dragging the likes of Casemiro out of position frees up Lionel Messi,, and scenarios like this are game-winning.

De Jong has arguable the most important job on Saturday night; stopping Kroos is not an easy task, and if the Dutchman can find the right balance between accomplishing that and attacking, the midfield will be Barça’s.

Going into this weekend’s Clasico one thing is certain, Lionel Messi is due a goal. The Argentine has not scored against Real Madrid since May 2018 and was so close to ending this draught in the reverse fixture in October.

The Clasico’s all-time leading goal scorer has been back to his magnificent best since the turn of the year and until Real Valladolid, the Argentine went on a run of 14 games of producing either a goal or an assist. If this form continues it will be a huge problem for Zinedine Zidane to figure out.

Since Messi drops back into the midfield, the man who will be tasked with stopping the six-time Ballon D’or winner will be Casemiro.

The Brazilian midfielder was excellent in Real’s win over Liverpool on Tuesday, and this was an extension of his recent form. The 29-year-old is at the heart of Zidane’s midfield and offers the Madrid defence a lot of protection through his position, tackling and interceptions.

Casemiro has also been a goal threat this season and is among the top goal scorers for Los Blanco’s. He often pops up in the box to take care of set pieces, and this is something Barcelona need to be prepared for.

Lionel Messi has always been the difference-maker for Barça, but will not be here forever. This could very well be his last chance to score in an El Clasico. Managers have prepared for him in different ways, some being successful and others not so much. Zidane and Casemiro will have to figure out one of the worlds most difficult puzzles on Saturday night, and the only thing to say to them is good luck.