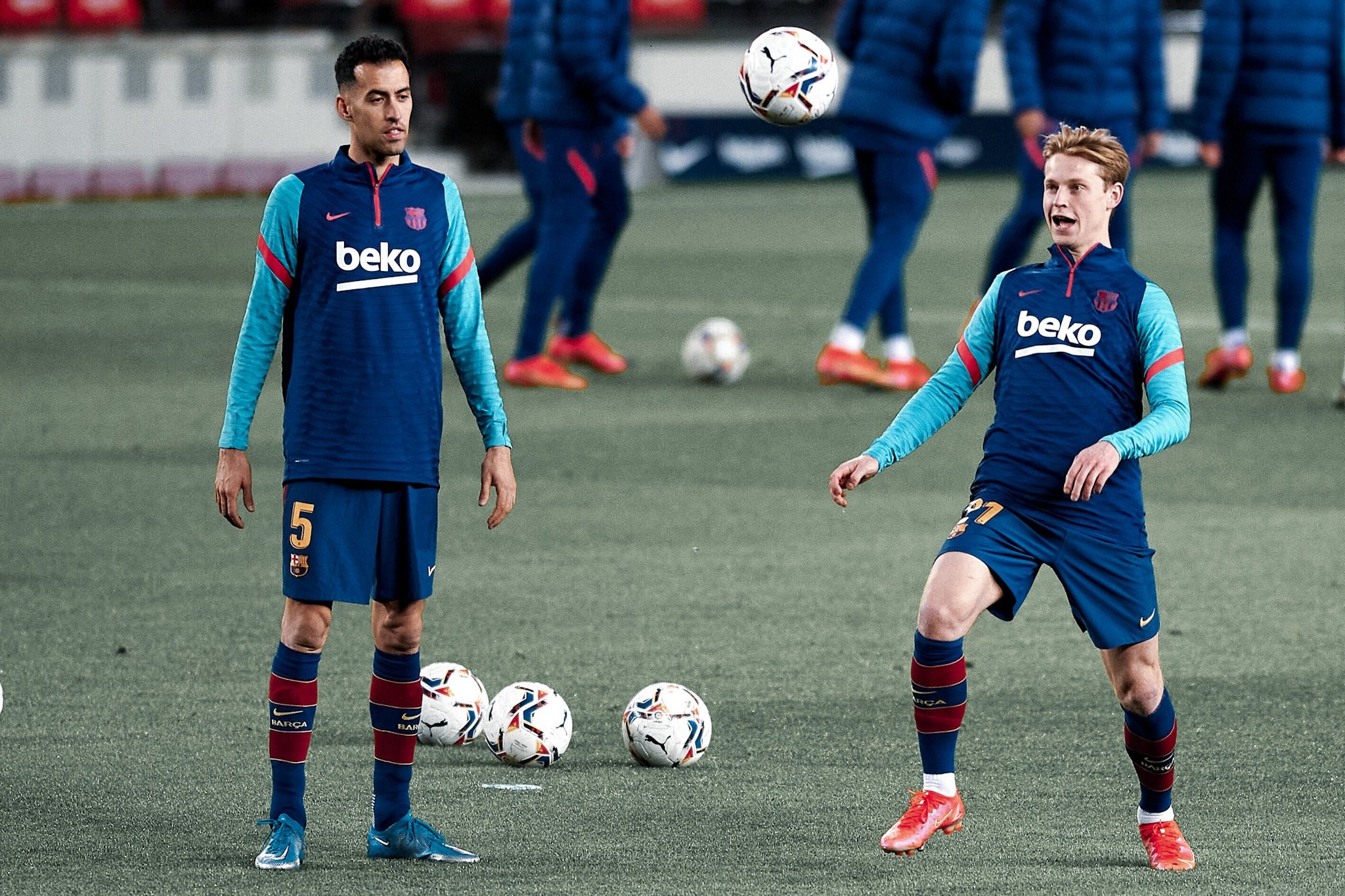 As Barcelona ready themselves to take on Real Madrid in the Estadio Alfredo Di Stefano, join Barca Universal as we take you through the preview of the tie.

The last time Fútbol Club Barcelona and Real Madrid faced off, Ronald Koeman’s side by and large the inferior side, as a Sergio Ramos-inspired outfit earned the Spanish champions their bragging rights in the biggest match in the world. The Catalans felt as though the confidence that had been brewing towards the end of the opening hour of football would translate into a goal, but just as they got control of the tie, a careless mistake by Clément Lenglet shifted the tides firmly in Los Merengues’ favor, and they took full advantage of it.

Heading into Saturday night’s game, both sides find themselves in almost identical form, and identical goals. In La Liga Santander, Barcelona are on the back of a 19 game unbeaten run, stretching all the way back to early December when they lost to Cádiz CF away from home. Ever since the turn of the year, the Blaugrana have won 13 of their subsequent fourteen matches. On the road, the Garnet and Blue have been uncharacteristically strong, embarking on a run of nine away victories on the trot, one which Catalans will be desperate to transform into double digits in this almost title-deciding tie.

Since January, Barça have without a shadow of a doubt been La Liga’s best side, only rivaled by their Madrid counterparts. With 40 points from a possible 42, they have the highest points per game ratio. During this time the former champions scored a whopping 39 goals, conceding just nine in the process. In said period, their average scoreline has been 2.8-0.6, a notch better than the 1.9-1 they averaged until the turn of the year.

Breathing down Barça’s necks at third on the table, and just three points away from pole position, Los Blancos will be in desperate need of a victory to keep their title challenge alive. Much like last season, this championship six-pointer will have massive repercussions on the rest of their campaign. A win opens up an avenue for them to win the last eight games in the home stretch of the season — much like last year —, while a loss could open up an unprecedented five-point gap between themselves and the Culés, a prospect Zinedine Zidane would be the last to think about.

In a zone of jaded familiarity in the top 3 of the La Liga table, the current Real Madrid outfit is rather similar to that which won La Liga a year prior. Taking inspiration from their remarkable victory over Atlético de Madrid on Tuesday night, Los Blancos will look to replicate much of what made them great then, as well as in their recent Champions League Round of 16 tie against Atalanta in the this edition of El Clásico.

Anything but a team to back down from a challenge, Zinedine Zidane’s men have overcome almost all objectively tough opposition they’ve faced. They ooze confidence, full to the brim with conviction given their record of invincibility against the rest of the top 6 teams in the Spanish top-flight — a record only they can boast having.

Los Merengues are easily one of La Liga’s best teams, with world-class players strewn all through the squad. Karim Benzema leads the front line not only in his goals but also in his grandiose personality and undoubted quality in the final third. The two artists in midfield, Toni Kroos, and Luka Modrić are certainly going to feature in the tie, as their symbiotic relationship coupled with their ability to weave their way through defences with their passing will never go unnoticed. In goal, they have the ever imposing figure of Thibaut Courtois to protect their goal should the backline — now bereft of either Captain Sergio Ramos or Raphaël Varane — falter.

When it comes to the champions, one should expect nothing but the best, but this season Madrid have had their fair share of ups and downs. Either due to a lack of communication, poor team selection, injuries, and everything in between, Los Blancos have seen their numbers waver widely throughout the season. Either way, Zidane’s men have an uncanny ability to pull through, regardless of situation, making the most out of otherwise bleak and disparaging situations, especially when no one believes them to.

The Ballon D’or winning manager’s team may well shape up in a 4-3-3 or a 3-5-2 setup, perhaps to mirror that of Barça. Thanks to their positional fluidity and sheer dexterity, Madrid can easily rely on the likes of Vinicius Junior and Marco Asensio to provide width as well as depth in attack, which they will surely use to capitalize on the Catalans’ defence. Possession is by no means an issue for the home side, as with the likes of Carlos Casemiro, Kroos, and golden ball winner Modric, they can run circles around any defence.

This is a game that will be either won or lost in the midfield.

Ronald Koeman’s outfit endured possibly their worst 90 minutes to a match this season against Sergio Soriano’s Real Valladolid. They were able to keep possession for large portions of the game, but without a recognizable team shape or tactics to base themselves off, Barcelona had an abundance of meaningless possession. To their credit, performances such as these are one-off incidences, as for the most part, particularly this calendar year, the Blaugrana have been a force to reckon with.

The Garnet and Blue are anticipated to keep much of the same starting eleven that faced Los Pucelanos in the weekend.

Koeman will most probably keep the same setup as before, this coming in the 3-5-2 / 3-4-3 hybrid. Ronald Araújo is expected to make a return to the starting eleven, though who he will return for is the point of controversy. Frenkie de Jong has been sensational in his role as a libero, and given the needs to operate with a technically astute ball-playing centre back such as Oscar Mingueza, it might be a conundrum for the Dutch manager to pick his backline.

The midfield, now defined, with a coherent system and players who in every conceivable way gel together in the system, need not be rotated. In attack, Koeman has another issue up his sleeve. Will he still go with Antoine Griezmann in his attacking trident, or will the Frenchman be dropped such that Frenkie de Jong can then okay higher up? That remains to be seen.

In terms of the playing style, Barça have the moral obligation to play with the same ferveur as they did against Sevilla and Real Sociedad. The asphyxiating press, fine-tuned passing as well as the player’s impeccable positioning made for three mouthwatering ties against stern opposition. Should they replicate the same here, there is no reason not to expect a Catalan victory right at the heart of Spain.

Magician, architect, and everything in between, Toni Kroos is the heartbeat of this Madrid team, and for his differential skill, he is easily one of — if not — La Liga’s best in his position. He is teeming with skill on the ball unparalleled to that of almost anyone in Europe’s top five leagues and is more than ready to put up another exhibition performance, this time against an old rival in Barcelona.

Mitigating the insane skill of this German machine will be anything but easy, as it is significantly easier to plan his downfall than it is to execute it. Barça’s back three make it such that any piercing long or through ball from in deep can cause massive trouble, and with Kroos at the heart of moves, much like against the Scousers in midweek, they better be wary.

– Barcelona are on a run of 19 games without defeat in La Liga.

– Barcelona are winless against Real Madrid in their last 3 games in a row.

– Real Madrid is unbeaten against any of the top 6 in La Liga.

– Barcelona have lost two Clásicos in a row.

Given Barcelona’s performances in recent weeks, especially against tougher opposition, while this tie will not necessarily be a walkover, the Catalans have the potential to turn this into a thrashing. The Garnet and Blue need a victory of at least three goals to one, owing to the heavy Clásico defeat earlier in the campaign, which means that a reverse of the previous scoreline is the least the team should aim for.