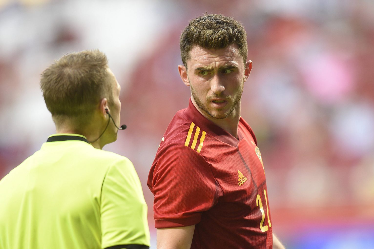 Individually, at several levels, Gerard Pique, Marc-Andre ter Stegen, and Clement Lenglet enjoyed pretty good seasons in the 2019/20 campaign, even though the game against Bayern Munich will tell you otherwise. Owing to the same, nobody could have predicted how poorly the three would plummet this season. Even with the rise of Oscar Mingueza and Ronald Araujo, Barça have been troubled by their defence one too many times this season, but their fortunes could soon change.

The cover of SPORT is indicative of the same, featuring Frenchman turned Spaniard Aymeric Laporte, titled “Operation Laporte”. It was reported by The Athletic that Manchester City host several dissatisfied players in their squad, including Laporte. The 27-year-old lost his starting spot to John Stones in the last season, who partnered Ruben Dias to the UEFA Champions League final.

That said, it is well-documented that he is a world-class defender and City will not let go of him for cheap. Pep Guardiola is said to be interested in the services of Sergi Roberto and a swap + cash deal could take place if the two parties reach an agreement on either player. The Spaniard’s season was injected with injuries, controversies, and mediocre performances. It has now gone bad to worse after he was caught partying in Greece without following social distancing norms.

Barcelona currently host a swarm of central defenders in the form of Pique, Lenglet, Araujo, Mingueza, Samuel Umtiti, Jean-Claire Todibo, and the newly-signed Eric Garcia. Todibo’s move to OGC Nice is all but official at this point with the French club very interested in the youngster’s services. Meanwhile, Umtiti’s agents have been asked to look for a new club, according to reports, with his future at Barça bleak. Lenglet could leave as well if a suitable offer arrives, despite him publicly saying that he will stay.