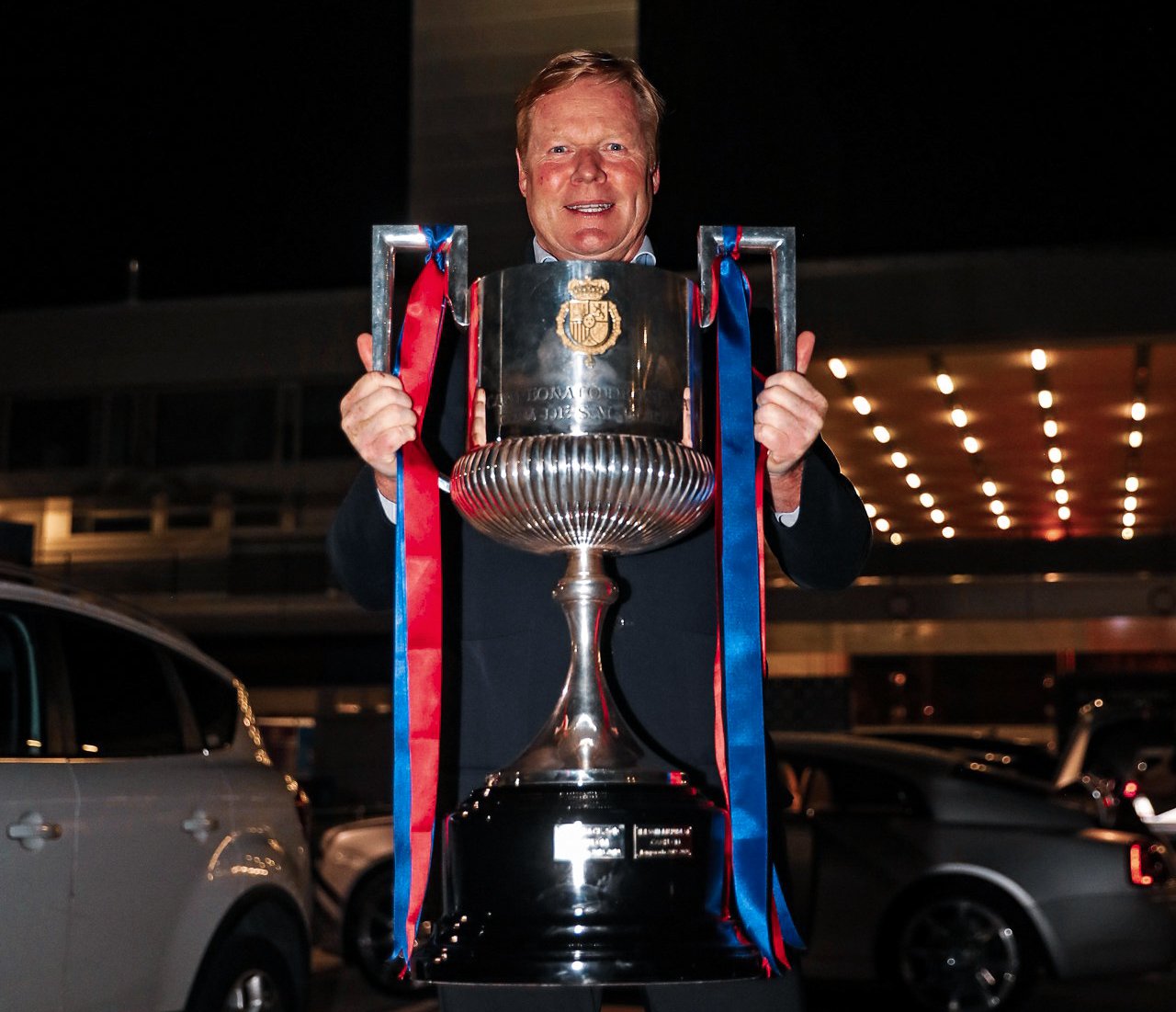 “We know him well: what he is like, how he thinks and how his teams play. But also, for his experience, because he was in Johan Cruyff’s Dream Team, because of his way of understanding football. He knows our philosophy, our way of playing.”

Former Barcelona president, Josep Maria Bartomeu’s reign, was undoubtedly a train wreck. The Spaniard forgot the essence of FC Barcelona and forgot on one too many occasions about that “philosophy” when making any decisions on behalf of the club. One decision the former president seems to have got right was appointing Ronald Koeman, a man who certainly embodies the philosophy of the club and the ways of his former manager Johan Cruyff.

Koeman has admirably answered his critics this season, and the Dutchman’s team has become one who shares the same winning mentality that drove his legendary playing career.

Although most might not have known it, Koeman’s mentality was evident from the get-go, as the job he had just accepted was always going to be an uphill battle, and even if the Barça legend won that battle, it still might not be enough.

It is not underselling it to state that Koeman joined one of Spain’s biggest circuses last summer. Barcelona was a mess; from the financial side to the sporting side, the dressing room was broken, and everyone was up for sale except for a group labelled the unsellables.’ Koeman knew this and still took the job.

He was determined to prove himself a success story and motivated to show the incoming president that he was the right man to lead the new era. The Barça manager knew that to be successful, the mentality of his players would have to change. With that in mind, there is only one place to start.

To top their Champions League group, Barcelona would not have to beat Juventus, they did not even have to draw, they could lose but not by a scoreline that exceeded the 2-0 win the Catalan side had in Turin earlier in the competition. They lost 3-0.

The odds were heavily stacked in their favour, and they still failed. This was the level of confidence Koeman had to work with at the start of the season; this was the mentality the Dutchman needed to fix.

The weekend before, Barça had lost 2-1 to newly-promoted Cadiz, leaving the Catalan side 12 points behind leaders Atletico Madrid and sitting back in a bleak 7th place. Things were not looking good for Koeman and his men, but the defeat in the Juventus game seemed to spark something. A spark that would ultimately change the course of Barca’s season.

In the 30 games that followed Juve, Barcelona lost only four: the Supercopa final, Paris Saint Germain, the first leg of the Copa del Rey semi-final to Sevilla and El Clasico.

In this timeframe, the players’ trust in Koeman evolved as they compiled a 19-game unbeaten run in the league. The team became more settled and adapted easily to Koeman’s rotation of formations and, more importantly, had faith in the change of structure. The youth was getting a chance and excelling, the fringe players had faith in Koeman to use them properly, and the experienced players started to return to their former selves.

All this led to Koeman’s biggest change, instilling his winning mentality into the players.

The run of 19-games unbeaten symbolised the job Koeman had done. Barcelona were 14 points behind Atletico Madrid had one stage in the season and now the 26 time champions sit at a point adrift, with their destiny in their own hands. While their streak in the league is largely influence by Atletico Madrid’s failings, Barcelona kept pushing on under pressure to come this close, something nobody expected. The motivation to keep going comes from the manager and nothing showed this better than the Catalan sides Copa del Rey campaign.

“As a coach, I can’t ask for more than what I’ve seen tonight. We have changed our mentality.”

As Lionel Messi lifted the Copa del Rey high in the stands of the Estadio de la Cartuja on Saturday, the world would not have been able to look past the sublime performance from the six-time Ballon D’or winner, Frenkie de Jong’s genius, and the undying relentlessness of the Barcelona team. They impressively ripped through Athletic Club in a fashion that was almost destined.

Barça’s mentality through the rest of the campaign implied that they could not fall at the final hurdle and the win against Bilbao was inevitable. The El Clasico defeat posed a threat to this, but it now just makes it more impressive, considering the past implications of defeat in this fixture.

Although the two previous rounds were not straightforward, the destiny chapter of this story started in the quarter-finals against Granada. As the clock moved into the 88th minute, Barcelona found themselves 2-0 down to Diego Martínez’s men.

Antoine Griezmann, Barcelona’s protagonist in the cup, would get the comeback underway after sneaking a Messi cross in at the front post before Jordi Alba headed home a 92nd-minute equaliser to send the tie into extra time.

In extra time, Griezmann struck again to make it 3-2. The comeback was complete. This is Barcelona, however, and even after a dramatic comeback, the Blaugranas still found a way to make it hard for themselves as they gave away a penalty that led to the game being tied at 3-3. Goals from Frenkie de Jong and Alba allowed Barca to progress, and this match proved to be a key moment for Ronald Koeman’s team.

For the Dutchman, the result was important, but the mentality shown by his players eclipsed that, as this was the first real sign of Barca showing it and this could be used to take the team forward.

Barcelona did take this forward and applied the trait in the next round. After a poor performance, they would taste defeat in the first leg of the semi-finals losing 2-0 to Sevilla at the Ramon Sanchez-Pizjuan. Without an away goal, Koeman’s team would have a mountain to climb.

Under the lights of the Camp Nou, Koeman would experience his “best night as Barça’s manager”, as the fruits of his labour were expressed in his Barcelona team, as they exemplified the winning mentality the Dutchman had been trying to instil all season.

The big moment in the tie can be found in the 73rd minute. Barcelona were already 1-0 up after an Ousmane Dembélé rocket in the first half, but now Lucas Ocampos was staring into the eyes of Marc-André ter Stegen, ready to slot home a penalty to kill the tie. The Argentine had his penalty saved by the German, a game-changer that would ultimately send the Catalan side through.

On the 94th minute, the moment came. The moment Gerard Pique headed in the equaliser to level the tie, the moment Barcelona’s destiny won them the Copa del Rey.

Barcelona would secure their spot in the final in extra time thanks to Martin Braithwaite, but for Koeman, it was a peak moment, as the Barça legend realised that his mentality was now being personified in each of his players.

“Ronald Koeman has been clear with his ideas from the beginning. We never doubted him,” Jordi Alba said after the match. Music to Ronald Koeman’s ears, a testimony to a job well done, and to a bright future for Barcelona under his leadership.