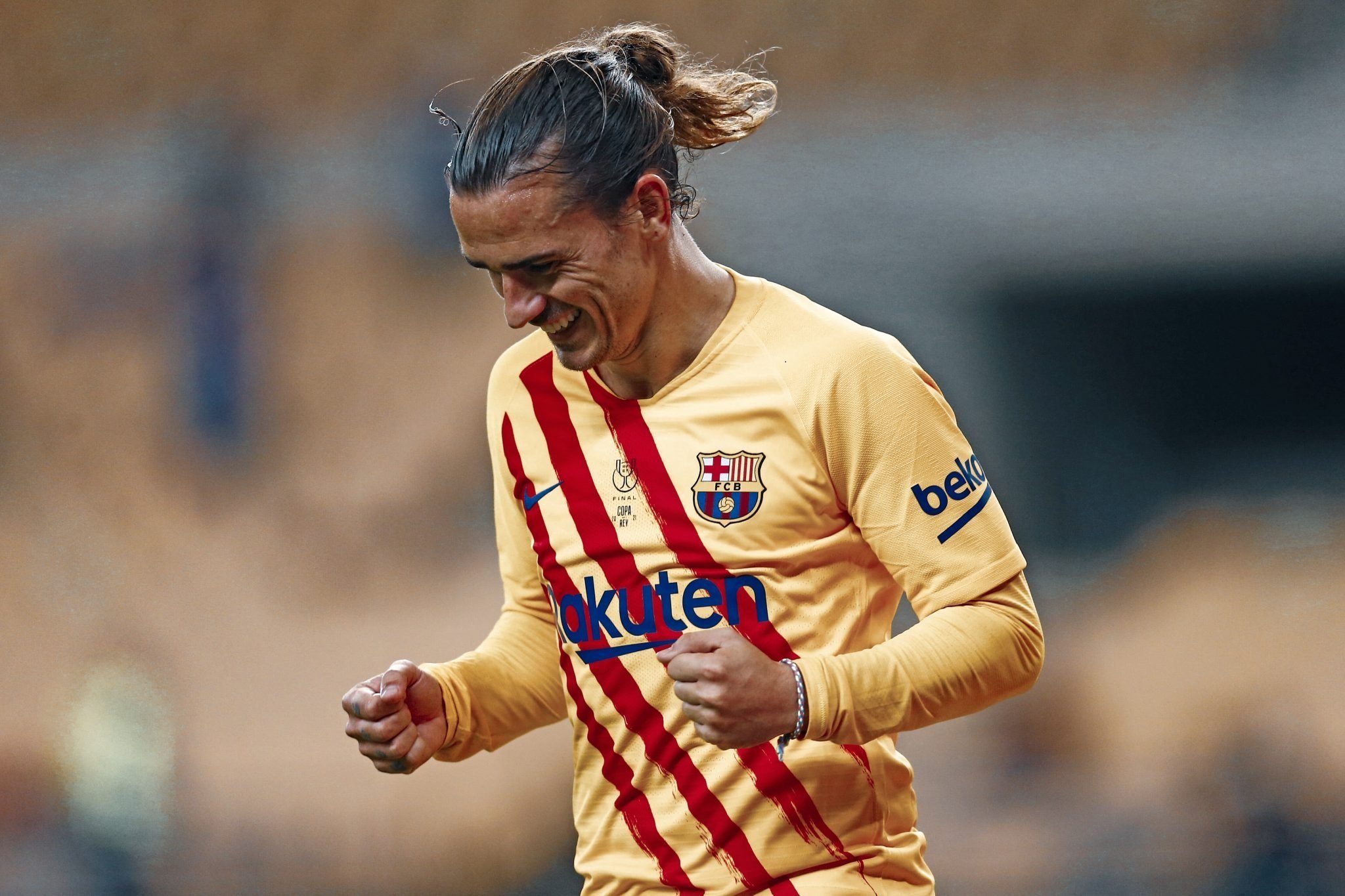 Barcelona’s 4-0 against Athletic Bilbao in the Copa del Rey final earned them their first trophy in over 700 days, finally putting an end to an uncharacteristic trophy drought. Their 20/21 cup run was nothing short of sensational, playing in three extra times and overturning plenty of deficits, leaving Culés on the edge of their seats more often than not.

Throughout the tournament, Ronald Koeman fielded 23 players, and there were seven different goal-scorers, but perhaps most instrumental of all was Antoine Griezmann. The Frenchman was a force to be reckoned with, tallying three goals and four assists in six appearances and spearheading various comebacks. In many ways, it was his “Magnum Opus” with Barcelona, a term used to describe an artists’ crowning achievement.

After a rough first season with the Blaugrana, Griezmann has reached new heights in 20/21. Despite still making five less appearances, he has already equalled last season’s goal tally (15) and has eleven assists compared to four. He has fit more into the team system, although there are still many times that he looks out of place.

Nonetheless, he stepped up when the team needed him most in the Copa del Rey, earning him his first trophy with Barça. He has not started various big games this season, particularly the recent El Clasico, but his Copa performances have shown Koeman that he has plenty to offer.

Barcelona’s first-round matchup was against third-division side UD Cornellà, and Griezmann played 101 minutes in that match, but it was not his best night. After that, he got more and more integral with each round.

After dispatching 2-0 Cornellà in extra time, Barça travelled to play Rayo Vallecano in the Round of 16 on January 27. Koeman opted for a 4-3-3, which was working well for the team at the time, and Griezmann played at left-wing, although as always, he had the freedom to roam from this position.

The match was hard-fought, with Vallecano opening the scoring in the 62nd minute. Barça had chance after chance prior to that, but they could not convert. This included two penalty appeals and hitting the crossbar in the 19th, 34th, and 47th minute.

In the 68th minute, Griezmann broke through the last line of the defence, following a through ball from Frenkie De Jong. One-on-one with the keeper, he unselfishly set up Lionel Messi for an easy finish. For Barça’s winning goal, his movement was integral in giving Jordi Alba space to cross to de Jong by occupying two defenders, who finalized the comeback.

Throughout the match, Griezmann was tireless as ever with his work rate and pressing, he was an expert with his passing and movement, and his confidence was slowly but surely building.

In the quarter-finals, Barcelona faced off against Granada, who were a tough-out. In the 5-3 win, Griezmann put on what might have been his best performance in a Barcelona jersey.

Just like against Vallecano, the Catalans had plenty of goal opportunities, but nothing came to fruition. Unfortunately, things got off to a rough start for the Frenchman. Outside his own box, he passed to Samuel Umtiti in a dangerous area, and the latter gave up possession, letting Vallecano score an early goal. He also played a part in the second goal, as he gave the ball away, which allowed for a quick counter-attack. Down 2-0, things were looking grim.

But, with only ten minutes left, Barça attacked with all their might and showed fighting spirit like never before. Griezmann had a bicycle kick that was expertly saved, while Francisco Trincão and Ousmane Dembele hit the crossbar.

In the 87th minute, they finally had a breakthrough. Messi passed a signature ball into the box, and Griezmann got on the end of it, narrowly scoring past the keeper. In stoppage time, Messi sent an identical ball to Griezmann. This time, the Frenchman headed it across to Jordi Alba, who equalized for the Blaugrana. Because of his goal and assist, Barça’s title hopes were alive.

With extra time came 30 minutes to advance to the semi-finals. In the 99th minute, Alba sent a cross into the box, and Griezmann headed it home, putting the team up 3-2.

Barça consequently gave up a penalty (3-3), but de Jong later scored to give them the lead again (4-3). In the 112th minute, Griezmann curled a slick one-touch pass to Alba, who rocketed it into the back of the net. Barcelona won 5-3 after being down 2-0 with only ten minutes remaining.

Throughout the game, Griezmann stepped up when the team needed a goal most. He gave them a lifeline in the 87th minute with his goal; he assisted the equalizer to Alba; he put them ahead 3-2 with his header, and he finished off the match with another assist. It was a brilliant team performance, but Griezmann had his fingerprints all over it, contributing to four out of the five goals.

On February 10, Barcelona played Sevilla in the first leg of the semi-finals. In all, it was an unlucky night as the Catalans lost 2-0. That started a run of one win in four matches, including the 4-1 defeat to Paris-Saint Germain. With the Champions League and La Liga seemingly out of reach, the Copa del Rey remained their only chance for silverware.

Suffice to say, the match against Sevilla was highly anticipated. Koeman went with the 3-5-2 that had beaten Sevilla 2-0 in league play one week prior. Griezmann started the match on the bench, but he would come on later and play a pivotal role.

In the 12th minute, Dembele scored Barça’s first goal. In search of the tie-equalizer, Griezmann came on in the 63rd minute for Dest.

With less than a minute left, Barcelona were still down 1-2 on aggregate and desperately needed a goal. In literally the last move of the game, Messi took a corner, but it was headed out of the box. Griezmann ran and tracked the ball down outside the box, faked a cross with his right before shuffling the ball inward. With the ball on his favoured left foot, he put in a textbook cross. Gerard Piqué rose up and headed it into the back of the net, equalling the scoreline and setting up yet another extra time.

Barça went on to win the game 3-0 and make it to the final, all thanks to Griezmann’s clutch assist.

Prior to the cup final, the Frenchman found himself out of the picture at Barcelona. He didn’t start El Clasico, but when he came on, he proved his worth and was excellent despite the final result. That was enough to earn him a start in the cup final alongside Messi in a 3-5-2, a decision from Koeman that was heralded by fans before kickoff.

As has been the case with many other games this season, the Catalans could not break their opponents down. They had countless opportunities but could not finish. Early in the second half, Griezmann was on the receiving end of a cross from Sergiño Dest but Bilbao keeper Unai Simon somehow kept it out.

The floodgates eventually (and deservedly) opened in the 59th minute as de Jong sent a low cross into the box for Griezmann, who cooly slotted it home. The goal broke down Bilbao as Barça went on to score four times in 12 minutes.

In the 70th minute, Griezmann had a quick one-two with Alba that sent the marauding full-back down the line. His cross found Messi on the edge of the box, who made it 4-0. In the 85th minute, Griezmann was only nearly offside as he scored a fantastic goal rounding off the keeper, but it was ultimately ruled offside.

His showing against Bilbao was the perfect capstone for a brilliant run, being an integral piece in helping Barcelona win their record 27th title.

This season’s Copa del Rey has been Griezmann’s magnum opus for Barcelona. He has always offered an immense work rate and high effort, but his run in the cup reminded Barcelona why they bought him: for his goals and assists in high-leverage situations.

His confidence is surely at an all-time high since he arrived in 2019, and that can only serve the team well as they search for the La Liga title.