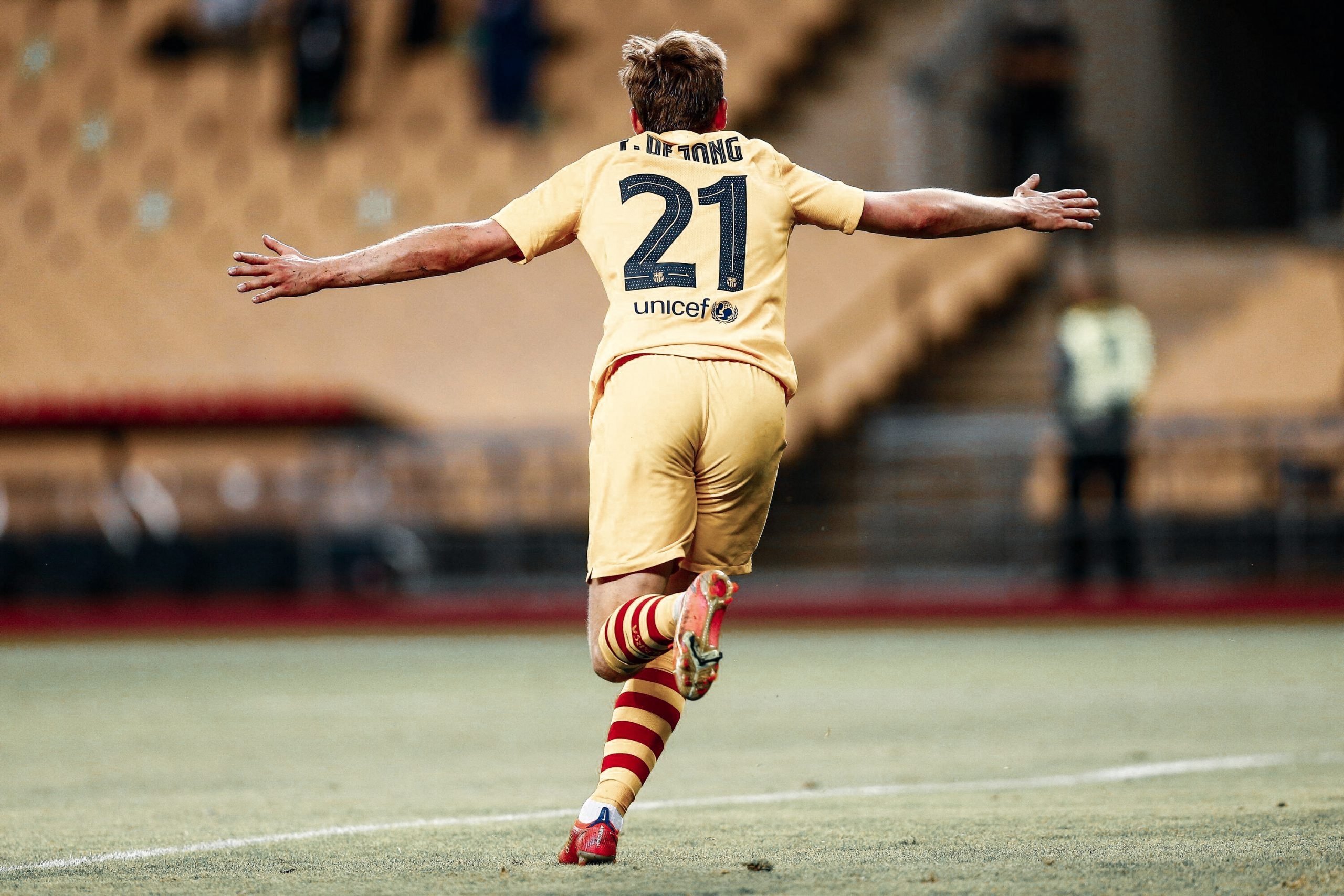 Frenkie de Jong has surely come to a position where he is one of the most influential players in the Barcelona squad. Proof of the same was his incredible performance in the Copa del Rey final as Barça hammered four past Athletic Bilbao.

Frenkie de Jong was moved to the midfield for this season’s Copa del Rey final. With Gerard Piqué back in the starting eleven, the 23-year-old no longer had to sacrifice his most suitable position and limit himself into making sure our opponent lacked space in transitions. What was even more evident was that in the formation Ronald Koeman decided to use against Athletic, de Jong would have the similar role he inhabited in recent games when playing the interior.

The Dutch midfielder had probably played his best game under Koeman, perhaps even the best since defending Blaugrana’s colours. It is safe to say that he had leverage in Sergio Busquets and Pedri, but that night, de Jong was pretty much unstoppable. Like Roberto, de Jong proved to be versatile in every aspect, but combined with his quality, it makes that more of a divergence.

He carried the ball better than anyone, excluding Messi, dictating a substantial amount of the ground, and made sure Bilabo’s transitions were cut shortly after they have regained possession. But another thing that made the difference that night was Koeman’s decision to give him the freedom to play in a similar area usually occupied by Dest. The latter is often left isolated when playing on the flank, but the Dutchman made sure that wasn’t the case on Saturday.

The fact that the Dutchman moved to the right-wing several times during the match made it possible for Barcelona to open the scoring. Messi found de Jong, and then the magnificent midfielder found a sleek pass directed towards Antoine Griezmann who scored past Unai. For the second goal, de Jong regained the ball and carried the attack before finishing the move himself.

For the third goal, de Jong combined marvellously with Leo Messi, playing a one-two to progress the ball through the right flank. Then, de Jong spotted a perfect pass into the box, allowing Messi to do what he does best. Without a doubt, no one could be wrong in stating that Frenkie de Jong was the protagonist in the final as Barça acquired their first trophy after 1 year, 11 months, and 19 days.

The Dutchman’s start with Blaugranas

De Jong was an exhilarating prospect who earned respect worldwide through his amazing performances with Ajax in the 2018/19 season. His carrying of the ball, awareness of space, and imaginative solutions in breaking opponents’ spaces were several reasons he caught Barcelona’s attention. Because of that, he was bought that same year, and he was about to step under Valverde’s tactical system.

The problem was that Barça already had incredible players in midfield at the time. Yet, de Jong gained a crucial role from the beginning of his spell at the club. Somehow, though, de Jong didn’t seem fit. But sooner than later, it was evident what the problem was. The Dutchman had little space to exploit his attributes, and the role he was given couldn’t help him become influential. The same thing happened with Quique Setién. The former coach gave him more freedom, but the system faltered, and to top it all of with the collapsing image of the club, it didn’t seem like anything would go for the better.

At the end of the 2019/20 season, Barça looked miserable after suffering another shameful exit from the Champions League, this time against Bayern Munich. Changes were needed, and one of the first ones was the decision of the board to change the managerial position. Setien left, and Ronald Koeman came. For de Jong, this was something more meaningful than to others. The player and the coach already knew each other from the national team, as Ronald managed the team before taking on Barcelona.

Nevertheless, it must be taken into account that Koeman not only took over a new club with a slightly different mentality, but he took over the club that was shattered to pieces due to all the negative surroundings. The team needed a rebuild, and there had to be some rotations and changes in Barça’s usual line-up. Unfortunately, the start for de Jong was similar to the one he had under Valverde and Setien. At the heart of midfield in the 4-2-3-1 having the role of a traditional central midfielder, moving from behind to the front, but the team needed more. That x-factor needed for the collective to work was still missing.

Moving into December, though, Koeman made a significant change. For most spectators, it was always clear that FdJ needed to have the role of a central defensive midfielder either in the solitary or double pivot. With Koeman experimenting and changing the tactical approach regularly, it was harder for de Jong to keep his consistency. Yet, Ronald made a decision that would turn out to be influential shortly.

Instead of placing him in a defence oriented role, the coach decided to use the Dutchman as an interior. It was a role the Dutchman had never played in before, but rather than looking lost and unoriented, he looked completely reborn. Suddenly, de Jong showed complete understanding of what was expected of him. His space awareness, his sleek, and quick passing, combined with his ability to come up with tremendous trough balls, made him very hard to read and interpret. What was impressive, though, wasn’t his performances but the fact that he extended his horizons with the professional approach and thrived in every role he was trusted with.

After an extensive lack of players in the defensive area and with the new system, de Jong also managed to thrive as the central defender in the three-man backline. Furthermore, he was trusted with the centre-back position, and he once again exceeded fans’ expectations. He might not have been as strong and uncompromisable as Gerard Piqué or Ronald Araújo, but he replaced those attributes with brilliant anticipation that offered him reassurance in stopping the opponent’s attacks.

What does his new role mean for the future?

If the former-Ajax sensation showed one thing this term, it was his flexibility and quality of adapting to several positions on the field. His understanding of the game, and the quality he possesses help him in looking more important than ever. In the Copa del Rey final, he took on many roles. The 23-year old offered support and fluidity in possession, depth in our midfield, and an extra few legs in the attack.

For his goal against Marcelino’s side, we were able to see the significant run he made since the beginning of this year. For the opener scored by Greizmann, he took a more demanding role, as he roved towards the wing like a wing-back before putting in a low cross. The understanding he started developing with Messi also came to the forefront as the Argentine scored a sensational goal.

There is no doubt anymore. Frenkie de Jong has evolved this season into a player that has no limits. He became a player that stopped all his restrictions and decided to unleash his potential to the fullest. All of the attributes he has – the spatial awareness, the positional knowledge, and dribbling technique, to name a few – will provide Barça with many possibilities in this new era. A player of this magnitude can help Blaugrana gain unlimited amounts of silverware in the future.