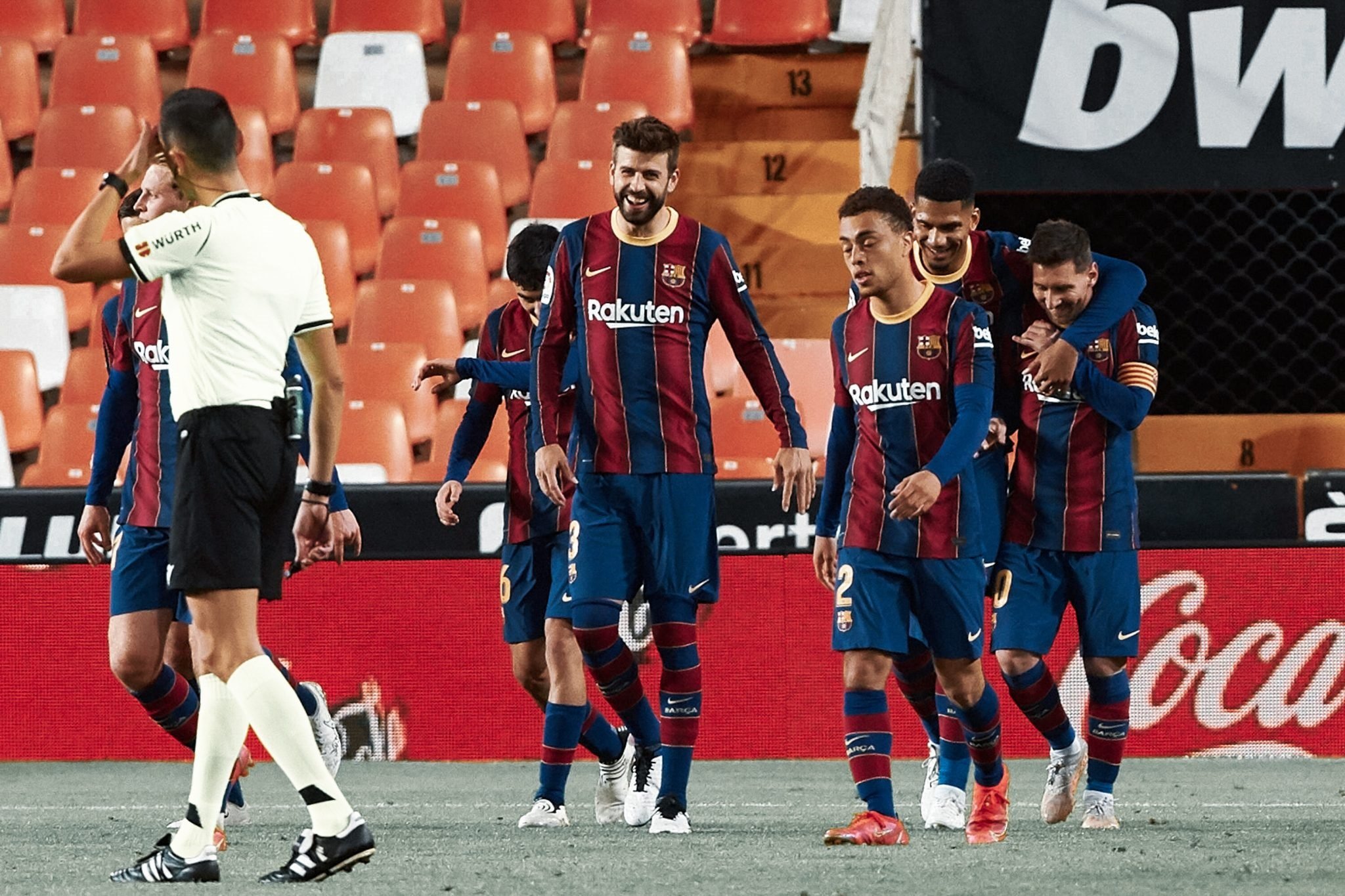 Barcelona just about managed to hang on to their hopes of a 27th La Liga title, as they secured all three points in an extremely hard-fought 3-2 victory over Valencia at the Mestella. They managed to beat Los Che at their ground for the first time since 2016 when the Catalans won with the exact same scoreline.

After the incredibly disappointing defeat to Granada in midweek, the Blaugrana bounced back in the perfect manner to gain a crucial victory. At the same time, they themselves try to win every one of their four remaining fixtures.

After a string of missed chances in a goalless first half, Valencia took an unexpected lead through Gabriel Paulista after some dreadful defending from Barcelona from a corner. However, Lionel Messi equalised after the ball, fortunately, fell to him after a missed penalty before Antoine Griezmann made it 2-1. Messi himself then scored the third with a glorious free-kick.

While it was not the most convincing of displays from the Catalans, it was enough to keep them in the running for the league title. The side showed great character to come back from a goal’s deficit against such a tricky opponent away from home. Here are three takeaways from the clash.

1. Messi and Griezmann continue to fire

The Argentine and the Frenchman have finally begun to gel with lethal effect. After a faltering start to their partnership, Ronald Koeman’s new setup with the two forwards playing alongside each other has not only helped their understanding but has also improved each one’s individual output. In terms of goal contributions, Messi and Griezmann remain the most proficient duo in La Liga.

Lionel Messi’s brace now sees him lead the La Liga top scorer charts by seven goals, as he scored his 27th and 28th goals of the campaign against Valencia. The latter was an absolutely gorgeous free-kick, which now mean’s the Argentine has scored more free-kicks than penalties since the 2018/19 season.

Griezmann, meanwhile, continues his redemption story as he found himself in the right place at the right time to hand Barcelona the lead and grab his 12th league goal of the season. His pairing with Messi now seems more organic, as the two have gotten a much better read on each other’s movements.

This was apparent against Valencia as Messi and Griezmann played several slick one-twos and got each other out of tight spaces with their clever runs. They no longer feel congested together even when they occupy similar areas. With 56 goal contributions between them in the league alone, the two are forming a wonderful partnership in a system with no natural striker.

While he has enjoyed a good patch of form lately, Clement Lenglet just does not seem to be at his composed best anymore. His errors at the back continue to pile up and often the end up costing Barcelona dearly. He just cannot seem to shake off his misfortunes, as every set of good performances is followed by the odd comical mistake that has dire consequences.

Granted, that in Valencia’s opener on Sunday, goalkeeper Marc Andre Ter Stegen might have been more at fault. However, as Gabriel Paulista met Carlos Soler’s inswinging corner, Lenglet was seen on his knees, struggling behind the Brazilian, leaving him to head the ball freely into an open net.

Although his distribution has always been a redeeming factor of sorts, against Los Che, he made some very comical decisions with the ball at his feet. Simple clearances went out of play and he could not release his teammates when they had acres of space to run into. One has to wonder whether this is misfortune, a bad patch, or just a general lack of competence.

The Dutchman has been absolutely flying this season under Ronald Koeman. Since his transfer from Ajax, he has been deployed in a plethora of roles, but he stated multiple times that he hasn’t been playing in his best position. And indeed, once Frenkie de Jong got the freedom he needed to move up and down the field, he has struck a rich vein of form.

Against the home side last night, he was near flawless once again. Incredible with his ball progression and distribution, with a 91% pass success rate. Tireless as ever, he covered every blade of grass while pressing and recovering up until the final whistle.

The Dutchman’s late-arriving runs into the box have been a cornerstone of his incredible evolution this season. And that facet of his game proved to be a revelation once again last night. Jordi Alba’s floated cross into the box found De Jong, who had made a sensational run into the box and leapt to meet the ball. His header was well struck and forced Jasper Cillessen into a save, but the rebound fell kindly for Griezmann and the Frenchman slotted it home to hand Barcelona the crucial advantage at the Mestella.

Another wonderful showing from the Dutchman, who certainly has to be among the contenders for Barcelona’s player of the season. His run of form will be crucial in the four remaining games of the season.

Although Barcelona still depend on their rivals to drop points even if they win all of their remaining ties, there is no scope to let up. The margin for error has dwindled to nothingness, as the focus now turns to matchweek 35. The most enthralling title race in La Liga’s recent history will see all four title contenders go head-to-head on the same weekend.

Barcelona will face leaders Atletico Madrid, while Real Madrid take on Sevilla in what promises to be perhaps the most thrilling round of fixtures so far this season. While the Garnet and Blue’s title hopes were severely dented, there is hope yet, after this vital win away to Valencia.