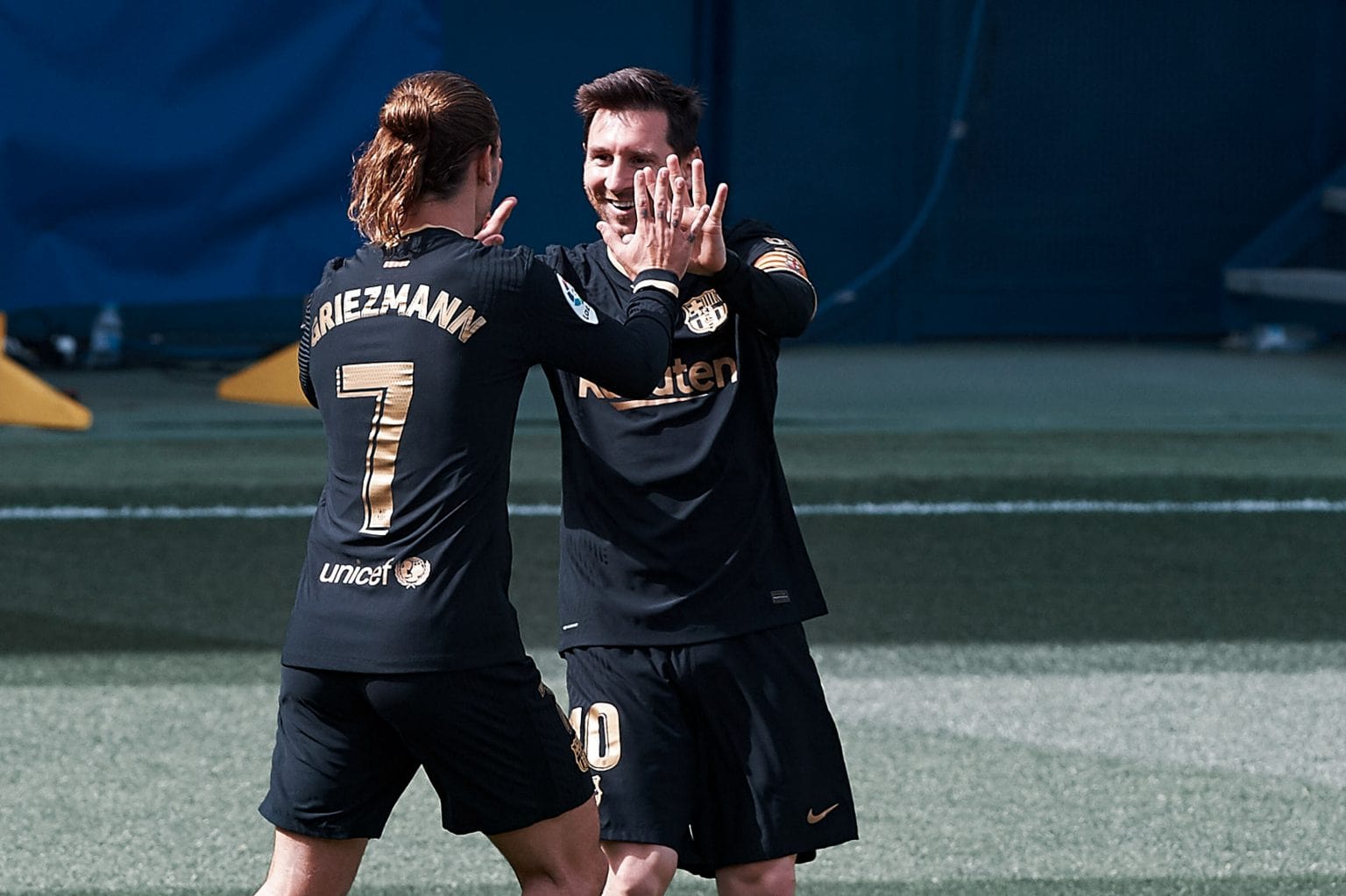 Luis Suárez hitting the exit door last summer was certainly perceived with a sense of relief amongst the Blaugrana community. Having warranted the right to be acclaimed as one of Europe’s greatest strikers, a painful decline in physicality was clearly affecting Suárez’s performances in high magnitude fixtures, leading to a rather bittersweet ending at Barcelona. Moving on from the Uruguayan gunman became a necessity after suffering endlessly on the big stage. But his stiff presence does not lurk around in the starting XI anymore, and failing to replace him with an adequate number 9 has also taken its toll on the club.

Selling Suárez may have been a timely decision, yet, it’s safe to say there is no rose without its thorns. Over the course of this campaign, Ronald Koeman has attempted to paper over the cracks upfront by deploying a multitude of systems, formations and tactics. In fairness, the Dutchman’s adaptability without a natural number 9 has been impressive; with the introduction of false 9s, a frequent alternation of roles has been visible for most of the season. This does not come as a surprise, given he was once tutored by one of the game’s greatest tacticians: Johan Cruyff.

Being able to structure a team without an out-and-out number 9 is something Koeman appears to have inherited from the late Cruyff. However, even if the legend had mastered the art of positional play, he never entirely neglected fielding a natural number 9 – Romario being the prime example. Similarly, despite Koeman yielding results multiple times without the presence of a “fox in the box”, it seems as though he is inclined to making considerable tweaks consistently to fill that gaping hole.

In the primary stages of this term, Koeman was placed in a tricky position due to not being facilitated by the board in any way. His willingness to sign Depay was never truly taken seriously and seemed improbable, with the club in a financial crisis.

The beginning of the season saw Messi occupying the centre-forward position, undertaking the role of what appeared to be the false 9. However, Koeman’s tendency to continuously deploy the 4-2-3-1 formation meant that the Argentine was often left isolated and clashing with other number 10s on the field. His moments of magic on the ball remained unparalleled, yet being primarily a number 10, him dropping deep invariably led to Philippe Coutinho or Antoine Griezmann being hindered; Messi’s attempt at cooperating with two similar players alongside him while also filling the gap of a striker was not entirely successful, with him evidently out of his comfort zone.

Consequently, Koeman’s second venture was to place the young Ansu Fati in the number 9 position. Having dazzled spectators on the flanks, the young starlet had shown glimpses of evolving into a street smart striker. Making runs in behind, positioning himself inside the box and being blessed with a beautiful eye for goal, Koeman appeared to have struck gold.

Unearthing a gem like Fati in a position he was slightly unfamiliar with paid him dividends in the Clásico as the 18-year-old scored a terrific poachers goal. Woefully, Fati’s endeavours in that position were cut short after enduring a knee injury. Ever since then, the Barça coach has only once committed to employing an instinctive number 9, who was, on paper, deemed as Suárez’s actual successor. Initially, Martin Braithwaite struggled to convince Koeman that he had the quality to play regularly, but the Dane began to make hay with the little opportunities he had. Braithwaite became a trusty figure in the XI; his purple patch in November-December earned him a great deal of appreciation.

Nonetheless, it slowly became apparent that his inclusion with Messi and Griezmann seemed unfeasible, with positions often clashing and the lack of width becoming apparent. Koeman then resorted to playing the former Leganes man out wide, but it never truly benefited him, nor did it the front line. Therefore, in 2021, the front three of Griezmann, Messi and Dembélé arguably proved to be the most availed and successful trio. While Griezmann occasionally was deployed as the striker, it was, for the most part, Messi undertaking the role of a false 9 in the traditional 4-3-3 formation, luring in centre-backs and being a focal point of attention for back-lines.

This bore Barça fruit on select occasions, such as the league game against Athletic Bilbao at the San Mames or Granada at the Los Carmenes. As a consequence of being on the ball more often and the team complementing Leo’s tendency to drop in midfield, Messi would successfully break free from cages surrounding him and situate himself in areas of danger.

Though Messi operating in that area arguably was most effective against low blocks, gradually, Koeman was forced to go back to the drawing board. The most recent and interesting advancement now is the addition of Dembélé in the 3-5-2 system, which prevailed particularly against Sevilla. Albeit Koeman moulded a side of positionally flexible individuals, if there was ever a game that highlighted Barcelona’s vulnerabilities in that centre forward position this year, it was certainly the Clásico. Despite Dembélé being initially fielded as a striker, it was clear that the Frenchman was way out of his comfort zone.

Against a mid/low block, where space was limited and chances exceedingly minimal, Dembélé was seen having a rough time making those classic runs in behind. A ball-dominant player such as him was expectedly going to be bullied against one of Spain’s most organized defences. Unlike Real Sociedad or Sevilla, Madrid were unwilling to offer heaps of space for Dembélé to feast on. Sitting deep and surrounding him with men whenever he had the ball, there was indeed a lack of penetration, and this stiffness in the front line indirectly affected another player quite clearly: Lionel Messi.

With age catching up to Leo, he needs aid. Asking him to be the difference-maker without any penetrative runs from his supporting cast or players attracting attention, the Argentine is fairly easy to predict. As Dembélé struggled to truly fixate defenders, Messi receiving possession immediately led to him being isolated and lacking options. While Dembouz is known to be a magnet continually luring attention, he was incredibly ineffective centrally.

In addition to the the same, while Griezmann is far from a natural striker, he does boast of predatory instincts like off the ball runs and capitalising on loose balls, both of which paid dividends against Villarreal in the 2-1 win. The World Cup winner’s two goals helped cap off an important win as he became the first Barcelona player not called Messi to win a man of the match award for the club in 2021.

Reverting to the 4-3-3 in the second half was, however, an instant game-changer. Unlike Dest, Dembélé was more active up-field and showed initiative to take on his men, attracting attention from central areas and opening up the pitch. Although there was no longer a number 9 upfront, there were more options, with De Jong, Mingueza and several other players habitually making entries inside the box. This poses the question: do Barcelona truly need a striker?

Dembélé will unquestionably thrive against high lines, but against a team like Madrid, he has proven that he is mostly valuable out wide. As was seen in the second half, Barça fared well even though they did not possess a striker in the center, solely due to the fact that Koeman has done well to mould his side into positionless architects. Entries inside the box from De Jong, Griezmann, Mingueza, etc, imply that there is more positional flexibility from the team as compared to a few months ago.

Thus returning to the question, Barcelona do not necessarily need to sign a striker to reclaim their throne in Europe. Yet, it would be in Koeman’s best interest to show more flexibility based on his opponent’s level. Without a striker, he obviously runs the risk of lacking a poacher and will be forced to repetitively change his approach, which can disorient the team’s flow. Koeman has certainly not been helped by the injury of Fati, who would unquestionably prove to be his biggest signing next season.