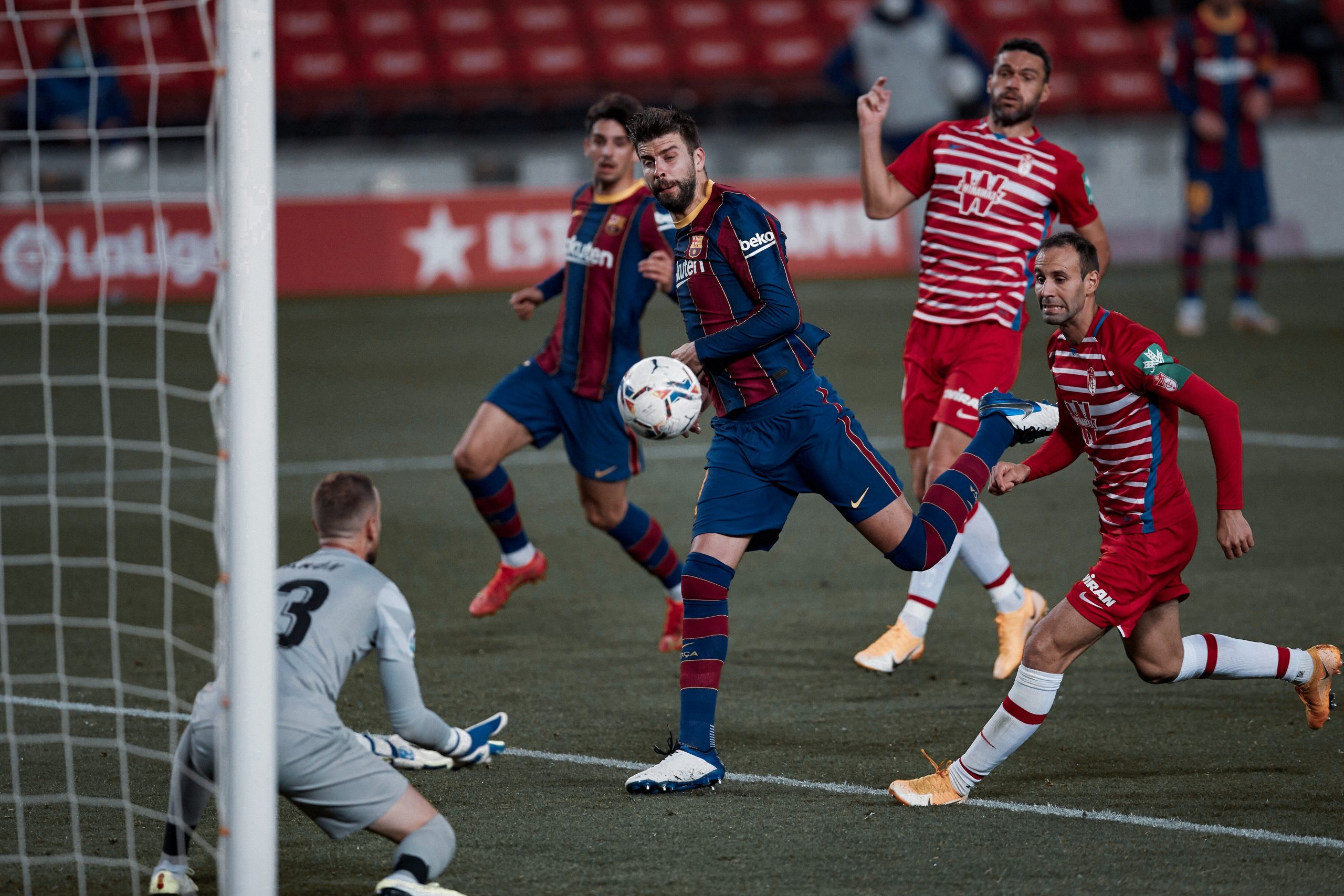 Barcelona returned to the Camp Nou on Thursday night to play their game in hand against Diego Martinez’s Granada side. The Catalan side sought to go top of La Liga for the first time this season but failed to overtake Atletico Madrid in what was a glaring missed opportunity.

Granada provided a stern test for Ronald Koeman’s men but fell behind on the 23rd minute after a wonderful move between Sergio Busquets, Antoine Griezmann and Lionel Messi. Messi’s goal made the Argentine the leading scorer in Europe in 2021, moving one ahead of Robert Lewandowski and Kylian Mbappe.

Barcelona had chances to grab a second through Messi, Griezmann and Samuel Umtiti but were punished for their lack of composure when Granada equalised through Darwin Machis after an avoidable mistake from Oscar Mingueza.

Diego Martinez’s men took the lead on the 79th minute after a fantastic header from Jorge Molina leaving the Blaugranas chasing an equaliser. The Catalan side failed to grab that elusive goal, leaving Barça two points behind Atleti and level with Real Madrid in 3rd with five games left to play.

Here are three takeaways from Barcelona’s setback against Granada.

Barcelona had a unique opportunity on Thursday night, with the top of La Liga at stake for the first time this season. The Catalan side faced a depleted Granada side at home in a match that was in hand and failed to capitalise on the opportunity, giving up control of their own destiny in the process.

The defeat was a missed opportunity for Ronald Koeman’s men in a game they dominated, with just a second goal absent from what was looking like a comfortable win. The defeat leaves Barça two points behind Atletico Madrid in first place and level on points with Real Madrid, who are sat in second on head-to-head wins.

Despite this setback, the race for the title is far from over. All four teams in the race have tricky ties ahead, and game week 35 sees the top four playing each other. Table-toppers Atleti have the easiest run-in on paper, but a defeat to Barcelona would see them go a point behind the Catalan side. Sevilla have the toughest run-in, whilst Real have the Champions League football to worry about in the final weeks.

This is not the end for Barça and is ultimately a roundabout way of saying buckle up and enjoy the ride.

Sergio Busquets performance will probably get lost in everyone’s despair after the defeat, but it was something to behold up to the point where Barça fans most likely stopped enjoying the game.

Busquets rolled back the years with a beautiful demonstration of passing, awareness and control, and the performance comes as another that can be added to the folder of impressive displays in the recent run of the revived 32-year-old. Busquets quarterbacked the game, creating key chances for Lionel Messi with beautiful, precise passes, spread the ball out wide to stretch the Granada defence and controlled the tempo of the game.

In numbers, the Spaniard had 12.7% of the overall possession the highest on the pitch, a pass success rate of 91%, completing 124 out of 137 attempted, made three tackles, won 12 of 14 duels and lost the ball only once.

Busquets was a joy to watch on Thursday night and for the Garnet and Blue, they will need the midfielder to continue rolling back the years if they are to win La Liga.

3. Lack of composure at both ends of the pitch

When a game is dominated by one side, especially with a lead, losing from that position is usually down to a lack of composure at both ends of the field. This was certainly the case with Barcelona against Granada. The tie should have been out of sight by the time Machis equalised, and the Catalan side paid the price for not being clinical enough in front of goal.

At the other end of the pitch, the lack of concentration that has been synonymous with the Catalan giants over the last few seasons crept back into the defenders and could ultimately cost the side La Liga for want of being dramatic.

Granada showed signs of intent in the first half, but the Blaugrana defenders dealt with everything comfortably.

That intent became reality in the second 45 after Oscar Mingueza failed to deal with an easy through ball, allowing Machis through on goal to level. The second goal was just as bad, as the Barcelona defenders completely switched off and allowed Jorge Molina with a free header on goal after previously leaving Adrian Marin the time to cross.

With five games remaining, defence lapses like this can be extremely costly and could be decisive in how La Liga concludes. Not taking chances up top can happen, but lacking concentration in the back can be unforgivable, a lesson Barça learned on Thursday night.