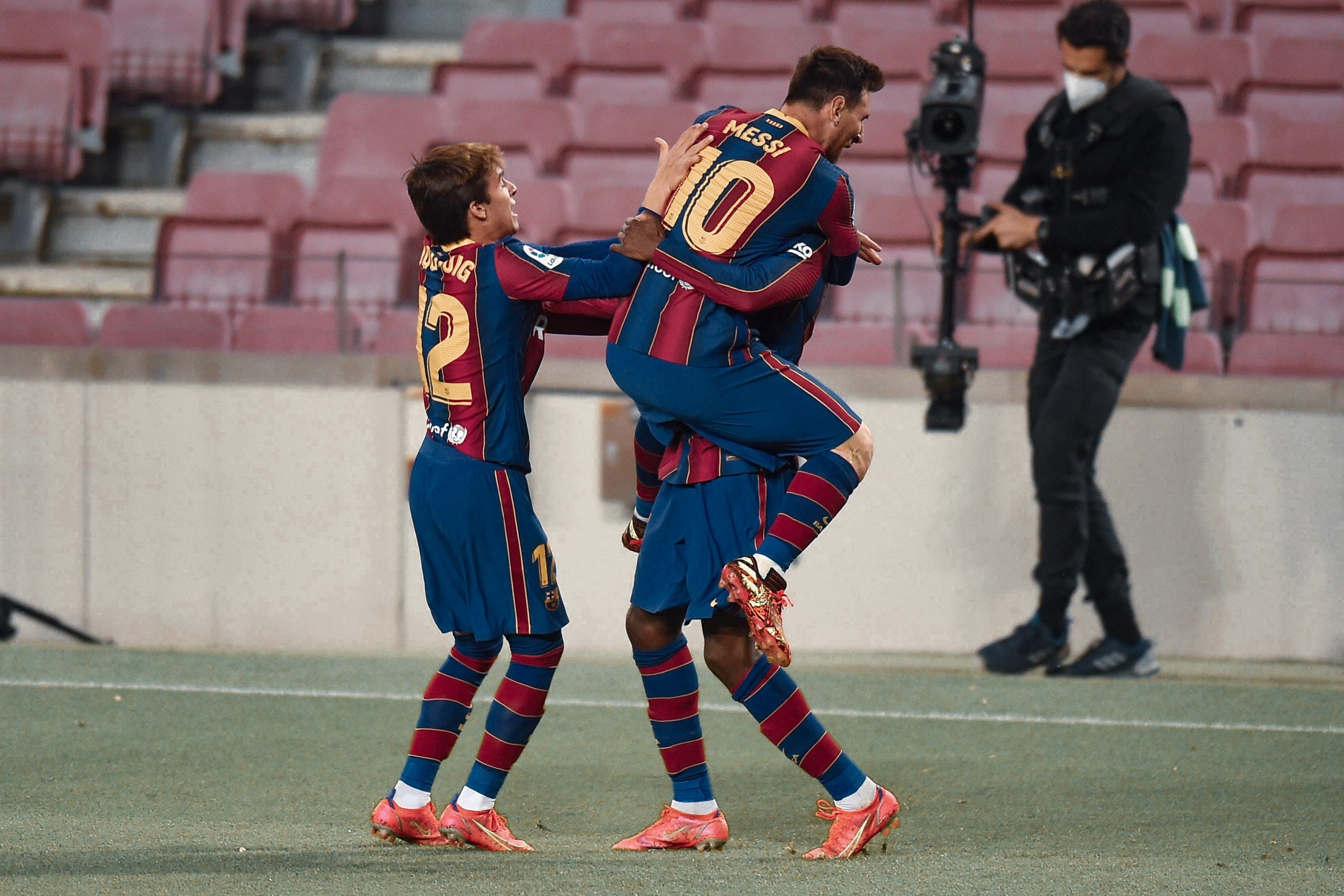 Barcelona continued their superb run of form on Monday night with an important 1-0 win over a resilient Real Valladolid side to make it 19 games unbeaten in La Liga.

Ronald Koeman’s men went into the match knowing that a win would not only give them three points but control of their destiny, as Atletico Madrid felt defeat this weekend at the hands of fourth-placed Sevilla.

The Catalan side came up against a well organised and threatening Valladolid side in the first half but a change in formation and a persistent performance in the second half encouraged the Blaugrana side to secure all three points in the last minute through Ousmane Dembele and secure a win before heading into next weekend’s clash with arch-rivals Real Madrid.

1. The La Liga title race is on and it won’t be easy

14 points was once the gap Atletico Madrid enjoyed over Barcelona this season, as it looked like Barcelona would have to settle for a top 4 battle as the two Madrid clubs fought it out for the title.

Fast forward to now, and Barca have control of their own destiny after this weekend’s results, as the Catalan side moves to within a point of Diego Simeone’s side.

For Barcelona, it is performances like this that will make the Catalan side champions. Real Valladolid were well drilled throughout the match and offered a noticeable threat on the counter, whilst Barca looked tired and lacked rhythm. Ronald Koeman’s men persisted till the last minute and were rewarded thanks to a beautiful volley from Ousmane Dembele.

For Barca fans, seeing their team secure three important points in the final minute offers them hope that the mentality of this team has changed. Barcelona, over the last few years, have been victims of mental collapses in the final minutes and to be on the other side of it in recent weeks is very encouraging for the run-in.

This mentality could be what sees Barca over the line this season, as Valladolid will not be the last struggling team to put up a fight against the Catalan side in their bid to survive the drop.

The title race looks like it will go down to the wire this season, and next week’s trip to fellow title contenders Real Madrid offers Barca the perfect opportunity to show their intentions.

2. De Jong is vital in midfield

Frenkie De Jong has proven during his time at Barcelona to be one of the most versatile players in the squad, and this season has been no different with the Dutchman filling in at centre back on occasions due to the lack of options in that position thanks to injuries.

De Jong started in the position again against Real Valladolid, and although the midfielder did not have a bad game in this role, it was what the Dutchman offered when he stepped into midfield in the last five minutes of the first half that made the biggest statement. After a poor first 40 minutes, De Jong joined attacks, and Barca were noticeable more threatening as a result.

Ronald Koeman noticed this and switched to a 4-3-3 for the second half, with De Jong moving back into midfield. From the get-go, the Dutchman helped create overloads, made effective runs forward, and his presence made it difficult for Real Valladolid to transition.

De Jong ultimately went on to help Barcelona secure victory, as it was the Dutchman’s cross that started the move for the Catalan sides only goal.

The reasons for De Jong playing at centre back are obvious, but it does not mean he has to play there. In just two halves of football, the importance of the 23-year-old to this Barca side was evident, and for the run in De Jong should be nowhere else but at the heart of Koeman’s midfield.

3. Koeman continues to show off his tactical side

Throughout the first half, Real Valladolid were the better team, as Sergio’s men remained compact and transitioned in numbers, creating the best chances of the half and restricting Barcelona to very little.

Having started in a 3-4-3 formation, Ronald Koeman decided to switch to a 4-3-3 for the second half and, with that, moved Frenkie De Jong into midfield. This allowed Barca to restrict Valladolid transitions, helped overload the midfield, and the higher positions of the midfielders made the Catalan side a more attacking threat.

Koeman deserves massive praise for this tactical tweak, as it eventually led to his side picking up the three points.

Although it seems like a simple change, a lot of managers might have relied on their pre-match preparation and would not have had the courage to move away from a formation that recently has been delivering results. Koeman did and reaped the rewards of it.

Ronald Koeman’s tactical understanding of the game was highly questioned upon his appointment as Barcelona manager, and tonight, like many others in the season, the Barca manager has proven many people wrong.

If Barca goes on to win the league this season, it will not only be a result of the Dutchman’s man-management skills but his tactical ones as well.