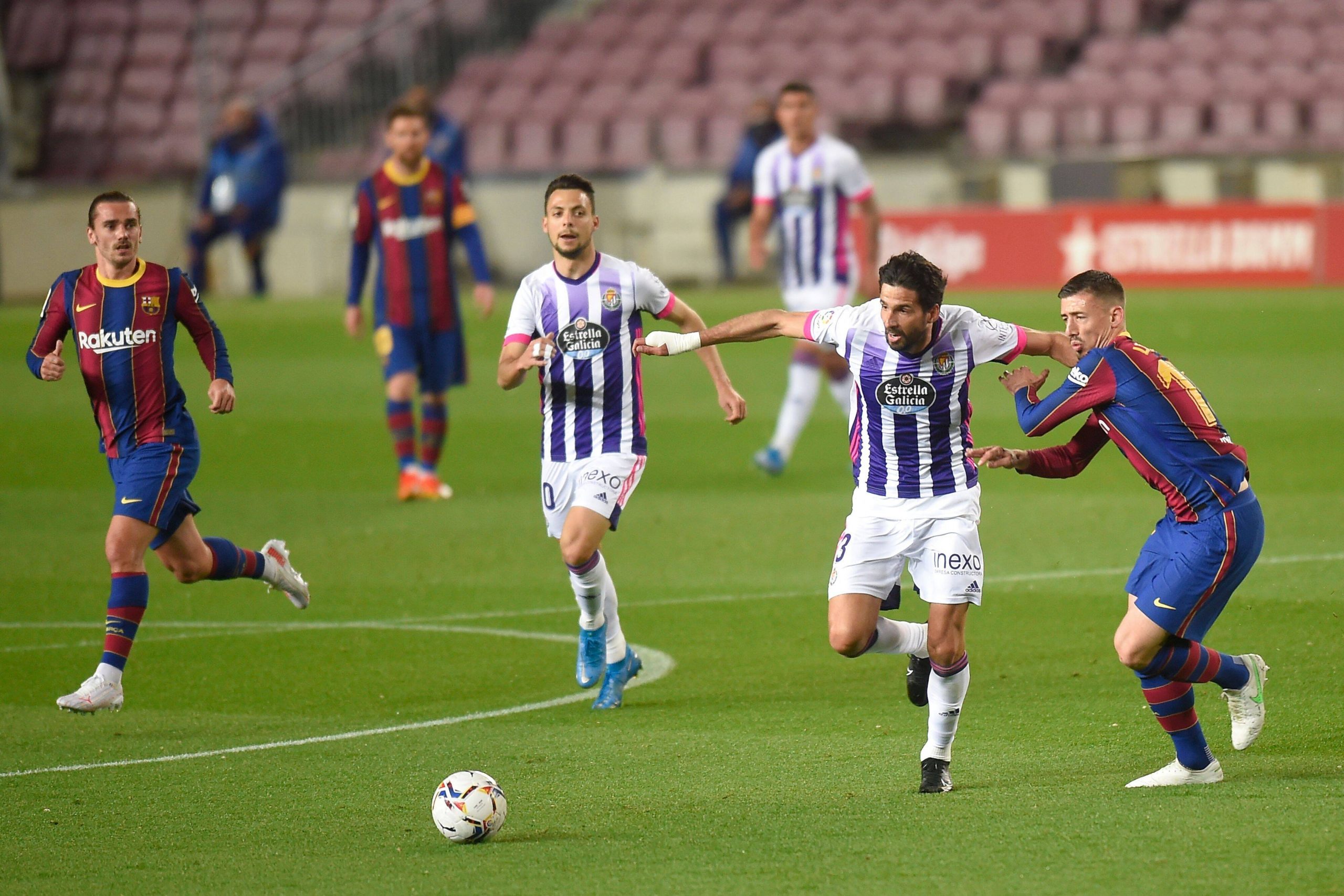 Barcelona hosted Real Valladolid at the Camp Nou on Monday night, fighting till the end to win a difficult game by just a single goal scored by Dembele. It was a tough match for the Garnet and the Blue; however, they managed to grind out a result, not putting in their prettiest display of the season. Nonetheless, they managed to bring all three points back home, with fairly adequate performances from most of the team’s players.

Ter Stegen enjoyed a relatively quiet night, albeit being tested on a few occasions. Apart from a few simple saves, the German was mostly solid in his ball distribution, crucial to the Blaugrana in playing out of Valladolid’s high press.

Alba was once again crucial in Barça’s build up play, registering over 100 touches once again. He registered one key pass in the whole night, not emulating his usually precise passing in the opposition box. However, the Spanish fullback was still a menace throughout the night, being constantly hunted by his fellow midfielders in attacking moves.

The French defender put in a fairly solid shift, covering his defensive grounds. He registered six clearances and two tackles, while working well in Barça’s ball circulation. He also came out of his defensive line a few times, carrying the ball. A fairly content performance for the Frenchman, who has struggled this season.

The Dutch midfielder was one of Barcelona’s better performers on the night, covering all ends of the pitch in three different positions. The team changed formations three times, only possible due to de Jong’s versatility. He started the game as a Libero in the centre-back role. He was then shifted into the right centre-midfield, and ended the game as one of two double pivots. De Jong’s performance was highly satisfying. He covered the tasks of defending, ball circulation, offensive threat, as well as creative duties all in one match. The Dutchman even managed to send in the cross that made Dembele’s goal possible, truly covering each and every acre of the field. A true wild card for the Blaugrana.

The 21-year-old Spanish defender put in a relatively average performance, with no real noteworthy contribution. However, the versatile defender once again proved he is a reliable defender in Koeman’s squad, displaying both defensive solidity as well as the ability to both carry and pass the ball out of the defensive line.

Dest was unable to impact the game in any real way. The American is a less sought-after attacking outlet than his fellow fullback Jordi Alba. The right-back was unable to show decisiveness in the final third, failing to complete any of his two attempted dribbles. While he did register a key pass, Dest’s contribution in the game was nothing special.

The Spanish midfielder once again put in a fantastic display, silencing doubters game-after-game. After two highly satisfying performances with Spain, Busquets has returned to the Catalan capital with his A-game, keeping the play ticking with no real errors. The Barça midfield would truly be at risk of floundering without the ingenious Spanish veteran.

Pedri’s positional understanding for his age is jaw dropping. The young Canary Islander seems to receive and play the ball in the perfect position for every play, almost always pulling out a few yards of space from seemingly no where. The eighteen-year-old showed, in yet another wonderful display, his intelligent understanding of the pitch and his fellow teammates. He was always available as a passing option while circulating the ball with immense efficiency. Pedri also got into dangerous positions in and around the eighteen-yard-box several times, registering a shot on the post. It seems that his confidence is growing with each outing.

Griezmann started the game off brightly, showing the confidence to drop deep and create attacking plays. Once again, he displayed his unparalleled dedication to running back and helping in defence. However, the Frenchman failed to really threaten Jordi Masip on the night, having missed a glaring header into what was virtually an empty net. It was not by any means a poor display, as the Frenchman was efficient in his linkup play while also contributing thoroughly in defence. Nevertheless, he failed to provide any real offensive threat.

The six time Ballon d’Or winner had a relatively off night, failing to register a goal or an assist for the first time in fifteen league games. Nonetheless, the Argentinian’s impact on the game always goes beyond just direct goal contributions. Having registered five key passes and seven shots, Messi was an attacking menace throughout the match, also acting as the Blaugrana‘s sole effective playmaker. While it was not his best night, it is only his own high standards that prevent him from being applauded for world-class performances, simply because world-class is a standard he has long surpassed.

The French winger was the difference-maker in the match, registering the only goal in the entire match. He attempted four successful dribbles and even managed to register three shots on target. Further, the 23-year-old started the game playing in the striker position. He then shifted onto the right-wing and finally the left-wing, showing his phenomenal versatility and ambidexterity. Dembele threatened from every single position he was employed in, turning defenders in and out all night long. He was smartly positioned to get on the end of de Jong’s cross (though with a touch from Ronald Araujo), and scored the game-winning goal.