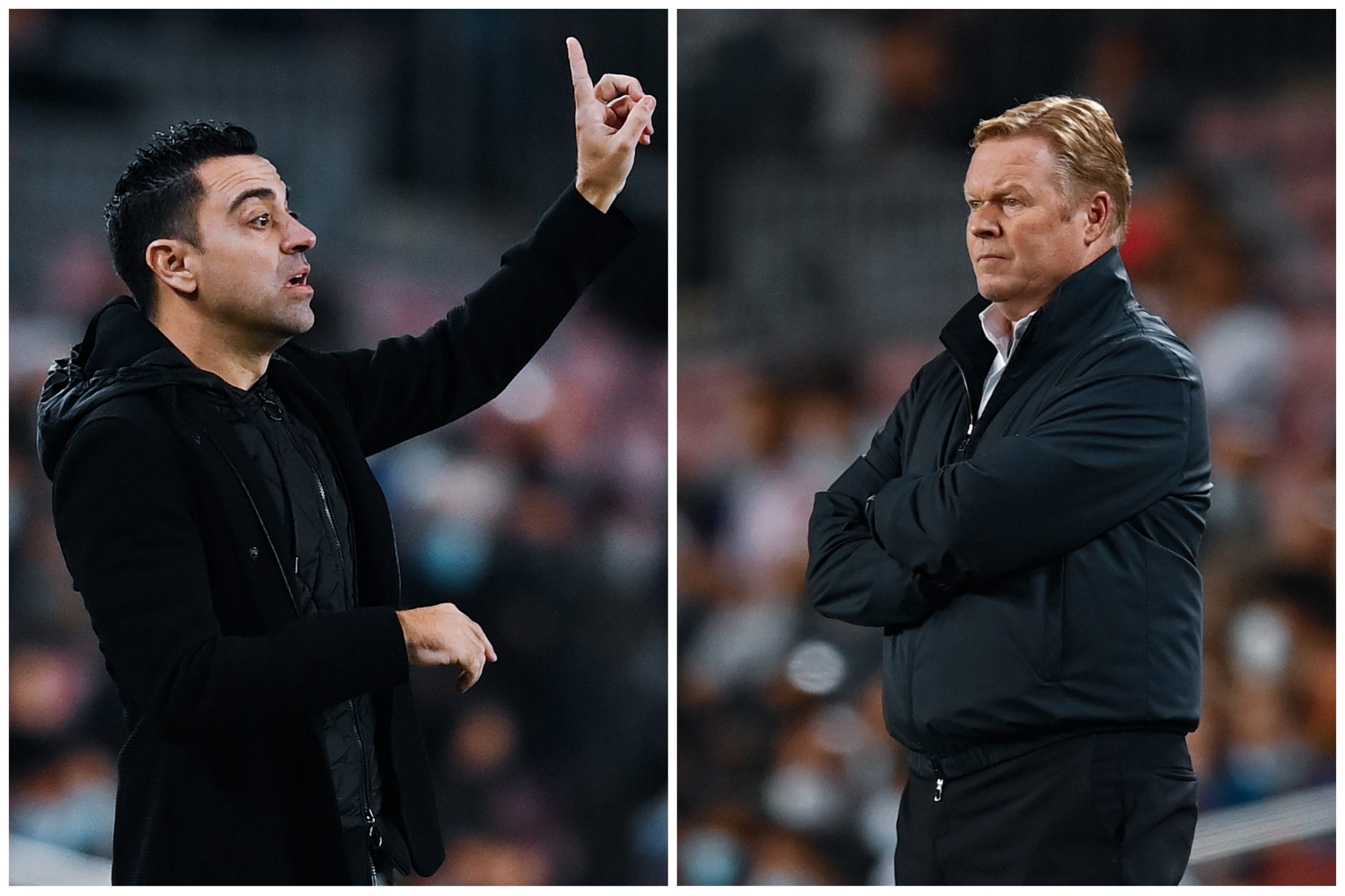 When Xavi Hernandez took over the helm at Barcelona a few weeks ago, culés expected change – and rightly so. What they didn’t expect, however, was how quickly that change would come.

After only 180 minutes of action, Barcelona look like a reinvented side. Above all else, there is more organization, structure, and purpose. Yes, there are still some mistakes and errors, but old habits die hard, don’t they?

In the following article, Barça Universal will explore the differences and similarities between Koeman and Xavi’s Barcelona, looking at team structure, tactical setup, and specific phases of play. Just as night differs from day, so do these two versions of the Blaugrana.

Ronald Koeman’s Barcelona was often hard to define. Yes, they looked to keep possession, play a high line, and use full-backs to stretch out the opposition, but attributing them a clear identity and style of play was seldom easy. They were consistently inconsistent, and seemingly lacked any significant tactical discipline or direction.

By the end of Koeman’s reign, the squad was as disjointed as ever. As Oscar Mingueza put it so aptly last week, “The team stopped believing in Koeman’s idea and everyone tried to solve their own things.”

Part of the hope – and expectation – of Xavi’s arrival was for him to bring stability. Besides mending player relationships and enhancing squad harmony, this also meant tactics, structure, and team set-up.

Ideally, Xavi’s knowledge of the game and tactical comprehension would be put to use for some of the most technically gifted players in world football. Further, that there would be a clear team structure present throughout each game. Small steps, but still steps in a positive direction.

Thus far, Xavi has undoubtedly fulfilled these lofty expectations; he has created a team characterised by intent and intelligence. Watching a Barcelona match, one can clearly see a team that is more tactically disciplined than in recent memory, one that is organized, and one that displays eleven players in unison, not a group of disparate individuals.

Xavi’s team is defined by the same basic principles as Koeman’s, but everything is taken up a notch pertaining attention to detail and execution.

Looking specifically at tactical setups and formations, let’s explore the differences and similarities between both Barcelona sides.

His set-up was fairly straightforward: play with attacking full-backs, instruct the number 6 (Sergio Busquets) to tuck in between the two centre-backs in attacking phases, have a center-forward comfortable with dropping deep to create space for runners, and have interiors operating in and around the half-spaces.

Xavi’s Barcelona have taken two distinct shapes, a 4-3-3 and 3-4-2-1, however certain principles remain consistent. Against Espanyol, the manager employed a 4-3-3, ripe with everything he promised to deliver from stretching the pitch as wide as possible to employing a high line of engagement.

Still, Xavi’s 4-3-3 differed from Koeman’s in various ways. In possession, Mingueza, playing at right-back, was instructed to tuck in and form a quasi back-three with centre-backs Gerard Pique and Eric Garcia.

Jordi Alba (at left-back) conversely played up the pitch, acting as a winger instead, creating a 3-3-4 shape. This meant that Ilias Akhomach (and later Ez Abde) was isolated on the right-hand side, required to keep width. This heavily overloaded the left-hand side of the pitch, but we will look at the repercussions of this later on.

Under Koeman, both Alba and Mingueza would have been instructed to play high and wide, whereas Xavi employs his wingers to do so. When Sergino Dest returns from injury, it will be worth keeping an eye on how Xavi utilizes him and Ousmane Dembele on the right.

After all, both excel staying wide and taking players on with plenty of space, and Dest may not exactly thrive tucking into the centre-back position. On the left, the eventual return of Fati will allow for natural inside cuts and overlaps for Alba, therefore that is less of a concern.

Midweek against Benfica, Xavi opted for his preferred 3-4-2-1 shape, a formation he grew accustomed to with his previous club Al Sadd. This was also fairly distinct from Koeman’s 3-4-3 and 3-5-2.

Firstly, Koeman utilised five defenders — three centre-backs and two wing-backs (essentially wingers), whereas Xavi went with four (Araujo, Pique, Lenglet, Alba), and had Yusuf Demir play on the right where a wing-back would typically slot in.

Secondly, at the heart of Koeman’s three-at-the-back formations was the midfield trio of Busquets, Frenkie de Jong, and Pedri. For Xavi, he had a fluid and versatile midfield four: Busquets, de Jong, Gavi, and Nico Gonzalez. This ensured numerical superiority in the middle of the park, as well as offered more bodies in the box.

Moving more in-depth, let’s take a look at specific changes in and out of possession. Perhaps the biggest, or most notable changes in Xavi’s Barcelona are the consistent patterns of play, tactical discipline, and attacking cohesion. While Barcelona may not be finishing their chances, they are certaintly creating them.

Looking at patterns of play, Xavi instructs his team to overload one side of the pitch, often the left-hand side, and quickly switch play to the other. Ideally, the opposition is caught on their heels as they gather and wingers are isolated in 1 on 1 situations, ensuring qualitative superiority.

Elsewhere, interiors such as Frenkie de Jong and Nico make bursting runs into spaces behind the opposition backline, capitalising on movement from Memphis Depay. This is all far from what culés would often endure watching Koeman’s side (particularly in recent memory): non-stop crosses into the box for players who did not excel in the air.

Xavi has also fascinatingly employed a “square” midfield, such as against Benfica with Frenkie, Busquets, Nico, and Gavi. This assured numerical superiority in a key part of the pitch. In fact, it worked wonders as the Catalans dominated the middle of the park.

One thing that has remained consistent with both managers is a love of playing down the left-hand side. With Alba, Gavi, Ansu Fati, de Jong, and even Memphis Depay who loves dropping into the left half-space, there is an over-abundance of creativity.

However, the key difference is that Xavi uses this to take advantage of how open the right-hand side becomes, whereas Koeman seldom did.

The concept of superiority reigns supreme for Xavi. In attack, numerical superiority comes in overloading the left-hand side of the pitch, qualitative superiority when isolating defenders and wide-men, and positional superiority is delivered through the interiors operating in the half-spaces.

Out of possession, Xavi’s Barcelona stands out from Koeman’s in that his pressing scheme is more urgent and organized. Under Koeman, players would often break out of their defensive lines in an effort to win possession or chase an opponent, thereby dismantling their entire defensive structure.

Now, players seem more intentional with their pressing, knowing when it is their turn to run or stay back.

Whatever has changed on the training pitch has worked wonders so far.

Seeing so many positive changes in only two matches is not only a testament to Xavi and his coaching staff, but also the players’ responses as well. The team has also fought with spirit and determination, staying focused for the full 90 minutes against Benfica in particular.

Hopefully, they aren’t too disheartened by the draw, rather confident that with the right luck and proper practice, they can become a real force.

The foundation of Xavi’s long-term project is coming into place: it is secure, structured, and exciting.