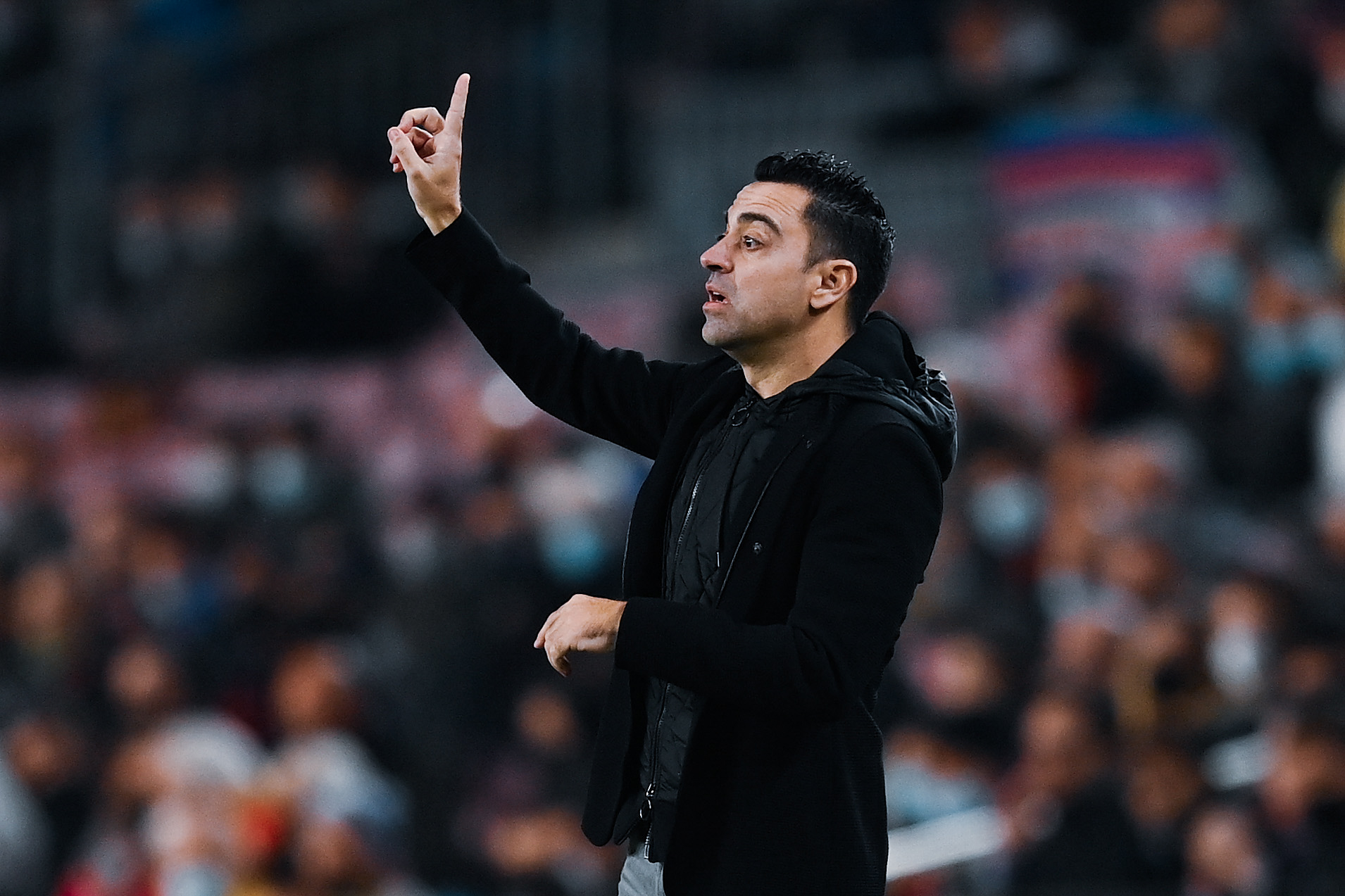 The new era at FC Barcelona has begun under Xavi Hernandez. The former Barcelona midfielder was at the heart of the club’s single most successful period. Now, as a manager, he seeks to replicate what his role models in the late Johan Cruyff and Pep Guardiola have done at Barça.

His first game in charge of the garnet and blue was not the most glamorous, nevertheless, it left a lot to be hopeful for. As he repeatedly said in the post-match press conference, there is much left to be improved. Xavi is more than justified in saying this, as, despite all the relative optimism, all good things take ample time to fabricate.

Subsequent to his victory over an old foe in RCD Espanyol, Barça Universal explores what in what ways Xavi showed clear intent from the get-go.

Brilliance on and off the ball

There is a significant disparity between what people think tiki-taka is and what it actually is. Generally, when speaking of this passing style, the public refers to positional play with fast passing, which is what Barcelona are best known for and have, since his departure, tried helplessly to replicate.

Tiki-taka, in actuality, can easily be used as a method for time-wasting and can end up being incredibly unproductive unless used to preserve a lead.

Pep then added the following, which further revealed what his preferred style of play truly is: “Don’t believe what people say. Barça didn’t do tiki-taka! It’s completely made up! Don’t believe a word of it! In all team sports, the secret is to overload one side of the pitch so that the opponent must tilt its own defence to cope. You overload on one side and draw them in so that they leave the other side weak.”

Pivotal to positional play is the mobilisation of spaces on the pitch to generate numerical and positional superiorities. By forcing a team to abandon their positional references, they are more prone to attacks.

He then concluded by stating what the goal of this shift in positional balance was: “And when we’ve done all that, we attack and score from the other side. That’s why you have to pass the ball, but only if you’re doing it with a clear intention. It’s only to overload the opponent, to draw them in and then to hit them with the sucker punch. That’s what our game needs to be. Nothing to do with tiki-taka.”

With Xavi Hernandez’ Barcelona, it is admittedly just early days. Nevertheless, the Spaniard has shown that his tactical blueprint is one that subscribes to the philosophy of El Juego de Posicion, or positional play. In many phases during Saturday’s game against Espanyol, the Catalans demonstrated that what Pep Guardiola spoke of is what is making its return to the Camp Nou.

From the very onset, attacks have been shown to start from the goalkeeper. In itself, it stays true to Johan Cruyff’s words, that “[his] goalkeeper is his first attacker.” In this most crucial of phases, in his passing, he was the individual with the highest passing accuracy in the entire team, at 100%. This in itself is evidence that his teammates were better positioned than they usually are, leading to a net zero ball losses.

Once the ball has left his feet, the ball is moved to one of the ball-playing centre-backs in either Gerard Pique or the precocious passer Eric Garcia. The process afterwards is simple: locate Sergio Busquets.

The Barça captain is easily one of the best passers in the world. His otherworldly distribution was at its peak yesterday, again thanks in large part to perfectly all his teammates were.

At this stage in the attack, the ball was generally in or around the centre of the pitch. This is where the positional superiorities were best created against Los Periquitos. One of Pablo Gavi or Frenkie De Jong would be positioned nearer the touchline, in such a way as to always be available as a passing option for the hosts.

The 17-year-old was of immense importance to his side. Often combining with the likes of Frenkie de Jong, Memphis Depay or Jordi Alba, he would either seek to transport the ball centrally or make a lacerating pass into a winger on his left flank. The goal of penetration was clear and obvious from Xavi’s interiors all throughout the match.

If this would not succeed, then they would attack Los Blanquiazules as Pep described it. By making a host of one-touch passes, Gavi, de Jong, and Alba created an overload and consistently drew out Espanyol players.

Once achieved, Busquets would again play a pivotal – no pun intended – role in the team’s ball distribution. Often positioned at the centre of the pitch, the onus was on him to now switch play to the other flank. In doing this, Espanyol were caught entirely off guard as too many players had by then been pulled out of place, and acres of space were nimbly created, just as Pep said.

The best way to accomplish switches, of course, is with the presence of permanent width all throughout the game.

Ilias Akchomach and Abde Ezzalzouli were instrumental in maintaining this balance in play. With the switches played towards them, chance creation occurred in one of two ways.

The winger would either play a cross into the penalty area into the corridor of uncertainty or better yet, with their snake hips, waltz through the rival backline and pass or take a shot at goal of their own. This was a reasonably recurrent pattern in offensive phases during the game, and Xavi hit the nail on the head with his offensive tactical approach.

Given their inexperience, the results were not the best they could have been. Nevertheless, this is the pair’s chance to learn and grow under the philosophy which tactically fits them like a glove.

The constant rotation of positions by the midfield cannot be understated, nor too the positioning of the centre-backs when the team needed to recycle possession. Everything that happened on the pitch happened for a reason.

With the likes of Pedri, Ansu Fati and perhaps Ousmane Dembele, and the most significant factor of all, in time, the level of football will certainly be taken a notch higher.

On the defensive side of things, Barcelona displayed their single best pressing game of the season. The PPDA (passes per defensive actions) that they allowed Espanyol was at a staggering 6.2. In this metric, the lower, the better, and Xavi’s proactive approach to the game paid dividends in the end.

As has always been recommended, Barcelona would apply an intense press from the highest line forward. The Blaugrana had Memphis Depay, Ilias, Gavi asphyxiate the rival backline to the best of their ability.

The Dutchman was in the form of his life with regards to his pressing game, as little could take away from his brilliance off the ball on Saturday night.

If the frontline was unsuccessful in their endeavours, then the interiors would join in. The goal was such that the Espanyol backline would find themselves at numerical and positional inferiority.

This would regularly lead to the visitors losing the ball cheaply and fairly close to their own box, increasing threat levels in the attack. Any failed pressure would be compensated for by the next line of defensive cover until the ball got to the goalkeeper, who himself barely had anything to do for three-quarters of the match.

Indeed it took 77 minutes for Los Blanquiazules to have any legitimate threat against Barcelona. This in itself speaks volumes about the effectiveness of Barcelona’s pressing on the night. The Catalans easily dispossessed their rivals at every given turn, and once the ball was won back, every individual without exception was well enough positioned to initiate yet another attack.

Another aspect of defending, not much spoken of, comes in what Barça do with the ball at their disposal. When attacking solutions are hard to come by, then the players commence a quick round of the oh-so-infamous tiki-taka. As long as the ball is at a good enough distance from the rivals, then there is little need to fear an attack.

This is where the selection of players benefited him most. Every individual on the pitch was complementary to his counterpart. Garcia and Pique may not be the most popular choices for the supporters, but popularity has never won matches.

Both individuals were phenomenal on the ball and off it too. Last ditch tackles, passes under pressure, and overall composure both in attack and defence were the hallmarks of their play last night.

Once the defensive phase was complete, there was no hesitation from whoever the ball possessor would be to initiate another attack. Espanyol were, after all, at their most vulnerable, and what better way to attack than with pace, precision and, for once in years, a visible structure in which to do so consistently?

Barcelona were not perfect, obviously. During certain phases in play, there were errors of communication. Nevertheless, one could not ask for a better managerial debut for Xavi.

From both a tactical and mental standpoint, there has been a visible boost in the team’s dynamics. Barcelona are now back to doing all the basics right. Many fundamental aspects in the team’s play that had been lacking for years are visible now in how the team sets itself up, both to attack and defend.

Even with all this said, this is only the beginning of a long story. Given all that has changed in just over two weeks of taking over, it is far from ludicrous to say that the best is yet to come.