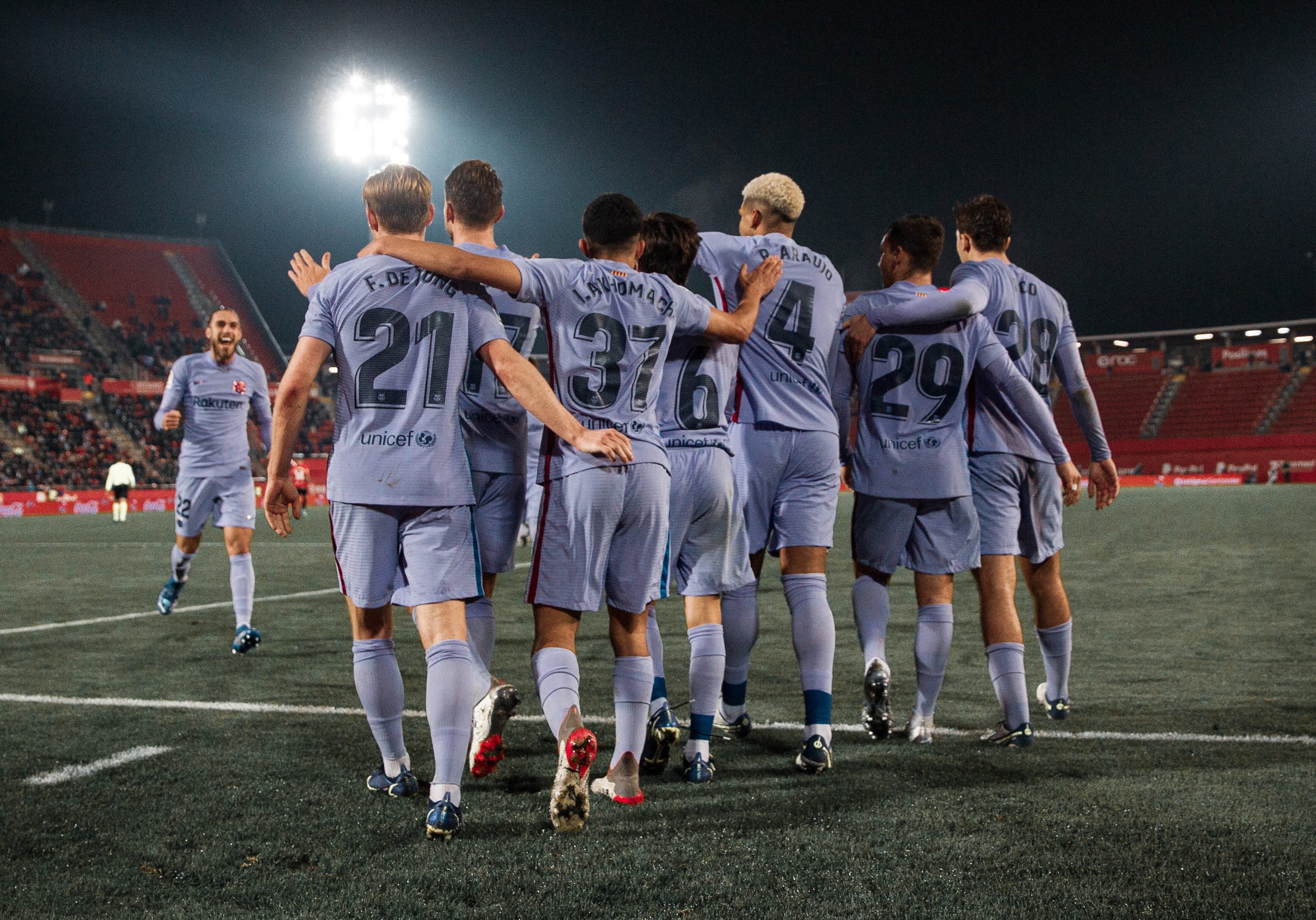 A depleted Barcelona side impressively held off Mallorca to register a crucial win in La Liga. The game at Son Moix ended in a 1-0 win for the Catalans in a situation where they had only 11 first team players available.

Though Mallorca flourished late in the game and threatened to pull back, Barcelona held on tight to get all three points. Ultimately, Luuk de Jong’s goal in the first half proved to be the decisive factor on the night.

With the three points picked up on Sunday, the Blaugranas now sit at fifth position in the league table. Moreover, they are just three points away from being in the top three.

Here are three talking points from Barcelona’s win over Mallorca.

1. The true show of character

With the severe scarcity of first-team players, one expected the team to struggle to cope. After all, that has been the story for Barcelona over the past few years — to crumble under pressure situations.

Yet, what Xavi’s side produced on Sunday was impressive, to say the least. Contrary to expectations, the Catalans put up one of their better performances. The first half, in particular, oozed with character and determination, something not often associated with Barcelona.

Xavi’s men dominated the first half not just in terms of possession but also in terms of chances created. The ball circulation and passing were on point as they moved from side to side without allowing Mallorca even a whiff of the ball. When not in possession, the team worked as a unit and pressed high to win the ball back in the opposition half.

Barcelona could have easily been 3-0 up in just the opening period-that was the extent of dominance they exerted over Mallorca at Son Moix. 13 shots, three big chances, two shots on the woodwork, ten shots inside the box and 65% possession — the statistics speak for themselves.

In the absence of Sergio Busquets, Pedri and Gavi, Barcelona needed a new presence on midfield to drive the department. Moreover, Nico and Frenkie de Jong’s deeper position on the pivot meant that the third member would need to play out of his skin to link with the attack. Riqui Puig did all of that and more on the night.

The youngster from Terrassa recorded a pass completion of 96%. Though he misplaced a few obvious passes, the high accuracy brings to light his efficiency. Moreover, he provided two key passes at Son Moix.

His vision was critical in creating the final pass leading to the winning goal. On a night when Barcelona needed a midfield hero, Puig stepped up and gave a statement.

Meanwhile, Luuk de Jong too delivered a performance to remember. The Dutchman has been at the receiving end of severe criticism since his move from Sevilla. However, he put it to the side and stepped up against Mallorca.

In the first half, the striker’s runs were perfectly timed, unlike his previous performances. He hit the woodwork twice and could have easily had a hat-trick at Son Moix. A powerful header late in the first half sealed the game for Barcelona and would be a big confidence boost ahead of his reported move away from Camp Nou.

3. A small, yet definite improvement in defence

In the final ten minutes, Mallorca overwhelmed the Barcelona defence by wave after wave of attacks. Luis Garcia’s side pressed hard to get an equaliser, and given Barcelona’s poor history at defending leads, one expected the team to concede.

Yet, despite missing out on the services of all their fullbacks, the team held on strong to deny them any chance of getting back into the game. Marc-Andre ter Stegen pulled off a save to remember as he blocked a point-blank shot in the dying minutes.

A special mention for Gerard Pique is warranted after the defensive masterclass he put up. The Spaniard made five clearances and blocked four shots against Mallorca. Additionally, he made two interceptions and won 11 duels. Alongside Eric Garcia, Oscar Mingueza and Ronald Araujo, Pique formed a resilient fortress.

The result was that Barcelona did not crumble under the immense pressure put by the hosts. The slim lead was sufficient to pull off all three points and hopefully was a beginning for great defensive displays to come.