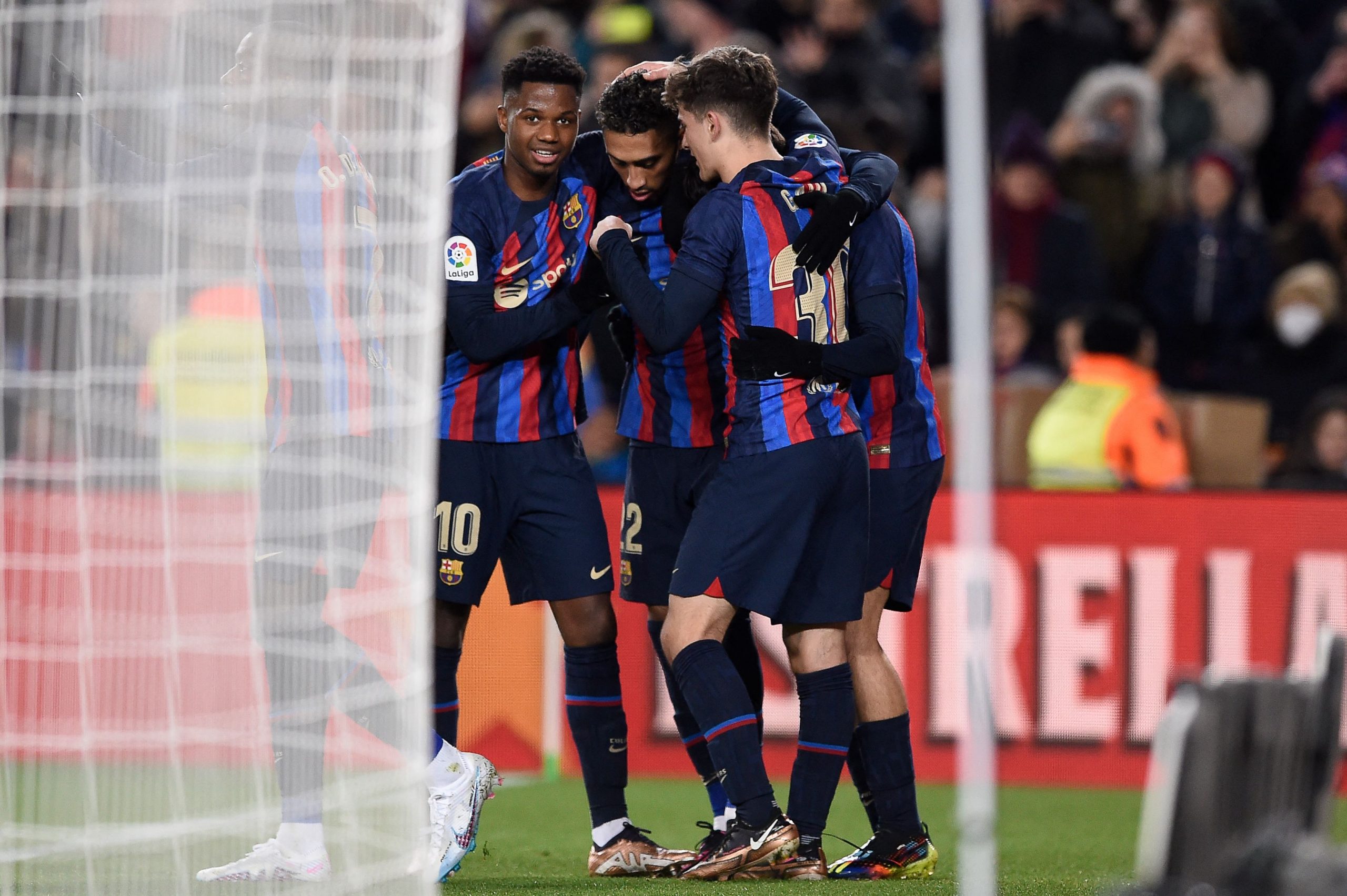 Barcelona were the overwhelming favourites against a struggling Getafe side when they hosted them at Spotify Camp Nou on Sunday evening. The La Liga leaders entered the game as one of Europe’s most in-form sides, but it soon became clear that they were not at their best.

The same side that bamboozled Real Madrid just a week ago began making rookie mistakes and failed to combine with their one-touch football. Yet, they took the lead through Pedri midway through the first half and were forced to hang onto it for the remaining hour.

Despite having a superior xG, Getafe had to settle for no points at Spotify Camp Nou. Meanwhile, Xavi’s men, who will next return to action in the Copa del Rey when they host Real Sociedad midweek, ensured that their lead at the top of the table remained intact.

Barça Universal brings you three talking points from the Catalans’ 1-0 victory over Getafe.

The name of FC Barcelona is traditionally, and even to this day, associated with eye-catching tiki-taka football where one side completely dominates the possession. It is not wrong, per se, as that continues to be Xavi’s primary aim as the manager of the club – to reinstate the forgotten art of possession-based football.

However, as the game evolves, it is inevitable for the team to stay regressive. Possessing a diversity of approaches to tackle an opposition is a repertoire of champions, and it is not surprising that Barcelona are adopting the same.

One would usually not associate a low-scoring defensive grind with the Catalans. But that was what unfolded on Sunday at Spotify Camp Nou.

With Robert Lewandowski suspended, the Catalans lacked the cutting edge in front of goal. Yet, Pedri did exceedingly well to give them the lead against Getafe in the 35th minute of the game.

From that point on, it was an uphill defensive battle for Xavi’s men as it was a few weeks ago against Atletico Madrid. For the second time in as many La Liga games, they managed to come out on top with good defensive grit.

Such low-scoring games when the side is not playing its best football is what sets great teams apart. The fact that Barcelona can conjure out wins even on such evenings is a reassuring sight for the manager and fans alike.

When Lewandowski’s suspension for three games was announced, the spotlight immediately shifted to Ansu Fati. The Spanish sensation was the most obvious replacement for the Pole, and after a difficult start to the season, finally had a chance to make his mark.

He struggled to make any sort of impact against Atletico Madrid with no shots in close to an hour of action. Yet, one gave him the benefit of doubt as he was still rusty.

Having scored a goal each in the games against Real Betis and AD Ceuta, it seemed certain that Fati was past his jitters and the match versus Getafe became a massive opportunity.

Yet, on Sunday night, Fati once again failed to get going. In 90 minutes, he had a cumulative xG of just 0.03 and had just one shot. His attempt in the dying minutes put his mentality and situation into perspective as he slammed the ball far into the stands despite having a clear view of the goal.

It appeared as if Fati did not wish to play as a centre-forward and felt out of place in the position as he drifted to the left whenever given the chance. While that is an issue for Xavi to address, it is clear that the youngster is far from taking the chances coming his way.

Barcelona boast an unreal defensive record this season, with just six goals conceded in 17 La Liga games. That becomes a notch more impressive when one considers that three of those goals came in the first Clasico of the season, implying that the Blaugranas have conceded just three goals in 16 games.

To have 13 clean sheets in 17 La Liga games is no mean feat. The defence, no doubt, deserved to be praised for the record. Yet, one just knows that Marc Andre ter Stegen’s form is the key driving force.

After a difficult couple of seasons, the German international has rediscovered his best form for the Catalans this term. His reflexes, positioning, and ball-handling have all been on point as he leads his team’s charge in the league.

Against Getafe, he was once again massive. He made three saves, all of which came from inside the box. However, plain statistics do not do justice to his incredible saves.

In the 41st minute, Pedri played an uncharacteristic loose pass that fell straight at the feet of Borja Mayoral. The former Real Madrid man was left with ter Stegen standing between him and the goal. However, the German stood strong and denied him with great anticipation, retaining Barcelona’s lead and saving the game.