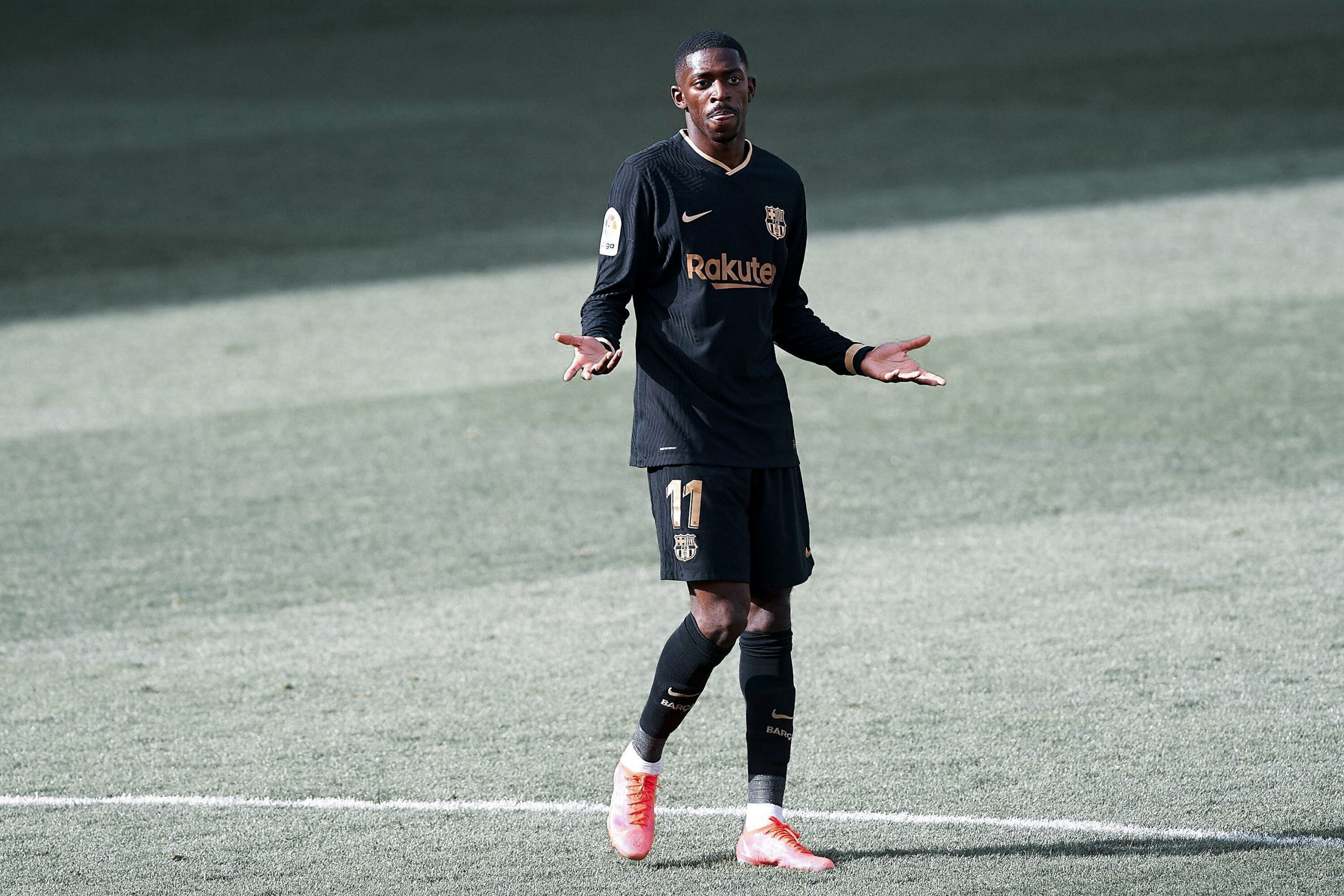 As Barcelona’s season comes to a close, there is once again pressure mounting on the Blaugranas with respect to the future of Ousmane Dembele. The Frenchman has been a bit of a problem child in Spain, with his price tag being the major point of discussion amongst Cúles.

While manager Ronald Koeman seemed to be fond of what Dembele brought to the table and wanted the Frenchman’s contract extended, evidently, there has been no agreement. As it stands, the versatile winger’s contract expires in 2022 – and therefore, this could be the correct time for the club to sell him and free up wages for potential new arrivals like Eric Garcia, Memphis Depay and Sergio Aguero.

Dembele came from Dortmund to Barcelona as a wonderkid, whilst burdening large expectations – but injury issues have limited him to a sum total of 73 starts in four seasons. Whenever he does play, though, he does not seem match sharp. While the former Dortmund man does bring a certain dynamic threat with him, that alone is not sufficient to cement a place in Barcelona’s playing eleven – considering they have talented players like Francisco Trincao and Alex Collado waiting on the sidelines who can bring the same dynamism with them.

That said, Dembele is still only 23, with a large career ahead of him. While Barcelona may have better options than the Frenchman, there are clubs who would love to have his services. With that in mind, we look at three such clubs that could prove to be a destination that could revive the flamboyant winger’s footballing fortunes.

There is no doubt that Arsenal are not the club they once were. While they did win the FA cup under new gaffer Mikel Arteta last season, this season has only been a never-ending downhill path, with the latest of the disappointments coming against Villarreal in the Europa League semifinals.

One of the major reasons for the London club’s disappointing performances across competitions has been a distinct lack of attacking threat. The Gooners made a strange signing in Willian – who has provided more or less nothing in terms of attacking threat, with his first league goal finally coming in May. It is, therefore, very much possible that a signing like Dembele could revitalize Mikel Arteta’s men to fight for Europe once more.

Under Mikel Arteta, Arsenal have looked to play in a 4-2-3-1 most often. While youngsters like Emile Smith-Rowe and Bukayo Saka have stepped up for them, the inexperience in the ranks shows often. There is also a certain lack of dynamism in the players who are currently at the club. This is where the quick-footed Dembele could step in and help Arsenal out.

Dembele is skilful and is great in one-vs-one situations. He poses more attacking threat than any of the wingers Arsenal currently possess, barring maybe the wonderkid Saka. Moreover, Arsenal already possess goal-scoring firepower in players like Pierre-Emerick Aubameyang and Alexandre Lacazette. The potential of this attack could be fully unlocked with the presence of someone dynamic and versatile like Dembele. The Frenchman is a definite upgrade over the likes of Willian and could very well become a key part of the Arsenal team – a win-win for both sides.

Andrea Pioli’s AC Milan have had quite a topsy-turvy season, which saw them lead Serie A for a better part of the 2020/21 before neighbours Inter Milan toppled them. Pioli has set Milan up in both a 4-3-3 and a 4-2-3-1, with Alexis Saelemaekers, Rafael Leao, Samu Castillejo, and Real Madrid loanee Brahim Diaz the major wing options in the squad. Combined, these players have added up 12 goals and 11 assists, which is a very meagre tally.

This very reason is why Pioli has often resorted to playing creative threat Hakan Calhanoglu and forward Ante Rebic on the left-wing often. This still leaves a hole in the right-wing, with Diaz, Castillejo, and, Saelemaekers giving a shot. It is safe to say finding a right-winger would be a priority for the Rossoneri – and someone like Dembele could just be the solution to their problems.

While Milan have a dearth of options at right-wing, they all either lack experience or just simply have not performed. It is why they should look towards a player like Dembele, who can provide the creative threat from the right. Even though Dembele is only 23, his early breakthrough with Rennes means he has tons of experience with him – something other youngsters like Jens Petter Hauge in the Rossoneri squad could learn from.

Dembele also presents an effective option as a left winger due to the Frenchman being able to use both his feet effectively. This means players like Calhanoglu could be deployed in their natural role where they are more effective. The Italian side who could very well be competing in the Champions League next season could do with this versatility. Safe to say, Dembele presents an interesting and dynamic option for the Rossoneri.

Milan look to be en-route their first Champions League qualification in nearly a decade, and will be ingested with additional funds through the same. Moreover, with some sales imminent in the summer, they could certainly be in the running for the winger.

The Europa league favourites are currently leading the race for Borussia Dortmund wonderkid Jadon Sancho. The Red Devils have lacked a prominent presence at the right-wing for years, which is why Ole Gunnar Solskjaer and his recruitment team have been after Sancho. The price demanded by Dortmund seems to be the barrier between the two clubs – and if this wall continues to stand, United would be forced to look at other options.

While youngster Mason Greenwood has performed well in that role, he still lacks experience. Putting the burden of large expectations on a 19-year-old could prove to be disastrous. Backup option Daniel James is used sparingly – while he provides a great option against teams who play high lines due to his pace, he simply lacks the dynamism and creative threat needed to break open defensive blocks – which is what United desperately need. Moreover, the first-choice right-back Aaron Wan-Bissaka, while a defensive stonewall, provides little help offensively.

This is where Dembele could prove to be vital to the side. He brings with him a creative threat as well as versatility – he could easily rotate on the left wing with Marcus Rashford as well. Dembele’s dribbling, pace and ability to take on defenders one versus one make him exactly the kind of player United are looking for. With key man Bruno Fernandes’ ability to spot a pass, Dembele could well and truly be able to realize his abilities off the ball as a scoring threat. All in all, this could be a great move for both parties.

Dembele was linked to Manchester United last summer, with a potential loan + buy move on the cards when they failed to sign Sancho. While the Frenchman refused to move in October, he may not have an option this time around, given the dire financial condition of the club.

What is clear is Dembele would not be short of suitors if push comes to shove for the 23-year-old. If put up for sale at an appropriate price, many clubs could do with the abilities of the Frenchman. Even post his injuries, Dembele continues to hold his key strengths, which were pace, dribbling, and an ability to take on and beat defenders repeatedly.

Thus, the dynamism the Frenchman brings to the table with these abilities is lacking in many clubs. Barcelona’s financial issues mean the sale of such a player could help. Moreover, it could help Barcelona inculcate youngsters like Collado and Trincao, who could prove to be key players if given an opportunity, not unlike Pedri. A move to a new club could also mean a change in fortunes for Dembele, who has many years ahead of him. The Frenchman is constantly under scrutiny with Barcelona. With less pressure on him, the Frenchman could very well realize his abilities and go on to become a key player for his new side.