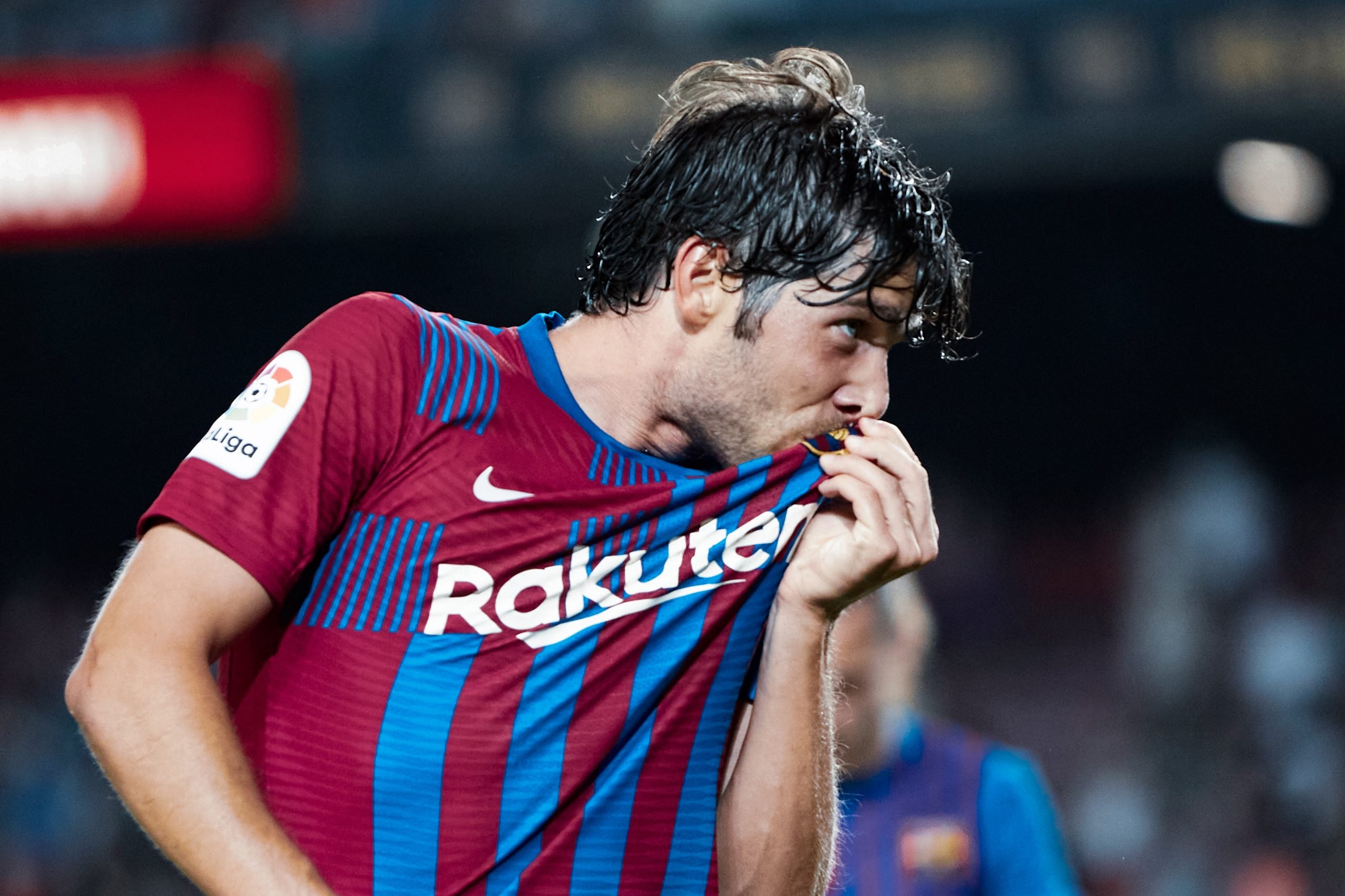 Throughout his lengthy stay in Barcelona, Sergi Roberto has been a polarizing figure whose worthiness of a place in the team has often been questioned. And frankly, his performances, especially in the past three seasons, gave little to no grounds for optimism. Understandably, his continuity for the 21/22 season was not met with much enthusiasm or high anticipations.

However, with the new campaign just underway, it is already fair to say that Roberto has undergone a significant transformation. Implemented in his beloved interior position, the Spaniard has not only looked far more compelling in every aspect but has also rewarded Ronald Koeman with 3 goal contributions to his name. Is this, therefore the beginning of a redemption season or just a temporary improvement?

Roberto’s path to first-team football was not a straightforward one. He never belonged to the category of generational midfielders. With exceptionally talented players like Thiago and Rafinha, among others, around him, it was easy for his development to be overlooked.

Yet Pep Guardiola acknowledged his substantial progress in the youth ranks and handed the Catalan teenager his first-team debut in November 2010. Step by step, he earned the faith of the legendary manager and his successors, albeit those leaps were still eclipsed by the magnificent Thiago.

The controversial departure of his young competitor was a blessing for Roberto, as it warranted a sizeable increase in minutes. But it was not until the 2015/16 season that he took up an important first-team spot. In his second year in charge, Luis Enrique revealed a crucial facet of the La Masia graduate’s game – versatility. The approaching departure of Dani Alves prompted the coach into improvisation, and he came up with an unconventional yet brilliant solution.

At the epicentre of his inspiration was none other than Sergi Roberto, who Lucho decided to deploy as a make-shift right-back. Initially, there were doubts over whether that would benefit the Catalan or further restrict him, but those would very soon disappear. That season, Roberto was already gradually being zoned into the demands of his future role and would eventually establish himself as the first-choice RB come Alves’ exit.

It was an unorthodox choice, but one that made total sense. One of the main traits of the number 20 is his ball-carrying capacity and his ability to detect any open space within a split second. His accuracy, especially during crosses, is also quite enviable, while his positional soundness as a midfielder helps in possession.

Roberto’s main weaknesses are perhaps his reluctance to pull off the decisive pass and lack of sharpness in motion, and not getting tight enough to his man in 1v1 situations. By converting him into a fullback, Enrique essentially exploited his strengths and camouflaged his flaws.

Roberto was given the freedom to operate in the most favourable areas without exposing his deficiencies.

The creation of this advantageous environment unleashed the player and benefited Barça, too, as Sergi played a major role in the realization of two of the most iconic goals in the club’s recent history – scoring the decisive sixth goal of the renowned ‘la Remontada’ against PSG and initiating a last-gasp counter-attack that resulted in a dramatic late winner against Real Madrid with a sensational run.

A rapid and agonizing downfall

2017/18 brought about what turned out to be a disastrous managerial change that saw Ernesto Valverde replace Luis Enrique in the dugout. Although a decent coach, Valverde did not possess the minerals for success at the Camp Nou, for his pragmatic approach, tactical inflexibility as well as his inability to maintain the dressing room in control. It was a decision that preceded grave repercussions for Barcelona.

The two and a half years that ensued were full of immeasurable disappointment and humiliation. The club was in a calamitous state, mostly institutionally but also in the sporting aspect. The terrible results were instigated by a lack of leadership from the board, but also appalling collective and man-management. The implications were endured by the vast majority of the entity, and Sergi Roberto proved one of the primary losers of the situation.

Valverde’s approach was restrictive and severely held back Roberto. The 29-year-old tends to operate based on his intelligence and situational judgment, yet the manager’s ideas gave little room for creativity of thought.

As it transpired, the rigid 4-4-2 formation that the former Athletic Bilbao coach used was also a constraint for the Catalan. And to make matters worse, Valverde prioritized physical combat over positional excellence, often making the equally unconvincing Nelson Semedo first-choice.

Sergi Roberto had a horrid time under the Basque manager. It wasn’t a temporary dip in form; he was simply not the same anymore. Even under Quique Sétien and Ronald Koeman, he never managed to recover anything near his best form. Decent outings alternated with even greater failures. In short, his highs were long forgotten while his lows became even lower with each passing day.

A muscular tear sustained against Atlético Madrid in November 2020 seemed like the nail in the coffin for Roberto’s Barça career, as it deprived him of his highly-praised explosiveness. A departure was on the cards for the summer, yet his versatility and experience were once again his saving grace and the determinant factors that eventually prolonged his stint at the club.

Football is a game where one can go from zero to hero and vice versa in a matter of moments. The reactionary nature of a fan of the game means any costly error can be forgiven, just like any mistake can overshadow a spell of consistent and convincing performances.

At the pace that he has set, Sergi Roberto’s recent misfortunes could soon be pardoned, because 2021/22 has, thus far, been a massive leap in the right direction for the 29-year-old. Back in midfield, but in a box-to-box role rather than as a classic number 8, he has enjoyed a marvellous opening three games, scoring on two occasions and assisting once, too.

But his contribution stretches far beyond goals and assists. Roberto is not particularly involved in the build-up phase; his impact is amplified in the middle and final thirds, where his tirelessness and determination are so vital. Crucially, the versatile Catalan provides depth with his darting and perfectly timed runs into space. When in the box, he has been remarkably ruthless, which is not something that could be said about any previous version of him.

For Ronald Koeman’s ideology, Roberto is the ideal substitute midfielder. Considering the way the second half often goes for Barça, his energy and decisiveness are perhaps of greater service than anything else. From his arrivals into dangerous zones to his inhumane work rate in defence, the return to his natural position has initiated an extraordinary in-game metamorphosis.

Undeniably, the number 20 is no de Jong or Pedri – their technical gift, press resistance and faultless passing are unique and impossible to be replicated. Nevertheless, there is an air of conviction around this Sergi Roberto, and Barcelona are fortunate to be reaping the harvest of the one-eighty in his fortunes.

Slowly but surely, Sergi Roberto is regaining the confidence of the Barça supporters that once doubted him. From being the most unwanted man in Catalonia, he is now firmly among the team’s most important assets. Whether he will stay beyond this season is unknown and thoroughly depends on his view on a contract extension with a significant wage cut and his performances further down the line. What is certain is that Barcelona will have to capitalize on his miraculous comeback no matter how long he decides to stay.