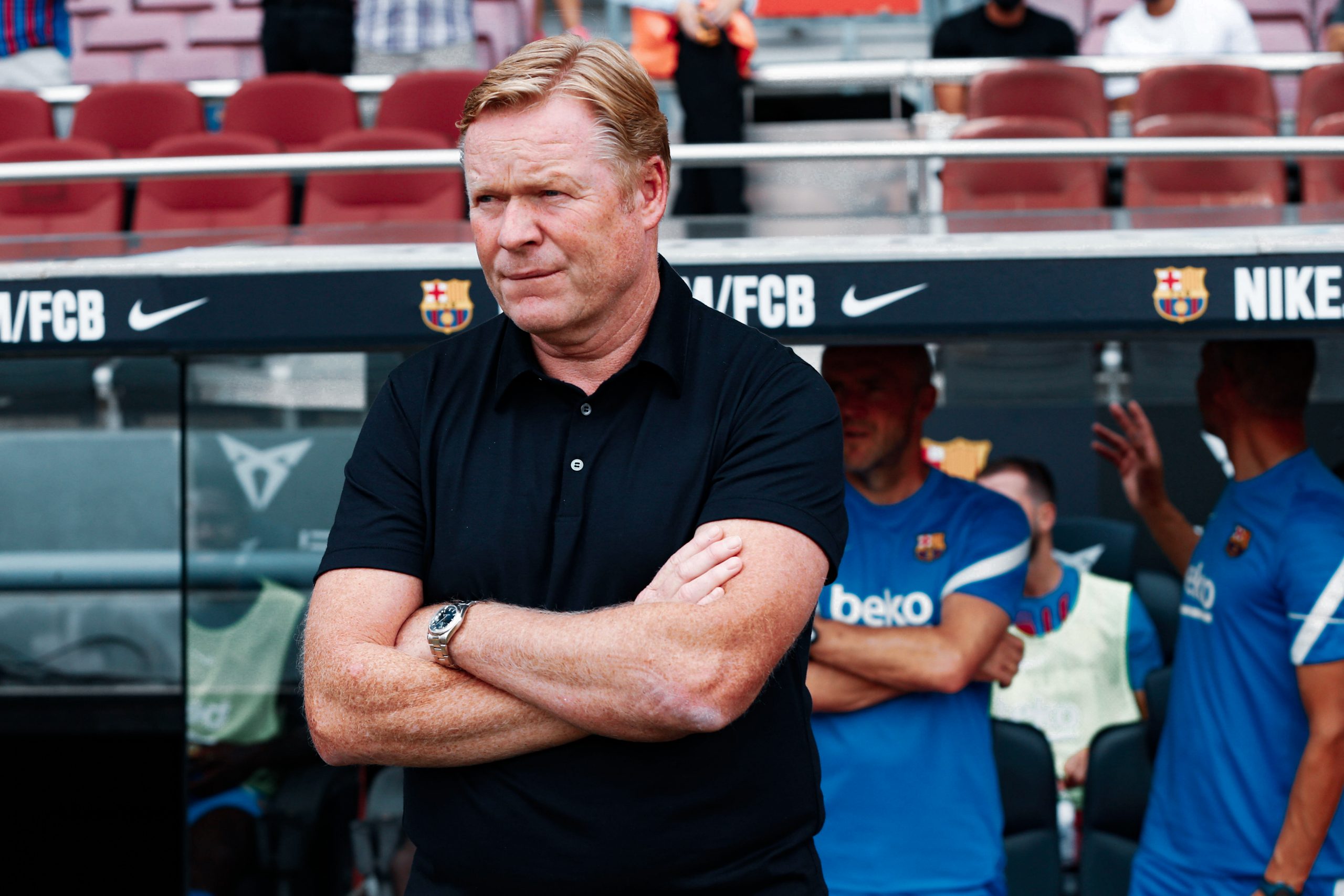 “I would have liked [Ronald] Koeman to tell me to my face, you’re not for me. Face-to-face didn’t exist and I don’t understand it. It’s complicated because it is the first time that it has happened to me and I have seen such behavior.”

Following his loan move to Besiktas, Miralem Pjanic spoke out against Koeman and his relationship with the manager while at Barcelona. The news was eye-opening yet expected and added to the laundry list of fractured relationships the Dutchman has had with various players throughout his managerial career. Riqui Puig, Matheus Fernandes, and plenty of examples from past-managed clubs all come to mind.

We all know what a teacher’s pet is – someone who is incredibly loved and favoured regardless of whether they deserve it or not. It’s common everywhere, from schools to the workplace. But, what about the opposite? How often have we heard about cases where people aren’t given chances regardless of how much they would deserve it?

In the following article, Barça Universal will explore Koeman’s rigidity regarding particular players and how that negatively affects on-the-pitch results. Rather than be a subjective critique on Koeman’s character, this will examine past and present examples and come to a conclusion on how all parties can move forward positively.

While Miralem Pjanic and Riqui Puig immediately come to mind, there are similar cases found in Koeman’s past teams.

In 2007-2008, Koeman was the manager of Spanish side Valencia. Although he led them to the Copa del Rey title, the club hovered near the relegation zone for much of the campaign.

That season, he had an infamous conflict with Joaquin, wherein the two would consistently clash, resulting in the Spanish midfielder being pushed out of the starting eleven – and the squad as a whole. To this day, Joaquin has the following to say about their relationship, “I wouldn’t appoint Koeman as kitman!”

Former-Everton striker Oumar Niasse has also come out in opposition to Koeman, as the striker was reportedly mistreated in 2016-17.

Flashforward to Barcelona in 2021, and the same issues persist.

In the Catalan capital, the most damning example is Riqui Puig, the starlet who impressed Culés in 2019-20 with his energy, line-breaking passes, and ability to create “something out of nothing.” After an impressive (half) season, even starting key La Liga matches down the stretch, he quickly fell out of favour with Koeman, for reasons still entirely unknown.

Throughout the 2020-21 season, Puig totalled 598 minutes, only seven more than Ansu Fati, who missed nearly seven months due to injury. Additionally, the Spaniard would not feature in games where the team desperately needed a bolt of energy or if midfielders were underperforming and clearly gassed.

This season, Riqui had an impressive pre-season, but that failed to muster any support as he’s played zero minutes this campaign. His situation doesn’t look like changing any time soon. In fact, Puig now looks to be behind the pecking order of not only Frenkie De Jong, Pedri, and Sergio Busquets, but Sergi Roberto, Nico Gonzalez, and the 17-year old Gavi too.

Puig is not starter quality yet but has so much more to offer the team. More importantly, the reasons for not playing him remain curiously unclear. If he was clearly a level below Barcelona’s standards or completely disrupted the team every time he played, then there would be no issue at hand.

Similarly, Miralem Pjanic ran into the same problems. The Bosnian midfielder arrived in the summer of 2020 in an admittedly strange swap deal with Arthur Melo, but he was still expected to be a key squad member, whether off the bench or as a rotation piece. His first few starts with the Blaugrana were sub-par, although not enough to be completely kicked out of the picture.

In the 2020/21 season, Pjanic totalled 1302 minutes, 30 total matches played, and an average of 43 minutes per game – less than half a game. Once again, his performances were never out-of-this-world, just not egregious enough to not deserve more playing time.

And how can we forget Francisco Trincao, who was (and is) an admittedly raw, unpolished talent. After a promising run of games in February, the Portuguese winger stumbled and rarely saw the pitch again.

However, for a team lacking wingers, the Portuguese probably should have made more appearances.

Speaking of talented young wingers, Alex Collado has found himself in the same situation. The ex-Barca B captain was set to be promoted to the first team for this season, but he was left out of the official squad registration and not given chances to prove himself.

Elsewhere, Matheus Fernandes comes to mind. The Brazilian was another perplexing transfer, only featuring once (for 18 minutes), where he, in fact, was quite decent.

Upon leaving the club a few months ago, more information was revealed about his relationship with Koeman. Fernandes said, “I think Koeman has some personal problem against me.”

He added, “A month after my debut against Dynamo and not having played after, I went to Koeman’s office and asked ‘Did I play badly?’. He replied: ‘No, you played well, but I can’t give you chances. I don’t count on you. You don’t have the quality to play for Barça.”

Still, Koeman is not entirely to blame for this fractured relationship, as the club as a whole failed to introduce, integrate, or utilize Fernandes properly.

Much ado about nothing?

When examining this potential issue, it’s also important to address the most compelling counter-argument: namely, that no manager – or person – gets along with everyone.

A common example comes in the form of Pep Guardiola and his notorious differences with Samuel Eto’o, Zlatan Ibrahimovic, and Yaya Toure. That prompts the question, “If one of the greatest managers of all time has some fractured player relationships, why can’t Koeman?”

While a solid point, the difference comes in the sheer number of cases and the fact that Guardiola’s teams could still function at an elite level without those players. With Koeman, utilizing more of Puig, Pjanic, and Trincao would have benefitted the team in the long run, as Barcelona’s squad is relatively thin and, frankly, lacks quality.

Additionally, the problem is that the reasons for these players’ lack of playing time is shrouded in mystery. If not for lack of skill, effort, or talent, what is it? As this question will realistically never be answered, one can only hope for less rigidity because its repercussions are drastic.

Why is this such a problem? The answer, as briefly mentioned, is that this sheer reluctance to play certain players will negatively impact performances on the pitch.

In terms of Puig, the 22-year old could have been a crucial spark off the bench or against low-block opposition where his creativity could be maximized and risk-taking minimized. This was especially the case during the end of the when Pedri looked evidently overworked.

For Pjanic, he could have featured more as an interior or as a central defensive midfielder in the 3-5-2. With more defensive cover, the Bosnian could have thrived, picking out long balls and controlling the pace and tempo of the game.

Sergio Busquets benefitted due to the same reasons in the same formation, with minimal defensive duties, and it’s only fair to assume that the Bosnian could have, as well.

Last season, Trincao should have been given more time and patience to grow, while Collado potentially going from Barca B captain to without a club is a travesty, to say the least.

These issues — both rigidity and miscommunication — can also stagnate player progression. Unclear squad roles and on-and-off-again appearances prevent players from gaining meaningful experience and the chance to improve consistently. However, at a club like Barcelona, patience admittedly runs thin. If one fails to impress in their first showing, a second chance rarely comes, but that is far from a justification.

In the bigger picture, this coincides with Koeman’s shortcomings in terms of rotation, wherein a select group of players are relied on week-in and week-out, culminating in a lack of focus throughout a 90-minute match or burnout at the end of the season. To add, this dangerous habit prevents the development of a sustainable and healthy team structure.

The truth is, in addition to all the players explored in this piece, names like Luis Suarez and Junior Firpo come to mind too. Reports state that even President Laporta stepped in and asked for more minutes for Puig and often-sidelined Samuel Umtiti.

At this point, the evidence is overwhelming, and hopefully, Koeman can mend current and future relationships in order to bolster the squad as a whole and improve the team’s on-the-pitch results.

All that culés ask is that (all) players are given ample time and sufficient opportunities to prove themselves. Then, let the performances take us from there.