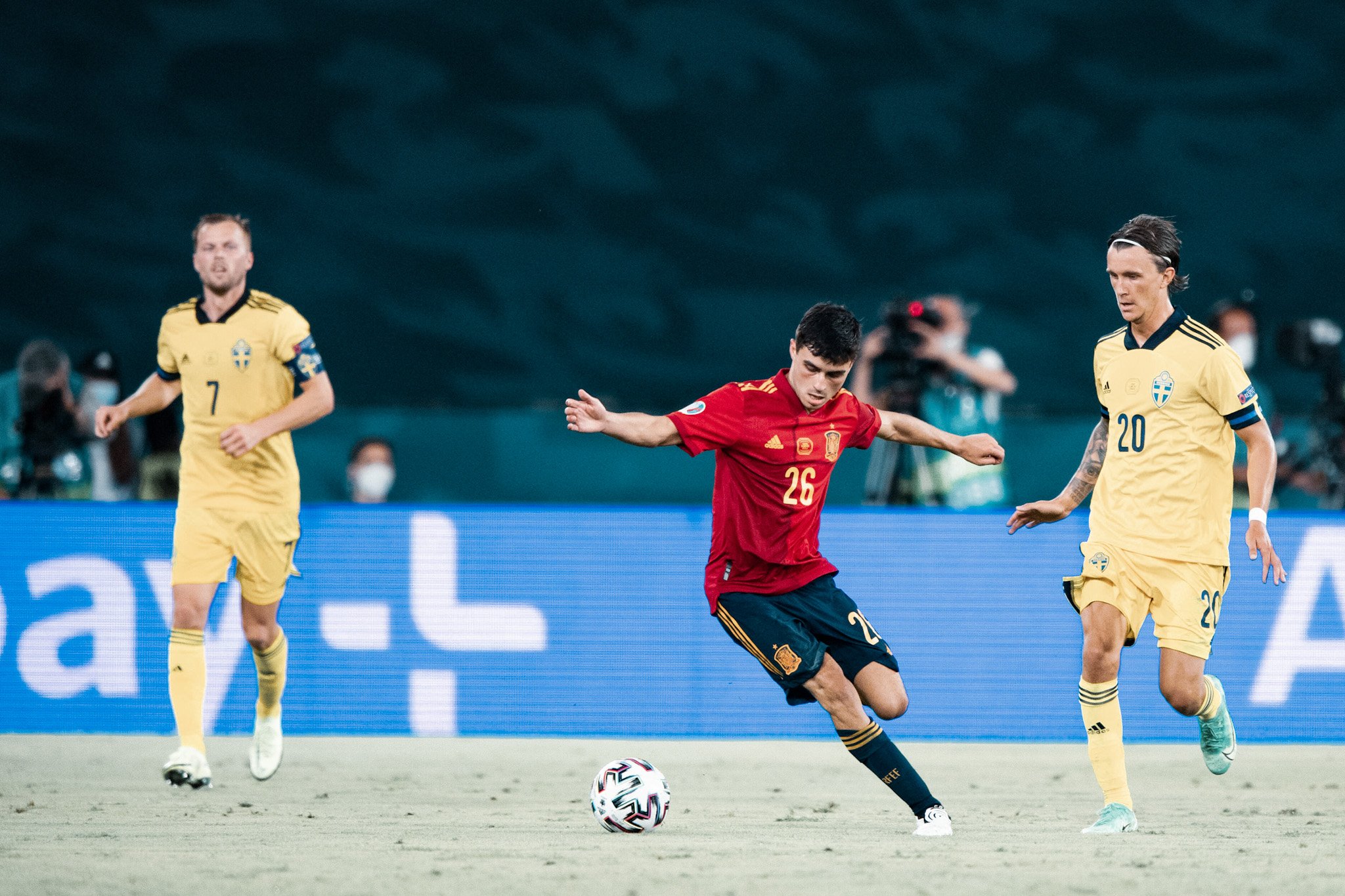 Pedri Gonzalez Lopez of the Canary Islands, few players have had more of a meteoric rise than him in European football history. Almost 3000 minutes played for Barcelona, five appearances for Spain’s national team, second-youngest player to reach 50 appearances for Barcelona, amongst the best for through balls, pressures, progressive passes among other statistics this season.

That’s just the tip of the iceberg when speaking of Pedri’s achievements. Yesterday against Sweden, the 18-year-old broke yet another record. Under Luis Enrique, Pedri became the youngest Spanish player to appear in a major tournament in their entire history, something he was naturally delighted about.

The Estadio de la Cartuja in Seville witnessed a 0-0 draw between Luis Enrique’s Spain and Jan Andersson’s Sweden yesterday. This was a match where the Swedes came out happier of the two, as apparent from their gameplan. They lined up in a 4-4-2 deep block, aiming to absorb Spain’s superior attacking power. The knee injury against Juventus left their talisman Zlatan Ibrahimovic unable to participate in the Euros. This meant Alexander Isaak was the focal point of the attack.

For Spain, the 4-3-3 was a highly attacking one. As expected, the full-backs would advance up the field regularly, while the wingers supported the striker and interior midfielders with tireless runs with and without the ball. Pedri was deployed as the left-interior midfielder. This is where his talents shine the most, and Lucho is very aware of this. Pedri regularly receives on the half-turn, progresses the ball either through passing or driving forwards himself. Constantly putting the opposition on edge, to put it simply, he makes things happen for Spain.

Pedri’s Barcelona teammate and Spain’s captain in the absence of Sergio Busquets, Jordi Alba, was the left-back. Dani Olmo, an ex-La Masia player himself, was the left-winger. These three combined exceptionally well together. As seen from the image below, their positioning was such that all three players were quite close to each other zonally.

This is because the positioning is their average position. Taking a look at individual heatmaps, we can further observe the fluid rotations seen yesterday. This is essential as it provides context to Pedri’s stellar performance and why he will be crucial for Spain at this tournament.

Dani Olmo, though the winger on paper, would often swap positions with Pedri if it suited the ball circulation. Jordi Alba would be seen underlapping Pedri at times, again, to help in ball-circulation. The Spain captain would also overlap down the left, all of which combined into a constantly moving triangle between the three, which Sweden didn’t really find an answer for throughout the match.

Pedri was crucial not only to this combination but also to Spain’s overall system of positional play. To contribute to the build-up, he would do either of two things often. Firstly, he tried to find space behind the lines. His awareness and quick turns allow him to play under pressure and drive the ball forward. If the passing lanes were cut off, he would drop to the bottom of midfield from where he becomes a clear passing option. Another example of why he became a staple for Koeman in Barcelona’s midfield.

Pedri’s decision making was functioning at the highest level yesterday. He would know exactly when to play the ball laterally, when to play it over the defense, when to let the ball run along with himself, and when to bring it under control. His passing was top-notch, proven by his accuracy of 92.4% among the 105 attempted passes. Along with this, eight out of nine attempted long balls reached their target. He covered a lot of ground, hesitating to slow down even after 90 long minutes were played.

The game of this Barcelona midfielder is not about getting goal contributions for himself, though he has gathered a few this season. Pedri is the kind of player that the team turns to when things aren’t going right and one who is amongst the reasons when things are going right. This was apparent yesterday, as 44% of Spain’s attacks were down the left. Whenever Spain were failing to get through the Swedish low-block, the ball would reach Pedri, and a few seconds later, they would be having a go at goal.

When things were going right, he showed he was amongst the reasons why by sustaining attacking play. The 18-year-old’s defensive abilities are often overlooked. He looked to stop the attacks before they even began, leading to Spain’s third having only 14% of the action zones.

Pedri Gonzalez has gone from playing in the second division of Spanish football to being absolutely irreplaceable for Barcelona and Spain in a year. His rise has been through merit and merit alone. His talent is tremendous, his personality and spirit unwavering. His coaches know this, trust him for this, and he repays their faith many times over. In Pedri Gonzalez, there is no longer a player for the future, but a player for now.