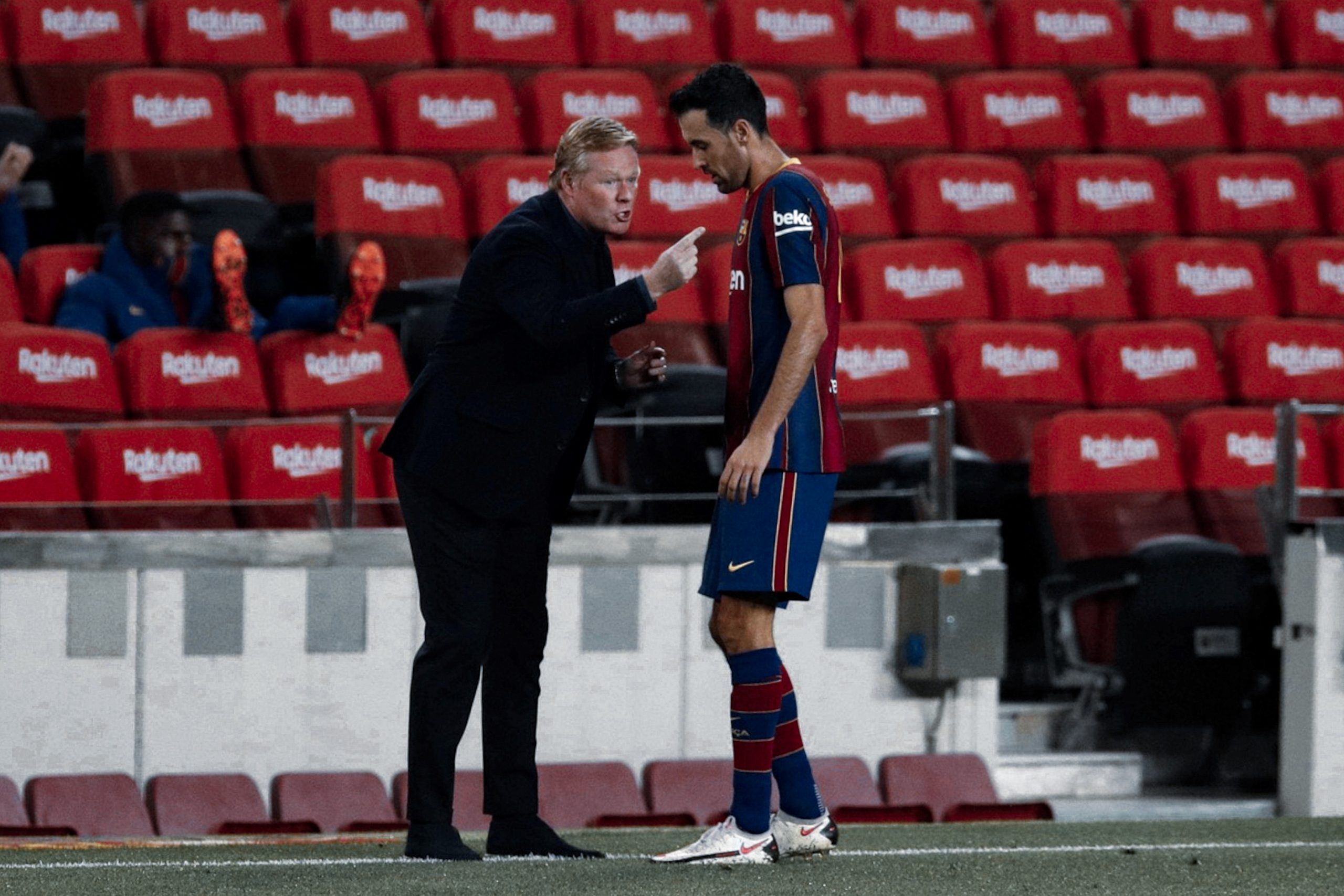 In a season with many ups and downs for Barcelona, Ronald Koeman’s midfield selection was probably the only constant.

After Christmas, once matchday came around, there was no guessing or debating others’ inclusion; everyone knew who would appear on the team sheet an hour before kick-off. The opposition or the schedule did not matter. Sergio Busquets, Frenkie De Jong and Pedri were bound to be listed as the midfield trio, week in week out.

Going into the season, Koeman planned to use Busquets and de Jong in a double pivot with Philippe Coutinho in front like a classic 10, perhaps in a bid to finally rectify his gross mismanagement. After the Brazilian picked up an injury, Koeman decided to revert to a midfield trident. This consistency benefitted Barça greatly throughout their unbeaten run of 19 games in La Liga but come the run in for the title, the wheels on this reliable vehicle began to fall off.

The shunning of Riqui Puig and new signing Miralem Pjanić began coming into question, or did Barcelona possibly miss Coutinho? Was this Koeman’s fault for asking too much of them? All these questions are relevant, but it is Koeman who should take most of the slack.

It is hard to criticise the midfield of Barcelona when they were the only line that consistently contributed to their cause this season. Koeman’s mismanagement became apparent towards the end of the season, and unfortunately, the midfield was just another area that fell victim to the absence of adaptability on the Dutchman’s end.

Going into December, Barcelona’s season was beginning to look like a horror show. After a defeat to Cadiz, the Catalans sat in 7th place, and a sizeable 12-point gap emerged between them and league leaders Atletico Madrid. The 2020-21 season saw Barcelona’s worst start to a campaign in 32 years, and Ronald Koeman’s continuity was already in question.

The Dutchman began to look for solutions, and with Philippe Coutinho’s early season form dwindling, before eventually getting injured. Koeman then turned to Pedri to fill the void beside the dependable Frenkie De Jong and Sergio Busquets. From the 13th of December to the 5th of April, Barcelona went on 19 games unbeaten in La Liga, with the midfield trio present throughout each of them.

The consistency in midfield led to the whole team blossoming as everyone began to know their roles and positions on the pitch. Certain patterns of play became more frequent, and the forward players began to benefit from the through balls of Busquets, the runs of de Jong and the link-up play from Pedri high up the pitch – with Lionel Messi’s relationship with Pedri becoming apparent.

This run found the Blaugrana back in the title race, but whilst that run positively affected their position on the table, it also affected the bodies of some players. Throughout the most important part of the season, the lack of rotation became apparent to everyone, especially in midfield. Barcelona won only four of their last nine games and conceded the title race to both Madrid clubs.

The midfield looked exhausted, the press was weak and bypassed easily, resulting in opponents’ transition with ease, and their protection of the backline was subsequently affected. Up top, the trio contributed very little, accumulating more cards than goal contributions in the last nine games. Koeman had run them into the ground and with that went Barça’s chance of winning La Liga.

The frustrating thing for the Catalan faithful was that this could have been prevented. Although the injury to Coutinho was a blow and understandable, what was not was the shunning of both Riqui Puig and Miralem Pjanic.

A photo emerged before Barcelona’s penalty shootout with Real Sociedad in the semi-final of the Supercopa de Espana that sums up Ronald Koeman’s relationship with Riqui Puig. What appears as Puig volunteering to take a penalty is met with a look of ‘who are you?’ by the manager.

The Dutchman’s shunning of the young La Masia graduate has come as a surprise to many. Puig’s emergence onto the first-team scene was one of the few bright sparks from a disastrous 2019-20 season. Many Barça fans hoped to see the best of the midfielder this season, but for whatever reason, the new manager took a disliking to the young Spaniard, and so an agenda began.

What makes Puig special is his unpredictability. The youngster plays a modern game but tucks his shirt inside his shorts like an old veteran, and that sort of sums the 21-year-old up. The midfielder is very good at progressing the ball, has incredible awareness and stylishly glides past his opponents. Still, it was the aforementioned unpredictability that was missed the most during the season.

Many times, this season watching Barcelona has been like watching a scene from a movie stuck on repeat. Teams who play with a low block were aware of this and were happy to sit back and watch the Catalan side pass from side to side for the full 90 minutes, hoping that Lionel Messi would not do anything outrageous — the game against Cadiz being a prime example.

Although Pedri has been wonderful this season, games such as Cadiz or the shock Granada defeat could have done with Puig thrown into the mix, constantly making opponents think with his ability to take the ball and run with it. At the very least, it would have freed up more space for Messi or Antoine Griezmann to take advantage of, and in hindsight, was a chance missed by Koeman.

Although there was not as much uproar over his omission, the same can be applied to Miralem Pjanic. A signing that was made for all the wrong reasons was treated as such by Koeman. Apart from Philippe Coutinho, Pjanic has a handy ability that the main trio and rest of the midfield cast lack – the ability to shoot from distance.

How many times as fans have we seen the big teams in world football turn in subpar performances, but that one hit-and-hope strike seals victory? How many draws or defeats could the former Juventus man have salvaged with this ability? It is a question that will remain unknown for now but must be considered when looking back on his season.

Puig and Pjanic played a combined 900 minutes in La Liga this season, not even half of what 18-year-old Pedri racked up. Pedri was no doubt deserving of his spot in the first XI this season. Still, the overuse of a kid who had not experienced the intensity of a La Liga team’s schedule before had a big impact on the side towards the end of the season, especially when the experienced two beside him were feeling the strain too, inevitably leading to a collapse.

This failure must be placed on the doorstep of Koeman, as it was lazy management on his part. Riqui and Pjanic had the ability to take some of the load of the regular midfield choices’ shoulders — especially in games against lower quality opposition, allowing Pedri to be fresh for when it mattered most. The lack of rotation will, therefore, be another major cross against the Dutch coach’s name.