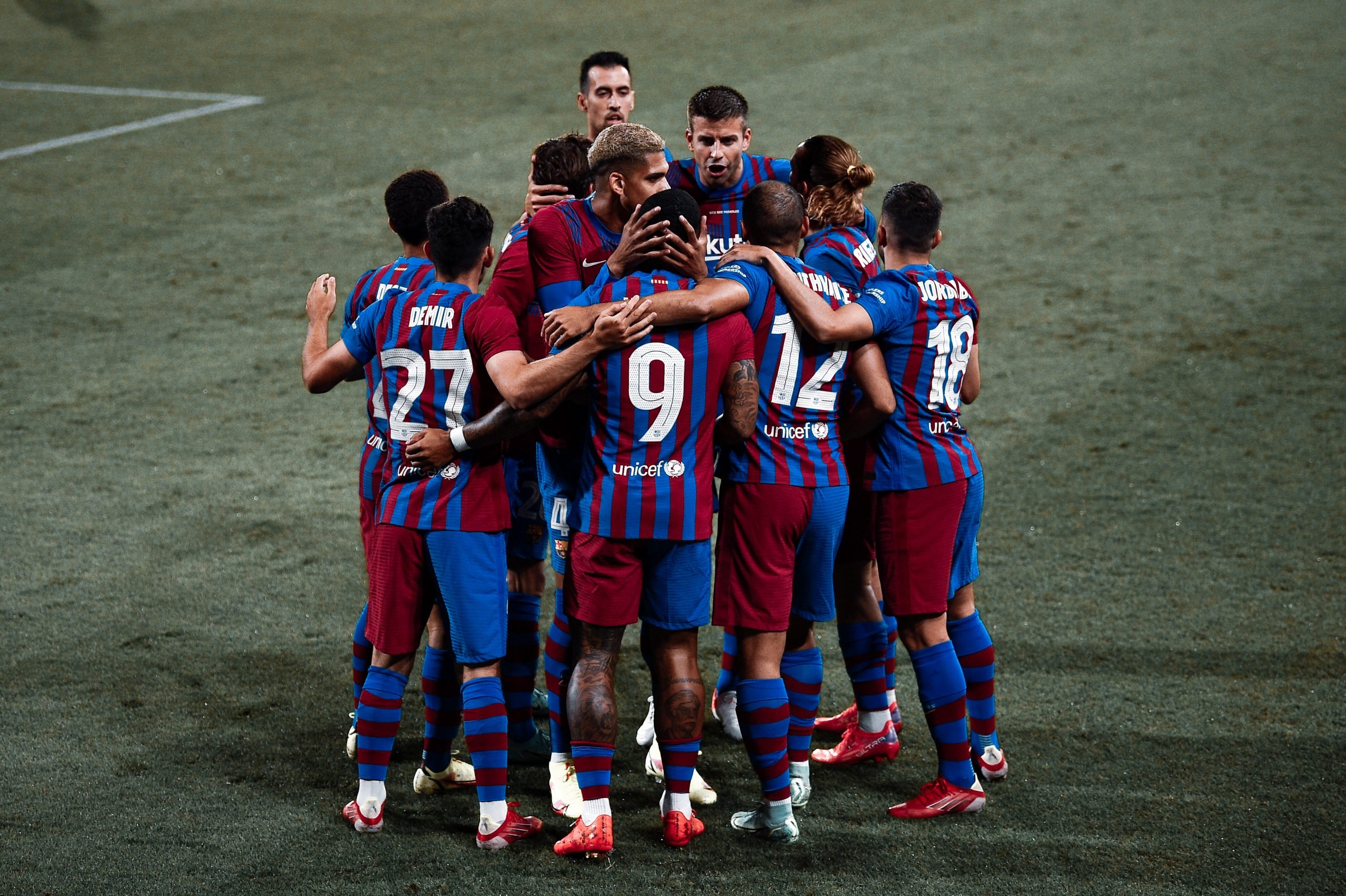 “Barca is one of the best teams in the world, it’s got an amazing line-up. More players will come, not just now, but in the future and players come and go in the end. Like Laporta said, the club is more important than any one person. People will get used to it. At first, it will be weird…but like I said, there are really good players, they got a great squad, and in the end, it will be easy for them.”

An admirable answer from the ever-gracious Lionel Messi when asked what Barcelona will look like without him during Sunday’s rather emotional press conference.

It is an answer with a lot of truths within it: more players will come and go, the club is bigger than any one individual, people will start to get used to life post-Messi, there are excellent players available for the upcoming season, but the outlier is it certainly won’t be easy for Cules.

It won’t be easy because without Messi, the team loses its captain, its chief creator, its top goal scorer, and its get out of jail free card.

It is a role no single individual within this squad can replicate or even outside of the squad, to be frank. It is a massive star-shaped hole that can only be filled with collective effort, and despite all the pessimism, a close look at this squad shows it can be done.

Shaping Barça without Lionel Messi is a task Ronald Koeman did not expect to face this season, but now it has arrived on his doorstep and is ultimately the biggest test of his career.

Joan Laporta wanted to revive the great La Masia and needed a coach who is willing to give the youngsters a chance. Now the president has his opportunity, now is the time to build the foundations, and now the new era of Barca begins.

Although Ronald Koeman has his flaws, the Dutchman has the skill of making use of a host of different formations, which became prevalent last season. Throughout this post-Messi era, trial and error should be expected in finding solutions to filling Messi’s role but come the opening day, it is expected that Barcelona will line up in a 4-3-3.

The Joan Gamper match suggests the front three could be Martin Braithwaite upfront, with Antoine Griezmann on the right and Memphis Depay on the left (pending registration). Should Joan Laporta fail to reduce Barca’s wage bill, the left could be occupied by either Griezmann or Braithwaite with Yusuf Demir on the right, after the Austrian’s impressive pre-season.

In this set-up, Koeman should seek fluidity with his strongest front three. All three have the ability and intelligence to play in each other’s positions, and constant rotations confuse defenders and stop the focus on any one individual. This system also allows for greater expression, and without Messi, there should be no shackles on this element of the Catalan side’s attacking game.

A post-Messi Barca team leaves the central zones unoccupied, which allows Griezmann and Depay the freedom to drop into this space on the pitch like they did pre-Barça. A fluid system would allow both to interchange, with Griezmann making runs when Depay drops deeper and Depay heading towards goal once the Frenchman cuts inside.

The return of Ansu Fati enhances this further, thanks to the youngster’s incredible speed. It is a trait this Barcelona side currently lacks, and the young Spaniard’s runs from the outside in will cause a lot of problems for opposition defenders.

There is also a greater emphasis on the fullbacks in this system, as both Jordi Alba and Sergino Dest will be required to stretch the defence once the wingers venture inside, which creates more space for the wingers to operate in.

Alba’s contribution to Barca’s attack is unquestionable, but Dest’s output will have to increase this season, as it is evident in sides such as Chelsea, Liverpool, and Manchester City that the fullbacks have a big role to play in the patterns of a fluid system.

Using Joao Cancelo as the benchmark after the Portuguese internationals impressive Premier League campaign last season — Dest’s contribution was short by two assists, ten key passes, and 2.6 expected assists. This simply must change, or else Emerson, whose stats are slightly better, will be taking over.

This system seems the easiest to implement at post-Messi Barça, as the Dutchman has the players with the correct attributes to apply it. It supports a collective effort due to the ease in which the team can press in a 4-3-3, the front three are close together for rotations, and the wide areas are free for the fullbacks to join the attack, whilst also having a pivot to protect the two centre-backs.

Last season provided plenty of data with regards to formations as Koeman used four in total, which will save time on the implementation process of one of these systems throughout this season should the Dutchman decide to change.

As mentioned before, there will be a lot of trial and error this season due to the sheer amount of goal contributions this team has just lost; some players will rise to the occasion and others might not, but just like Messi said, there are outstanding players in this squad, and it is the perfect time for one of them to become a star.

This past summer showed that a star player is not required for success, as Roberto Mancini’s unit lifted Euro 2020 gold. The Italians were not a team of 11 individuals, but one that had players who fitted into a system, and the result was beautiful, effective football. The Italian side was full of top-quality players, but there was no obvious star or face of the team.

Compare this to Paris Saint-Germain, who often face the criticism of being 11 brilliant individuals rather than a competent team when things go wrong. A criticism, however, that has some truth to it – often seen through their lack of discipline when things go sideways.

For Barcelona, the former concept looks the most likely to happen but having a star shine through this season could also be a plus, not just on the pitch but off it as well.

The prime candidate will be Antoine Griezmann, which is crazy considering the club spend the summer trying to plan the Frenchman’s exit. The World Cup winner is certainly a star in his own right, but that has not carried over into this team. His time at Barca has been up and down so far, but there was some clear-cut progress last season, especially after the change in formation.

At Atletico Madrid, the Frenchman embraced this role and could easily take it up again at Barca because the World Cup winner still has this feeling with the French national team, often dubbed Didier Deschamps favourite player.

In Catalunya, Griezmann has the ability to become the leading scorer, the prime creator, and a leader – becoming the focal point of the Barça attack.

With Lionel Messi absent, the World Cup winner can take up his old playing style, the one that made him a star in the first place. The ten areas are his now, and it is an opportunity he never envisaged but certainly one he needs to take to still be considered one of the best in the world.

Antoine Griezmann is still a big name in the football world, despite the last two years. If the masses hear that the World Cup winner is banging in the goals and playing well, they will flock in to watch, which benefits Barcelona all around.

Another candidate could be the new boy, Memphis Depay. The Dutchman is not as big a star on the global stage as Griezmann, but the man sure has a swagger about him. Depay has an iconic celebration, an attractive playing style, and a side career as a rapper; all ingredients in making a star.

On the pitch, Depay can pick up where he left off at Lyon because his playing style is aided by the spaces that Messi has left open. The Dutchman is a born creator and an excellent finisher, both seen throughout pre-season.

Barça’s new number nine will most likely take over from Messi as the set-piece taker due to his excellence in this department throughout his career. This gives Depay extra responsibility and confidence through the chance of boosting his numbers, which many football fans regard so highly.

But is Depay ready to take that next step? With all due respect, he may have to take a huge leap if he wants to carry his numbers as they were in Ligue 1. That said, it is unfair to hold his time at Manchester United over his head. The International stage provides the data required, and the forward has not only been a mainstay in the side but the person who has pulled them out of the fire in recent times – encouraging signs for Barcelona, especially under Koeman.

Both players should keep Barcelona ticking over until the youngsters come of age, as Ansu Fati, Pedri, and Frenkie de Jong slowly begin to make this team theirs. As Messi said, “players come and go in the end,” but it goes without saying that although this is the end of an era, it is certainly not the end of FC Barcelona.