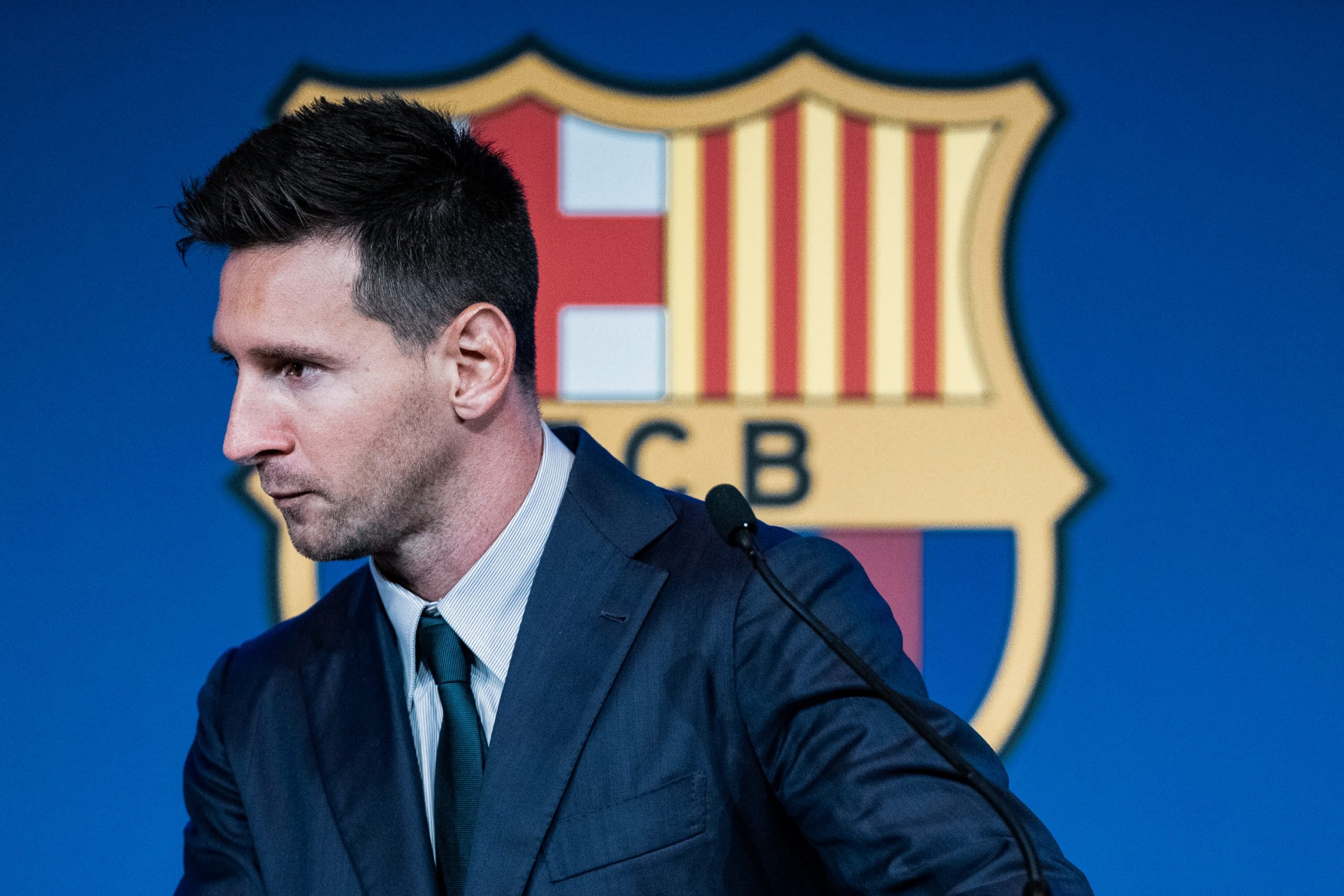 The streets of Paris teem with fans, some who have lined up outside the airport and Parc des Princes for over two days to catch a glimpse of the great man about to join their club’s ranks. They erupt into cheers as a smiling figure walks up to the airport window to greet them, wearing a white shirt with the words ‘Ici c’est Paris’‘. Lionel Messi is officially a Parisian.

“These recent days I have been thinking about what I can say. The truth is that I can’t think of anything. This is very difficult for me, being here my entire life.

“I’m not ready for this. I feel sad because I have to leave this club at a time when I was not expecting it.”

A twenty-one year love story, that started with one napkin, ended with another, but in a way that no one would have ever expected. With every sentence, with every tear and with every single utterance of the phrase ‘I wanted to stay’, the heart continued to crack. The rapturous applause for the greatest player ever was, alas, drowned out by misery and the increasingly ominous realization that Messi would no longer wear the shirt of FC Barcelona.

For someone like him, there would be no sendoff grand enough. Days later, it feels like the soul of Barcelona has left its body and that is how it may feel for the foreseeable future. As if his departure was not devastating enough, it is against his will and the nature of it is cruel.

Like the great man said himself, it has been over a year and half since he stepped onto the pitch at the Camp Nou and heard the voices of his beloved fans ringing all around. Him having to leave without seeing them for one last time, is perhaps the most shattering element of all.

His last few years donning the famed Claret and Blue colors were marred by one disappointment after another, one controversy after another, one heartbreak after another. And while his exit painted the exact unceremonious picture that depicted Barcelona’s landscape in the last few years, Messi, being the one who had to bear the brunt of its ramifications is what makes the mind freeze and the blood boil.

Nevertheless, Leo Messi will be loved forever and always, beyond mortal comprehension, by millions of people who will remember him as the little kid by Rosario who took the world by storm and rose to football divinity. His legacy will extend far beyond the dreadful circumstances in his final years at Barcelona, which we must unfortunately take a look at here, for the sake of closure.

The tenure of Josep Maria Bartomeu got off to a quite wonderful start, as Luis Enrique fit together the pieces to assemble a wonderful squad, led by the firepower of the famous Messi-Suarez-Neymar trio. That team would go on to win the treble an unprecedented second time in the club’s history.

The elation of such a mammoth achievement would rapidly dwindle in the years that followed, as Bartomeu and his board of directors began to slowly wreak havoc on Barcelona’s financial and sporting structure. Spending ludicrous amounts of money on player signings and contracts, siphoning funds to complete tasks that were already complete, or never existed in the first place, and even hiring companies to defame their own players to push hideous propaganda.

A chain of events began unfolding that would have dire consequences. The biggest tipping point was Neymar’s transfer to Paris Saint-Germain. After Barcelona completed their famous remontada over PSG in the Champions League, the Parisiens splashed the cash and spent 222 million euros to acquire Neymar’s services. Money that could have been incredibly useful to the Catalans in the right hands.

Alas, the short-sightedness of Bartomeu and his allies led to a spending of over 250 million euros on the signings of Ousmane Dembele and Philippe Coutinho, who have come nowhere near justifying their hefty price tags. These were among the two factors that set off a domino effect, triggering a spree of reckless spending on players that should have never been signed.

Amid all this, Lionel Messi continued to dutifully carry out his job of talking on the football pitch. Little did he know that there was a flurry of nightmares to come. The Champions League debacle against Roma, the crumbling at Anfield in the semifinals and the 8-2 demolition at the hands of Bayern Munich all culminated into an unimaginable consequence. Messi wanted to leave the club he called home for his entire senior career.

This was also followed by a number of cruel exits for players like Ivan Rakitic, Arturo Vidal and most prominently, Messi’s great friend Luis Suarez who was threatened and cast out.

The Argentine then sent a burofax to the club, stating his desire to exercise the clause in his contract which allowed a unilateral end to his contract one year before it expired. However, Bartomeu would block the move and refused to show the decency to even speak to Messi, which left him with two options: sue the club of his dreams or stay unhappily put for a year.

Messi chose the latter, as he would later explain in a world-breaking interview with Goal, saying that he could never go to court against the club that gave him everything. Sparking a massive wave of support for him and criticism for the board, a motion of no confidence was filed once more against Bartomeu. One had already been filed after the CL defeat to Roma, but it did not get enough signatures to progress.

This time, however, things panned out differently, as the campaign to kick out Bartomeu rapidly gained traction. Ultimately, it would result in the president and his entourage to announce their resignations from FC Barcelona. A move that was widely celebrated, but met with equal uncertainty about the club’s future, especially after the horrifying numbers behind their tenure came to light.

There seemed to be no peace for Leo, as the details of his mega-contract were leaked, which drew immense scrutiny. But everyone surrounding the club came to his defense, saying that he earned the club far more than he cost it.

Barcelona found themselves facing a debt of over 1.1 billion euros, and many ill-wishers blamed Messi’s contract for it, while it could not have been farther from the truth. The scramble for a new president began under interim president Carles Tusquets, who could not make it happen as soon as it should have owing partly to his own incompetence and the effects of the pandemic.

Eventually, after an arduous campaign process, Joan Laporta returned to Barcelona for a second presidential tenure owing to his charisma and most importantly, the assurance on his part that he could convince Lionel Messi to stay.

Following a tricky transition season under Ronald Koeman, where the Blaugrana somehow exceeded expectations and failed them simultaneously, a Copa del Rey title was added to the trophy cabinet, that could have and should have been accompanied by a La Liga crown. Laporta got down to brass tacks after the season ended, faced with challenges greater than ever before — reducing spending, alleviating debt, creating a strong sporting structure and finding a suitable proposal to convince Messi of his future in Catalonia.

Meanwhile, Messi joined the Argentina squad on a seemingly unending quest for silverware with the national team. In a fairytale turn of events, La Albiceleste lifted their first Copa America crown since 1992 led by their talisman’s brilliance. The fans were subsequently treated to the happiest Messi they had seen in ages. Smiling, enjoying his vacation with family, many believed this would be the catalyst for Leo to extend his contract.

Indeed it was, as the Argentine had previously rejected offers from PSG and Manchester City, having his heart set on the Blaugrana crest and nothing else. He and the club agreed on the terms of his contract, Messi even cooperated and accepted a 50% pay cut, even asking if he could do anything more. Laporta said no, confident that he could be renewed and merely his signature left to be penned.

Alas, Barcelona’s overflowing salary mass, piled on top of the already tattered accounts reared its monstrous head. Up until the very end, it seemed like Laporta had delivered on his promise and it seemed the same way to Messi, who returned from his vacation in Ibiza to pen a new deal with the Claret and Blue. Things were not that straightforward though, and the media’s reports of the deal collapsing had already led the fans to believe the worst.

All the other players in the squad bar Gerard Pique had refused to accept a salary reduction and Barcelona’s wage bill amounted to 110% of their revenue, whereas La Liga and Financial Fair Play regulations deemed that it should not exceed 70%. As a result, they have still not registered the new signings Sergio Aguero, Memphis Depay, Emerson Royal and Eric Garcia.

On the day of Messi’s return, La Liga president Javier Tebas had accepted a deal with private investment firm CVC, who would sign a near 2.billion euro agreement with the LFP in exchange for 10% equity, handing Barcelona 271 million euros. This would give them just enough financial leeway to extend Messi’s contract and register their new arrivals.

However, Barcelona later discovered worrying details in the agreement, which they considered as debt for the future despite gaining money today. This led to them rejecting the deal and as a consequence, Leo Messi would have to leave. What was supposed to be a courtesy meeting between Laporta and Jorge Messi to finalize the renewal, turned into an ordeal when it was revealed that the mercurial Argentine’s time at the club had to end.

Laporta explained the scenario in his press-conference the day after and Lionel Messi spoke a couple of days later in an incredibly emotional presser. The teary-eyed Argentine looked devastated as he announced that ‘we did everything we could, but it wasn’t enough.’ What seemed imminent, turned to impossible in a matter of minutes.

The fateful day of 6th August 2021 will always be remembered as a dark day in Barcelona’s history, as they unceremoniously bid adieu to their greatest player ever.

As Barcelona embark on a new quest in an era without Lionel Messi, all that is left to say is that these last few years were a cruel, unjust and inaccurate representation of this great man’s illustrious career in a Blaugrana shirt. As fans of him, the club and the sport of football, we can only thank him for all the unforgettable moments of magic he has bestowed upon us all.

To Lionel Andres Messi, you deserved a farewell as divine as your footballing ability. A jam-packed Camp Nou roaring your name like there’s no tomorrow. The city of Barcelona coronated from top to bottom and a parade with you hoisted above for everyone to see, to admire and to thank. We will be eternally grateful because no send-off could have been grand enough. There is no doubt you will succeed in Paris, but we wish you all the luck nevertheless.

And as you said to the journalist in the final press-conference, we hope that you return to your home sometime in the future so that we can give you the adoration you deserve. This is not a goodbye, but a see you later. Thank you Leo, the greatest of all time, forever and always.