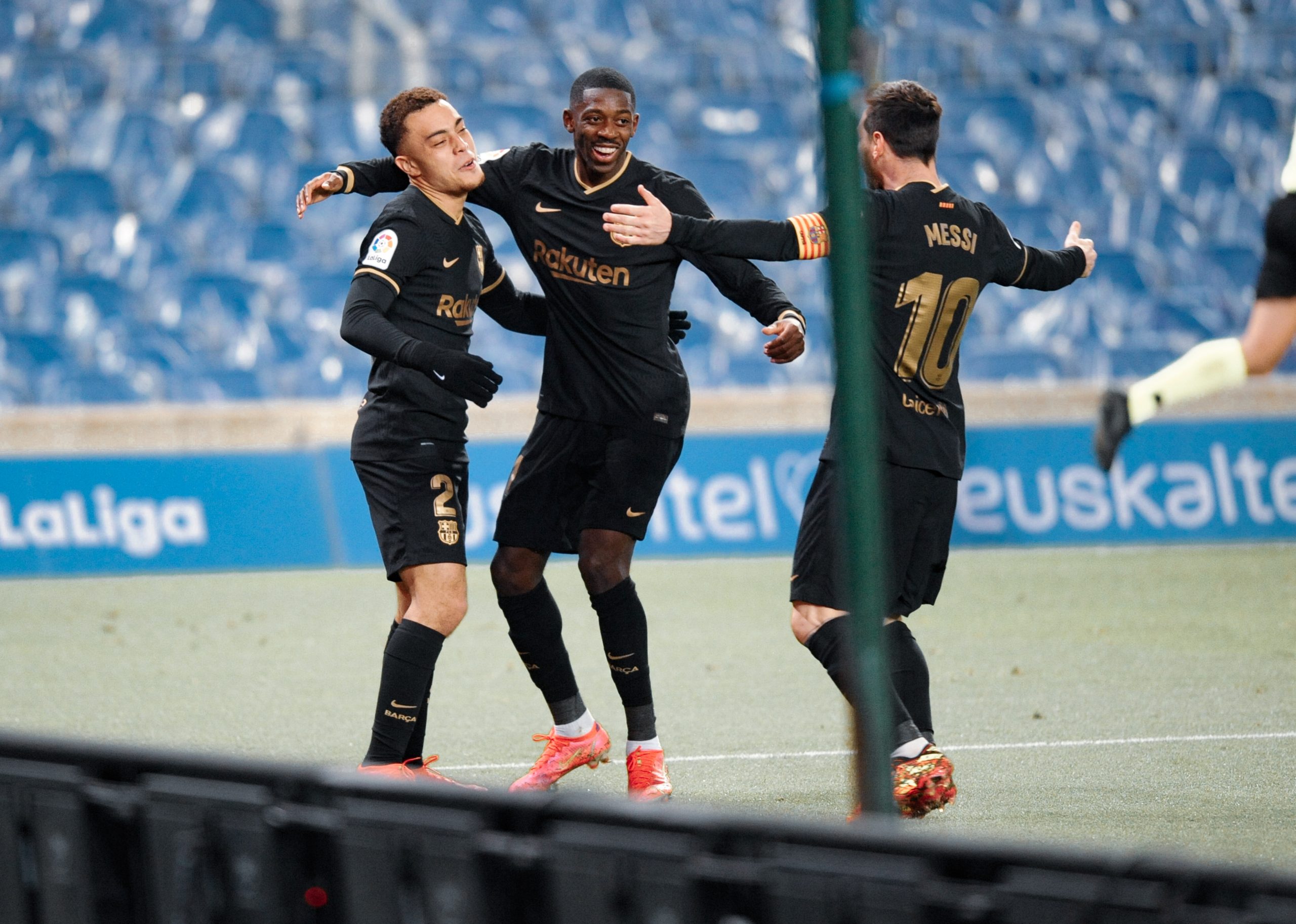 Playing at Anoeta has never been an easy task for Barcelona. Over the years, it has gained the reputation of being a stadium where the Catalan giants are bound to drop points despite having a team full of superstars. Thanks to Ernesto Valverde, a 9-year curse was stabbed to the floor during his maiden tenure with the club.

This season, though, the possibility of facing the best Real Sociedad sides in years in a do or die game, Barça went into the game with optimism owing to their incredible run of form. The optimism was replicated on the pitch as the game ended 1-6 in favour of the visitors. Barça Universal runs the rule over Ronald Koeman’s men.

Ter Stegen did not have an awful lot to do on the night, with the Barcelona attack taking care of the game. But, he did make four saves including a low driven strike from Alexander Isak, which came as a result of a poor pass from the German himself. Could barely do anything for the goal.

Oscar Mingueza’s meteoric rise from being the third-choice centre-back in B team to becoming one of the first names on the team-sheet for the senior team has been sensational. He proved it again yesterday with a solid performance. Was also responsible for winning the ball, and starting the move for Barcelona’s jaw-dropping sixth goal.

Every step de Jong takes on the pitch is calculated, and every pass results in an attack. Playing in the centre of the Barcelona defence yesterday, the Dutchman won all his ground duels (3/3), all his aerial duels (1/1), and completed 2/2 of his long balls. Losing possession just four times, it was yet another standout showing from de Jong.

After a series of more than decent performances, Lenglet looked shaky yesterday. He had to deal with the marauding runs of Portu while Jordi Alba ventured forward. While usually he makes up for that with some brilliant piece of passing, the Frenchman completed no more than 2/6 long balls.

Sergino Dest perfectly encapsulates the modern-day fullback — a player who loves to venture with the ball at his feet, taking on players with bravery and skill. The American also loves to shoot and got his reward with a brace yesterday. Not only that, he managed to hit the woodwork — AGAIN —, too.

2021 has been incredible for Sergio Busquets, who seems to have rediscovered his best form in the ever-changing system of Ronald Koeman. Slotting as a pivot alongside Pedri yesterday, Busquets not only assisted Lionel Messi for Barcelona’s fourth but was able to resist the strong winds of press of La Real’s midfield.

Not the best day for Pedri, facing Mikel Merino and Ander Guevara in the centre of the pitch. The Spaniard won two tackles, but was unable to create any chances.

Jordi Alba has been in some bizarre form in 2021. Playing as a left-wingback as helped him find the right balance of duties in the attack and defence. Yesterday, too, the former-Valencia man assisted two goals, creating a total of four chances, including a beautiful pass to Lionel Messi for the final goal of the night.

Lionel Messi’s genius is such that you have to stand up and applaud even though you are watching the game in front of a TV screen. Reaching the milestone of the highest appearances for Barcelona, yesterday was one of those games.

The Argentine helped double the lead with a slick through ball to Sergino Dest who made no mistake with his finish. 20 minutes after that, he got one of his own, with a perfectly-timed run which Busquets simply could not miss. Finally, a sensationally-constructed goal sealed a flawless performance as the six-time Ballon d’Or winner contributed directly to three goals for the second game running. Messi should be celebrated.

It has become increasingly difficult for Antoine Griezmann to fit into the Barcelona setup, but he came up with the goods, again, yesterday. After Alba’s cross was not put to bed by Ousmane Dembele, Griezmann’s perfect positioning helped him slot the ball into the goal with ease. Additionally, he created one chance, and won three tackles.

Ousmane Dembele is not a centre-forward, and it has been proved several times over this season through his poor finishing, including the last three games. The Frenchman, against Sociedad, scored one, when he had the chance to score at least three. One of his goals was wrongly disallowed for offside, but an overall quiet outing for Dembele.