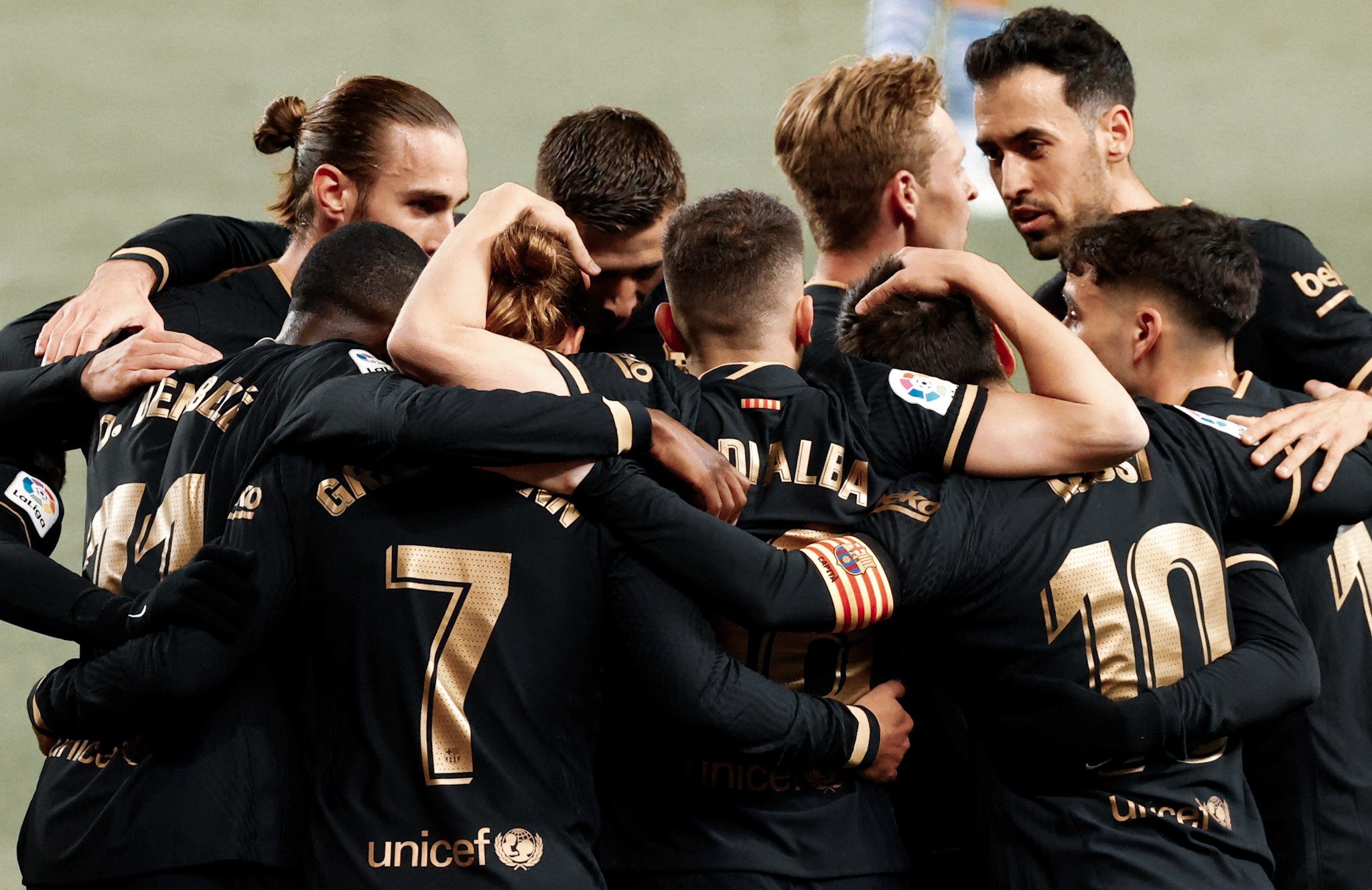 Photo by Javier Etxezarreta via Imago

Barcelona went to Anoeta with one clear intention: To win the game. With the same lineup, Ronald Koeman’s men had to confirm their good run of form in a usually tricky ground, Anoeta.

The Catalan giants were superior, even though their opponents were not too bad themselves. The visitors had more of the ball, but the locals defended as if their lives depended on it.

After many attempts, the best team on the night got their breakthrough. Barcelona were leading 2-0 at half-time and deservedly so. Koeman’s men deserve a lot of praise for such a through performance.

What a performance! A brilliant, well-organised display by a team in complete confidence right now.

Everyone was brilliant, from Marc-André Ter Stegen to Ousmane Dembélé, passing by the usual suspects in Lionel Messi, Pedri and Frenkie de Jong. The Catalans, on the same day Atletico Madrid put on a pale showing against Alavés at home, did not only put the best team in La Liga performance, but the show was also worthy of the best team in Europe shouts!

The visitors’ goals were delightful, their performance, apart from one meaningless mistake, even better. Such arrangements will only make Koeman and his men more popular in the Blaugrana fanbase, and these people deserve it.

24′ Real Sociedad launch the ball forward, and Frenkie de Jong tried to cover it. The Dutchman makes a weak backpass, and Alexander Isak runs towards Marc-André Ter Stegen, who denies the Swedish forward from close range.

36′ GOAL! Real Sociedad 0-1 Barça: Barcelona cap off a brilliant team move with a classic combination between Lionel Messi and Jordi Alba. The left-back’s cross gets to Ousmane Dembélé, who misses his one-on-one. Antoine Griezmann, right behind his fellow Frenchman, scores to open the scoring for his side on his birthday.

39′ Right after the opener, Isak has another go at Ter Stegen after the keeper’s shaky pass went right into Mikel Merino’s feet. Again, the German goalkeeper makes a brilliant save to deny the striker.

43′ GOAL! Real Sociedad 0-2 Barça: Sergio Busquets and de Jong play a game of their own in the middle of the pitch. The former sends Messi on the counter, and the captain uses Ousmane Dembélé’s dummy run to make a through ball towards Sergiño Dest’s path. The American’s excellent finish doubles the lead for his side.

53′ GOAL! Real Sociedad 0-3 Barça: Pedri and Griezmann play a brilliant one-two in front of the opponents’ box. Pedri lays the ball off to Alba, who goes deep into the box and sends a beautiful cross to Dest. The right-back scores the third Barça goal of his career and his second in La Liga!

56′ GOAL! Real Sociedad 0-4 Barça: Busquets, from the centre circle, finds Lionel Messi with one of the most delightful pinged through balls. The Argentine legend finishes the move off brilliantly. 4-0 Barça.

66′ Dembélé makes a brilliant run in behind the defence, and Messi spots him. VAR deems the Frenchman offside after he finished it from range.

71′ GOAL! Real Sociedad 0-5 Barça: Dembélé gets the ball in the middle of the pitch and dribbles past three players. The Frenchman enters the box and directly launches a rocket towards the bottom corner. 5-0 Barça and a brilliant goal for Dembélé, whose confidence needed it.

77′ GOAL! Real Sociedad 1-5 Barça: La Real’s superb move opens up the whole defence as Ander Barrenetxea is on the edge of the area. The teenager’s strike is sublime and allows his team to go back home with something positive.

89′ GOAL! Real Sociedad 1-6 Barça: Barça play some beautiful passes in La Real’s box as Alba, Riqui Puig and Messi combine superbly. The former’s cross is the cake for Messi’s strike to put the cherry on top. What a superb goal and an even more stunning finish.