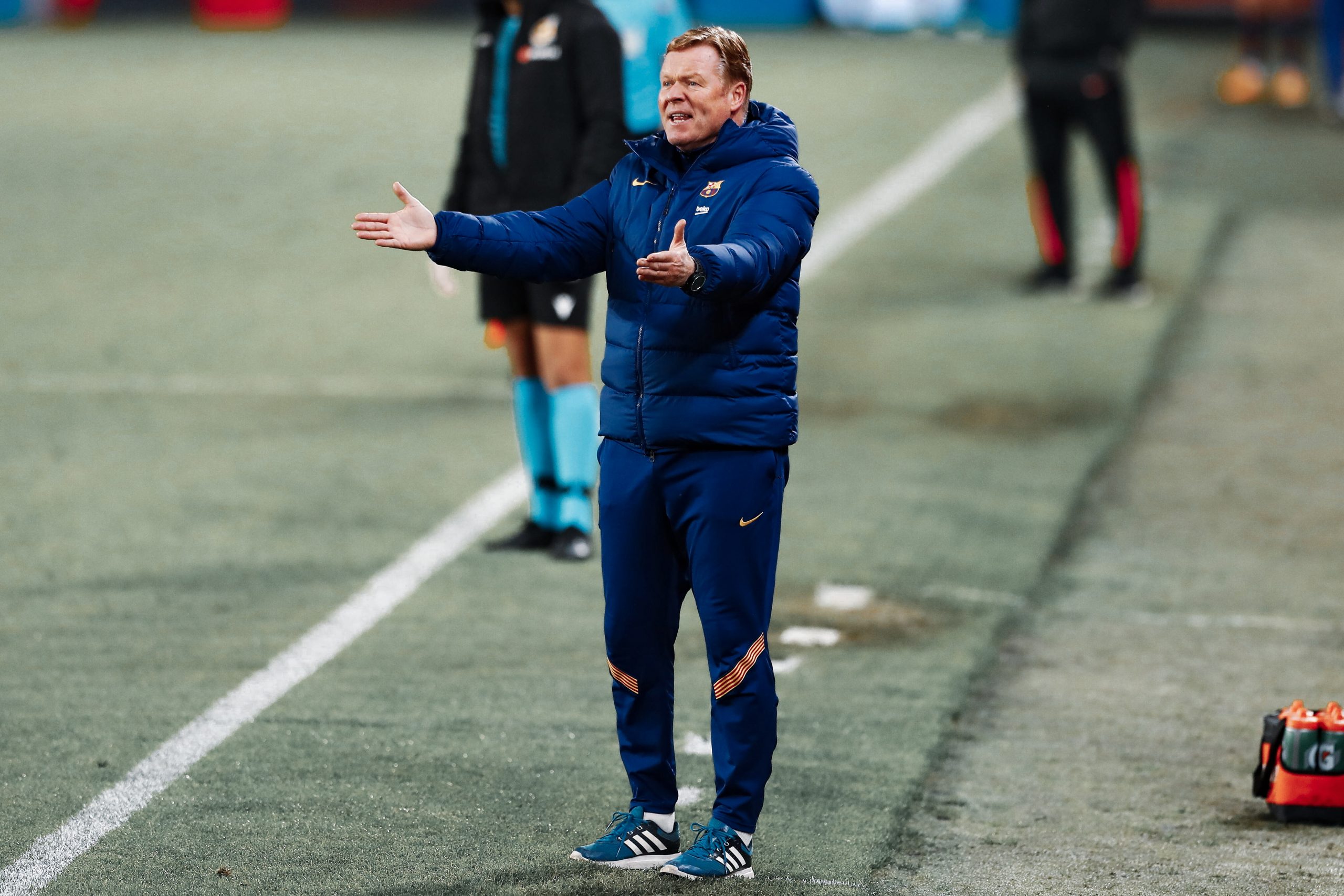 The business end of the 2020/21 season is here with a cup final and an intriguing title race waiting for Barcelona, and Ronald Koeman, who, by the looks of things, is staying at the club. Is it the right decision?

With the appointment of Joan Laporta as the club’s president, Barcelona are now cautiously optimistic over the embarkment of a new era, starting from the summer transfer window. While they are aware that the institution can’t be immediately freed from the ravages of Josep Maria Bartomeu’s presidency, a step-by-step initiative should be taken to rebuild the club. The area of the highest enigma is that of the managerial position.

With Koeman being a Bartomeu appointment, numerous supporters have doubts over whether Laporta would let the Dutchman fulfil his contract, which is due to expire at the end of the 2021/22 season.

With one more season left in Koeman’s bank, there are many questions on whether he genuinely deserves to stay as coach after this season finishes. However, the majority of the reservations were put to rest by the newly elected President, who offered his complete backing to the 57-year-old.

“Ronald, you have the confidence of this board. The team has improved and we have to try to win again. If we recover our economic level, we will be competitive again in the Champions League. We can win La Liga and the Copa.”

With Laporta publicly backing Koeman, the attention now turns to what the club can achieve this season to cement his place as the coach for at least one more year.

All to play for

Despite Barça’s premature exit from the Champions League at the hands of Paris Saint Germain, the spirited effort in the second-leg certainly brought positive spirits to the Blaugrana camp. The first-leg forced them into a position where they had too much to do in Paris, but the team as a unit gave everything to reverse the scoreline. In the end, one could even say that had Lionel Messi put away the penalty in the first half, the tie would’ve opened up for a miraculous comeback.

Nonetheless, Koeman’s side left the Champions League not only with a bitter taste but also a sense of optimism for the competitions that they’re still in. Only four points separate the azulgranas from the league leaders Atlético Madrid, who were initially on their way to an unchallenged title clinch. The Colchoneros’ recent dip in form has not only pressurized Diego Simeone’s side but has also paved the way for both Barcelona and Real Madrid to reignite their title-winning ambitions.

With exactly eleven matchdays left, it’s safe to say that the gap is not insurmountable for the Catalans, should they maintain their recent run of form. They are on a four-game winning streak and will be hosting Real Sociedad this week. Should Barça continue to maintain pressure on the leaders, they will eventually gain the chance to leapfrog them when they face Atléti on matchday 35.

On the other hand, a Copa del Rey final awaits the Catalan side, who will be looking to right the wrongs of the Supercopa de España final when they face Athletic Bilbao. The spirited second-leg comeback against Sevilla in the semi-final sees them in a favourable position to win their first piece of silverware since Ernesto Valverde’s dismissal.

So, Koeman is very much aware of the fact that his position can’t be in immediate danger, considering that his team is still fighting for two major honours. While the fans will be pushing to win both La Liga and the Copa del Rey, any form of glory for this season should ideally be enough for Laporta to keep Koeman for another year.

Work with the youth

With the constantly changing landscape of modern football, the integration of youth has started to become more and more important. The 2020/21 season has brought an unprecedented amount of injuries for many clubs, with Barcelona being one amongst them. The season started with a high-flying Ansu Fati, who succumbed to a major knee injury, and from thereon, it has only gone downhill. The club has endured long-term injuries to many players across various positions. With the odds being harshly against Koeman, who would’ve ideally wanted all his players fit, then turned to the youth.

The introduction of academy products like Ronald Araújo, Óscar Mingueza as defensive reinforcements has helped the side brave through their crisis. However, while Araújo himself got injured this season, Mingueza has taken his opportunities and has proven to be a reliable centre-back. He has given Koeman the license to experiment with a back-three in which the 21-year-old does a good job on the right.

Furthermore, the fans are pleased with how Koeman has made Pedri a crucial member of the side. The 18-year-old has had a wonderful first season at the Camp Nou and has received accolades from numerous fans and pundits for his versatility.

His on-pitch chemistry with Messi has flourished over the recent days and has resulted in the club structuring some eye-catching patterns of play. While Koeman’s initial treatment of Riqui Puig resulted in the Dutchman being subjected to a lot of criticism, his overall development and work with the youth can be seen as a positive effect.

One major requirement for being Barça’s coach is to ensure that the future is not compromised in place for immediate success. Even in the club’s worst days, the philosophy of integrating youth products from La Masia into the first team can’t be yielded. However, it will be interesting to see if Koeman’s stance changes on the youngsters once he has a fully-fit squad at his disposal.

The Ronald Koeman era has been far from ideal. There is no way anyone could overlook the fact that he has been unable to find a place for Miralem Pjanić, who was swapped for Arthur Melo, whose departure infuriated the fans. Furthermore, the exit from the Champions League is still difficult for the club’s hardcore fans to swallow as they believe that another year of Messi’s career is being wasted. On the other hand, Messi’s future itself seems to be hanging on the balance, with Laporta vowing to do whatever it takes to keep him at the club.

With numerous uncertainties both on and off the pitch, one can’t simply sympathize with Koeman as he’s taken over the club during unprecedented circumstances. Even if he has made mistakes during his period so far, he still has the club placed in a position to finish the season on a high. Also, from a financial standpoint, firing Koeman and bringing in another manager with a different vision and different player requirements might be unfeasible right now.

The writing on the wall is simple, if Koeman delivers silverware, he stays another year. There isn’t much that a manager could do with his hands tied through various on and off-pitch disparities. And so, even if Koeman’s continuation as the coach for next season could be risky, it’s no less than what the Dutchman deserves for doing a respectable job so far.