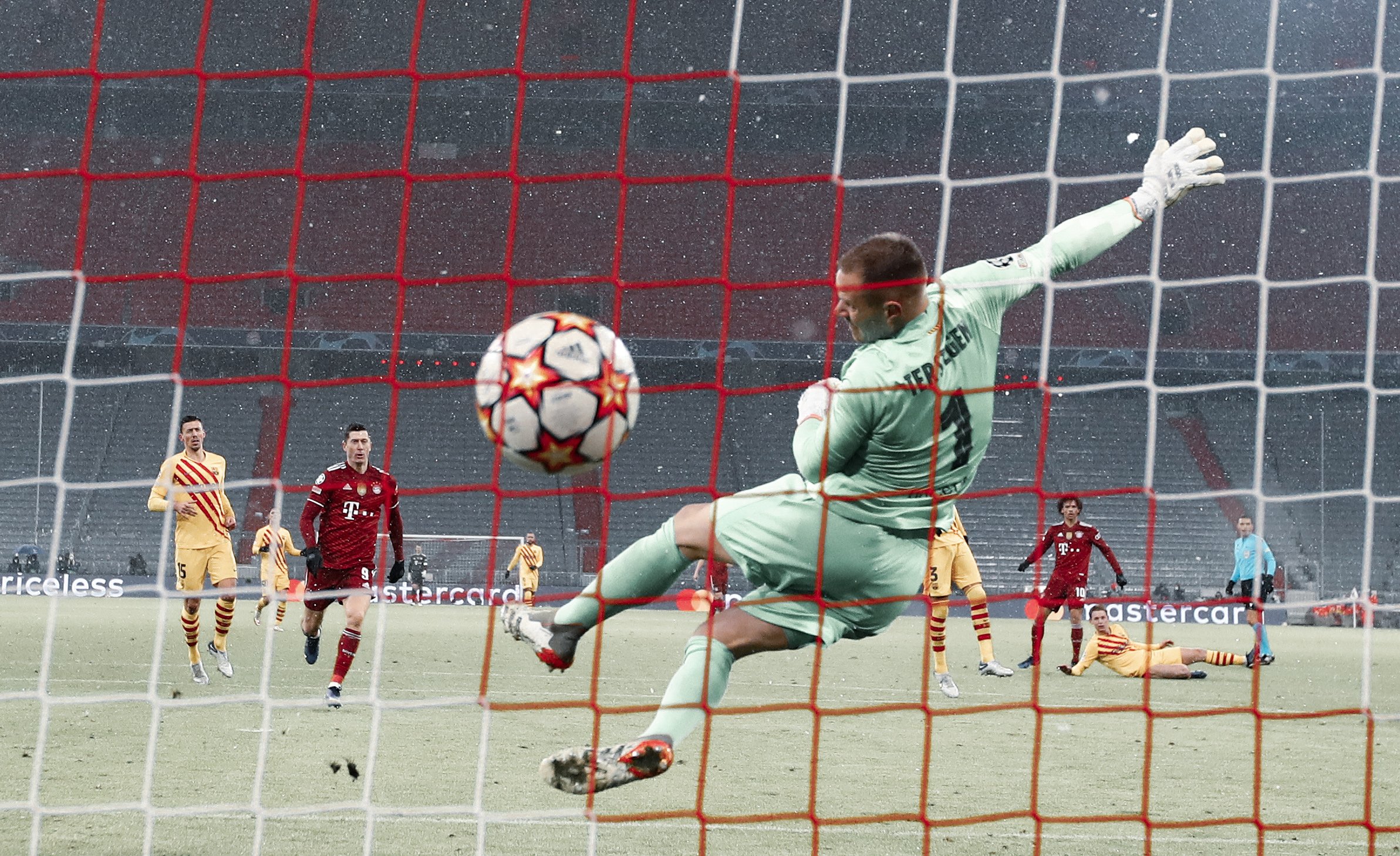 Fresh from their relegation to the Europa League, Barcelona return to action on Sunday as they take on Osasuna in a critical league clash.

Xavi has a massive task ahead of him and eagerly awaits the January transfer window to get some reinforcements. The manager feels that several players lack the character to play from Barcelona, and a few departures and signings are essential.

Until then, the Catalans will have to make do with the resources at their disposal. Barcelona are still without the services of Pedri and Ansu Fati. The big news, however, is the injury to Memphis Depay and Jordi Alba. The duo are a doubt heading into the weekend clash, forcing Xavi to alter his strategy. Here is how Barcelona could lineup against Osasuna.

Marc-Andre ter Stegen had a horrendous outing against Bayern Munich. The German’s decline over the past two seasons has been evident, but the game midweek seems to have flipped some switches. There is more pressure than ever before on his shoulders now.

Gerard Pique, too, has faced a similar backlash since the defeat to Bayern. Age has been quickly catching up with the Spanish centre-back. Given the club’s delicate sporting situation, the captain needs to step up.

Ronald Araujo will likely partner Pique on the night. The Uruguayan has been a solid wall for the side this season, providing both consistency and reliability. He will have his work cut out against the likes of Chimy Avila and Ante Budimir.

Jordi Alba is not expected to start at El Sadar. The fourth captain’s injury could provide the ideal opportunity for Alejandro Balde to prove his worth to the new manager. While it seems Xavi prefers Oscar Mingueza to be deployed on the left, his performance in the UCL left a lot to be desired.

Sergino Dest had an impressive start to the game against the Bavarian outfit on the right-wing, but tomorrow he’ll be back on the right of the back-four. Barcelona lack attacking options up front, and the American’s contribution in the final third will be vital.

Sergio Busquets came under heavy criticism for his slack performance in Germany. The captain failed to conjure his magic at Allianz Arena as he struggled to withstand the host’s pressure. The onus will be on him to return to form at El Sadar.

Nico Gonzalez is expected to be back in the lineup after starting on the bench against Bayern. Up against a side with a closed five-man defence, his vision and creativity will be all the more important.

The final name on the midfield roster will be that of Frenkie de Jong. The Dutch midfielder was rumoured to have been put on the transfer market earlier this week. However, the rumours were quickly shut down by the club. He will start on the night.

Gavi was congratulated for his performance by Xavi against Bayern, but starting a 17-year-old week-in-week-out will lead him down the same path as Pedri. Barça have Ez Abde available for the league, and he’ll start on the left.

Ousmane Dembele is expected to start on the right-wing after a mixed outing at Allianz Arena. The Frenchman once again showed that he possesses the X-Factor that the side need, but also reaffirmed his poor decision making and finishing.

Xavi is evidently not a fan of Luuk de Jong, so expecting him to start will be farfetched. As a left of centre option, we predict Yusuf Demir will be given the reigns through the centre.

The Austrian is more than used to playing as a second striker from his time with SK Rapid Wien. He’ll be used as a False 9 tomorrow, and this could be his chance to earn the manager’s trust.

Riqui Puig has featured regularly off the bench under the new boss, and the pattern is expected to be repeated again tomorrow night.

Meanwhile, if Gavi starts off the bench, he’ll undoubtedly see some minutes in any scenario. It could either be in the midfield or the attack.

Ilias Akhomach is expected to feature on the squad list tomorrow and will likely come off the bench to see the green of the grass.

Finally, we expect Clement Lenglet and/or Eric Garcia to come in the second half to bench the starters, especially Pique, who is entering the final juncture of his career.