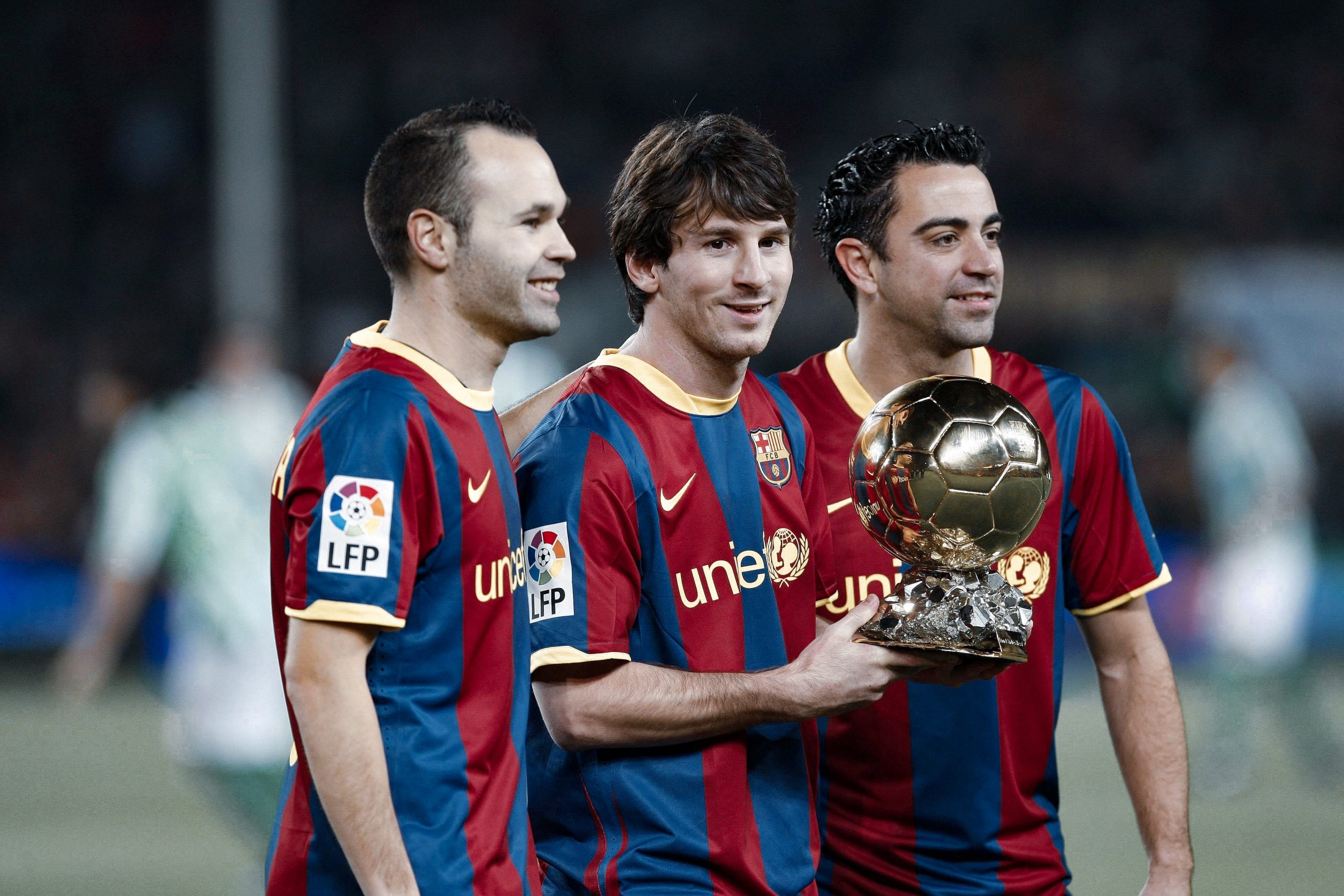 An inconspicuous morning at the Ciutat Esportiva on the 6th of December, 2010 was interrupted by a historical message. The Ballon d’Or podium would be composed of three players from the same club and the same academy.

In a feat that is yet to be repeated, the massive presences of Lionel Messi, Andres Iniesta, and Xavi Hernandez were felt across Europe throughout the year. That was arguably the moment that La Masia peaked. As the three posed together at the end of the training session for a photo, clasping a football together, they represented everything Barcelona stood for and everything that Barcelona’s football signifies.

A decade has passed, and it’s not a surprise to see that La Masia is yet to reach those heights. Players like these are generational. We know that for Messi, Iniesta and Xavi to reach the heights that they did, a lot of factors came into play. Out of these, La Masia’s backroom staff, coaches, managers deserve immense credit.

Since then, football has undergone changes as it always does. From controlling the game and keeping possession, and playing a patient passing game, the landscape is now focused on two major phases of play. Pressing and transitions. This raises a question which this article will try to answer; what changes, if any, will La Masia and, in turn, the Barca DNA have to undergo to adapt to the current state of football?

In the 2000s and towards the early years of the 2010s, football was to some extent based on the French approach of pacey attackers with a strong midfield consisting of a ‘water-carrier’ type player accompanied by a more creative player, or on the Spanish approach of keeping possession and patiently playing your way around the opposition. In the past few years, the emphasis has been on efficient and intense pressing with innovative, adaptive transitions.

For example, though the pressing systems of some teams in the last decade, such as Sir Alex Fergusson’s Manchester United or Pep Guardiola’s FC Barcelona, were highly potent, they were not as intricate or well-timed as the current pressing systems. Rather, they were based majorly on optimal positioning and high work-rates.

It’s not that there aren’t teams that look to play a possession-based game nowadays, but that innovations in pressing and transitions are better rewarded due to the current footballing landscape.

You would be hard-pressed (pun fully intended) to find teams a decade or more ago that carried out these activities as well as Borussia Monchengladbach, Liverpool, or RB Leipzig do now. The positioning, player roles, and individual instructions, combined with the team’s structure and triggers, all combine to create a beautiful clockwork mechanism of pressing and transitioning.

Changes to the Barça style, if any

There is something special about the principles that La Masia is based on. Apart from those related to personalities such as humility, sincerity, and discipline, the more tangible ones such as the footballing model and the core philosophy behind it are in themselves a representation of a club of massive historical stature. What makes them special is how some of them act as the base, the sturdy philosophy, while some serve as flexible paths acting as a way to progress.

For example, consider the formations used in Barcelona. The 4-3-3 is always preferred as it allows for attacking play, controlled possession, and makes the most of great technique. This is a factor that is flexible to an extent. The most obvious example is Ronald Koeman’s recent 3-5-2.

Not a 4-3-3, but yet a formation that makes the most of great technique and looks to maintain possession. Granted, the formation is not the only thing that allows for the aforementioned qualities. It instead acts as the flexible path and allows for optimal balance between the club’s philosophy and tweaks made to the team to optimize the performance.

A rather steadfast characteristic is basic positional play. Optimal spacing, receiving behind the lines on the half-turn, forming triangles. Such aspects of Barcelona’s game are non-negotiable and for good reason. Having been taught these skills from childhood, every La Masia player assimilates them from day one.

These fundamentals are more than just simple abilities or skills. They are qualities that allow the player to adapt to most conditions and situations. This is because optimal positioning is the key to playing well in any position.

For a defender, tackling is then next best step once the positioning is sacrificed. For a midfielder, the body-orientation when receiving and ideal positioning are frequently very hard to display consistently. Similarly, offensively, positioning and spatial awareness — once again, things that are the basis of what is taught as part of modern football.

The point being, these core principles and the basics of what has been taught at La Masia and adapted by countless teams and systems across the globe. These should remain unchanged and should continue to form the basis for the players’ development. Not only are they fundamentals in football, but the way they are taught at Barcelona are such that they allow the players to adapt to situations well, perform with versatility and have a strong foundation.

The question posed in this article is not one with a candid answer. There is no single interpretation, it is impossible to neglect what is taught at La Masia or accept it completely. The basics, however, must remain. To ascertain the changes or alterations needed, let’s consider the cases of Riqui Puig and Ilaix Moriba, along with an exceptional midfielder and Gerard ‘Peque’ Fernandez.

Puig has had problems establishing himself under every manager in the first team. Apart from this, until recently, he was often neglected by Spain’s youth squads, only to receive the invitation for the U-21 Euros. The theory of him being physically deficient is, to an extent, true.

Consider Ilaix Moriba, a midfielder who has the same basics as Puig but is stronger, bigger, and has better shooting ability. In term of passing and vision, though, Ilaix needs improvement.

However, his skills are such that they allow his managers to count on him to make a difference despite the system. The point being made here is that not all short and agile midfielders can easily fit into the current footballing landscape. Different skills such as ball-carrying under pressure, strong attacking presence, etc., are not the norm for La Masia midfielders, but the lack of the same is being felt now. The examples of Xavi and Iniesta always spring to mind, but their pure intelligence and technical prowess is unmatched.

However, things are rarely black or white. There is a middle ground or an amalgam of both. And in this case, it is the aforementioned special midfielder — Nico Gonzalez. Currently playing for Barcelona B, Nico is a midfielder who represents modernity in the academy.

18-year-old and at 188cm, what immediately stands out regarding him is how he seems to glide across the pitch. Tackles come in, and they either bounce off him, or he just skips past them. Apply pressure on him, and he turns sharply and leaves the defenders looking at thin air. What makes him even better is his laser-guided passing and excellent special awareness. He has impressed everyone, and according to some news outlets, Ronald Koeman is looking to integrate him into the squad next season.

What Nico represents is a hybrid of two types of midfielders. The orthodox La Masia central-midfielder, an agile, technically proficient passing master combined with the attributes of press-resistance, strength, and balance needed to do well in the modern game.

Barcelona B’s striker, Gerard Fernandez, or ‘Peque’, as he is nicknamed, is a typical Barcelona striker. His link-up play when he drops back is always spot-on, his capableness in the box, admirable. To an extent, similar to Abel Ruiz. However, what they both lack is the ability to make a difference on their own.

Heading is naturally an issue, but apart from that, these aren’t the kind of strikers who can finish from anywhere in the box despite their usually impressive efficiency. Rather, they pass the ball into the net.

Though they have a unique skill set, one must also consider the needs of the modern game. A player like Mauro Icardi would not be preferred over a player like Erling Haaland or Kylian Mbappe. This doesn’t mean that Icardi isn’t an excellent player. It’s just that the situations needed for him to do well are much more constrained than those needed for the former two.

It’s clear now that Barcelona need to retain the basis of what they teach at the academy. However, there are other skills that need to be given importance as well. It would be unrealistic to expect shooting akin to Ilaix from Riqui Puig. Despite this, to a certain extent, the latter would only benefit from picking up some of the abilities of the former. Players like Nico Gonzalez or Pedri Gonzalez, hybrids of what the past had to offer and what the future needs, are more valuable now than ever.

The philosophy that has gotten Barcelona where it is now is should remain the core of the academy. That is not negotiable. But there are areas, which if focused slightly more on, could make a huge difference and maybe, just maybe, eventually come close to replicating the iconic photo of Xavi, Iniesta, and Messi at the training ground.