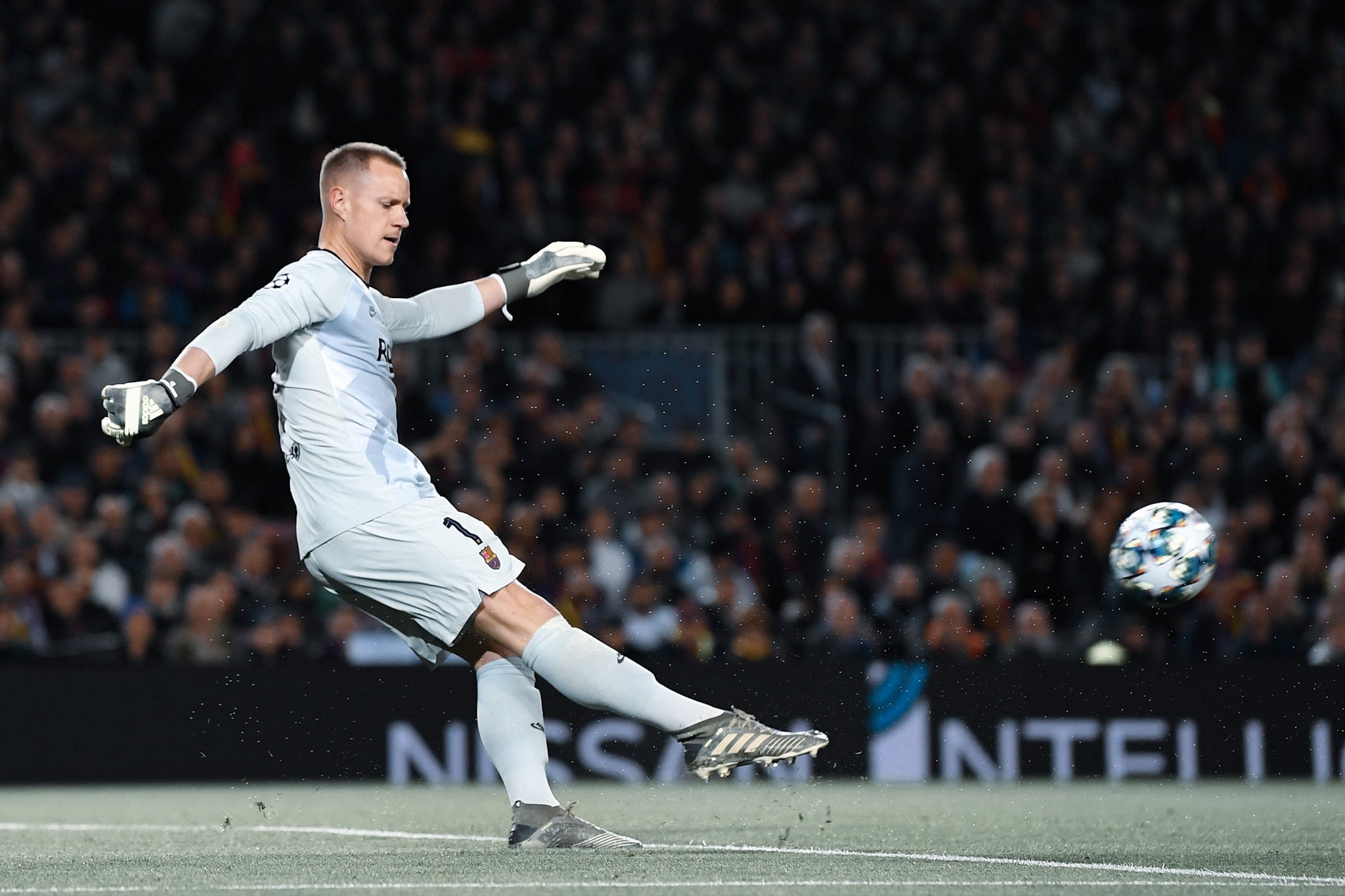 Marc-Andre ter Stegen has been a rock at the back for Barcelona for over six seasons, complementing his match-winning saves with defence-splitting passing, helping the team play the ‘Barça way.’

Goalkeeping is probably one of the most thankless jobs. In the local games I used to play at my village, being a goalkeeper was often equated to being too lazy to run. On the other hand, at the highest echelons of football, goalkeepers serve as the biggest scapegoats. While a striker who scores thrice in a match is a hat-trick hero, a goalkeeper who saves three goals is ‘just doing his job.’

A decent season of protecting the goalpost may get ruined by one mistake. Whole careers getting tainted due to a single unfortunate error occurs more often in the goalkeeping world than one can imagine. Marc-André Ter Stegen, Barcelona’s first goalkeeper, has had his fair share of so-called ‘bloopers,’ only to bounce back, stronger and more determined. Being a sweeper-keeper who often steps out of the box and savours the ball at his feet, ter Stegen has always played a risky game.

When Claudio Bravo moved to Manchester City in 2016, and a young ter Stegen was anointed in his stead, many among the Barcelona fans knitted their brows at the club’s decision and the young German’s capabilities. In their defence, Bravo was (and arguably still is) a top-level goalkeeper, and ter Stegen’s early performances at Barca had left behind a lot of questions. His miscalculations and positional errors cost them a few goals and a few points early on.

However, instead of hiding in the shadows, ter Stegen owned up to his mistakes: “It’s my fault, I’m really sorry. If I hadn’t made the mistake we could have won this game,” he said. But rather than altering his approach to the game, he dug his heels, strove on and got better.

Ter Stegen learnt from his errors, and only rose thereafter. (Photo by MIGUEL RIOPA/AFP via Getty Images)

“Sorry if my way of playing makes you nervous, but that’s how I play,” he explained to the fans. This was fundamental in how things turned out for Ter Stegen and Barca. He could have easily buckled under the pressure and changed his ways. But above and beyond the confidence that he showed in his style of playing, he was also assessing what his team’s requirements were. So what is the Barça mould for a goalkeeper?

Clichéd as this might seem, the answer to this question also brings us back to the way Barcelona plays out the ‘Cruyffian Way’ of ‘Total Football.’

This is a marked deviation from the traditional role of shot-stopping that is attributed to goalkeepers. Modern football values keepers who are good with the ball at their feet; who can deliver pinpoint passes and act as an outlet for the defenders to recycle the ball and initiate the next attack.

Ter Stegen’s biggest strength probably, is that his head is in the right place. Just as he did earlier in his career, he was one of the first to apologize to the fans following the heart-wrenching losses in the last few seasons. He is also known to be one of the most level-headed figures in the Barca dressing room where things are not always easy.

Another important factor is his consistency. He barely misses games. Apart from early this season, Ter Stegen also has not had many injury lay-offs. In terms of his performance, again, he has been steady and dependable with few surprises for anyone to question his lead, which also makes it difficult for his competitors to get a peep into the team – as Jasper Cillessen found the hard way. But that is a blessing as far as the team is concerned.

For all his strengths, Jasper Cillessen was not good enough to take the starting spot from ter Stegen. (Photo by David Ramos/Getty Images)

On the pitch, ter Stegen is quite versatile. Yes, of all the adjectives to describe a keeper, this is probably the least used. But that is the kind of skill-set that he has to offer. He is an excellent shot-stopper. With saves per game score of 2.25 and 14 clean sheets, he was one of the best in La Liga last season, and int he Champions League, only to succumb to eight goals to Bayern Munich – through no fault of his own.

But the German’s contribution to this squad is much higher. In his two matches since his return from injury, ter Stegen has clocked a passing accuracy of nearly 97%. And this is no fluke. His pass success rates in the league for the recently concluded 2019/20 season was 86%, with a total of 1235 attempted passes. The 2018/19 season followed a similar pattern, as he ended the season with an average of 83%. This, it should be mentioned, after having attempted around thirty passes per game.

His passing range is also noteworthy. While Barça prefers to play from the back using short passing, ter Stegen also launches some very effective long balls. This resulted in two assists for goals last season, one each to Luis Suarez and Antoine Griezmann. He was the only keeper to provide an assist in Europe last season and the first keeper wearing the Blaugrana in the last hundred years.

The fact that he is comfortable with both his feet also helps this cause. It was his passing range that enabled former manager Quique Setien to try out a different method of bringing the ball from the back. One of the central defenders would take a short goal kick and pass it to ter Stegen, who would then try and passing it to the defensive midfielder, thereby taking the high-pressing strikers out of the equation.

As a result, the 28-year-old started stacking more touches and passes than many of his teammates who played in the outfield. Essentially, therefore, ter Stegen switches into the role of a central defender or a midfielder, as and when the team requires him to.

“Marc is incredible…he’s like a midfielder for us. It was a perfect pass that left me with just the goalkeeper to beat.”

His sense of position and reading of the game is also excellent, as one can often see him switch towards the left and right of the goalposts, to give his defenders a viable passing outlet. This helps the team stretch the pitch further and also recycle the ball and initiate the next attack. The priority in possession and passing the ball continuously makes it important to have a keeper like ter Stegen who can handle the pressure of having the ball at his feet.

In addition, the fact that Barca usually play with a high line of defence requires them to have a ‘sweeper-keeper.’ One does not need to look too far back to see how this works out and how crucial it is that it does.

Last month, Barcelona visited the Mendizorrotza stadium to play the home side of Deportivo Alaves. Owing to the fact that ter Stegen was still recovering from his surgery, the Barça rear guard was completed by Brazilian Neto Murara — just as it was, since the beginning of the season.

The turning point in this tough match was in the 31st minute when Gerard Pique made a back pass to the goalkeeper. True, it was not a pressing situation, Pique actually had several options further up the pitch. In his defence though, this was a move for which he never had to think about twice; for usually the pass would be received deftly by ter Stegen, who would showcase his sublime passing.

In a momentary lapse in concentration, Neto fumbled in collecting that pass. Luis Rioja, the opposing striker, saw this opportunity, stole the ball from Neto’s unsure feet and led it to an open goal. Despite an hour of trying hard and even playing with a man advantage in the last half an hour, all Barça could do was level with Alaves and concede a draw.

The point here is not to blame Neto; nor is it an attempt to say that ter Stegen is infallible. But the German’s skill set has become inseparable with the way the Catalans play their game, and the fact became evident in his absence.

It is easy to look at the big European losses that FC Barcelona has had over the past year and blame the German shot-stopper for those, but one should remember that they would not have reached that far in the knockout stages without him guarding their goal. Barcelona’s backline, of late, has been quite brittle. And if there is anything that is holding them together, that is the German wall standing tall at their back. There is a reason he was awarded the Aldo Rovira Award for the best FC Barcelona player in the 2019/20 season.

Amidst all the crises and tribulations that the club has been going through in the past few seasons, of players underperforming, revolting and losing focus, ter Stegen has been doggedly steadfast, both on the field and off it. That he has recently extended his contract with the club till 2025, is, therefore, a piece of welcome news for the team and the fans. For, the guardian angel protecting the Barca goal has all the capabilities of becoming the leader of a squad that is slowly but surely transitioning into a younger and futuristic squad.