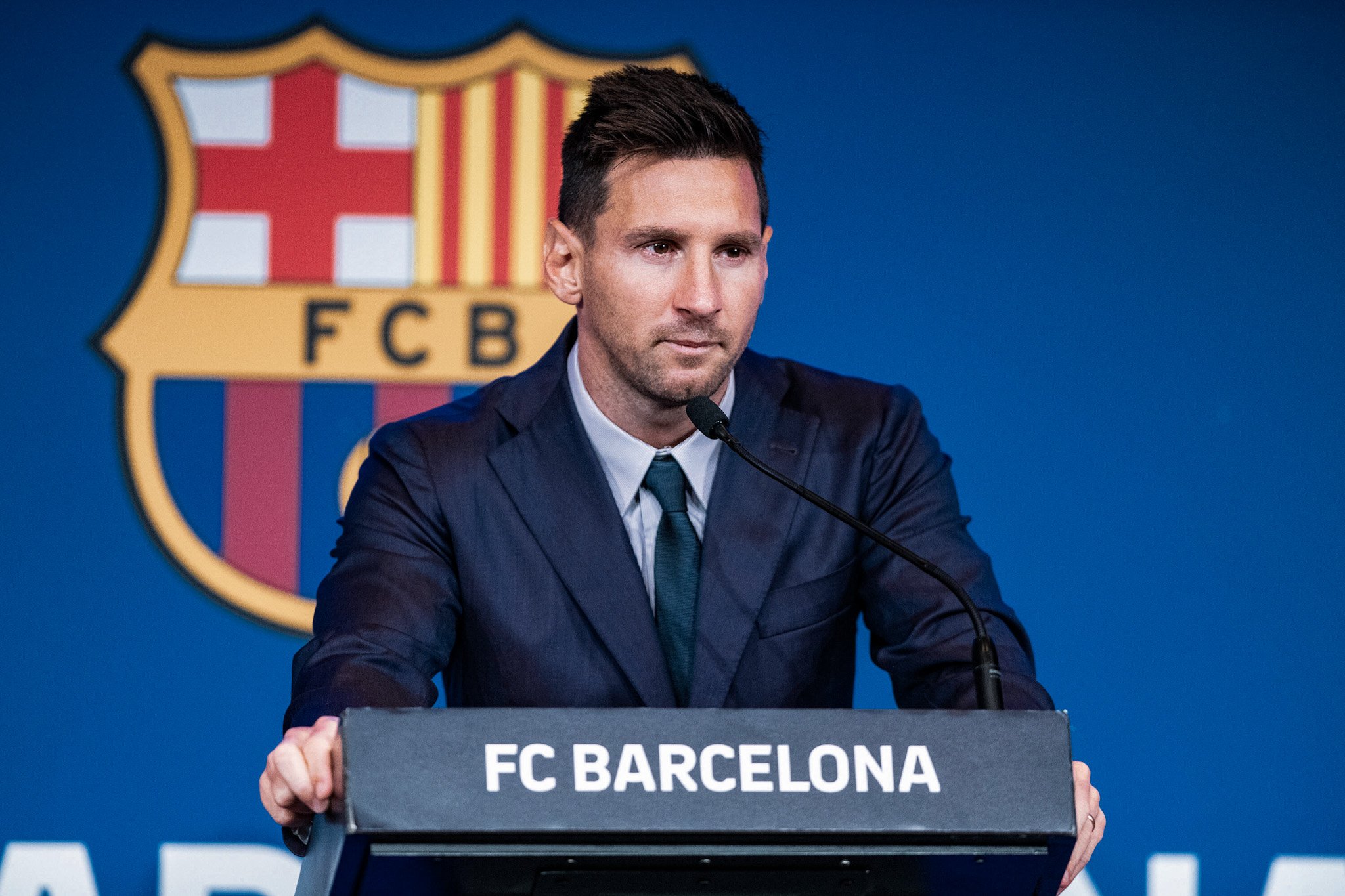 It takes hours of patience, commitment, hard work and faith to build a house of cards. Yet, it all comes tumbling down within a second. That is the law of nature, after all. It only takes seconds for a tornado to undo even the most majestically architectured building to rubble.

Barcelona and Lionel Messi are words that have grown to be synonymous over the years. They say no player is bigger than the club, yet, Messi came as close as is virtually possible to being bigger than the institution he represented. It is nothing less than a fairytale, a love story like none other.

Yet, all it took was two hours. 120 minutes after shocking reports that the talismanic no.10 would leave, he was gone. It was shocking not only to fans but also to the Spanish media, who are usually well connected in the network of updates.

One finds it queer. How did a deal that was sorted, agreed in principle collapse in such grand fashion. How was it that the very morning the captain was reported to be preparing his speech for the Joan Gamper, he had to switch pages and write a farewell message?

Of all the colossal collapses in the world, Lionel Messi’s final moments in Barcelona will always command a spot.

So, what was the situation?

Though it may come as old news, Josep Maria Bartomeu took the club deep into the darkest abyss possible. Mismanagement would probably not be the right word, you’d expect even a toddler would know better. The previous board took the club to a state of emergency.

Economically, Barcelona was, and is, in ruins. By handing out new contracts with audacious wages to undeserving players, the club began to dig its own grave. Needless to say, bizarre transfer window decisions cost the club dearly.

As ESPN’s Sid Lowe rightly said when Paris Saint Germain swooped Neymar Jr from the Camp Nou, all Barcelona needed to do with the €222 million was nothing. The side still had the best pedigree in Europe, a team that would be feared across the globe.

The colossal mismanagement between then and now has ironically resulted in PSG getting another of Barcelona’s legendary forwards. With the financial situation in dire circumstances, one must know that there was very little breathing space for the current board.

Joan Laporta and his election manifesto

A common statement amongst Barcelona’s fans at the moment is, “Joan Laporta used Lionel Messi to win the elections.” We will come to a similar point which may be true, however, that statement itself is pure fiction.

Laporta knows the value of Leo better than anyone else. His tears for Messi during his presentation were real, and so were the words “I love you” that he emotionally told the club captain.

However, as reports have revealed, the reality of the club’s situation was far worse than expected. A recent audit revealed shocking figures, €590 million to be clearer. The audit also confirmed that only 10-15% of the debt the club is in was because of the pandemic. The rest: purely down to mismanagement.

The audit also found contracts of players to have bonuses that were ridiculously easy to achieve, making them almost a guaranteed salary over the fixed-wage.

Why did Lionel Messi end up as the scapegoat?

In simple terms, Barcelona let his contract run down. As of July 1st, despite the club having an agreement with the player, Lionel Messi was a free agent. This meant that he had to connect with the club contractually. If Barcelona were to sign him again, they would have to treat his arrival as a fresh transfer as a free agent.

The story further adds in a new character at this stage: The European Super League. It is old news that Barcelona, Real Madrid, and Atletico Madrid, alongside other elite European clubs, announced the start of the ESL as an autonomous tournament last season. Though the project fell apart days later, the two big Spanish sides did not keep the admiration of their idea a secret.

Covid had a huge role to play in loosely held rules in the 2020/21 season. Leading into the new year, however, Javier Tebas, president of La Liga, had his own concerns over the biggest sides departing the league to join a personal venture.

All factors combined, a fixed salary cap was stringently implemented that had to be met at all costs. No new player could be registered if the wage bill exceeded the limit, and Barcelona’s No.10 was technically a ‘new signing’.

The numerical aspect of the story

La Liga has set the wage limit for Spanish clubs to be 70% of the revenue generated by the team. FC Barcelona’s wage to revenue ratio was at 115%. To put that in words, for every €100 the club generated as revenue, it required an additional €15 to pay off player wages.

Lionel Messi was undoubtedly the side’s highest earner. However, even without his salary, Barcelona’s wage to revenue ratio is at 95%, a whopping 25% above the League limit.

One must remember that this is without considering the players with whom the side has a contractual obligation but who are unregistered, like Sergio Aguero, Memphis Depay, Eric Garcia and Emerson Royal. Despite being players of the club, they are yet to be registered.

Barcelona, at this point, knew they could come to regret not renewing Messi’s contract while he was still their player, though that wouldn’t be easy financially.

To make the deal possible, Laporta had to finalize player sales. However, after weeks of work, they could only finalize minor departures like Carles Alena and Junior Firpo. None of the heavyweights were ready to leave for a lower wage, nor were clubs interested in signing them. Not even a 50% wage cut offered by Messi himself could fit into the regulations.

The final chance came when La Liga reached an agreement with CVC to pump in 2.7 billion Euros in exchange for 10% of the League’s rights. If the deal was accepted, Barcelona could sign Lionel Messi and register the new signings without any hurdles.

However, the Board were against this proposal because they valued the possibility of the Super League over a single player. Agreeing to the CVC deal would crash all hopes of a future Super League, and Joan Laporta decided it was better to let go of Lionel Messi in exchange for a competition that did not yet exist.

Well, surely Lionel Messi could have played for free, right, at least according to some fans. In blunt terms, no. He couldn’t have done that.

For beginners, even with him playing for free, Messi could not have been registered because the wage to revenue ratio was still 25% higher than the permissible limit. Moreover, he was the last in the line as he was a free agent.

Most importantly, it would be legally impossible. The general Spanish employment law has stated that any new contract, by Spanish law, is required to be a minimum of 50% of the previous wage. This law is precisely to avoid financial manipulation.

To face it, Lionel Messi literally did his all to stay at the club. 50% wage reduction is the least he could legally offer to reduce his salary, and he went all the way. If the club still could not sign him, it was purely because the club had let him down by mismanagement.

Needless to say, asking the best player in the world to play for free is shameless in itself. Lionel Messi may be a billionaire, but to ask him to perform an act of charity when players who do not step on the pitch receive atrocious salaries is humiliating.

To summarize, this was the only way. For the sheer number of factors that led to this situation, it appears fabricated and scripted. It is heartbreaking to see Leo separated from the club he loves, the only club he has ever known. However, he gave his all to stay, and one has no right to question his loyalty to the club.

The greatest player to have graced the game provided Catalonia and Cules with incomparable joy for over a decade, and we should be thankful for every touch he took with his magical feet. As he leaves the club, we must bid him farewell with that very love and with gratitude for being the reason for our happiness.

He said that he gave it all, and he was right. This was the only way for the story to end.