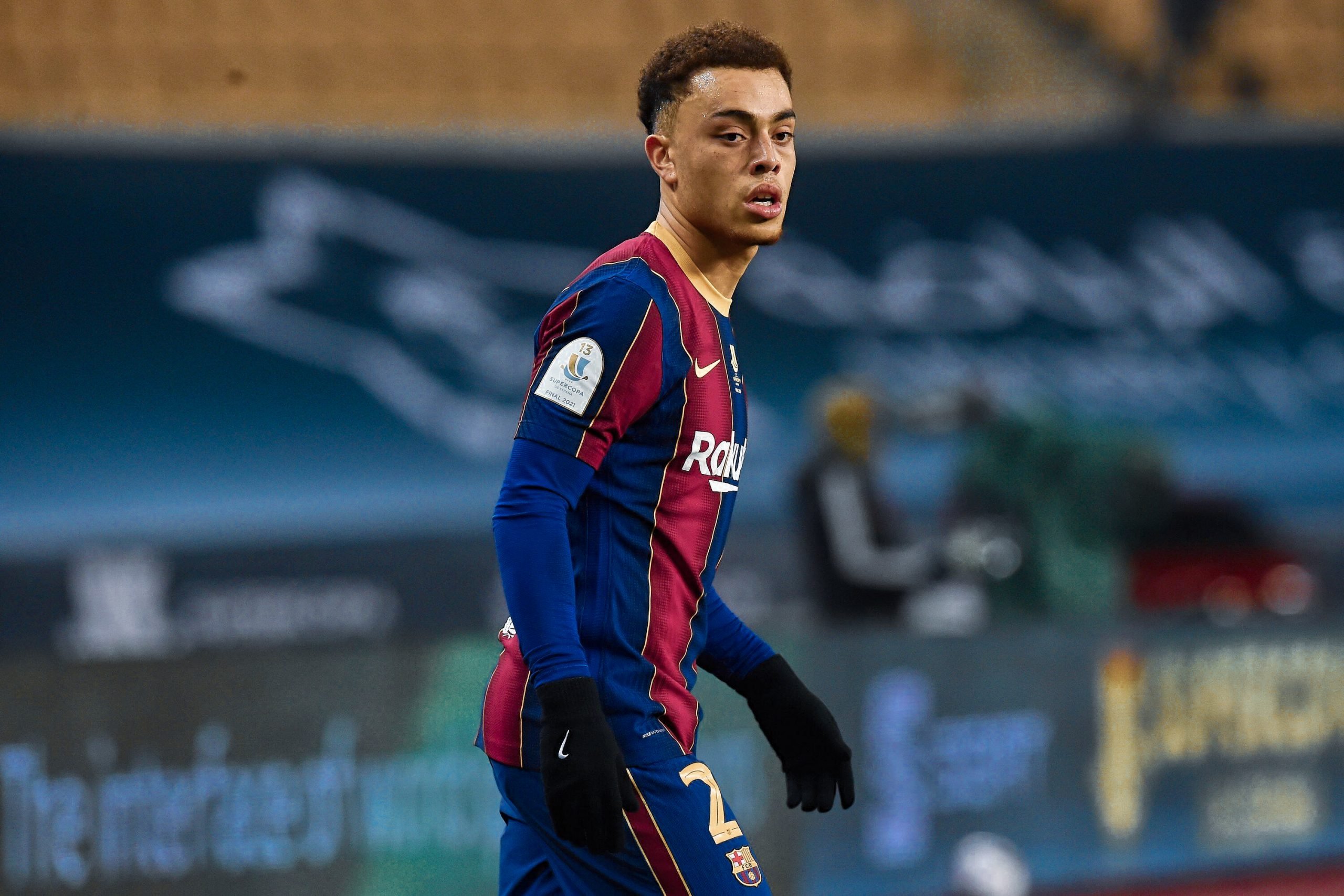 Playing for FC Barcelona is no walk in the park. Whether an established superstar or promising youngster, expectations are sky-high and there is little room for error. This is especially the case when you are playing a position that has been underwhelming for multiple seasons.

This is the situation Sergiño Dest found himself in last summer. After choosing to join Barça over Bayern Munich, he was propped up as the heir to Dani Alves’ throne. On the other hand, some were cautious with their expectations, given his lack of breakthrough success at Ajax.

After scoring a brace against Real Sociedad last night and being in overall brilliant form over the last few matches, Dest is living up to lofty expectations while proving all doubters wrong. As such, how can Barcelona continue to get the best out of him?

Dest came in with a thankless task on his hands. Consequently, many of his performances were (unjustly) criticized. Cúles have come to expect a certain level of output from the right-back spot ever since Dani Alves left in 2016. For years, Alves was the best player in that position, and he remains one of the greatest of all time too, and the hole he left behind was unfulfilled. The Brazilian could dribble past anyone on his day, his deliveries and entries into the final box were world-class, and he was a powerhouse on the defensive end.

Sergi Roberto was an admirable replacement, but he lacked the flair and natural ability of his predecessor. Furthermore, Nelson Semedo’s stint was, unfortunately, subpar. Despite having only one full season of top-tier football under his belt, Dest was expected to immediately perform and at least provide competition for the right-back position.

It goes without saying that a player needs time on the pitch in order to improve, and that’s often hard to find at a club like Barcelona. Nevertheless, due to injuries and rotation, Dest has had plenty of playing time this season. In fact, he has the tenth most minutes this season, and he has appeared in 32 matches.

First-choice RB Sergi Roberto’s season has been marred by injuries, which has given Dest crucial experience. As such, his development has undoubtedly benefited. It has been precious time for him to develop chemistry with his teammates and adapt tactically to playing in La Liga and with Barça.

Up and Down Campaign

Dest’s Barcelona campaign has had its highs and its lows, but he is consistently trending in the right direction. He started the season at left-back due to Jordi Alba’s injury, showing his versatility. When Sergi Roberto went down with a long-term injury in November, Dest took over his right-back spot.

His performances were often solid but equally under-appreciated. He performed extremely well in his first El Clásico, effectively shutting down Madrid winger Vinicius Jr., but the team’s 3-1 loss overshadowed everything. That became a recurring theme for the young American, where his performances were overshadowed by the team’s defensive inefficiencies. The Catalans’ error-prone defence also exacerbated his positioning, which admittedly leaves some to be desired.

As a player, he has the ability to defend one-on-ones using his pace and smart tackles to dispose off opponents. However, he has been caught out of position on various occasions. Offensively, he has gifts that Roberto and Semedo lacked: a natural flair in the offensive third with a penchant for taking opponents on or shooting on goal.

He played well throughout late 2020, but injuries slowed him down in January, and it looked like fatigue from a congested season was getting the best of him. Things then reached an all-time low with the first match against Paris Saint-Germain, but in his defence, he did not play nearly as bad as people thought. In fact, he kept Kylian Mbappe in-check at times, but it was ultimately a lack of a team defensive structure that really hampered him. That match was a blow to his name, but he vowed to continue fighting and prove his worth.

A change in formation

Things took a turn in late February when Ronald Koeman decided to deploy a 3-5-2 (or 3-4-3) formation. This pushed Jordi Alba and Dest from their full back roles higher up the pitch, effectively turning them into wingbacks or wide midfielders.

Dest has absolutely thrived in this role, marauding down the right-hand side with pace, energy, and flair. He has a boatload of skill moves in his back pocket and is not afraid to use his freestyling abilities in the final third — a growing trend in European football. He offers a sense of unpredictability that the team has desperately needs.

Since Koeman has changed formations, he has hit the crossbar thrice – including once against PSG in the 1-1 draw – and topped off his brilliant run of form with a brace against Real Sociedad. In fact, in his six games as a wing-back, he has averaged over 1 shot per game. In his previous eleven games as both a right and left-back, he only mustered one shot in eleven games.

Other than boosting his offensive contributions, the change in formation has also helped Dest defensively. The 20-year old can now operate in more threatening positions up the pitch without sacrificing too much space. Any lapses in concentration or misplaced passes are no longer as detrimental because the right centre-back provides defensive cover. Furthermore, he does not have to exert as much energy moving up and down the flanks. Barcelona will surely continue using this formation, and that will help him fine-tune his raw offensive talent while also alleviating defensive pressure.

How can Barcelona get the best out of him?

First, in order to facilitate his development as a player, Dest has to continue playing plenty of minutes. He has almost locked down the right-back/right wing-back role, but healthy competition and rotation with Roberto (or Emerson if he’s brought in) would only help the team. Fortunately, Dest has already played in plenty of big games this season.

Another key is to continue utilizing him as a wing-back. The team has performed extremely well in the 3-5-2 or 3-4-3 formations, so that hopefully means Dest will have more time in that role. As such, he will get even more comfortable on the offensive end, expanding on his raw dribbling and improving on his final deliveries into the box. It will also let him thrive without exerting too much energy, thus he can press with higher intensity. Dest’s can continue making strides on the defensive end because there won’t be as much pressure on him.

In all, he is looking more and more comfortable on the pitch with each match, and he is expressing himself to the fullest.

Overall, Dest is in a perfect situation for a developing full-back. His path to being a cemented first-team starter is clear as day, and he is in a set-up that allows him to expand his strengths while improving his weaknesses. His future is as a full-back, but playing as a wing-back/winger will help him develop even quicker.

After years of searching for Dani Alves’ heir, or at least the heir to the right-back role, Barça are extremely fortunate to have Dest. There are dangers with getting carried away with immediate expectations, but he has all the pieces necessary to excel.